What do you yhink about my last work? 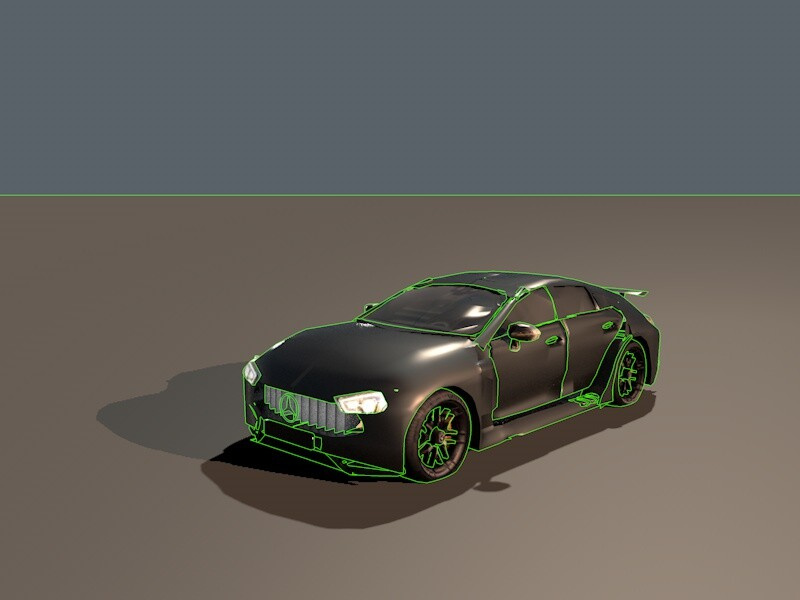 Here is my last work,Mercedes AMG GT63S,
is it good for presentation at Game Developers? 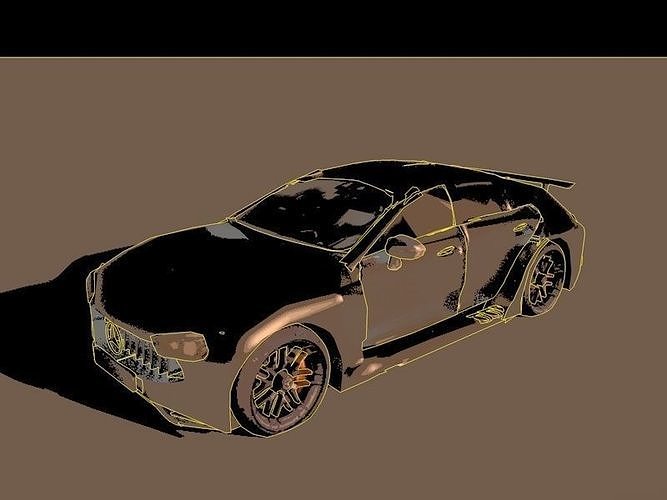 It’s not a bad start, but it’s not even close to being finished. There are a number of fairly obvious issues.

TIP: If you’re going to model exclusively with perspective enabled, see if you can match your camera settings to those used in the photo. Default FOV and such for 3D cameras tend to differ from real world cameras. Matching settings minimizes potentially odd distortion and makes it SO much easier if you want to integrate your finished model with a photo plate.)

My opinion? If you remove the branding, rejig the body design as to make it seem LESS like somebody else’s, finish it properly… THEN it might be worth putting up for sale and buying, depending on topology and poly count - of course.

Not sure whether you’re being extremely naive asking for critique after the fact or simply just taking the piss…but yeah, either way please do take it down and save yourself at least the embarrassment of assigning a laughably overpriced cost for which seems at a glance, an hour or two worth (…if that!) of ‘work’ outputting a less than favorable, outcome.

Now on the other hand, if indeed there’s a shred of seriousness here?!

Then a few points to keep in mind generating class A authored content, for realtime environments:

Lastly, from memory spanning 16 years as a 3D Artist. I recall just two instances where automotive manufacturers sought legal recourse against 3rd party publishing of their individual protected IP but for clarity’s sake both defendants were high profile entities with very deep pockets.

So, at the end of the day, responsibility still falls upon a given artist if they so choose to flout copyright law respective too their jurisdiction, regardless of a widely accepted presumption:

I don’t think that it’s either. He’s got an ArtStation portfolio full of this caliber of work that dates back as far as a year. This is not a joke post and I feel that he’s very serious about showing off his stuff. It’s clear that he’s proud of his accomplishment(s), but you know the story:

He either doesn’t get/request serious feedback, only gets “great job” responses, doesn’t take direction, or thinks that he knows better because nobody “gets his style.” Alternatively, it could be an issue of somebody who feels this raw sense of achievement and personal growth, but can’t see his work for what it is compared to what else is out there. Consequently, because he feels super awesome, he overvalues his work and believes that it deserves validation on a level not yet reached.

I can relate because, some 26 years ago, I applied for a job at studio in Texas. I got called in for a phone interview and thought that I was the s-h-i-t shit. Totally.The first words out of hiring manager’s mouth were, “So, yeah. I’ve looked over your portfolio. What exactly is so special about your work?” I felt crushed. I was so proud of my work that I was blind to the sort of competition I was really facing. I was totally out of my depth. Completely and utterly. It was a nice splash of cold water and dose of reality that forced me to take a step back and work even harder to improve. If I didn’t have an objective eye before, I certainly grew one after that.

Generally, the problems with the OP’s stuff are pretty simple.

I sense, perhaps, that he’s in dire need of a breakthrough. We’ve all had them. You’re learning and progressing, but the curve reaches this plateau at some point. You might not grow much for weeks, months, or even years. Then, suddenly, something finally clicks and you hit this amazing growth spurt.

Practice makes perfect, but it really does takes a “eureka” moment sometimes to drive you forward past your personal wall. Unfortunately, there’s no telling what his breakthrough moment will be. It’s different for everybody. For me, it was the moment when I decided to fiddle around with real clay. After, I could finally understand the connection between the digital tools and the traditional concepts that actually birthed them.

I don’t think that the OP is trolling the board. I don’t. Seriously. He’s been at it [CG] for a year plus now. That’s one helluva long game for a troll. Too long. He’s on the level. I just think that he needs more “real talk” feedback and a bit of a reality check to push him on the right path towards true mastery, or at least enough to where he could sell/show his work.

Lastly, from memory spanning 16 years as a 3D Artist. I recall just two instances where automotive manufacturers sought legal recourse against 3rd party publishing of their individual protected IP but for clarity’s sake both defendants were high profile entities with very deep pockets

After 24 years on these forums, I lose track of what thread was where and on what site. CG Talk. Polycount. Cubebrush. It all sort of blurs together at some point. I do know, however, that there have been numerous incidents where people have had such models yanked from online markets. Naturally, it’s all anecdotal, but reports of this behavior is not all that uncommon. Whether it’s the market removing them out of an abundance of caution or they received DMCA take down requests, I don’t know. Either way, it all come down to IP. My take on the whole matter is, if I didn’t make it or it doesn’t pass the fair use “sniff test”, I’m going to try and steer clear of it. Better safe than sorry.

Ok fair enough, may’ve jumped the gun a bit with my accusatory tone, although to be honest it’s not unreasonable to suggest that the same could not be said if posted 10 or so years ago on this board.

I’d dread to think of the ‘feedback’ the OP might have attracted then…just say’n.