Here’s where you’ll be sharing your Week 2 WIP assignments! Be sure to take a look around at others’ works and offer helpful feedback if you can.

Don’t forget to watch the lecture video for Week 2 on Sketches Design Composition here - make sure you’re logged in in order to view the video.

The Week 2 webinar will be on Sunday, Nov 18 @ 7pm PST. We changed platforms to ensure better quality, so please sign up for the webinar with the new host here! 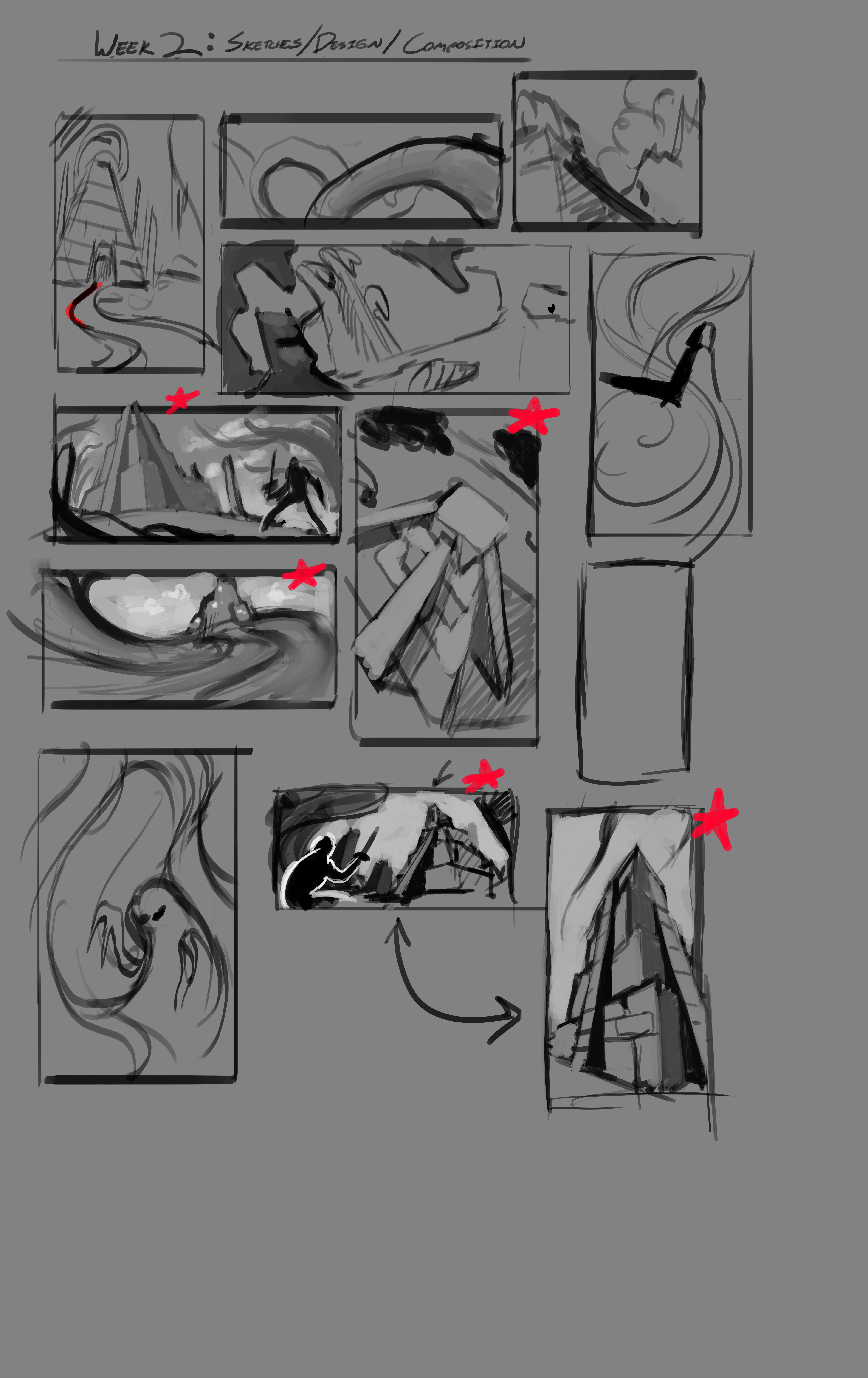 for the thumbnails I decided to block things in in 3D because for me this is one easy and extremly fast workflow to explore camera angles and compositions. I thinks tools don`t matter at all in this stage, sometimes I work in 2D.

The Image will show a lost city that was once full of life located at a coast populated with fantastical sea life. At some point in history the ocean dried up and left behind a bleach desert so the city was abandoned.
More than 5000 years later, in the 1920s, the place is rediscovered and becomes the largest and most exciting archeological site in the world. But is it really abandoned or is there something lying in the sand waiting to arise again from the deep. 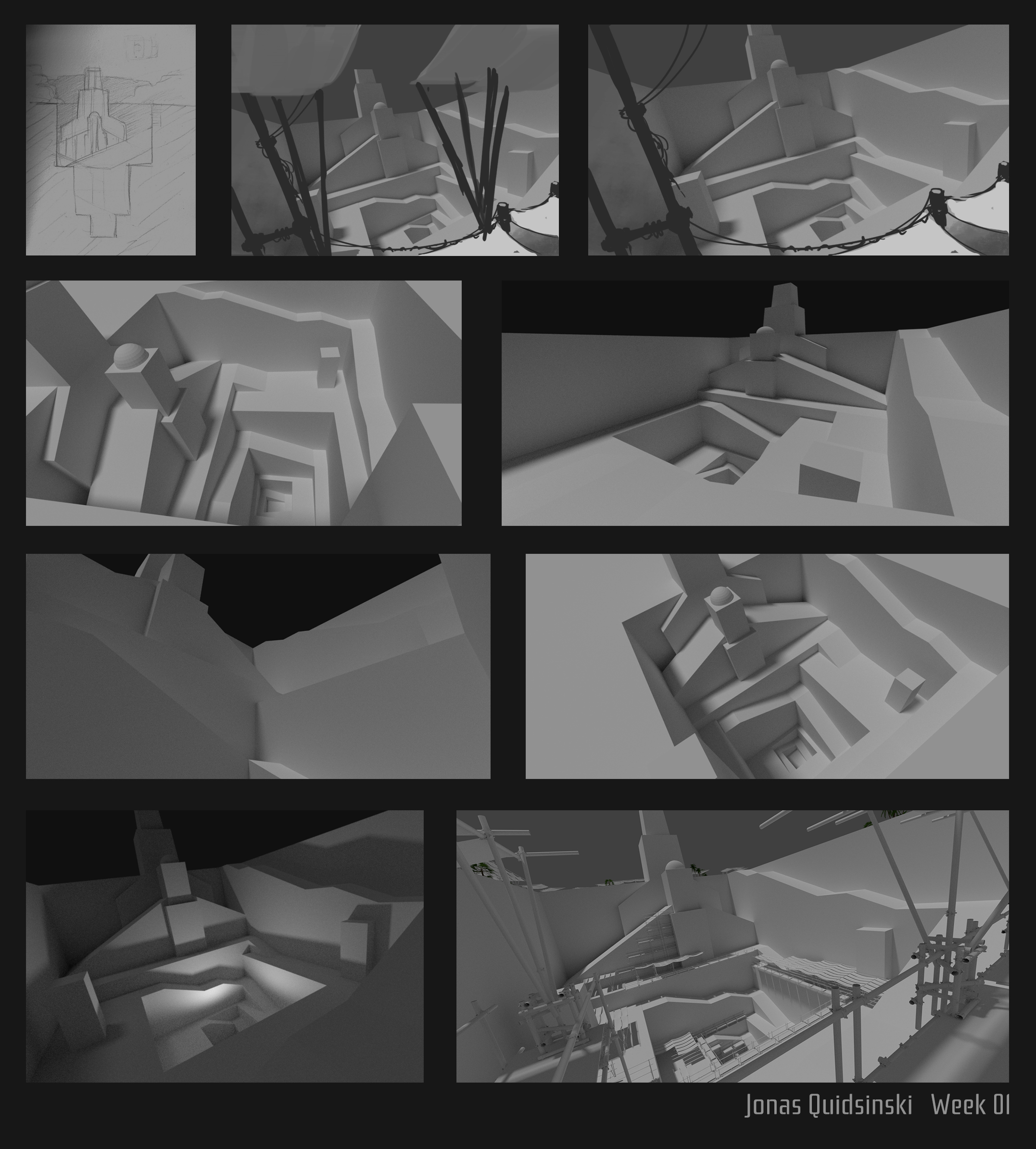 The way you did the thumbnails is very interesting. Just a pair of questions (cause I’m actually learning some 3D), wich software do you use? And wich lightning engine?? I’m learning 3Ds Max, but I don’t know if it would be better to start with Maya or it doesn’t matter at all. Thank you!

Your thumbnails are awesome, and I kinda have a follow-up question to Hoppie’s.
What workflow did you use to create all of those? I currently work in Blender 3D and I can’t imagine that being particularly quick to do (sculpting or modeling), but maybe I’m just going about it the wrong way.
Thanks for sharing!

I use Blender for hardsurface modeling/ composing and render in Cycles. These are totally personal preferences, Max just felt a little chaotic to me when I tried it, with lots of redundant buttons and a lot of similar modifiers and stuff kind of like a thousand years old library that has never been cleaned up (not to say that all these functions are useless but not needed for my purposes). I do think though that Blender is a very strong modeling solution and I can model faster in it than I can in Max, although I miss the abundance of plugins for 3Ds Max, particularly Itoo softwares ForestPro and Railclone.
There are some usefull addons for blender to speed up your concepting workflow. The ones I like the most are HardOps and KitOps.

Render engine doesnt really matter because I´m not trying to render a final beautiful Image or even a Sequence where I would have to optimize rendertimes. Physically based rendering is nice to have though. And of course realtime feedback on the lighting is nice, I know that keyshot has it and Cycles has a realtime progressive rendering as well, its probably default nowadays.

For softsurface modeling I use Z-brush wich is I think the best solution for sculpting although there are good alternatives. Blender does just fine at sculpting for example. I cant speak about Maya because I havent tried it.

About the modeling speed: the base model for this scene is just mostly made out of a few cubes and booleans, very quick and rough. the more detailed version on the lower right took a few hours to create. Both are definetly slower than throwing down a few expressive brushstrokes in 2D. Thats why I would recommend to find a basic design in pencil before you go to 3D.
But once you have a model it`s very easy to test out lots of camera angles, lenses and lighting setups from it. Even if you are not a master of perspective. Drawing the detailed model in proper perspective would probably take me longer than just modeling it, besides my digital drawings look kind of ugly.

Thanks @JonasQuidsinski! -and thanks (especially) for the addon suggestions too

I’m going to have to try this later today, its a really good idea.

Hi, I am focusing more on the story telling and design rather than dynamic composition and flow ( I still tried to keep some ) I was trying to show the moment when my character arrives at this tavern in the field to get some rest, the tavern itself is some sort of field version of oasis for travellers.

I was trying to really have fun and experiment with my thumbnails and I fount this part to be very useful. I usually start with some sort of image in my head and this time it was really cool to just experiment, I do now have a much better understanding and wider range of ideas for my future pieces.

Here is some short thoughts I had during my work
1 - was trying to show more of whole tavern area with high angle
2 - was focusing more on the flow, dynamic and composition rather than story and design just for the sake of trying it, looks quite awesome but I want to show more of tavern design.
3 - is similar to 1 but with even higher angle, after I finished line art and realized that it could be a really nice production drawing.
4 - is more dynamic low angle, also made it more of a night scene so I could use light to flesh out my character more. It’s a cool piece but I felt very limited in terms of space (I couldn’t fit all of my other little buildings)
5 - is just a fun experiment with an interior point of view.
6 - is probably my second favourite piece, it’s a better version of 2 with more space for tavern design. Also moody lighting makes it quite cool story wise.
7 - is the one i liked the most as it just shows I wanted to show, design of tavern and other buildings, character arriving and fields to show tavern isolated location. Also tried to have some flow using clouds and roads.
8 - funny that it was my first image in my head when I was thinking about this piece. I thought it would be the best one and if I didn’t do thumbnails sketches I would probably just tried to stick with it.

Any critiques or thoughts are more than welcomed 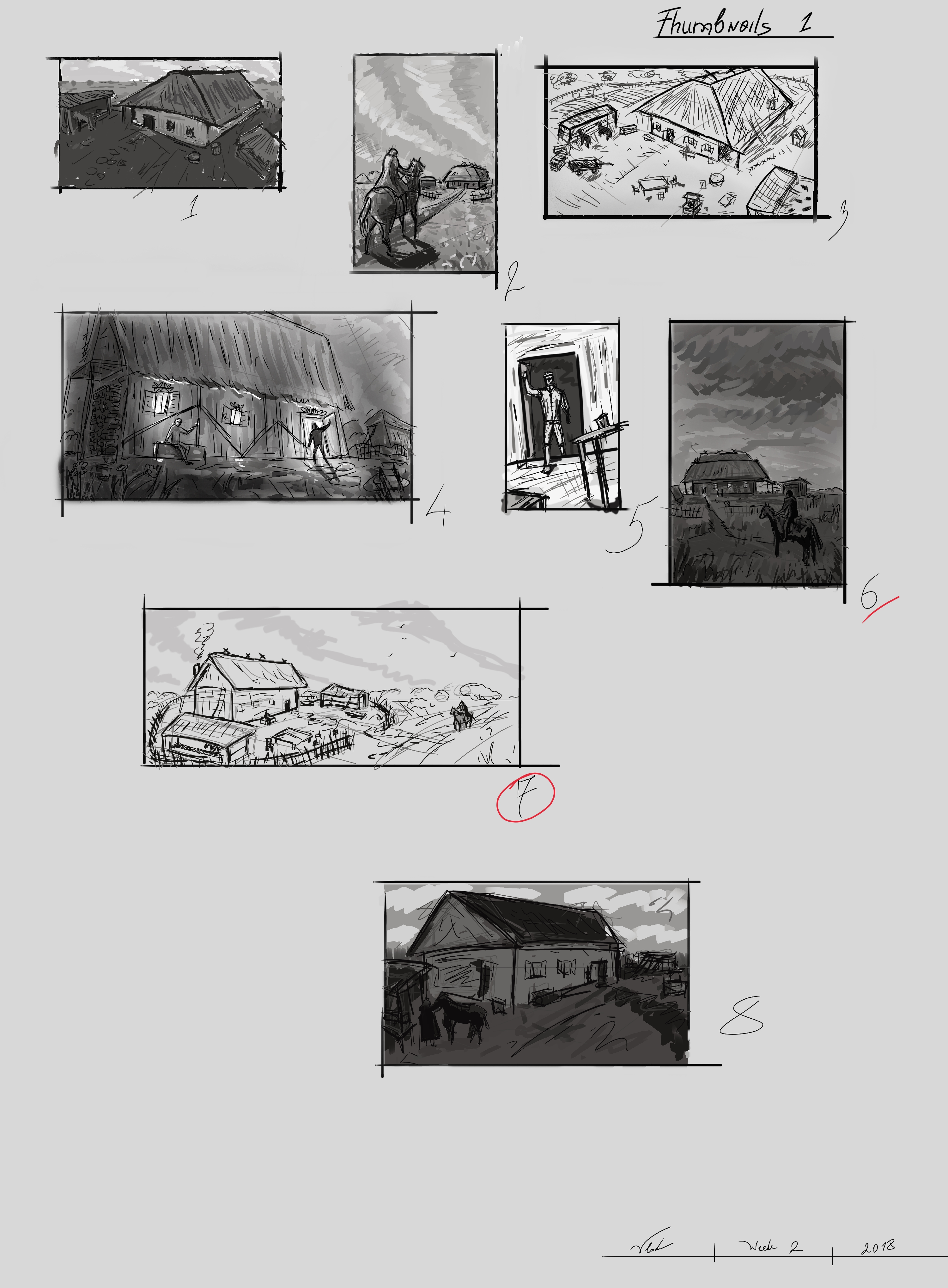 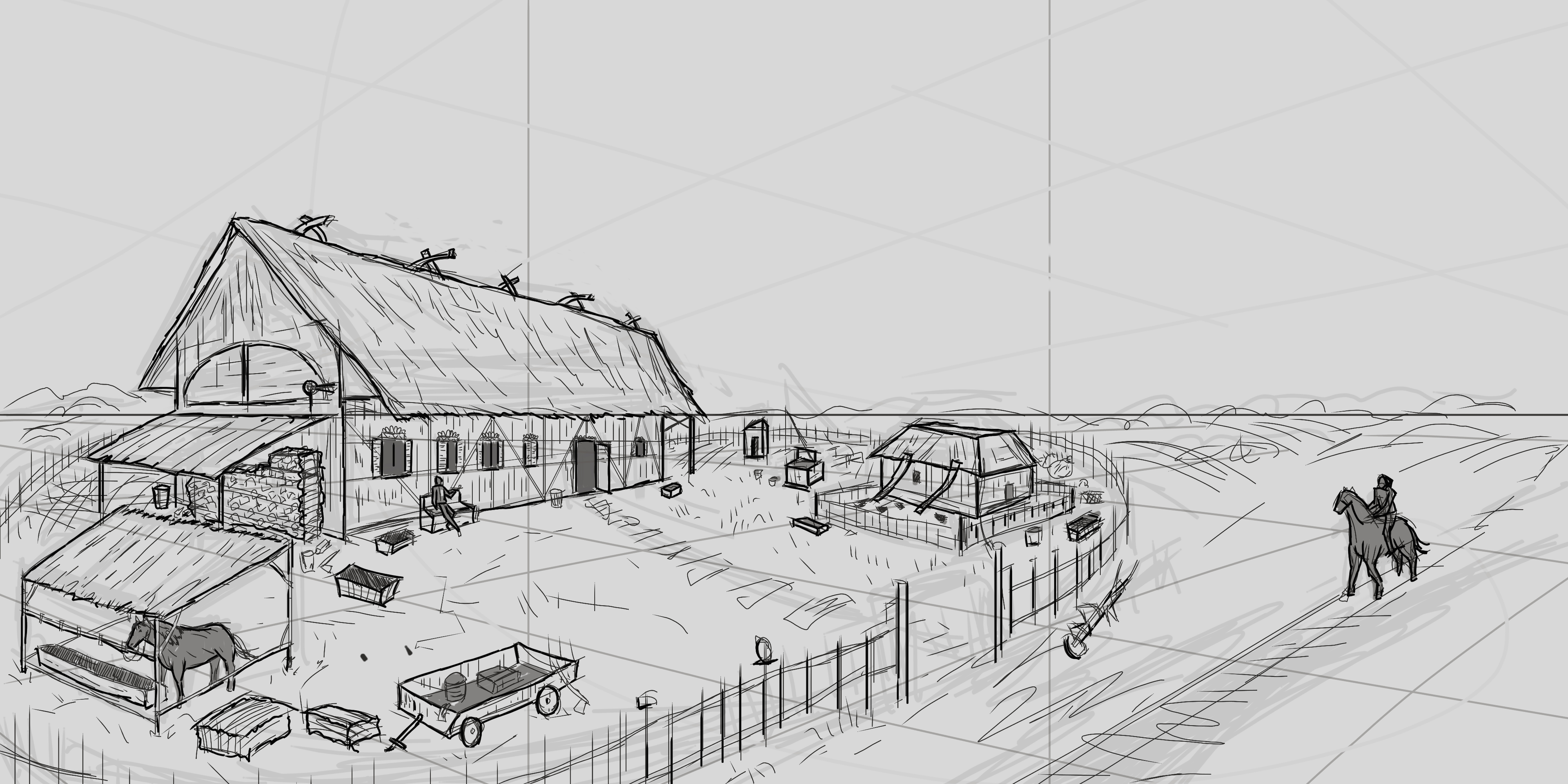 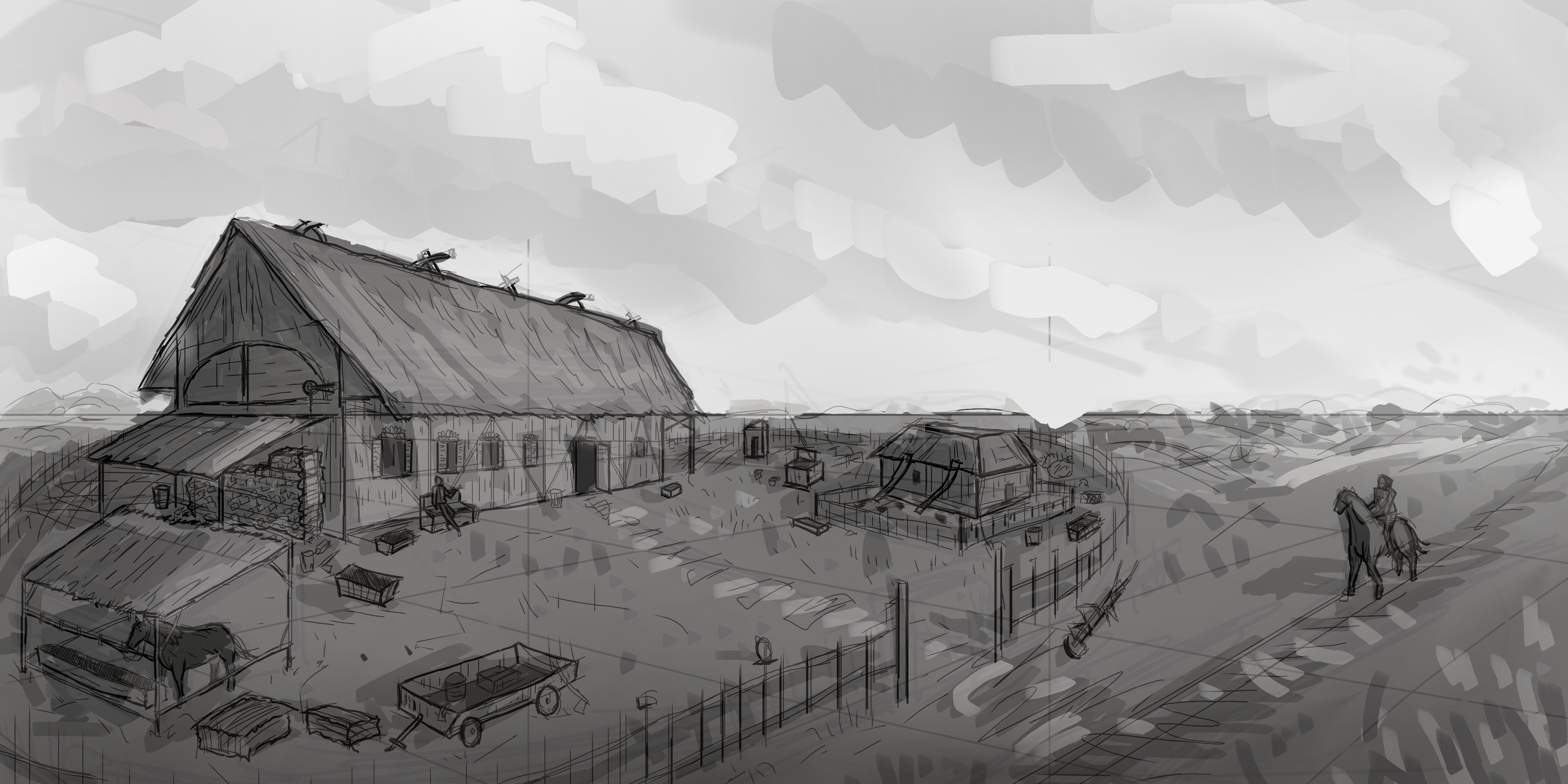 I’m glad you did that because this was exactly what I was thinking about doing for mine as I’m way more comfortable using 3D software since I’ve not done actual drawing in years besides this class. It’s refreshing to see someone actually do this for sketching because I’ve honestly always considered trying this approach for drawing something and then using the 3D sketch as a reference to paint on later to bring it back to a 2D art piece. Thanks!

I really like the low perspective near the ground (1,3) but I haven’t decided yet.
I think I will go with the first or last, but at the last the house looks very long what’s not desired…

Any hints or criticism is welcome =) 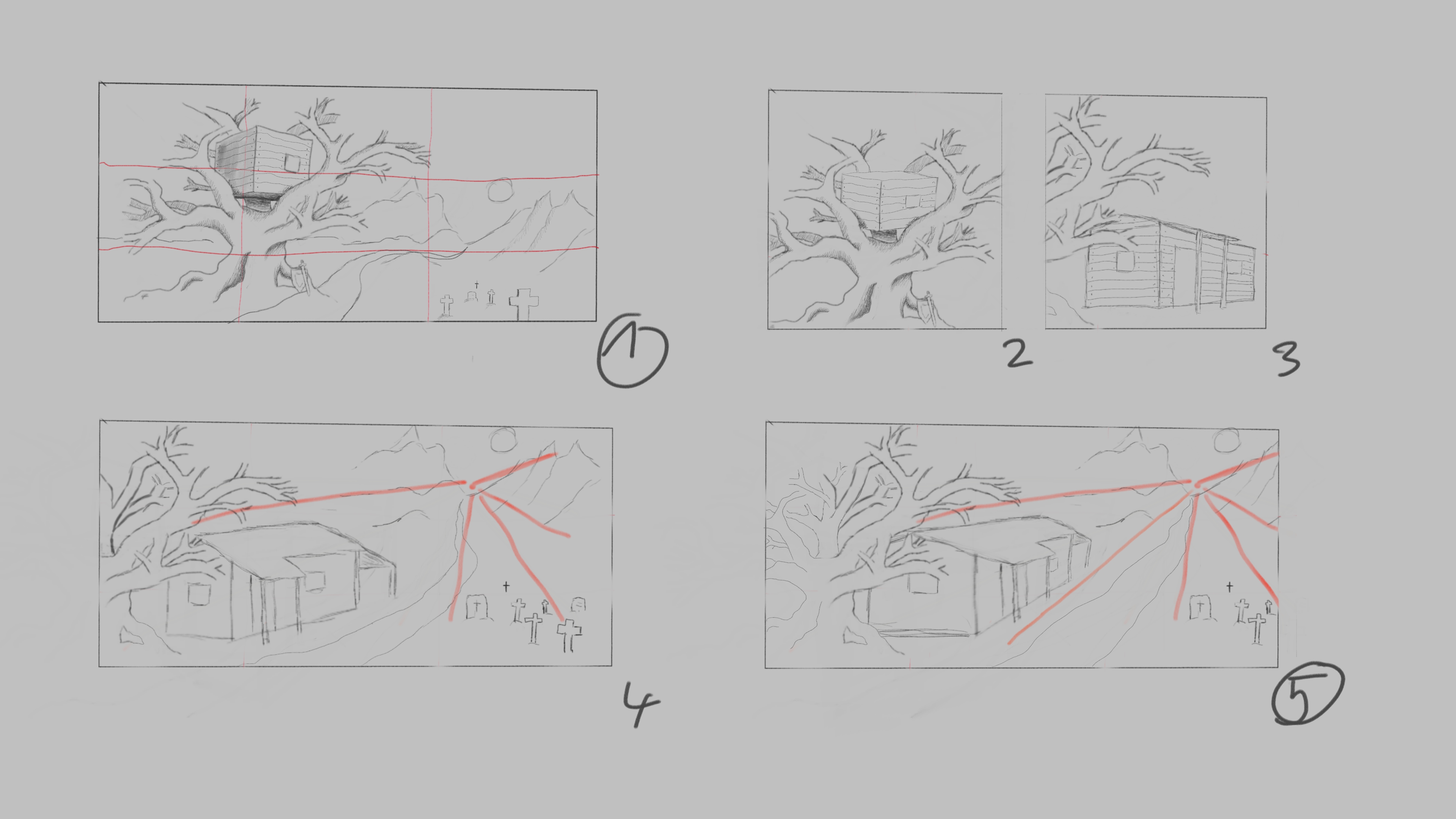 I liked the 1 design. But I think that mixed 1 and 3 can work, using the 1 composition but setting the road vanished point like in 4 but in the low right. Good job. (and sorry for my english

Wanted to post a WIP early to get some feedback.

I really liked the composition of the second sketch. I felt like it drew the viewers eyes back and forth between the two focal points, while maintaining a good balance in the image itself.
Here is my current sketches and partially finished linework.

What do you all think? 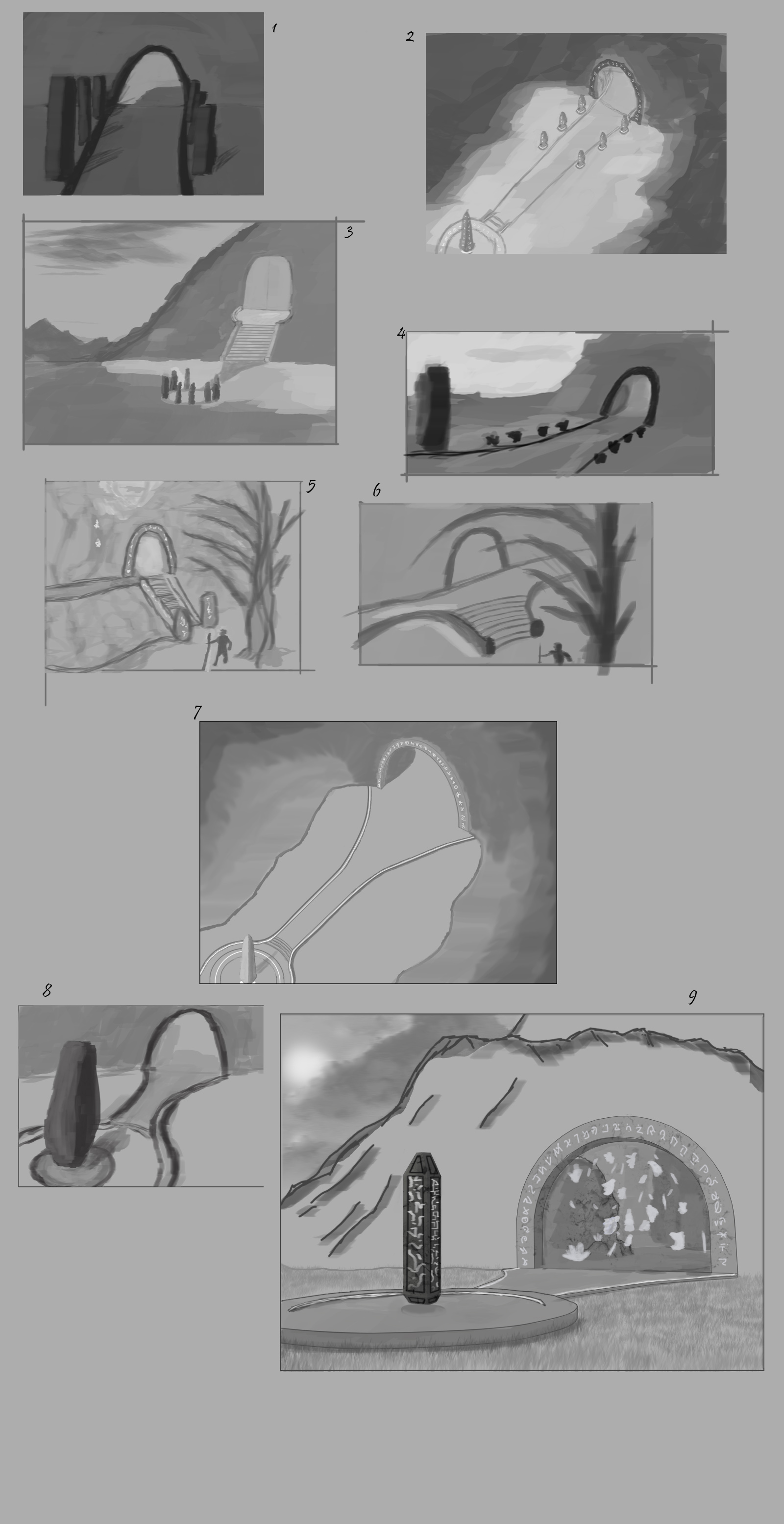 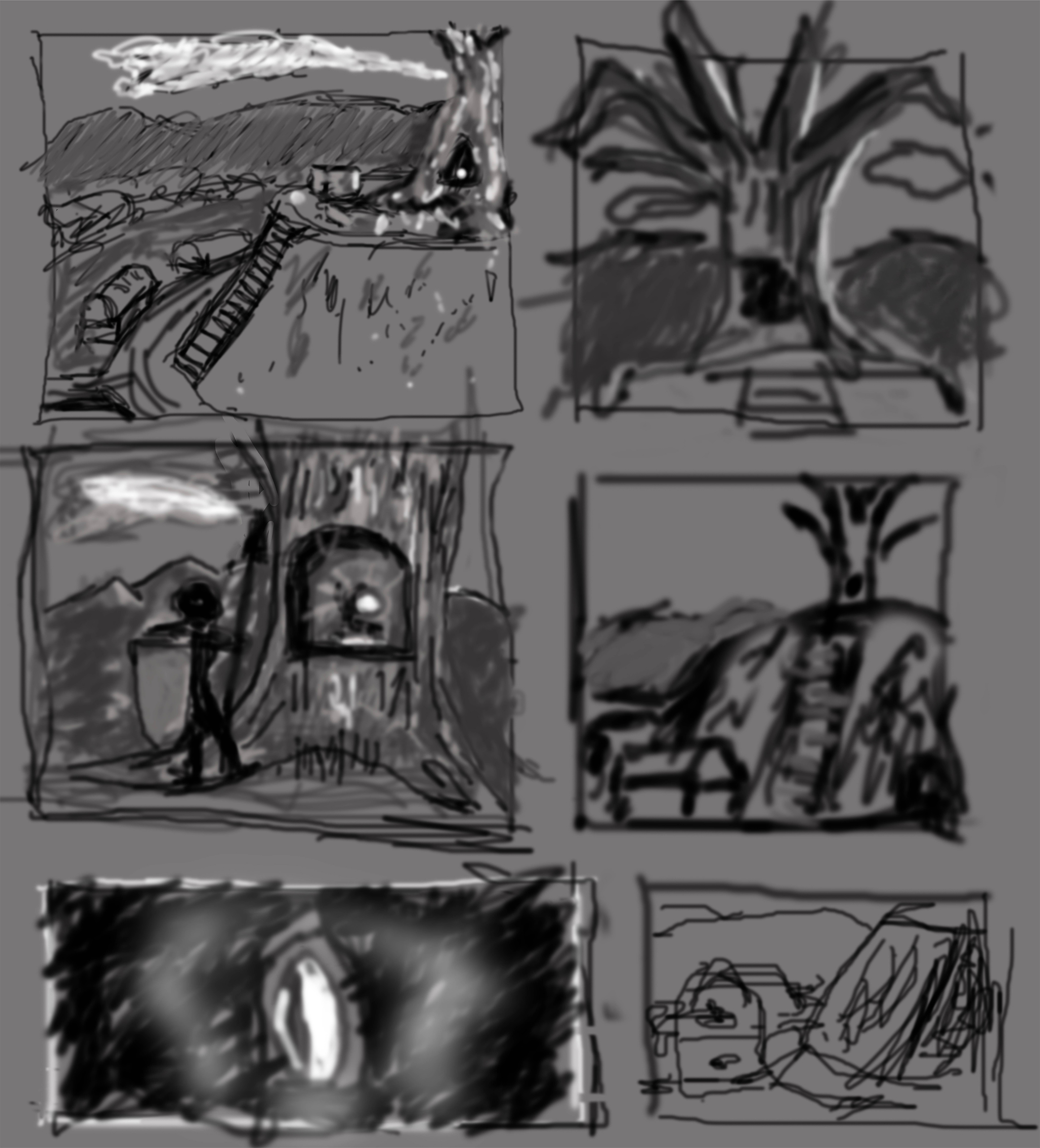 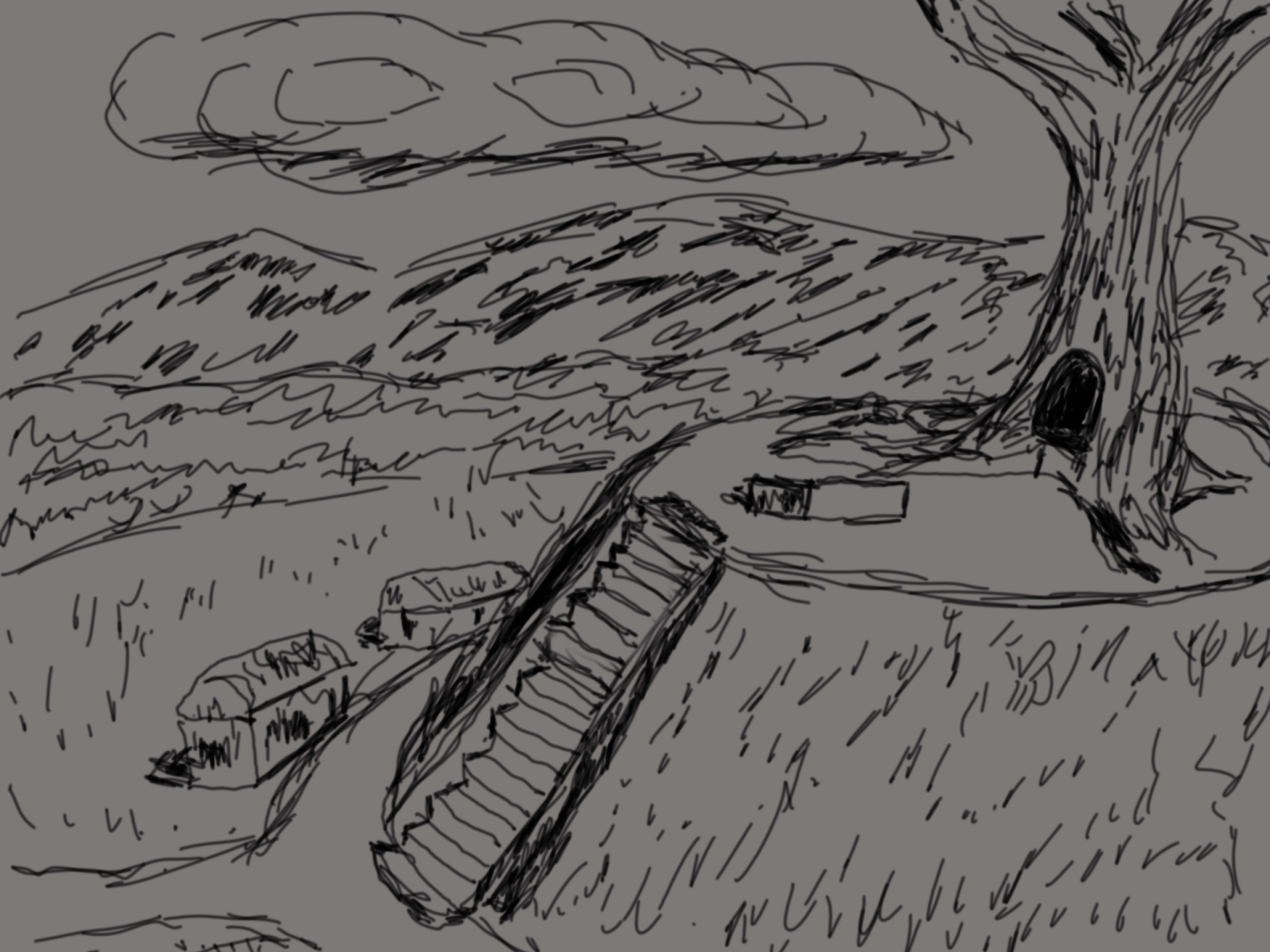 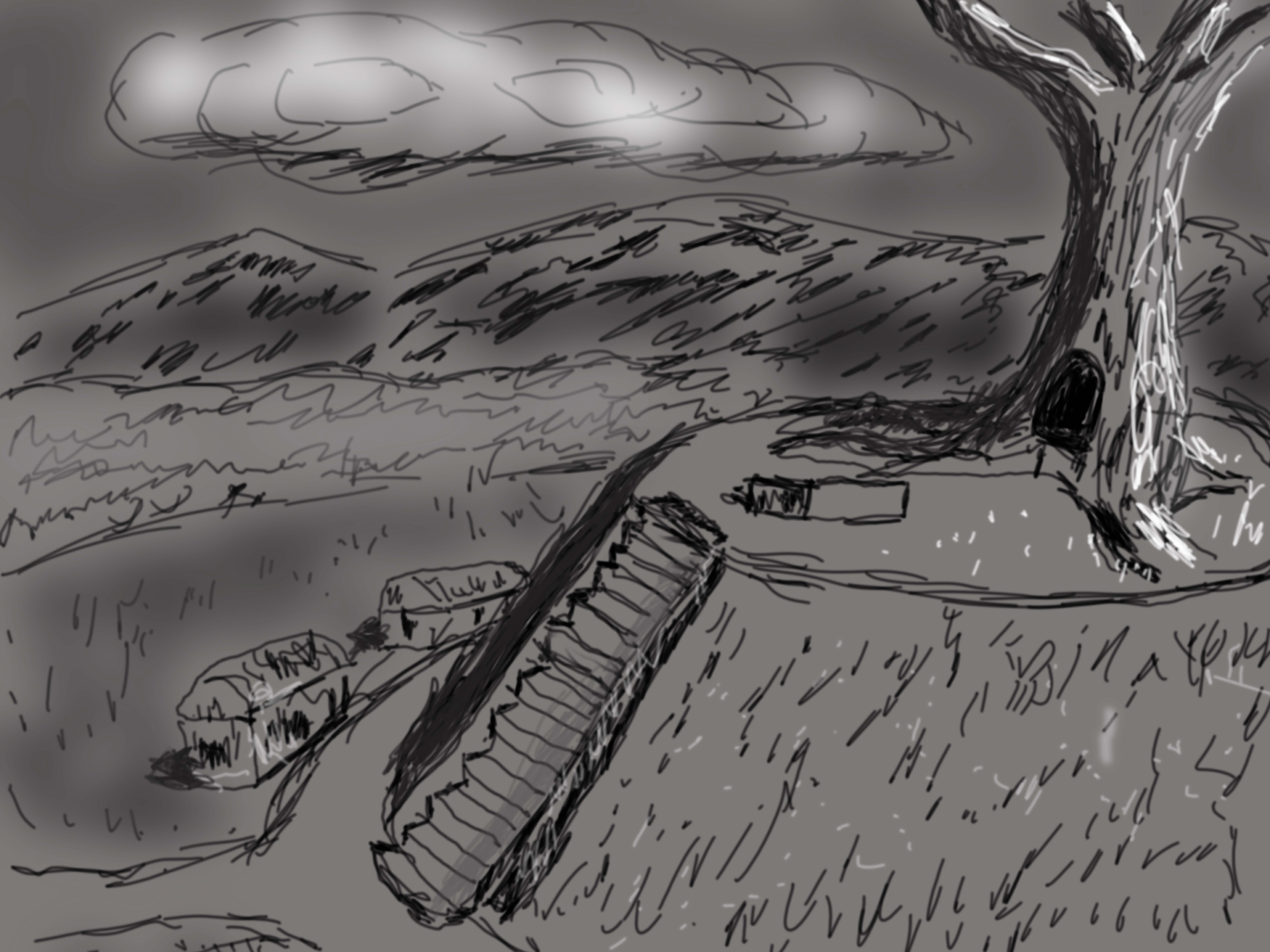 Little more behind why a tree as a temple. I have been told that a great flood covered the earth and there are many stories from all over the world’s past that supports this idea. These people in this tribe live before the great flood. This tree save the people who lived in the village by hanging onto it for the duration of the flood and they ate fish to survive during this time. The tribe believed the tree was a gift from their god and so in honor of their god they build a great mound and placed this tree on top of it. They place a jewel inside this tree and place food sacrifices at the alter outside the tree.

nice tavern you designed and its well drawn. I think though that the composition you chose to go with is not your most successful. The horizon divides the image ruffly in the middle wich can feel very stiff. Also Im not sure if the image is well balanced, you have all that visual weight on the left and only that tiny charecter on the right.
for these reasons I think the images 1, 6 and 8 look a lot better because you divided the images in an interesting way. 1 and 6 are also well balanced.

I like the secound from the top in the left column the one with the circle of stones. It has elegant flowing lines wich seem appropriate for this kind of ancient/ sacred place. Also it has clearity, it`s very clear what this place is. Maybe some foreground could be nice to give even more depth.
Im not quite sure why you would want to show the place from a birds eye view. You can of course do that if you have an emotional or storytelling reason but in this case I feel it flattens the image, because everything is in one plane and about the same distance from the camera.

Great that you explored these very different compositions! cheers!

@theoretisch: At first glance the treehouse concept seems more interesting than just a cabin next to a tree. The first composition is good. I especially like how you kind of aligned the moon horizontaly with the window of the treehouse and than aligned the gravestones verticaly with the moon. Organisation á la Mondrian, very cool!

Wonder if a mix between the one you mentioned and the one i started drawing would work. Almost like dropping the camera angle to about 50% the height is is now?

I see where Jonas is coming from, but I actually really like the structural integrity of the image you chose. The visual direction that the lines give the observer is pleasing to the eye.
I think that more detail work in seeing more location and object placement would be cool, more along the lines of what Jonas mentioned. Although I think you already figured out a good compromise with your camera angle solution

Thought I’d pipe in a bit, if that’s okay

sure you try that. Also please don`t get me wrong, the top shot you chose can potentially be very cool, I think personaly I would just love to see some storytelling reason for it. The first thing that comes to my mind are the assasins creed over the shoulder shots with the bird of prey. Or maybe there is a line of monks walking towards the temple similar to CDFs “Klosterfriedhof im Schnee”. 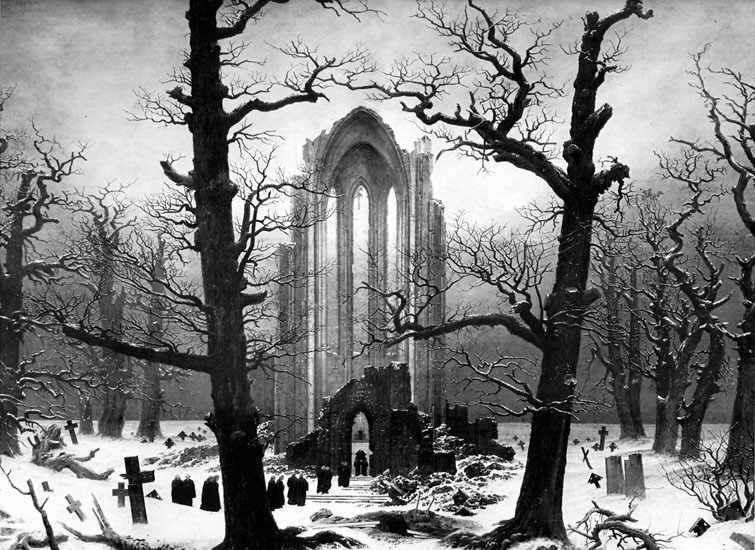 Thank you! helps bounce ideas off people and thank you for the reference!

Yes! Thank you for the response!