The Camera Around the Camera

I already know how to move cameras around, for static renders. Now I would like to learn how to make the camera circumnavigate my better looking models and produce an MP4 video.

This was my first -and only, so far- attempt:

TV Commercial of the Limo, in Blender 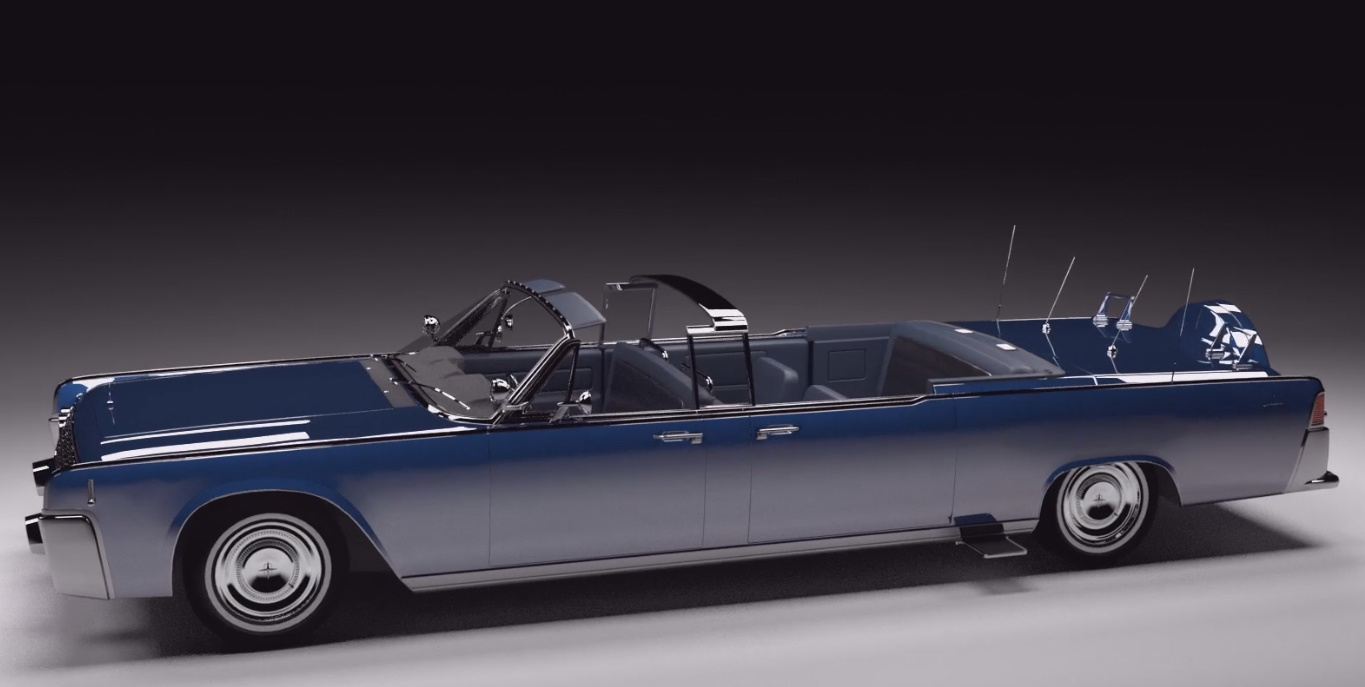 Problems: It was too expensive, too many polygons, took forever. Now I have decided:

I was told in another forum something logical: just point the camera to a point in the middle of the object. See below my first target: 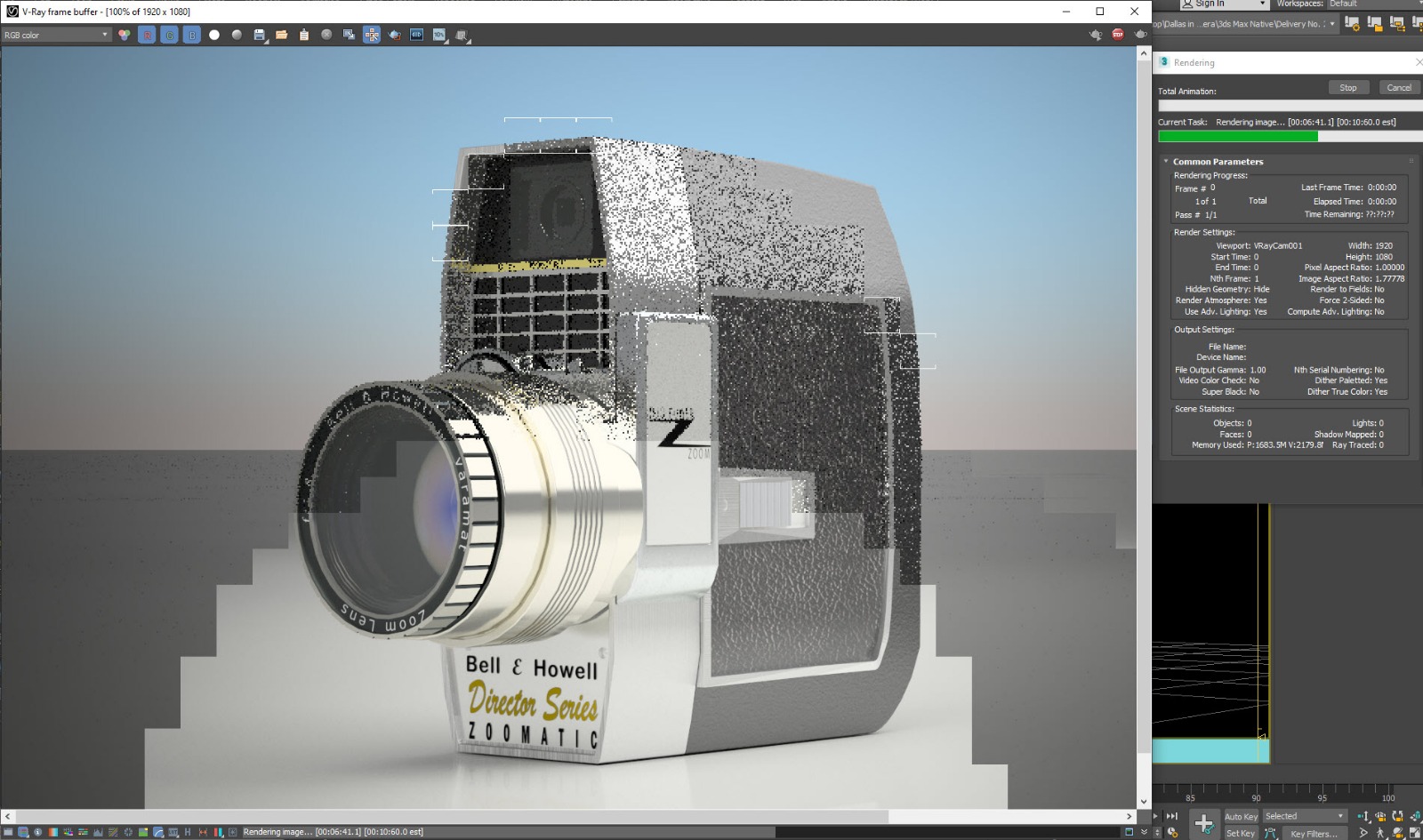 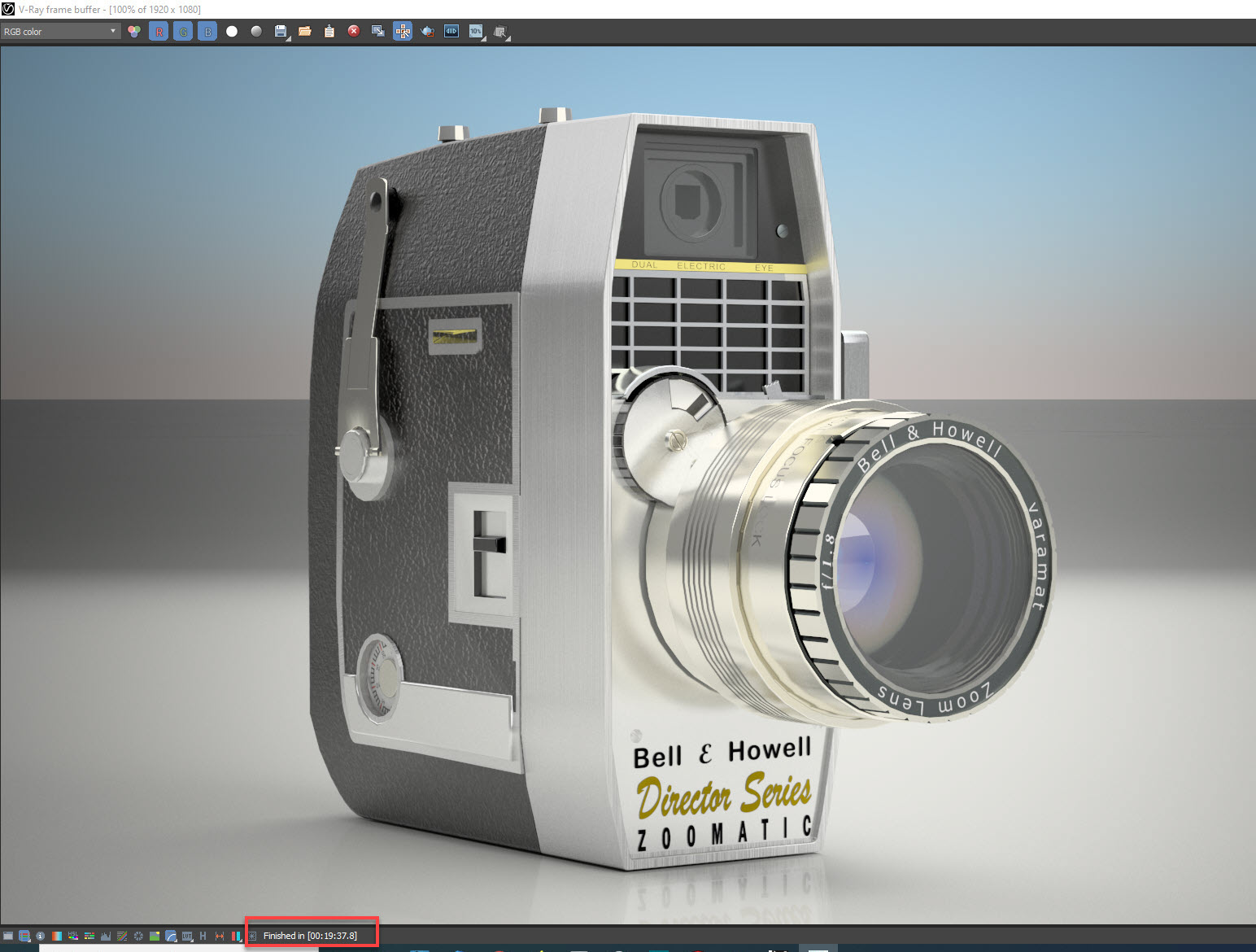 (*) Which is the proper designation? The term used in the industry? 360? Panoramica?

not sure i can answer your question… but i love your work. very well done!

ahhhh… the supposed camera that Zapruder used. One has to wonder.

not sure i can answer your question… but i love your work. very well done!

ahhhh… the supposed camera that Zapruder used. One has to wonder.

On eBay they sell that model. The closer the serial number to the real Bell&Howell, the more expensive.

Also: Some wise guy made an almost identical replica, with “old” FBI tags and everything and it is/was for sale. While he is not claiming to be selling the real thing, I bet that a buyer will tell that to their friends. 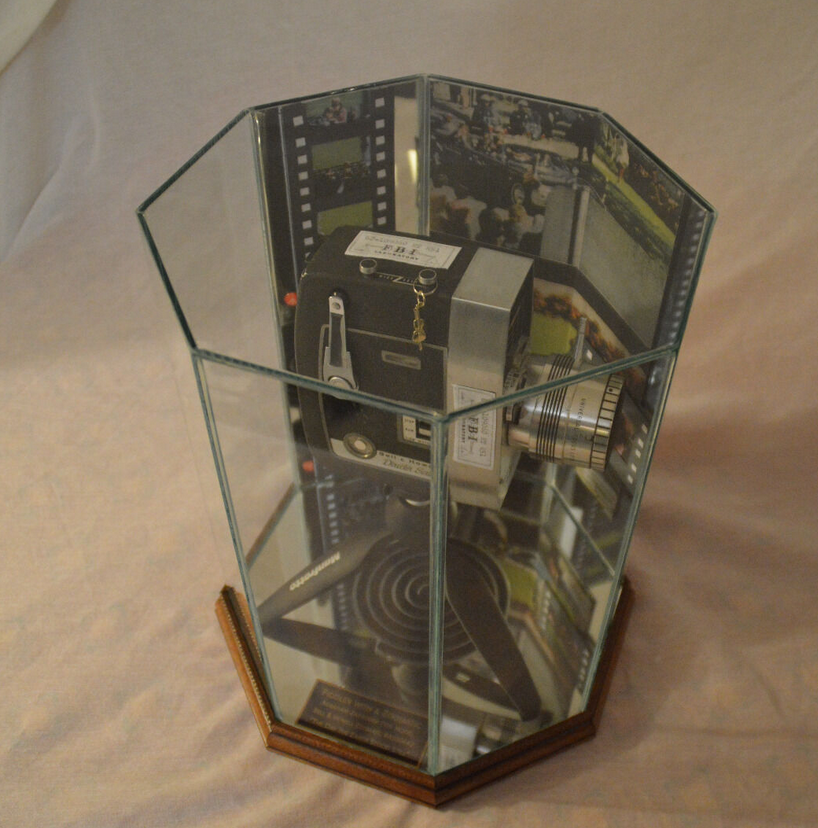 We are in desperate need for volunteers. The plan is to eventually donate the model to the National Archives. They already gave me the preliminary thumbs up.

National Archives?.. does this refer to the Fed Gov?

National Archives?.. does this refer to the Fed Gov?

The ones and only. They have all the documents related to the case, the released and the ones to be released in 2021.

For instance, I have been behind the limo blueprints for years. An officer told me: “We don’t have them”, another, “Yes, we do”. See below what they have sent me so far.

I have the two existent models of the limo: one from Hum3D and the other from TurboSquid, the former is in the project’s website, here:

The latter to be uploaded soon. Just got it.

Those measurements are not accurate. Paul Ernst, a friend from the Netherlands provided them, plus details like precise color and the middle jump seats, to the best of his abilities. You can see her in action here: 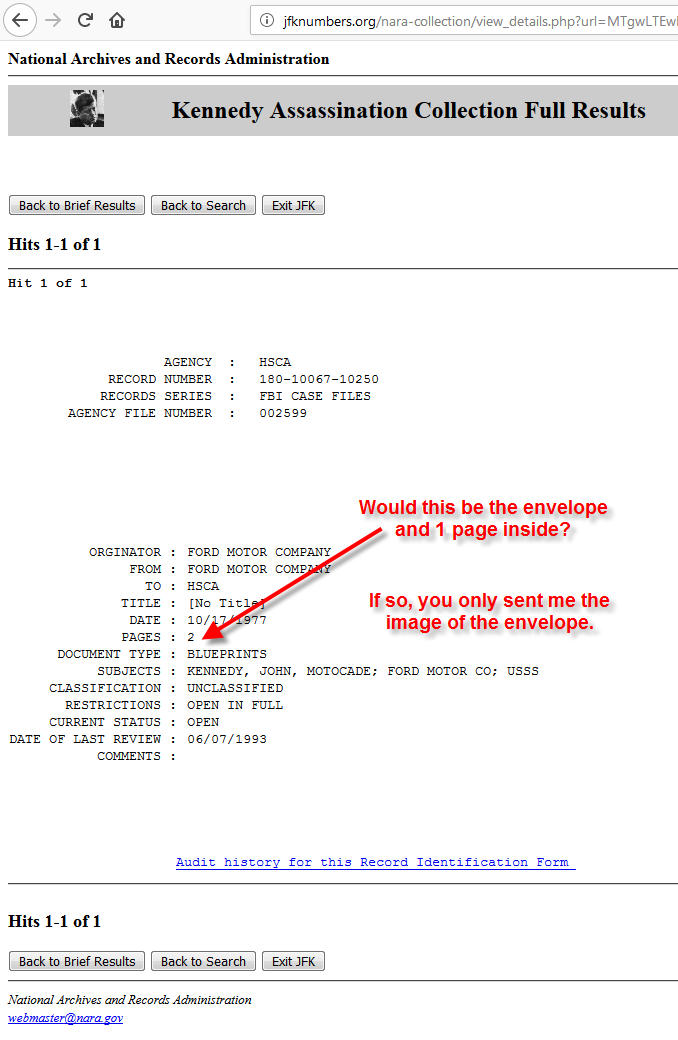 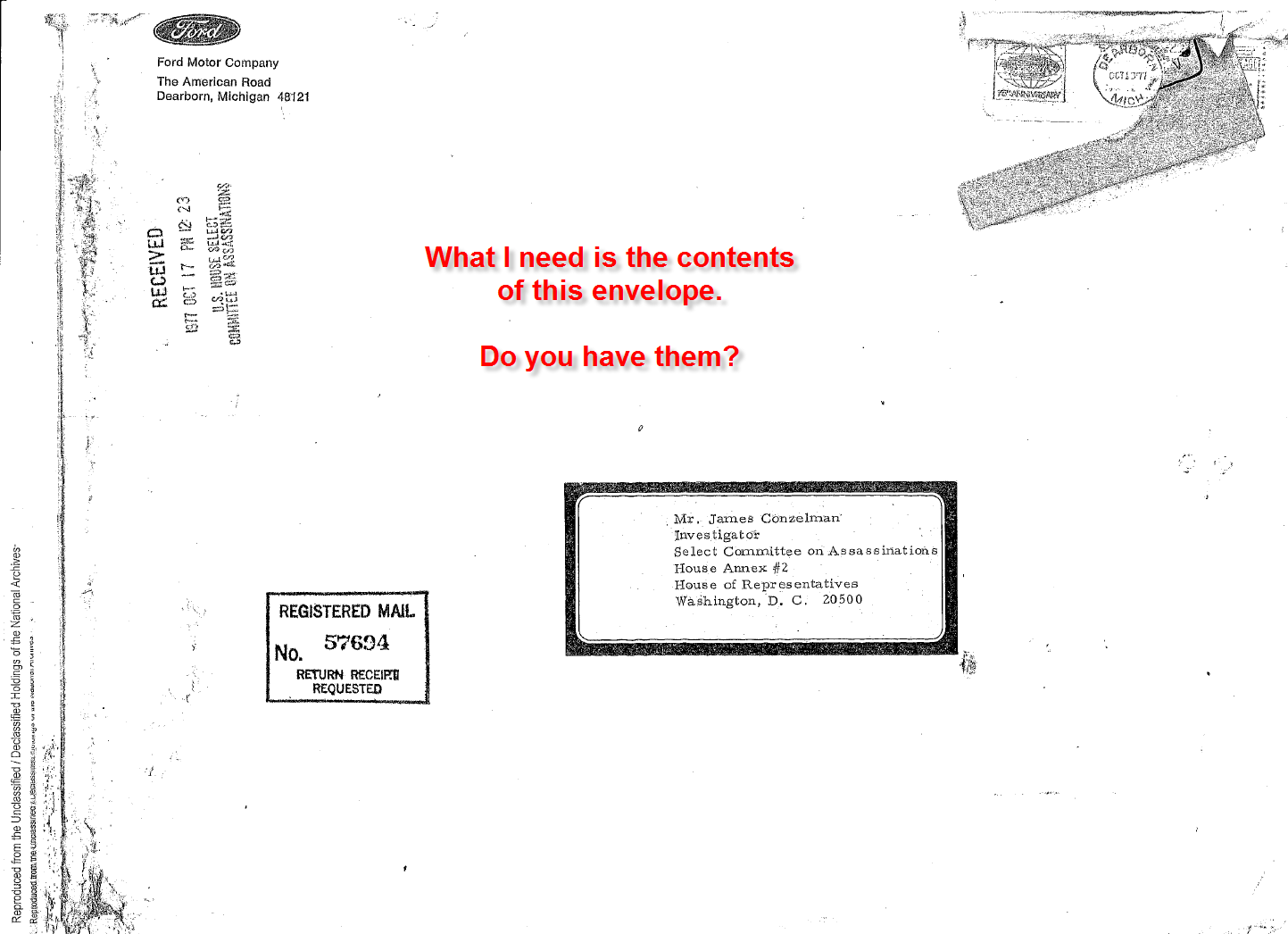 well i’ve studied this issue for years. and i can tell you one thing … the footage that we call “the Zapruder Film” is not real… and i would not trust anything that’s in it.

i’m quite convinced it’s a composite that “someone” created… there are red flags all over it.

someone didn’t make that composite in their basement in the 1960’s. no doubt it was created by the, wink wink, Fed Gov

that said, i love the work you did. i think there are scripts on scriptspot.com that might help creating a camera that rotates around at 360 degrees.

well i’ve studied this issue for years. and i can tell you one thing … the footage that we call “the Zapruder Film” is not real… and i would not trust anything that’s in it.

i’m quite convinced it’s a composite that “someone” created… there are red flags all over it.

At this point, please watch this videoclip in the JFK Numbers channel:

Never mind the silliness in the video itself. I call that collection “This has been another production of Herrera WiseAssisms”

The part of supreme importance, the difference between this project and what has been done since 1963 is in the comments below the video.

This is important, as well: 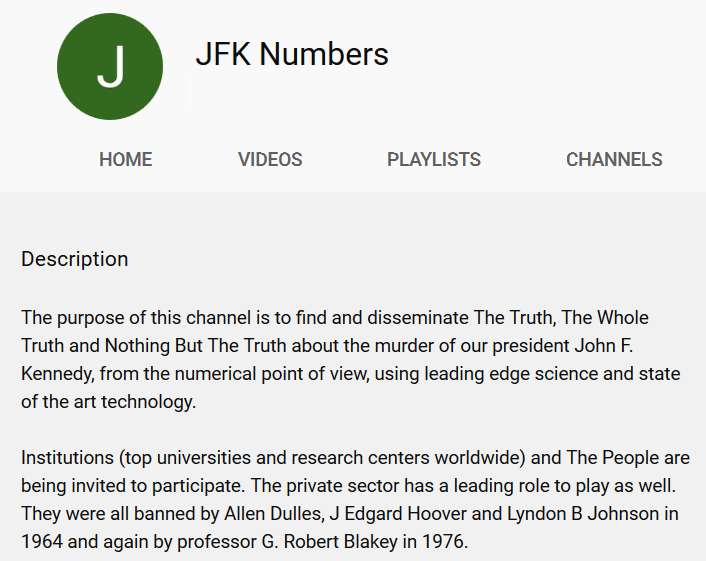 someone didn’t make that composite in their basement in the 1960’s. no doubt it was created by the, wink wink, Fed Gov

The person who worked developing images from the the Cuba missiles, etc. a secret agency, Dino Brugioni is still around. He claims that the footage that he developed that weekend was different.

The Warren Commission members were not allowed to see that footage, only selected frames. The stupid excuse? “It cannot be part of the public record. We are too girlish to watch that gruesome footage”.

TIme-Life bought it from Zapruder for an exorbitant amount, for the sole purpose of locking it up. Bootleg copies were only seen in university campuses (this was Vietnam years, as you know). The MSM would not even mention it.

Five years later Geraldo announced that he was going to show it in prime time, Time threatened to sue: “Sue me!”. They didn’t dare.

are you saying you worked on that hugh jackman movie? i must say that’s very impressive. looks amazing!

i’m familiar with dino brugioni and his story. very interesting stuff for sure.
if zapruder wasn’t in on it from the beginning i’d be shocked. i have a strong theory of how the zapruder film was created.

i guess my ultimate point is… the entire Fed Gov is corrupt. any National Archives is just a way to corral people.

are you saying you worked on that hugh jackman movie?

No, sorry, I did not. Please read this, The Most Important Post That I Have Ever Made:

Four Reconstructions of the Crime

(Scroll down a couple of posts, to reach this): 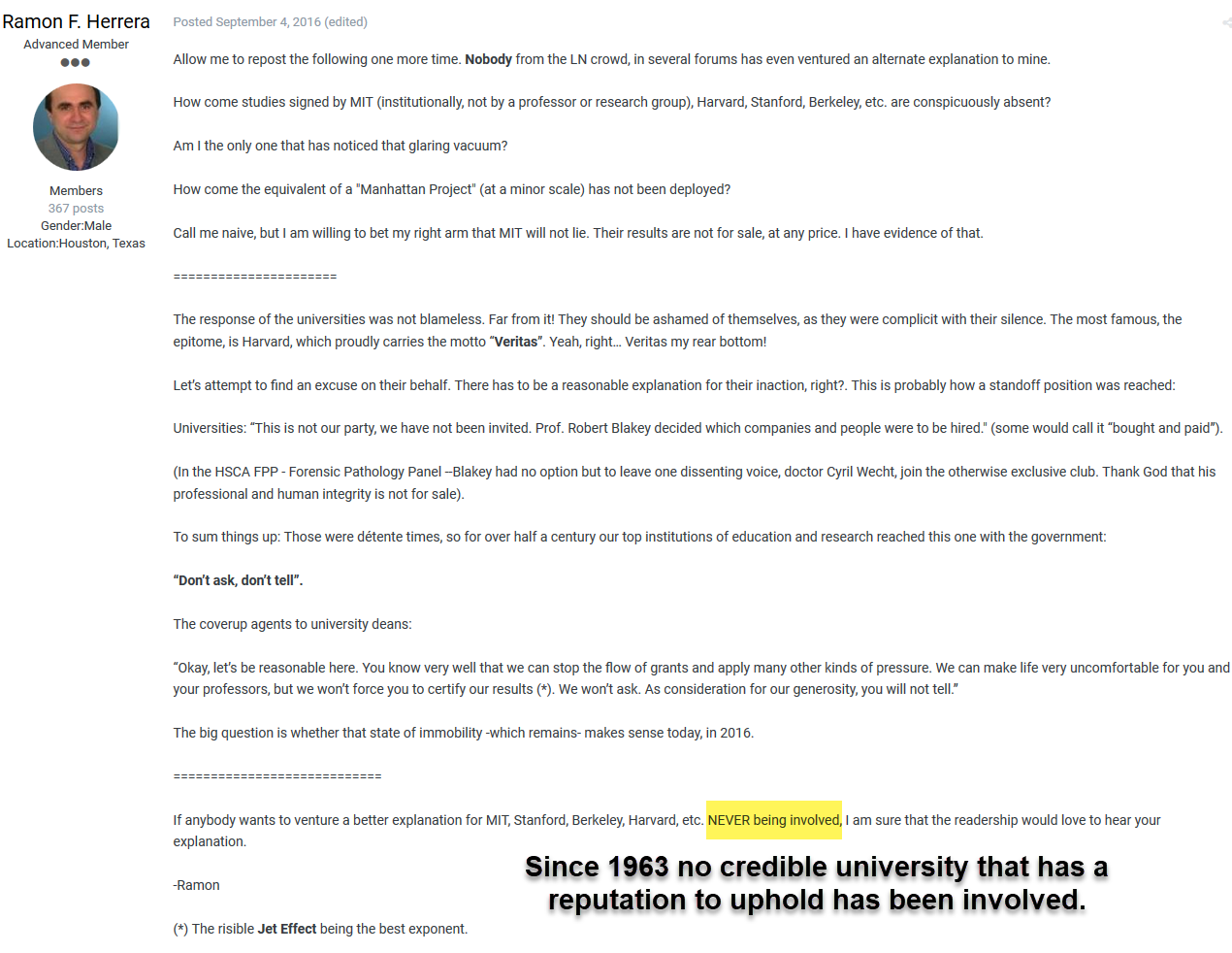 “The big question is whether that state of immobility -which remains- makes sense today, in 2020”

if zapruder wasn’t in on it from the beginning i’d be shocked.

Prepare to be shocked. He forgot his camera at home, his secretary (who hold him atop the pedestal) had to remind him and push him to go get it. The only reason that film was not immediately confiscated was because Zapruder was interviewed on live TV before developing the film, and described what he saw though the eye finder. Time-LIFE wanted non-exclusive rights to publish it. After seeing it, they tripled/quadrupled the offer, for the whole thing.

Since you are interested in films, please watch these two videoclips:

I have spoken and/or exchanged e-mails with EVERY person you see there, except the producers, Max Holland and Larry Sturdivan. Additionally, the Library of Congress designated a person as my point of contact.

I have a couple of quotes to repeat that work. They ALL want to come clean. Michael Wilder tells me that in his improved restoration technique is based on infrared.

Bilbob: We all may have opinions, even educated ones, of course. But ultimately it is not up to us to determine the legitimacy of the Z film, the X-rays, etc. At some point we will be pushed aside:

“Move over, boys. After almost 60 years, the adults have finally arrived”

We techies have found the Kryptonite, the Achilles Heel.

ps: By “adults” I refer to the Scientific Community: MIT, Stanford, etc.

any National Archives is just a way to corral people.

We have friends inside the Archives, PBS, Newsweek, etc., etc., ,etc.

Check out the last post in this thread, for some of the gory details:

People have risked and lost their jobs

Ramon,
All Gov institutions and universities are totally corrupt. and with all due respect i wouldn’t trust MIT, PBS, the LOC or anyone else. they get paid with tax money stolen from citizens and they will keep it that way.

All Gov institutions and universities are totally corrupt.

So MIT, Stanford, Berkeley, Oxford, the best universities on the planet will all have secret meetings to make sure that their academic papers all agree with the official version? How will they keep an honest student (let’s say a relative/friend of yours?). Killing him? That is A LOT of blood. How will they stop universities from other countries?

Are you familiar with Free Open Source? Linux?

In one of the forums I was told something like that. My reply:

“The CIA will also be invited to verify our numbers and models. They can submit any observation, do their own numbers and P-U-B-L-I-S-H them”

No, but I trust people who have risked and lost their jobs to make sure that we have the laser measurements.

And you don’t need Koch kind of money to repeat that scanning job, with more advanced equipment. Then it can be COMPARED with the one from PBS. Don’t you think that people who gave me that knew? I told them: “I will put those files in the project’s webserver because they do not belong to me, they belong to The People”. They liked the idea.

In 2013 dronecopters equipped with LIDAR were not available. I have 3 quotes from companies which will fly their bird within inches of the Sniper’s Nest. The FAA guy is a drone owner as well.

For MIT to be corrupt ALL students and staff would have to be on it.

The contribution to the coverup was simple: Not to be involved, period. Once SCIENCE (as in open files) enters, it is impossible to cover up their results. Anybody in planet earth can double check them.

BTW: Google “President of MIT”. Dr.Rafael Reif is my compatriot. I arrived to the university (where I worked) at the same as him.

i’m not sure i can convince you of anything this large… so…best of luck in your Research.

Probably the readers would love to read your replies to my itemized comments.

I am sure you are aware of the extreme competition in the top schools. If you make a little mistake (remember this is NUMBER and only NUMBERS) they will jump and eat you alive, in their next paper.

What you are saying is almost like: “The multiplication tables are faked. It is that large!”

I am exaggerating for effect, of course.

Did you read the part where I wrote that the Zapruder film was only seen in university campuses? Were they controlled by the nefarious forces?

People want to believe that there is something HUGE in control of everything.

Religion is one way. Your position is similar. Pleeeeez don’t get pissed at me. You have raised very important points.

As you do product objectVR , why not use Keyshot for render ?
Max spend more time to same result.
If use max , you need create a Circle shape for Camera to path constraint , in Keyshot , it’s an render mode