Running a swarm of clones (or particles) along a path

I’m hoping someone can give some advice with a would be MoGraph rig - though I’m not 100% convinced this shouldn’t be done using particles instead of Cloners/Matrices.

The effect I’m looking to achieve would be an animation made up of 7 stages (A - G) something like what’s in this screenshot below. 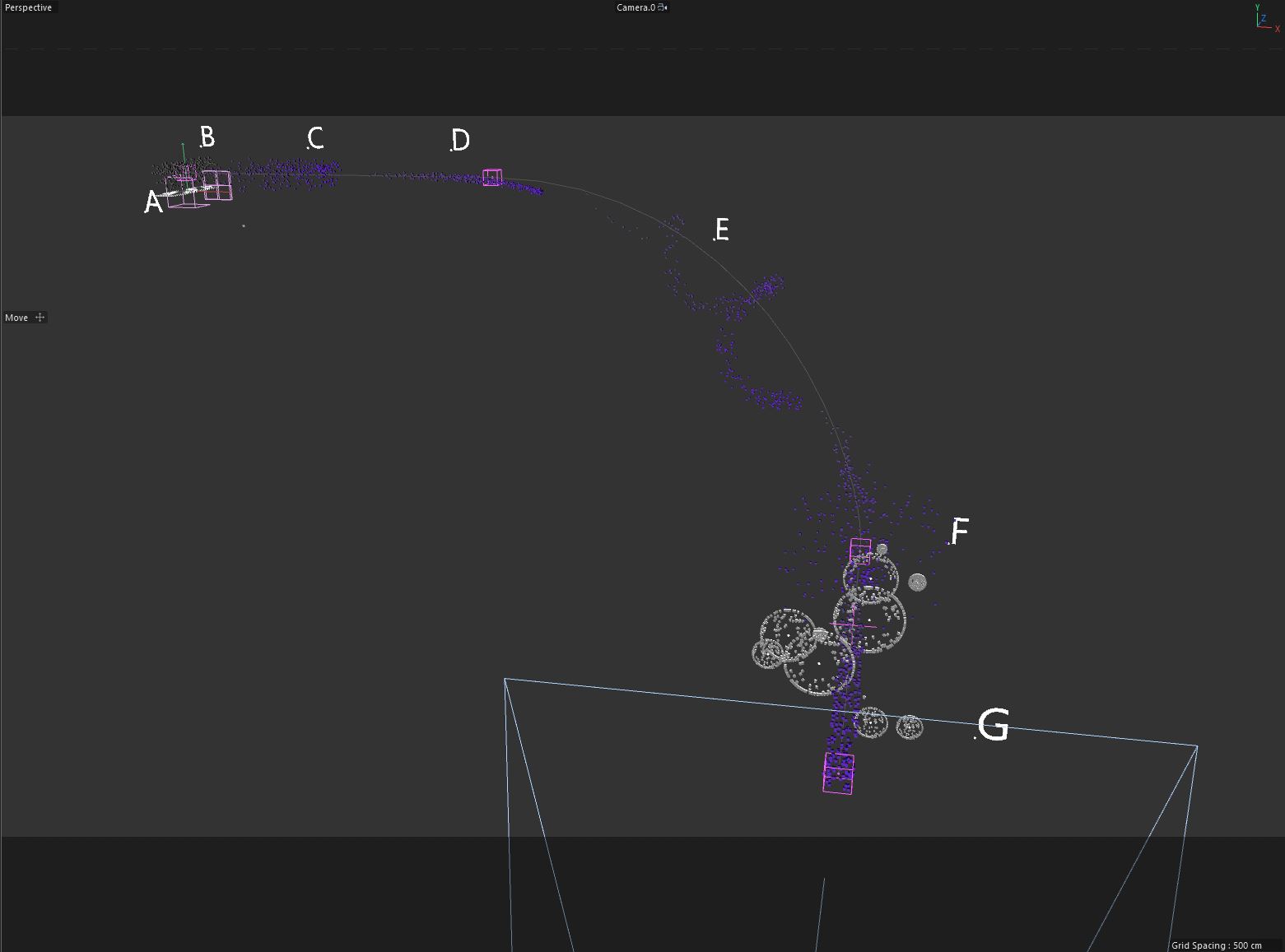 To clarify things a bit, these are my general intentions for each stage:

A - Animation begins with a simple rectangular grid of clones (or particles) whose visibility ‘wipes on’ from one end of the grid to the other along one axis. I’d assume to achieve this with a simple moving PlainEffector effecting the Scale value of the clones.

B - Once the grid is fully apparent, the clones rise up randomly along the world Y-axis to form a little random-looking point cloud / cluster. I’d assume to use a RandomEffector or Field effecting the Y-position

C - Once the clones’ Y-positions are sufficiently randomized along Y, the cluster begins to move toward X+ along a drawn spline path. The movement here should be something like a delta pattern. The clones in the middle of the cluster move first up the path, and then are followed by the clones at the edges of the cluster, until all the clones are moving along the path.

D - The cluster continues along the path. The randomness of the clustering continues, but spread of the cluster tightens up a bit so that the clones are closer to the line of the path, and the whole cluster looks somewhat long & thin, like a comet, where the head is a bit more dense than the tail.

E - the path, which was a simple straight vector at the start, starts to gently curve sideways & downward toward Z- and Y- world axes. At the same time, the path begins to helix, and the clone ‘comet’ cluster follows the path of the helix.

F - Once the cluster comes out of the helix / bend, the path straightens out again and a portion of the clones (maybe 20 of 300) have a cluster of target objects waiting for them (in this case, they are circles). While most of clones continue south along the path THROUGH the cluster of circles…

G - a few random clones hit their targets and ‘explode’. Each clone that hits a target will “explode” in 2d radial pattern of new clones, which form small-ish circles around their target points, a bit like fireworks. Something like this: https://media.giphy.com/media/wX9VpOwOzPQSIqdoC5/giphy.gif

My first stab at this has me at using InheritorEffector, to run a basic morph through each phase (except for the last phase where the clones are supposed to explode into circles). Results are about as wonky as I’d expected so I’m looking for other options.

It’s particularly important that the cluster of clones follows the path in a way that looks consistent - meaning that each clone should generally keep a consistent distance from the centerline as it travels, and bank and rotate accordingly, rather than favoring a particular axis, the way a clone cluster tends to do with a SplineEffector. I’m wondering if I should be using a Deformer instead to achieve this.

I’m also wondering if the whole rig wouldn’t be better served as a set of particle fx, rather than using Cloners and Matrix Objects.

I’d assume the technique for doing the ‘explosion’ stage toward end of animation will depend on how the previous stages are setup, so this can be of lesser priority for now. That said, I’d imagine we’d want to specify some point indexes with a manual selection or an Xpresso node, and then match point positions to the origin point of each target object - though again, I’d think the technique should not be determined until the initial setup and animation are working well.

In any event, hoping someone out there has done something like this and can offer some pointers.

This would be relatively trivial in X-Particles if you have it? I, personally, would do this in XP because it’s trivial to test for hits and trigger a new particle emitter on collision, there’s also spline guiding of the particles too.

This can also be done in mograph, the slightly complicated part is the hit registration and the switching from clone to the exploding clones. This can be done by testing for weight and switching clones. So the targets could form a field falloff and when the particle comes into contact with the field falloff its weight is set to 1 triggering a switch to the exploding cloner.

There will be countless tutorials on YT that will show you how to switch clone types. I think HelloLuxx has some tutorials on this subject. Look for a tutorial that has a logo changing into animated boxes. This goes into how to change the Time parameter of cloners based on cloner weight.

My last C4D is R20 and I haven’t used it for years so I’m afraid my C4D Mograph knowledge is becoming atrophied and not particularly helpful in this instance but since no one else had jumped in I thought I could at least point you in the direction of Tim Clapham’s tutorials.

Thanks for the reply - I really appreciate it!

I’m still on the fence about splurging on X-Particles. I avoided purchasing it thus far since jobs involving particle work tend to be few and far between for me to justify the price.

I may give your suggestion for testing weights a try, though may come back to this thread should I hit a wall with Xpresso set up (presuming that’s the way to go).

Was looking out for the Tim Clapham tutorial you mentioned (“Look for a tutorial has a logo changing into animated boxes”) though can’t seem to find anything resembling, at least on his free channels like YouTube & Vimeo. Any idea how long ago it’s from? Jonas Pliz posted one on the Maxon site recently that seems like it might be relevant to the clone-swap technique you might talking about:

Does this look to be in the ball-park to you in terms of the techniques employed?

You also mentioned you’ve been out of the C4D loop since R20. Does this mean you’re a full Houdini convert now?

In any event, thank you again for the response!

I just checked out Tim’s website and it has undergone a huge redesign since I last visited and a lot of older content appears to have been removed. It could also be that the tutorial I remember was an old FXPHD tutorial by Tim. Tim did a number of excellent courses with FXPHD but quite a long time ago now.

Your question reinforces the idiom, ‘If you don’t use it you’ll lose it’ which is precisely what’s happened. After not using C4D on a daily basis for 6 or so years I struggle to remember key gotyas and some important details. Also C4D is a different beast now with Scene Nodes and it could be the answer lies there but I have zero experience. There was a time I could’ve told you exactly what to do, sigh…

I did have XParticles from V2.0 and because of its performance I tended to use XP for a lot of Mograph consequently I have more retained knowledge of XP. That doesn’t help you, sorry.

The important aspects to your scene are testing for a ‘hit’ which can be done by weight when a clone enters a falloff but I think you’ll need to be aware of the Time parameter for Clones as you’ll need to control the timing of the exploding clones. This is the area I’m struggling to remember, TBH it’s not something I used a lot of back in the day.

I don’t know how many ‘hits’ are required it may be you just want to just hide the particle which hits a target and manually create several explosions. It doesn’t all have to be done automagically with Mograph if there are only a few hits?

Splurging on XP is a bit much for a single project, I had it from V 2.0 when the initial price was much more sensible and the upgrades were far more affordable than in recent times. XP or the Fuse package is a significant purchase these days and I’m not sure I’d be able to justify it myself if I ever used C4D again.

I began learning Houdini circa C4D R17 after ‘that’ release and used it with C4D/Redshift for a while before I discovered Blender’s Eevee which I used to render an incredibly long project and from that point I was sold on it and now use Houdini and Blender. My C4D knowledge is being rapidly replaced, I can still help relative noob questions but I’m falling short with questions like yours and it won’t be long before my knowledge is way out of date anyway.

Have you considered joining Core4D forum? Igor runs a pretty tight ship over there.

Sorry I can’t help you more but good luck finding the answer.

This isn’t the Clapham tutorial but explains the cloner time offset. https://www.youtube.com/watch?v=vVqYrXQUIZY