Hi. Is there any kind of workflow or plugin in Cinema 4D which is as fast or faster than this plugin for rapid and easy hard surface prototyping and concept art?

For those who don’t know Random Flow creates polygon details by randomly subdividing polys then extruding and bevelling them. It also distributes custom objects across the surface to add greebles.

I’m sure Scene Nodes can do everything you need to make your own Random Flow plugin for C4D with the added benefit of it being fully procedural and native.

The closest plugins to Random Flow were Greebler by Kuroyume and Polygreeble and Merk Vilson respectively. Merk disappeared for some time and apparently is now back on Gumroad. If he updates Polygreeble that would be a good option for you but currently it only supports R22.

The guy who did the publicity images for Random Flow is also a C4D user so another option is to use Blender (free) and Random Flow ($15) in your workflow with C4D.

There was actually a FREE plugin called extrudifier on the maxon labs website doing just that.

I remember using it for a quick “death star trench” render.

It was python based I believe, so it could/should still work.

Apparently it’s still there on Cineversity, so you could have a try.
https://www.cineversity.com/vidplaytut/extrudifier

Maybe not as feature rich as the competition, but it did the trick for me back then, and for once that a Maxon product is actually cheaper than Blender’s, it’s worth noting.

It beats my why it never got officially integrated at least in the browser (maybe it is now, I’m still on R21)

Good catch EricM. I completely forgot about that one.

It’ll be easy to create Extrudifier with Scene Nodes nowadays as all the tools are there (extrude, inset subdiv etc), talking of which I’m surprised there isn’t a cottage industry of useful assets like, Extrudifier, being made by the C4D community.

Give me 30 mins and I could knock up Extrudifier in Geometry Nodes too. (For free)

Random Flow does a little bit more than is currently possible with Geometry Nodes which needs loops and a polygon bisect node to do everything Random Flow does, having said that I expect one of the Blender node heroes could prove me wrong if they tried.

Extrudifier in Geometry Nodes…
Since Scene Nodes is far more developed and fully featured the sky’s the limit what you could do in C4D. 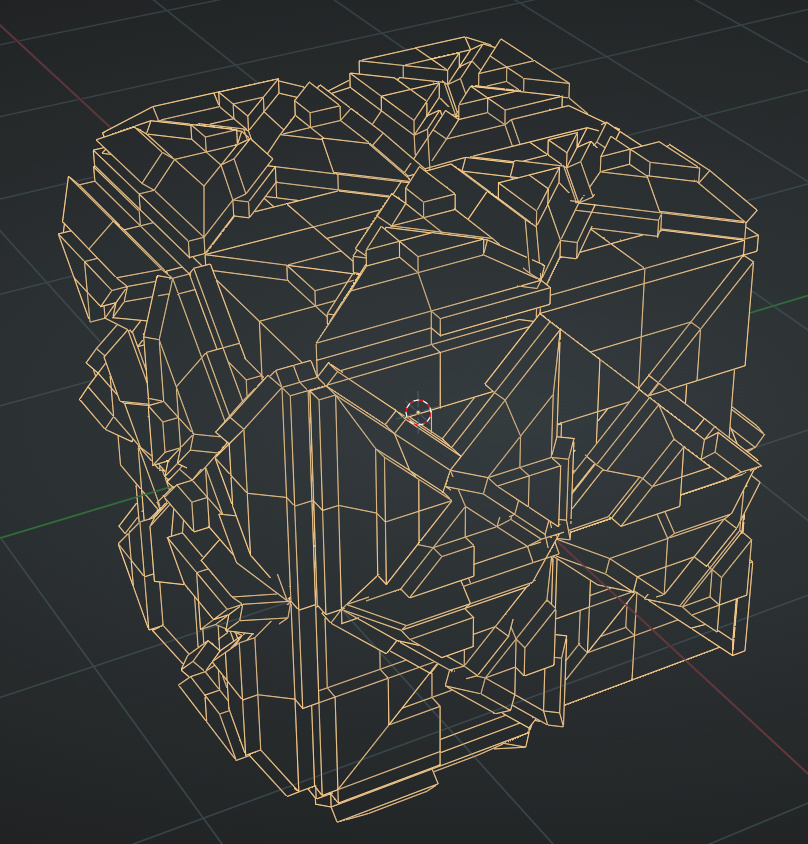 Thanks everyone. I have briefly gone through the description of the plugins on their pages. It looks like Random Flow plugin is still unbeatable in terms of ease, speed and functionality.

What keywords should I use to search for Cinema 4D tutorials that teach this kind of geometry using scene nodes and geometry nodes?

Yeah Random Flow is a tough one to beat and has no equal in C4D land.

Maxon has done an uncharacteristically bad job of selling Scene Nodes to the C4D community so there are very few really good tutorial sources. Noseman did a series on Youtube and there a couple of very basic primer tutorials from others. If you search for ‘Scene Nodes’ you’ll get far more Geometry Nodes (Blender) in your search than actual C4D Scene Nodes tutorials.

Keep an eye on Rocketlasso’s channel. Of all C4D tutorial outlets I would expect Chris Schmidt to embrace Scene Nodes more than others. Learning Scene Nodes will be a huge advantage for anyone wanting to break free of the Maxon ‘canned’ mograph effects and create their own custom effects and plugins. From an outsider’s perspective it looks exactly what I wanted 6 years ago and would’ve kept me as a current C4D user, it looks powerful and reasonably performant so it’s really surprising to see the C4D community as a whole give it such a hard pass. Blender’s Geometry Nodes is far less developed yet the Blender community can’t get enough of GN and are creating some amazing setups.

Because of the lack of interest in Scene Nodes there’s an obvious business opportunity for the savvy to create lots of Scene Node capsules for the community and make a killing. Maybe Nitroman will ride to the rescue in this regard?

Thanks a lot for the highly detailed reply. As of now I’m going for the random flow plugin only. I’ll definitely dig more through scene nodes tutorials and Rocketlasso channel.

Because of the lack of interest in Scene Nodes there’s an obvious business opportunity for the savvy to create lots of Scene Node capsules for the community and make a killing. Maybe Nitroman will ride to the rescue in this regard?

You’re saying that it’s an unfulfilled void and one can exploit this opportunity to make capsules (maybe addons kinda) to generate revenue?

I don’t know what are readymade capsules but I guess they are some kind of add-ons which make things easy.

You’re saying that it’s an unfulfilled void and one can exploit this opportunity to make capsules (maybe addons kinda) to generate revenue?

I don’t know what are readymade capsules but I guess they are some kind of add-ons which make things easy.

I’m saying there’s a huge business opportunity for those who learn Scene Nodes and turn them into Capsules which can be shared. You can create your own plugins via Scene Nodes except they aren’t called ‘plugins’ they’re called Capsules which you cold offer for sale or just give away for karma. Way back this forum was filled with people sharing homebrew tools and coffee scripts

I’m surprised that the C4D community has pretty much ignored Scene Nodes and so far the biggest upgrade in C4D’s history is being overlooked. I just don’t understand it, are nodes that frightening for people? To be fair Maxon hasn’t done a particularly great job of selling Scene Nodes and their power and their use cases. I think they need to take a leaf out of the Blender community’s book and show some game changing uses for Scene Nodes to excite people into taking the plunge.

Maybe there are workflow issues with Scene Nodes I’m not aware of but from my vantage point if I were a C4D user I would be all over these because the game changing power they unleash would allow me more Houdini like workflows without having to open Houdini.

Maybe I’ve no longer in tune with the C4D community and 99% of the userbase is content with the high level Mograph tools and has no interest in making their own custom tools. For the 1% who are then there’s a reasonable business opportunity to sell Capsules to the 99%.

As repeatedly stated by Maxon Scene Nodes are a tech demo at the moment. That is why there is no content because it could be largely irrelevant in 6 month

You might also ask why Maxon made the most absurd marketing statement which has lead to a completely lukewarm reception to one of the biggest updates to C4D in its history? Srek has even claimed on this forum it was never meant for the average C4D user, another communications own goal. It’s unfathomable why Maxon has got the communication around Scene Nodes so wrong.

Blender’s Geometry Nodes is rapidly changing every 3 months often with drastic changes which hasn’t stopped people using it. Heck, I’ve just used to for some satellite data visualisation for a client with millions of instances in 8k.

If Maxon wants C4D to be well and truly left behind and completely lose the mograph mindshare to Houdini and Blender then they are going about it the right way.

What? That is exactly why it is WIP. They are working on it. Did they choose a wrong direction? Maybe. But that is why they are changing it into more artist friendly design currently with capsules and the help of RocketLasso.

Don’t be daft. By your description of what is WIP every DCC would be considered a ‘Tech Demo’.

Scene Nodes is vastly more developed than Blender’s Geometry Nodes and it appears more powerful and in some senses better integrated into C4D than Geometry Nodes currently is.

A Capsule is just an equivalent of a Houdini Digital Asset, an XSI Compound Node or a Blender Group Node when nodes are package with a simple frontend. The same Scene Nodes are contained within the Capsule and if you’re an artist worth their salt you should be competent in building your own Capsules.

Maxon is not changing Scene Nodes at all, they’re deepening the toolset as they add more features from the old C4D into the Scene Nodes paradigm. Virtually every part of C4D will eventually be accessible via Scene Nodes or other Node Types. C4D is going to be WIP for the next 5-10 years so you can wait that long before jumping in or start learning now with a much shallower learning curve.

The fact alone that many features of Scene nodes are not visually indicated inside the viewport and are not yet really connected to other parts of C4D and its GUI should show you that the system is far from release ready. Hence a demo like they said. They offer the user an early insight into a major new aspect of C4D. Fair enough. But it is what it is. And nothing more. Let’s see what R26 brings in that regard.

As repeatedly stated by Maxon Scene Nodes are a tech demo at the moment. That is why there is no content because it could be largely irrelevant in 6 month

So what did you mean when you wrote the above?

I read this as you trying to justify there not being much Scene Nodes content because sweeping changes may be coming.

Scene Nodes isn’t going to go away it’s going to get ever more developed and central to the modern C4D experience for artists who want more control and ambition than Maxon’s high level canned Mograph tools.

There’s no reason not to start learning Scene Nodes now even though Maxon has done its best to pour cold water on that idea. My advice would be to start now and become comfortable with Scene Nodes as they’ll offer artists their own bespoke workflows no longer constrained by whatever is in the latest Mograph tools and an opportunity to set their own work apart from the masses who continue to use canned effects.

Keeping an eye on the Mograph State of Art it’s very obvious that C4D is no longer at the cutting edge of mograph design. The stand out pieces I see in my Vimeo feed are nearly all done in Houdini. I see C4D work as relatively low poly and clichéd these days. It’s easy to spot Mograph tools being used and C4D’s inability to handle high numbers of instance shouts out that this is C4D being used. Scene Nodes and the new scene graph offers users a chance to break free of the old C4D constraints.

It can only be about a week or so away from R26. The last few releases have been extremely ordinary but sooner or later Maxon will come good. But they need to do it sooner rather than later too.

I expect Maxon to focus on Mograph and get the Mograph and dynamics tools onto the new Neutron scene graph, that should give users the performance they’ve been so lacking and be accessible via Scene Nodes. If Maxon’s performance claims ring true about the Neutron system then Mograph will double up as a particle system so many users won’t need XParticles. That would be game-changing for users to not have buy a plugin for particles for the first time in a decade.

This is the level of upgrade I would be expecting as anything less would be a huge disappointment. I don’t think C4D users will continue to put up with C4D treading water any longer while other software develops at a ridiculous pace around it. Maxon must deliver.