Does your machine deliver that performance when it has to run for 10 min?

Hi Wilfried, close but the numbers are indeed slightly lower for the 10 minute run I believe. I’ll post a 10 minute run if youd like?

Just for you @ Wilfried 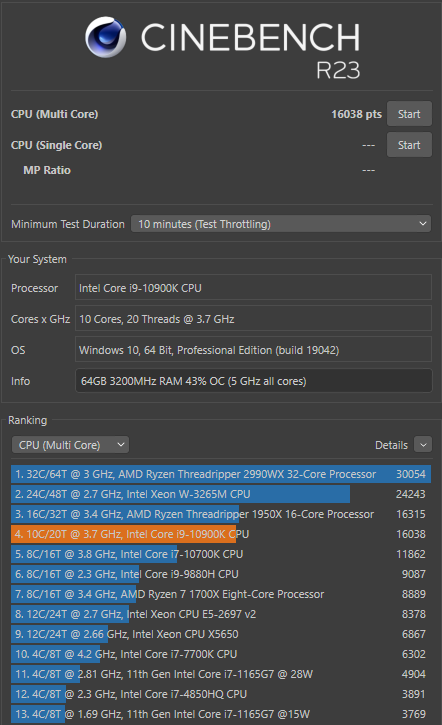 If you look into the log that’s saved after closing Cinebench (or which is printed in the console, if you used the command line), then you’ll see the results for the different passes within the 10 min run.

My guess would be, that it starts showing already a throttling - so either improving the cooling or lowering the frequency might be an idea to avoid this and get lower temps too.

I only overclocked for the test lol. Normally the pc idles at 26c with a 72c max temp after 10 minutes. Ill tweak the voltage in bios and a few other things when I tune the OC later

Unless you got a winner in the silicon lottery you will need about 1.35V for stable OC operation on the 10900K (the 30min test setting of Cinebench should be a good first indicator for stability then).

Leaked results show the M1 gets 4500 multicore in cinebench 23, vs 30,000 for 32 core threadripper. This puts it at a raw x7 faster in c4d rendering. And remember viewport speed is a combination of single thread speed plus gpu, by all accounts the M1 gpu is about the speed of an old budget geforce 1050 at best. With the ability to use an external thunderbolt gpu removed and ram capacity hard locked at 16gb, they would make for a fairly below average 3D workstation.

These numbers might be off, they’re just early leaks and strictly speaking could be the dev system rather than final released machines.

I always say, use whatever you like as your main workstation, but for a render node shoved under the desk with no screen attached, you’d have to be silly to stock up on macs when a single generic pc machine can give multiples of render speed for the same price.

Leaked results show the M1 gets 4500 multicore in cinebench 23

This score is some other chip, just wait until the first units ship this week. For now noone can bench it, its not out there.
My current 2018 MacMini with i5 scores around 5500, so the m1 will of course be faster than that. And its a mobile chip, noone says it will be a render workstation that competes with TR. But it will show the directtion of what to expect from apple desktop class chips next year.

For R23 Benchmark comparison, look at this sheet, the website’s community brought in all the results, its great: 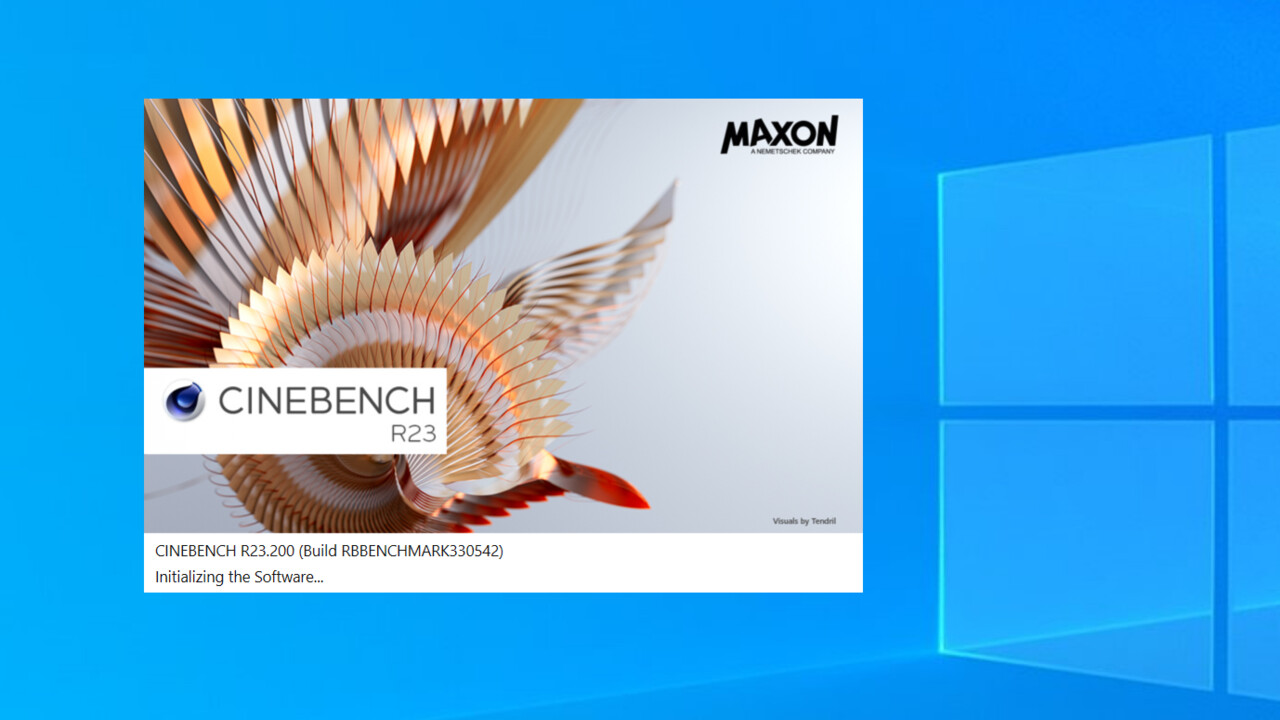 That leaked score is - if you look closely - from a development machine, including A12Z chip (which cpu wise is what was in Ipad Pros of 2018 and 2019).

Don’t expect M1 results to trickle in before Monday.

We’ll know the real score in a few days. Maybe tomorrow. I’m still sitting on my prediction of 6,500.

Regarding Minis as a render node…I agree w/you. The new AMD 5950x pulls down over 29,000…and that chip is around $1,000 USD. Why have a farm when you can have a chip like that? And furthermore serious rendering is now on the GPUs.

Nevertheless I do think Apple is going to change the industry w/their chips, accelerating the move to ARM and SoC. Performance per watt is king…and Apple’s going to dominate that metric. With their history of tuning software to ARM, their vast cash reserves…I don’t see anyone catching them in the next 5 years at least.

And an Affinity Photo dev has tested the new M1 SoC against an Intel Core i5-9600.

So the earlier numbers were pretty much spot on, actually a bit disappointed, I thought the final machines might have a bit more kick, especially on single threaded loads where they were touted to be great performers. They’re about as fast as a first gen AMD ryzen chip, which had notably poor single thread performance.

They neither spot on nor are they from a M1.

It’s a good benchmark how good some tech sites are in their technical and journalistic skills and how others aren’t.

It will be funny to re-read some comments about M1 in a couple days.
It is also silly to compare the very entry level SoC mean to be used in ultraportable and SFF to workstation hardware that consume easily 50x the M1 amount(10W), that need a massive cooling system while the M1 can run passively cooled, etc.
I guess some people here totally and intentionally miss the point.

So the earlier numbers were pretty much spot on, actually a bit disappointed, I thought the final machines might have a bit more kick, especially on single threaded loads where they were touted to be great performers.

I suggest anyone sincere about investigating…compare scores from the original, unfiltered source:
https://forum.affinity.serif.com/index.php?/topic/124022-benchmark-1900-results/page/6/

M1 kills it both in vector & raster tests. BUT…I also suggest anyone sincere about investigating remember that Affinity (Serif) folks are potentially a bit more aligned to Apple than to their PC customers.

In the Bits and Chips Twitter feed (Bits and Chips is the site mentioned, but not linked, in the article Matt posted), someone asks them, were the tests done on a Mac Mini, Air or Pro. Their answer?

So this is maybe not the most convincing or reliable test out there right now.

I’m finding the M1 launch…and all the related media and consumer response…incredibly entertaining.

Billions in cash are at stake over the next decade. Journalism is hopelessly broken. Fans of each side carry religious-like favoritism. A just-joking-tweet regarding CB scores gets parroted in tech journals and YouTube videos. It’s all one big mosh pit.

So funny to watch PC folks in a total fluster, now even questioning the credibility of Geekbench, which has been around many years before the M1.

And it’s funny to watch Mac folks thinking that a Mac mini is going to compete with a discreet Nvidia GPU that is bigger and heavier and gobbles up 20x the entire electrical demand of one of these sub-compacts.

The sad thing is that this social media driven state we’re in is valuing speed over facts, fueling opinions and feelings over forming opinions (based on facts and rational thinking).