I can’t seem to find it anywhere.

I wanted to import VW files into C4D for rendering.

Does anyone know where I can get it?

Is it still available?

Does anyone sell it?

Would appreciate if someone can contact me about it.

I’m not aware that such a plugin exists for R8. If it exists it’s way outdated and will not work with current VW versions.
Cheers
Björn

I’m not aware that such a plugin exists for R8. If it exists it’s way outdated and will not work with current VW versions.
Cheers
Björn

Hey thanks for the reply.

Actually, I’m not really concerned whether it’s outdated or not. As long as I can import it into Cinema 4D program I have.

It’s just that I had an old copy of Cinema 4D 8XL handed to me, so I decided to install it and try it out. It works on any old PowerMac and even the new Intel platform. Remarkably, the interface looks very similar to the new versions and still accepts older plug-ins out there.

So my real objective is to import Vectorworks drawings and render them in Cinema 4D. It doesn’t matter how old the thing is, as long as I can render 3d architectural floor plans.
I think the new version of Vectorworks is essentially VW plus the render engine of a “light” version of Cinema 4D thrown in. Other than some walkthrough or basic animation capabilities, I’m not really interested in all these advanced features. I just want a nice rendering engine that takes scaled plans and produces good output which exceeds the quality of the Renderworks engine inside VectorWorks.

Apparently, there was a plug-in that worked very well with version 7 and 8. It’s talked about in this website: 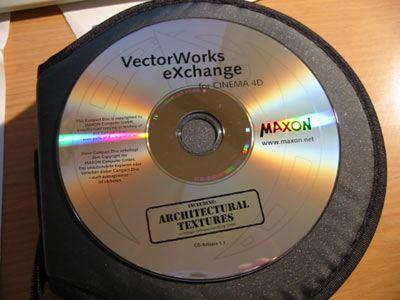 The VectorWorks CD Plug-In. This includes textures, and some examples. VectorWorks is a CAD based program where you can design, and create real things. For example, when making cars, CAD is used to design and displaying lengths, etc. This is what VectorWorks does and will be covered in a different review…For now here are some examples of CAD created work.

And its compatibility is mentioned on a French Cinema 4D website. Roughly translated it states:

So if you or anyone else knows about it or where it can be found or purchased, I’d appreciate it.

Pay only 60 , when purchasing within this month!
Get it at www.svoigt.net

…and here is a little setup I would like to share with you.
The SV Viewfinder is a tool that will help you in terms of picture composition.
watch the documentation here: http://vimeo.com/17471557

Have fun and enjoy!

I “finished” two new plugins. Not yet for R12 tough.

great plugins, have you some date release for cinema 12. I think it’s worth to commercialise your plugins !

I’ve posted it on our site as well.

My plugins are available for R12 now here, as donationware, just as before.

Great! Thank you so much!

However, there is a big bug: They wont load in mac os 10.5. Cant check for myself but i had some people report it. A fix is on the way.

Thank you so much Michael!
This Plugin-Package is just amazing!

Stefan, it seems the download link for Viewfinder is broken.
-Michael

the link is still working.
http://www.svoigt.net/userupload/downloads/sv_viewfinder_1_www_svoigt_net.zip

If you aren’t able to download the Viewfinder, you can also write an email to me
and I will attach the SV Viewfinder to the reply.

Since I could only find compiled R12 versions of the
AMa_ChamferMaker plugin for Windows, I decided to
update the plugin for R12 on the Mac.

You can find source and binary downloads at

just wanted to add my own little plugin I’m currently working on, Grey Cloud. It’s a Python based plugin to generate a particle cloud from an image (sequence). Have a look and play around, would love to hear feedback.

I’ve also put up a sample of what to do with it here.

The xVBaker Pro Plugin for Cinema 4D allows you to easily convert rigid body dynamic simulations into key-framed objects that can be exported for use with other 3D applications. Once objects are baked, they can exist totally independent of any dynamics tags in C4D. Baking eliminates the need to save out large cache data or re-simulate at render time. You can export a baked animation for use in previous versions of C4D or other programs such as Autodesk Maya.