Post here the most useful plugins you know, with a brief explanation of what they do and, eventually, the price :wavey:

DiTools - A suite of deformers and generators currently version 0.8 soon to be 0.9. Includes:

Dicloner - Clone an object on the verteces of another object taking into account the objects texture for many parameters.

DiShaper - Realtime displacement, allows you to take multiple textures and displace an object in any direction with them, shows the displacement in the viewport.

DiSplineGen -Generates splines from the verteces of another object. Great procedural modelling tool (and also neat for fields of corn or hair).

Also contains a couple of cool shaders that work with the ditools plugins.

TDEM - Particle plugins which allow some serious control of the standard non thinking particles particle system in Cinema. These tags and objects allow you to emit from teh surface on an object, to constrain an objects surface to the particles, to give the particles goals, to generate splines that react to particle generators (gravity etc) like hair would.

ASE Exporter - Apparently for those Unreal Tournament files or something, maybe someone else can explain this one better than me

And I have made a few plugins myself

Go to the library area of Renderzone.

Camera Gaffer - A tag that when applied to a camera modifies the rotation behaviour in a number of different ways for better modelling control.

Julienne - Slices a selection or object a set number of times in any direction evenly.

Flush Select - Allows you to expand your current selection out to the edges of that “plane” on your object. Can also with a little ingenuity be used to select polygon belts.

oh and i just addded one 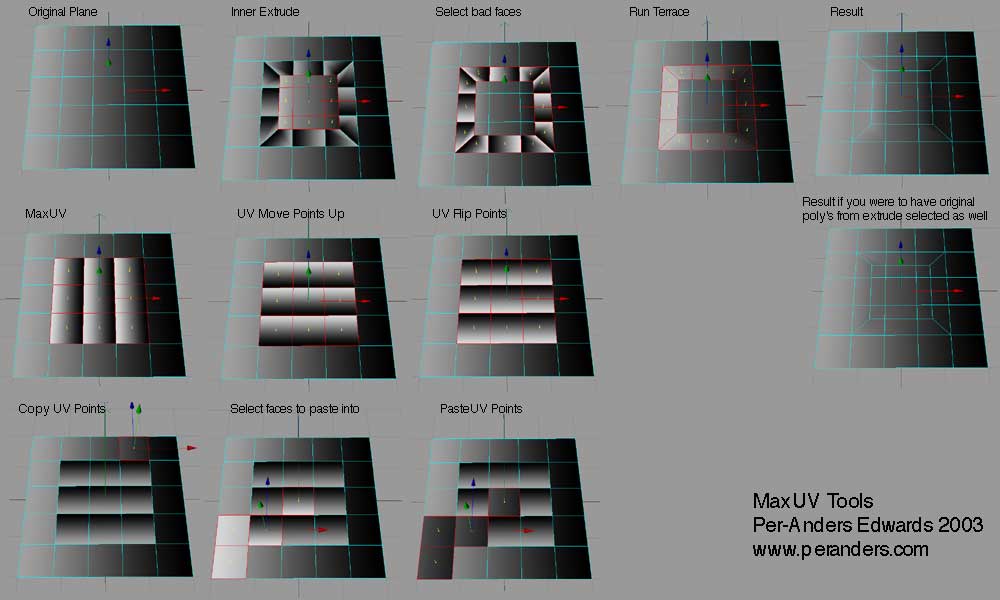 A bunch of really useful plugins now for free! :bounce:

20 years of 3d know-how! character Character work is what I like most and I'm covering the complete work flow from character design over modeling and sculpting, UV unwrapping and texturing, rigging and morph target creation all the way to...

MSA and HELIX by Mikael Sterner (NOT for free)

Use MSA all the time!

MSA (Multiple Spline Attach) allows for things like aniimateable chain links, and beads on a string. Can be used in conjunction with Helix for things like DNA with all the nucleotides/basepairs aligned and twisted properly. All kinds of animateable parameters.

Helix allows you to wrap a helix around a spline and the spline can control the movement of the helix as well. Much better than the spline primitve spiral that comes with C4d.

loads of different stuff to check out…

enjoy some excellent stuff out there…pay for and not.

Extrude poly along a spline

I just implemented the LightWave-SpinQuad-Tool
for Cinema.

I have put a sample C.O.F.F.E.E plugin and some reusable XML Classes on my site:

Description of plugin and classes:

CustomXMLExport is a sample filter plugin that allows you to export CINEMA 4D scenes as XML. This sample plugin shows how to use the XML classes in the file, “tinrocketXML.coh”, which formats your content and structure into a valid XML file.

This plugin is independent of the native C4D XML format, which is not documented and had recently disapeared for one release (8.0). It is therefore available for your use when the built-in options for exporting your scenes in a human-readable format is not supported by C4D.

Hi, there is a Plugin from me.

This Plugin sets the position and rotation data of an object to zero. If the object is in a hierarchy, then the object takes over the data of its over object. It is a very simple Plugin, if one builds however the Icon into its layout, can it the Workflow increase.

some of these have already been posted.

but for those of you who don’t know about renderosity’s plugin listing’s here they are.

and you can find the hair department plugin here.

Plugins to manage IK or CA.

UVmapper: Edit the uvmesh visually - quite usefull already for those ones who don’t have bodypaint

There is some great stuff being developed - thanks to all involved!
I just found this yesterday…
Check out ‘MoveShearRotate’ at:

I’ve no connection with the author - I’m just a user happy to find this plug, which goes some way to filling a long standing gap in C4D - the ability to rotate points around a user defined centre*.

The author has already had requests to extend the functionality to include ‘scale’, and to enable an edge to act as a selected axis of rotation.

This guy deserves some support. His other plugs are also excellent.