Hi all,
I am happy to announce a new plugin I have been working on for quite a long time: 3delight for Cinema4D (3DLfC4D), a rendering bridge between C4D and the amazing 3Delight renderer from Illumination research (www.3delight.com).
I have developed this plugin for use in my own personal projects, but I have now decided to make it available as open source.

Some feature highlights:
-Render C4D scenes with 3Delight, a production ready renderer used on several hollywood productions.
-Physically plausible rendering with OSL shaders.
-Based on the new NSI (nodal scene interface) technology from Illumination research.
-The 3DLfC4D plugin comes with its own API, and is designed to be extensible by 3rd party developers.

-Download and install the 3Delight renderer. Illumination research offer a free version with unlimited features, but restricted to rendering with 12 cores.

-Download the 3DLfC4D plugin (See the “releases” page for downloads). Current version is windows only, and should work with C4D versions 17-19. The download contains four c4d plugins (3DLfC4D, 3DLfC4D_geometry, 3DLfC4D_lights, 3DLfC4D_shaders) . Place all of them in your C4D plugins folder.

Note that the current version of the C4D plugin is a pre-release version, so be prepared that it is still a little rough around the edges. The plugin is under active development, so feedback and feature suggestions are welcome!

So sad it is for Windows only, but thanks anyway and I can’t wait the OS X version!
Cheers

Assuming 3Delight itself is Windows-only, in which case sad but not at all surprising given that Apple has ignored this market until recently, based on their hardware options, their API choices and other aspects. They may yet continue to ignore it; we’ll see with the next Mac Pro.

Generally though I fully expect any new great plugin, especially if it is designed to integrate with niche apps or renderers used in Hollywood, to be Windows only and Windows/Mac if we’re lucky. Presumably most custom built apps that are designed for Hollywood and end up being cleaned up for commercial resale, start out Windows only for obvious reasons, but maybe one day that will change.

The 3delight renderer itself is available for both mac and Windows, so in this case it is just a matter of compiling the (open source) c4d plugin for mac. I don’t own a mac myself, but hopefully some other c4d developer can help out with this. Cool, I’m glad you got it working!

I haven’t tried Ornatrix myself, I assume you converted the hair to a polygon mesh to render it?

Yes, to ribbon or cylinders
It needs NSI operator tag for curves like https://gitlab.com/3DelightOpenSource/HydraNSI/blob/master/hdNSI/curves.cpp

Yes, curve support for efficient hair rendering is definitely on the roadmap!

I re-register at 3delight forums. Seems their forums are empty?!

Honestly, i did not use 3dl in my cineman’s and several own tools workflow. I had sitex air(c4d, sketchup, rhino) and a little prman

The 3delight website was redesigned just recently. My guess is that their forums will be up again soon.

The 3delight renderer has changed quite drastically in the recent year or so. It is no longer a renderman compliant reyes-style renderer, but a physically plausible raytracer using OSL shaders. The RIB interface has been replaced with their own NSI api, which is more modern and really enjoyable to work with as a 3rd party developer.

A bit late to the party, but that is really interesting for me (hobby Prime-user, maybe I render once a year for work). So I installed 3Delight and also the plugin (all 4 folders directly below plugins, as described in the tex-file), but I do not see any entries in the plugin menu or the renderer selection, nor any new tags. Any of you has any hints? The console does not report anything. I tried it under R19 (before I try the mariage with R20 via the Insydium bridge), but I guess I could also try R17/R18 if necessary.

Hi Christian,
That’s strange! After installation, you should see several new entries under the “plugins” menu.

The plugin is developed for R17, but should work for 18-19 as well. Note that the compiled version on GitHub is only for Windows, are you by any chance on a Mac?

I am on Windows (10). I was able to get it running under R17, but only after doing the last service update. No luck with R18 or R19, even though all updates all installed.

Just to compile my journey with the plugin so far to make it a bit easier for other newbies:
The plugin comes with the following entries:

So I placed a plane, a sphere, a camera and a DL_Arealight. I selected 3Delight as Renderer in the rendersettings and pressed render Frame, which started the 3Delight Display. But the image is just a gray noise.

But the material gives me some problems. It only features 2 slots to load surface or displacement shaders. So I figured that’s where OSL comes into play and remembered seeing some files in the plugin folders. I tried most of the osl and oso files, but each one is rejected with “Invalid File Format”.

But, as it turns out the main problem with my simple scene is a different one: I looked at SPs screenshot and noticed the object statistics, which I didn’t notice forst because they are on another tab in 3Delight Display. When I found them I noticed that there were no polygons. So I converted my simple scene to polygons an got a nice quick render!

Thanks Filip for the hard work. And please, keep it going

Thanks for the report! I don’t know what could be causing the problems with R19, I’ll see if I can look into that.

-The user guide is a work in progress, and once it has reached a somewhat completed state I will definitely provide a pdf version.

-Yes, the current version only supports polygons. The upcoming new version also supports alembic caches, so that animated generator objects can be rendered by first caching them to alembic.

-Regarding materials, look in the procedural shader dropdown in the texture slots for “Surface shader” and “Displacement shader”. Under “3DLfC4D” you will find some 3delight-specific shaders. The “DL_StandardSurface” shader, for example, is suitable for general purpose surface shading.

Hi
I test a recent version of 3dl4c4d with 3dl 1.4.7 and openvdb object. Thanks to Filip Malmberg and Ogers Ruda 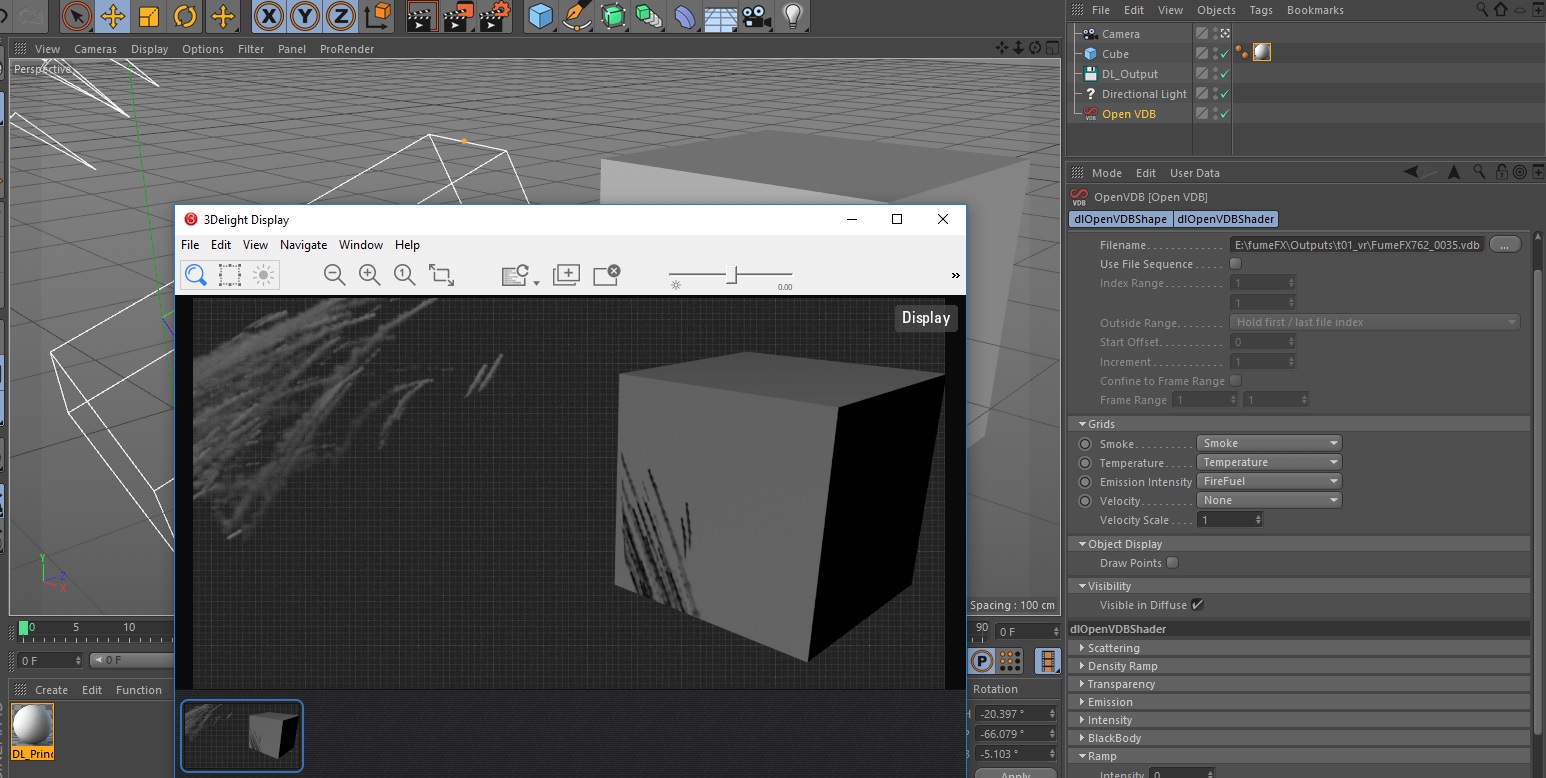