Hey everyone, here’s my first upload for this challenge. Still some work to do if I have the time. C&C welcome.

Hi. Excuse my english, it is not my mother tongue. I have thought about an invasion of zombies that they go out across the screen. For that I have started reconstructing the character to put him in another position, escaping of the horde. It will try to see if i has time to create ther models and the light atmosphere that the scene requiere.

after getting the feedback i tried working on the scene. here is what i have now.

i just realised there was a silly mistake i had overlooked. so i corrected it in post production.

Hello, i’m just checking the scene and ( just for curiosity ) i tried to deactivate the backface culling for the walls and the screen, but is not working and they still hiding once the camera goes out the room… any idea??.
thx

This is my first pass at this challenge, let me know what you think. 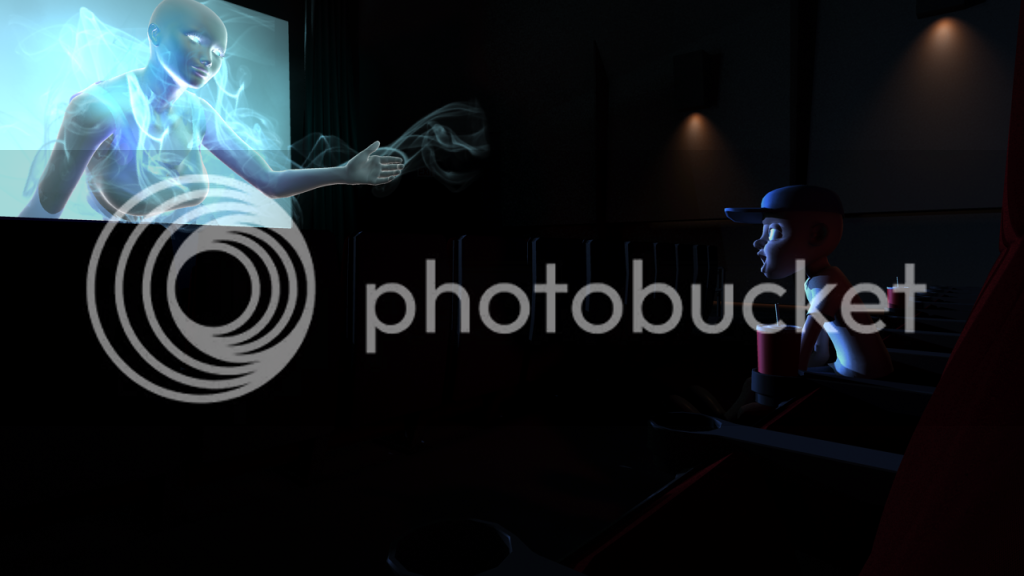 clairekearton: Welcome! Overall the image is extremely dark so objects lack definition. Dark scenes usually require lots of subtle fill and rim lights to show definition. The first area I’d like you to look at is the row of chairs in front of the character. It’s really difficult to see where one chair ends and the other begins on both the sides and on the tops. Try to create some kicks on the left side of the chairs coming from the screen, a rim on the top from the screen and a subtle rim on the right side from the lamps on the walls. With the character he’s getting a very large amount of diffuse light compared to his surroundings. Try turning down the intensity of the diffuse light and add in a rim or kick light from the screen to define the front edge of his form. With his back, try a dim warm kick from the wall lights. That should give you a little bit to work on. Here’s a paintover with some ideas: http://www.dockay.com/CGTalk/LightingChallenges/Lighting_Challenge_26_Matinee/paintovers/clairekearton_107.png

tempus: What software are you using? It’s possible you’ll need to reverse some normals if you’re having culling issues.

Genaf1: Nice additions. One thing that really sticks out to me is the consistent value on the red pillar, try to create a gradient across it. I’d like to see the specular highlights pushed a little further, especially on areas like the railing on the bottom right of the image and on the black parts of the chairs. The depth of the image could be pushed a little further. The chairs furthest from the screen are nearly as bright as the chairs closest to the screen, try to make the chairs further back darker than the ones in the foreground. Here’s a paintover with these suggestions illustrated, as well as a few others: http://www.dockay.com/CGTalk/LightingChallenges/Lighting_Challenge_26_Matinee/paintovers/genaf1_105.png

This is my attemp. It´s not so original like I’m watching in some of you… Nice images! Here is my first go at the challenge. still got some work to do getting the theater walls better lit and over all the image is still too dark .

Work in progress. Finish the character, riggin and setup the scene. I am testing some materials. Hope i have time to finish. C&C are welcome.

I’m beginner and i’m a student so i need a lot of critiques and tips for my picture.

I work essentially on the light for the moment and not the texturing and shader phase.

Thank for your help and for the challenge

Sorry for my english but i’m belgian (I speak french) so if you don’t understand one of my word, tell me please.

Here’s my progress so far. Render got screwed up. Theres blobs on my picture.

I plan to work on the projector beam a bit more and try and get it looking better. DOF I just added in photoshop real quick to see what it would look like. Any comments or suggestions are greatly welcomed.

Thanks kanooshka for taking your valuable time in helping all of us:applause:… working on it
about ur image i loved d texture on the arm rest (plastic material) but the eyes of the boy looks flat to me.i also see that the sits behind the character looks smaller or shifted down

@neotrixstdr loved ur character:thumbsup: and the scary look on his face.

@outsider i fell the red texture(color) and specular highlight on the sit is dominating the whole image i think fading light in the background from the character(boy) would help to centralize him(boy).

@Jadrock … It has a lot of sense. Looking at it again…It´s possible specular is distracting too much… I will try some changes.

LBcover: Good job. I’ve found one reason for blobs like that can sometimes be trace depth inconsistencies. Check the trace depth of your FG , make sure the depth is not higher than your trace depth of your lights, materials and in the render globals. The character’s skin is looking a little waxy. I think it’s a mix of the sub-surface scattering and highlights being too strong. In general, there are a lot of highlights that are rough and strong. Keep in mind that the rougher the highlight, the dimmer they are.

Xmatypa: Welcome! Interesting composition. The subsurface scattering in the face is a little strong which makes the character look made of wax. Try to use the scattering to just soften the shading terminator. The kick light on the character from the projector is a nice effect. Try to do the same on the cup, lid and straw. The inside of the character’s mouth is very bright, make sure to use shadows on your key lights.

gashworm: Nice start. The character seems to be receiving a much larger amount of light than the environment around him. This is one reason why the light looks unmotivated on the character. The rim lighting on the chairs on the right edge of the image appear brighter than the projector, which looks like that’s the rim light’s motivation. Try brightening up the projector a little bit since it is a light source. I’d like to see more light coming off from the screen, to give some illumination to the chairs and cup.

TheOutsider: Good work so far. Highlights are one of the main ways a viewer can see what type of material an object is. In your image the highlights are pretty consistent over all of the objects and I’m not sure if that’s intentional or not. To me it looks kind of like everything is made out of clay. I’d like to see more contrast between the two main light directions, they’re fairly even in brightness…

New w.i.p. Added a zombie adn starting with a frankenstein monster. I have no time to make so many zombies, so i will make a close up camera, lighting the faces and adding fog and volumetric light in the backgroun. I have the cinema room textured, so i will star soon to setup the scene and finishs the details. This is my first lighting Challange
here just diffuse and specular next time may add texture and sss
I think about thise time the fron child and chair are not colorfull enough, I
will color correct them and denoise next time
hope you like:)

Thanks for the feedback Kanooshka. It helps a ton. I’ve been working on toning the spec down, and trying to get a better looking skin shader.

Great work everyone. It’s been really interesting to see everyones pieces and how they tackle this challenge.