Here is a cleaned up file. All the polys flipped correctly and better scene management for modo. Glass is hidden from GI and shadows in the shader tree. There is interior and exterior groups for easy management.

to enter a contest.
this is my basic lighting sketch. Default imported materials, FG and direct lighting. 8 min to render on Core2 2.4Ghz - Maya MR Hello,
This is my fisrt challenge. Thanks to my friend, who showed me this topic few days ago and also flipped normals in this scene(this was too boring for me :rolleyes: )

thx for your comments Jeremy, tried to create some really bright spots…texturing is still beta! Its quite hard to get a working low key lighting.
hope you like it

Update. Views from other viewpoints.

Hi,
This is my fisrt challenge. i’ve render the file using maya mental ray with Final Gathering and Global Illumination.

FUZZYLIZARD - I like so much your entry. Clean, with a good difuse of light. There’re no shadows with high contrast. It’s smooth…
What happened with the glass in the right side?
It happened to me too. Was those polys fliped? I will check mine.
Congrats and keep on!

aanup - Welcome! That’s a good start. For a night scene, try being more selective with the lighting. Allow some areas to go really dark, use dark shadows, use a lot of contrast, but really light some areas where lights are aimed, such as around the dino.

kaceface - That’s terrific! You’ve got a really nice feeling there. I think some of the lights aren’t shadowing correctly, make sure all the lights cast shadows so nothing shines through the geometry. The highlight on the inside jaw of the dino should go away, more light on some of the teeth might be nice though, at least enough to make the lower teeth read against the background.

kiko77 - Great “cathedral” type lighting there! The spot lights in the architecture are first-rate. If it’s supposed to be nighttime you might add a soft purple or blue glow coming through the skylights, but get rid of the sunbeam on the floor. I think the center of the ceiling is going a little bright, especially for something on the edge of frame.

Fex - Try making all your lights 3x as bright, except for the lamps on the back wall. If 3x is too bright we might back off to 2.5x, but 3x would be a good start.

d2fan - Welcome! That’s off to a great start! The background is terrific, I think everything you see out the window could look brighter. Inside the building could use more fill light from the sky. I’d expect the left wall, with the sunbeam on it, to also get brighter fill from the sky, but instead the right wall seems to be getting more fill. I think you could double the light on the dinos. Try making the architecture in the foreground much darker to better frame the shot.

ChicoBravo - Welcome! That’s a good start! Try putting some light on the head of the t-rex. On the left edge, take the light off the pink thing and darken the base of the columns. Maybe the skulls on the right could have some light on them and could be rotated 180 degrees so we see them?

Yazan - Thanks for the file! I’ll put it on the download page…

infectedbo - That’s great! Based on your most recent post, I think you could rotate the dino on the right so we see him better. Parts of the left wall and floor seem a little bright, some shadowing or occlusion would help the sense of contact between the floor and the walls.

fuzzylizard - That’s looking good. Overall I think the walls are a little too bright, and the dinos and fossils and skulls are too dark. There are surface normal problems in the glass on the right. The fill light from the sky could be a more blue color, and should aim more towards the right, with a little less on the left wall.

wasimattar - Looking good! I think the dinos are too similar in tone to the architecture behind them, try to create some contrast there somehow. It seems as if you’re using a very wide-angle lens, which might be helping the sense of scale in the room but pulls us away from the dinos as subjects.

COBRASoft - Nice work. It looks a little evenly lit, perhaps more shadows or occlusion or being a little more selective about your lighting could bring out a little contrast in the scene?

BlenderFan - Looking better! I think you could put more light on the floor right aroung where the dinos are, and a little bit of light on the glass to help that pop out. Get rid of the highlight on the bottom edge of frame. Try adding some shadows under the t-rex, and get some light on his lower jaw.

Kunotaku - Interesting image. It seems as if there’s a light on the set that isn’t casting shadows, your scene really needs contrast and shadows and dark areas to help build the mystery and nighttime feeling. Maybe the dinos could use some top-down light to give them some more shaping and contrast?

Hello, my first post on CGTalk… got to remeber this one )) with a cold beer, CHeers for 3December ;).
My try… i think its to dark… but this way i see this museum.
Well, i used 3DsMax, Vray and Photoshop…

COBRASoft - Nice work. It looks a little evenly lit, perhaps more shadows or occlusion or being a little more selective about your lighting could bring out a little contrast in the scene?
[/b]

Thanks JeremyBirn for the comments.

Hi Jeremy and everyone,
Here is my latest update: Textured the ceiling with some medieval ceiling bosses, Included the triceratops in the reflection and also moved the heads so they reflect and are included also, for interest i’ve modeled a couple of exit signs and a string of rope stanchions.
The trex’s glass was showing too yellow so i’ve lit the wall behind the camera with a blue light to reflect and stop that. Got some reflections in the skylights and improved the lanterns. 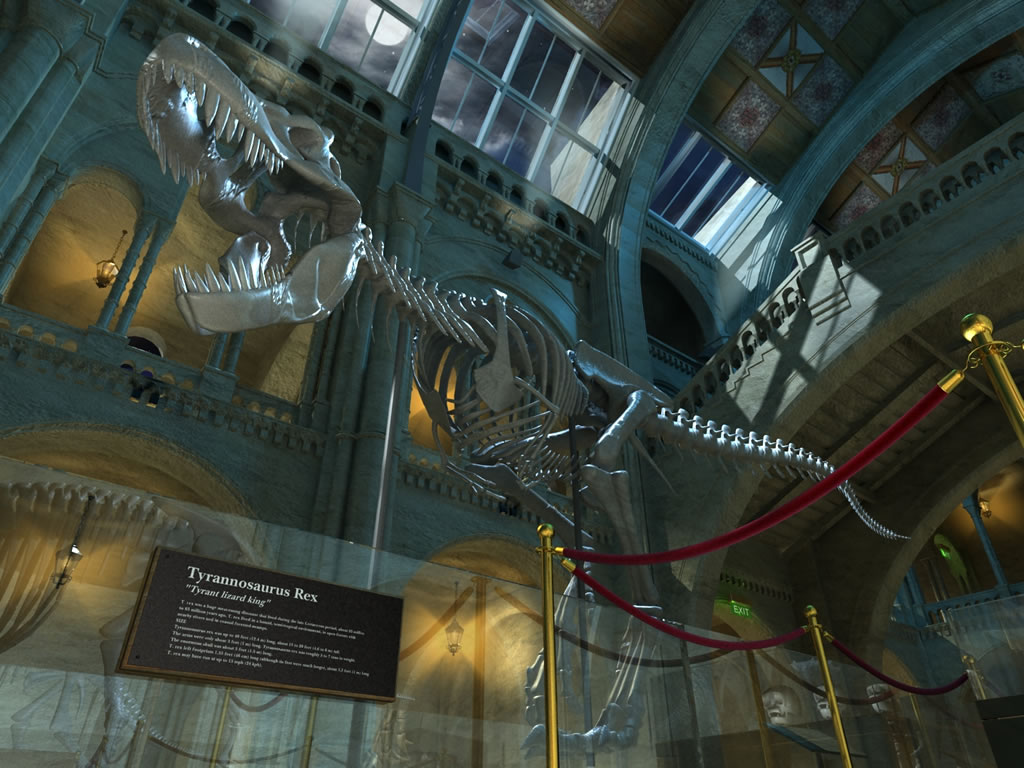 Hi All,
Here’s my last try, where I had those focus:

I worked this scene using 3ds Max 2009 system fakeosit with.

I can open 3drender. I don’t known what could it be. Anyway tell us what file format you need (or what 3D software you use) and whether you can open free hosting sites like rapidshare or megaupload so we can upload it there.

hi,
this is a little update, without any sketched lines.
i am using Cinema4d raytracer & a post-effect plugin called LSD (it adds a bit of desaturation & noise)