Getting Cinema 4D from alternative sources?

Do you folks have any comments/experience about getting copies of C4D from eBay?

I acquired on aBay some very inexpensive licenses for Windows 10 and Visual Studio. They seem to be copies that were bulk purchased and they sold the rest. The download site is microsoft.com.

There’s no way this is legit in this case.

I’d think the license would work on both Mac and Windows if it was legit. 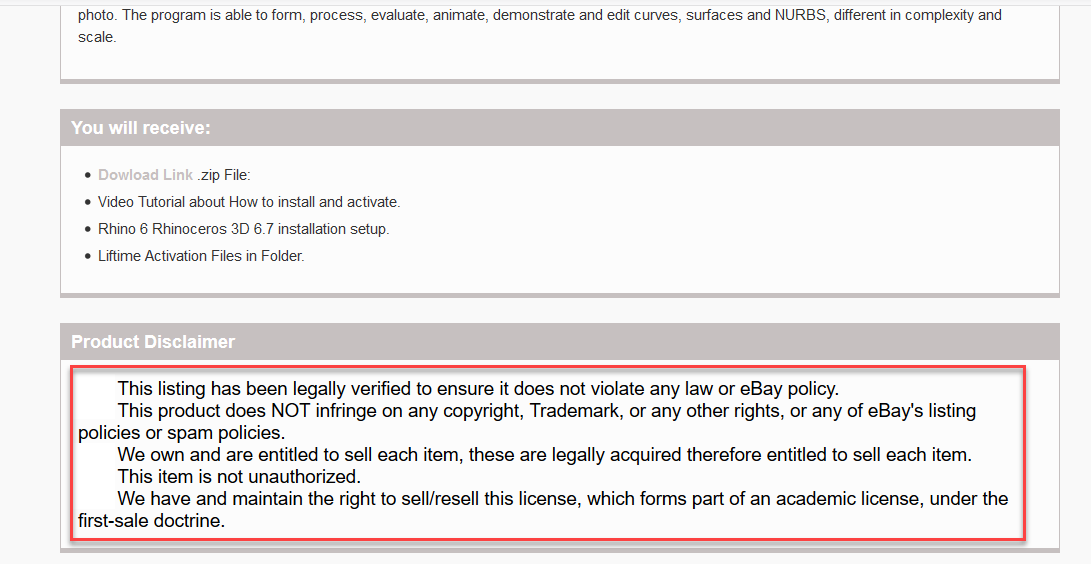 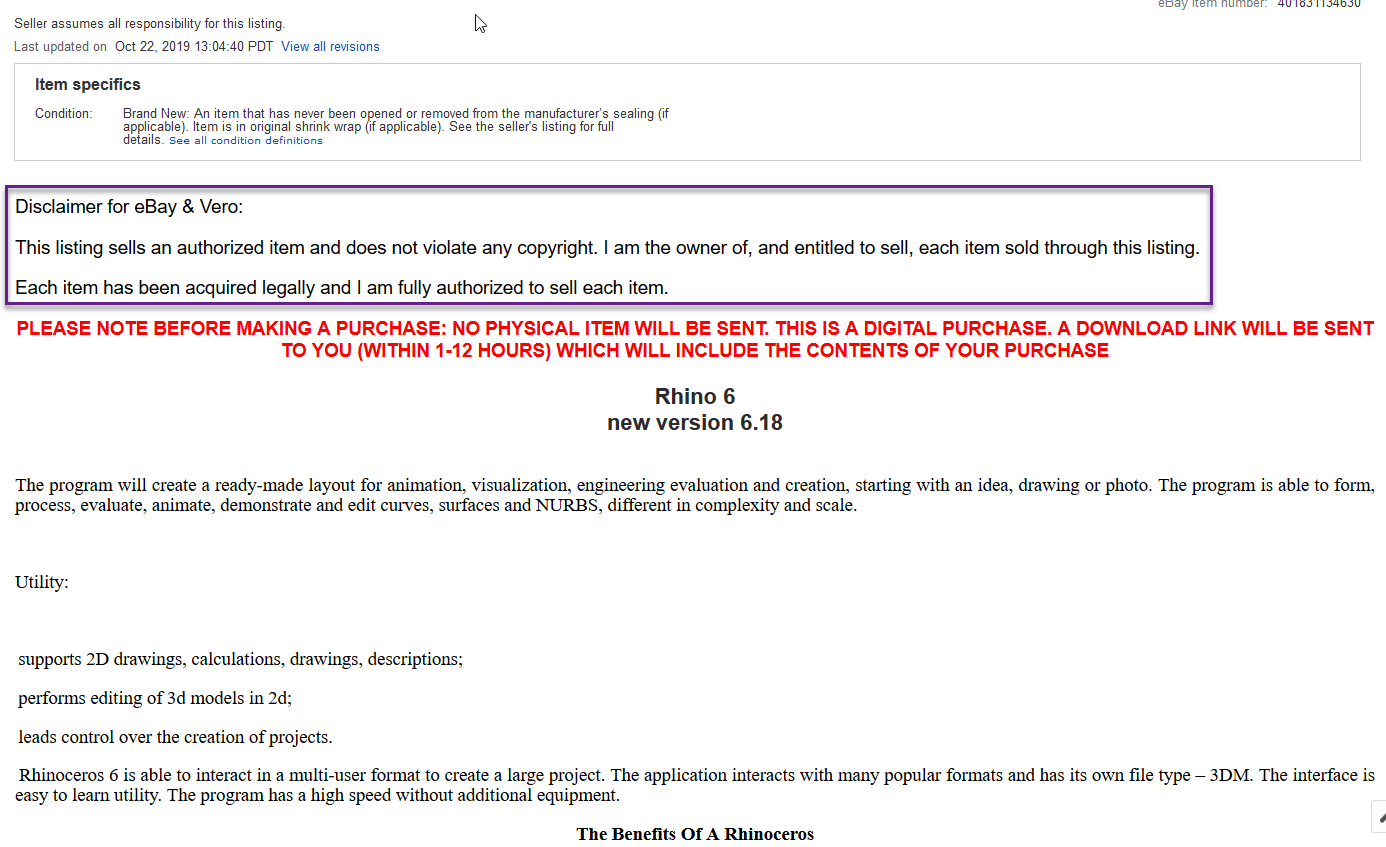 There’s no way this is legit in this case.

That would mean that either:

This has been going on for years, in a very public fashion. eBay has a policy against illegitimate material and pissed off buyers. The sellers have a very high reputation, given by us, satisfied consumers. 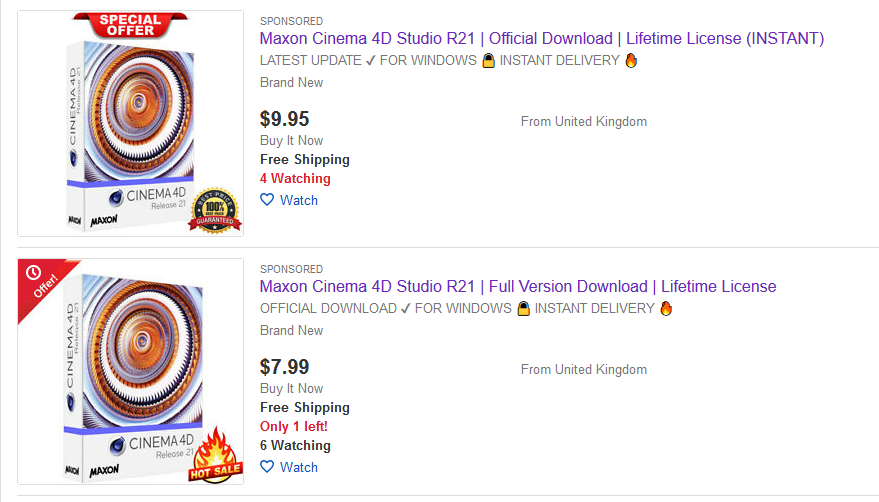 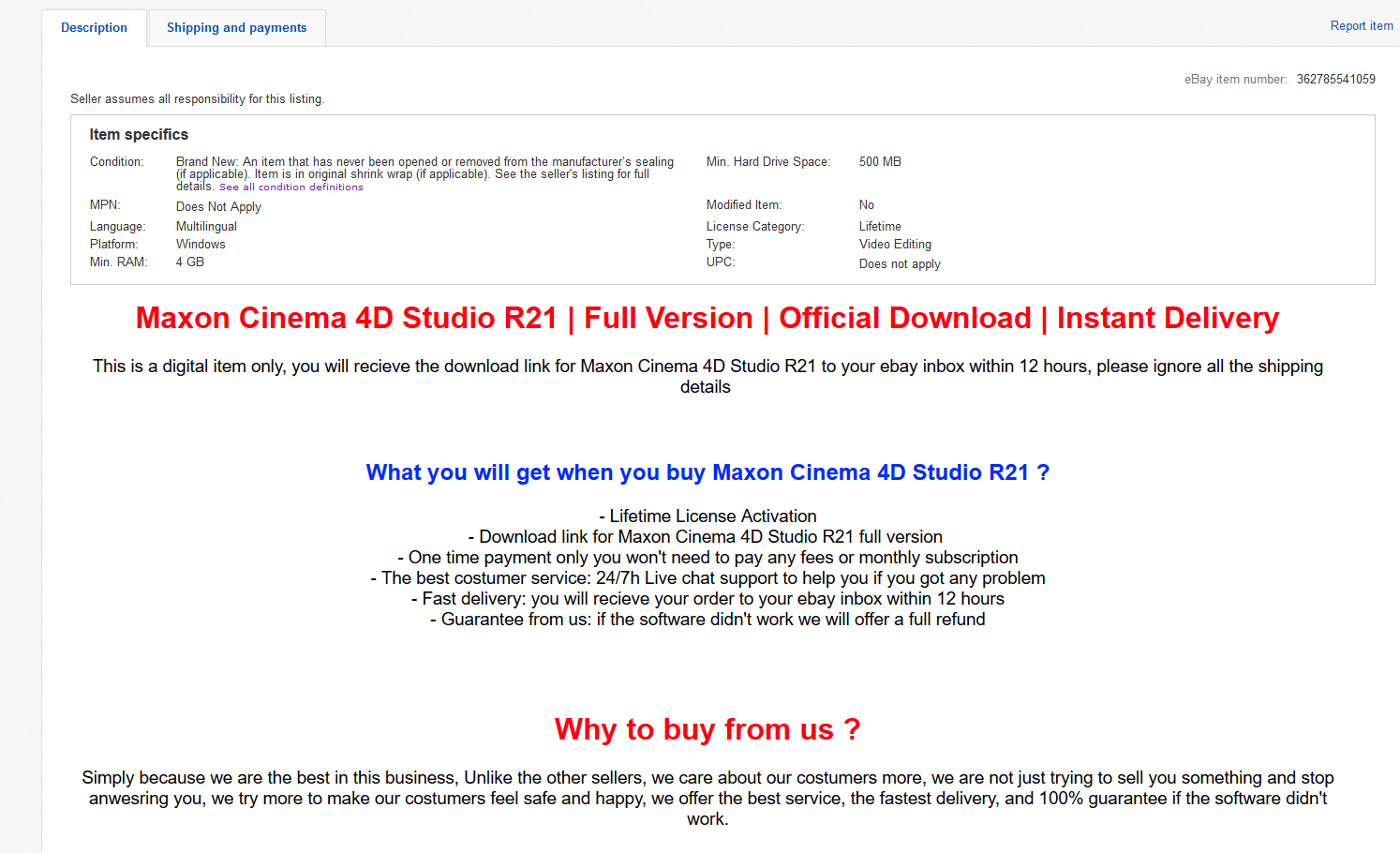 What point are you trying to make posting those Ebay pages?

Just because a software pirate has a good reputation given by their customers doesn’t make them legit.

Maxon knows piracy happens and doesn’t appear to give 2 sh!ts. Over on the Redshift forum pirates are actually assisted in locating the crack file so Redshift functions correctly. It absolutely pissed me off to see this happening.

Maybe I’ve got it wrong but what legitimate reason should a user have this file c4dp_20.0。*。xdl64 installed? It’s a regular occurrence to see people rock up with C4D not booting and get told to remove this xdl64 file. I know what it does because one of the Redshift dev explained and it smells very fishy.

What point are you trying to make posting those Ebay pages?

What I posted is completely objective information (no value added) and you want me to add an opinion? Okay, I’ll bite.

Maxon knows piracy happens and doesn’t appear to give 2 sh!t

Maxon, Microsoft, Robert McNeel & Associates, and a very long etcetera. I checked and the only 3D app that I could not find on eBay is SolidWorks.

Does eBay know? Are they accomplices?

If I were in Maxon’s board of directors -or were stockholder- I would be very concerned about your comment.

The user dmcgavran is the CEO of Maxon. I don’t know what action Maxon may be taking against those ebay listings, but if he’s telling you the listing in question isn’t legitimate, I would listen.

If the deal seems too good to be true, then it probably is.

Maxon is constantly following leads regarding pirated versions and has taken down houndreds of sources over the years. Often enough the processes involved are tideous since many platforms claim to act against pirates but they don’t hurry to do so.
If anyone finds a suspicous offer please report it either to the platform , flagging content, or Maxon directly.
Posting this on a public forum just gives the pirate a wider platform so please don’t do this.

Maxon, Microsoft, Robert McNeel & Associates, and a very long etcetera. I checked and the only 3D app that I could not find on eBay is SolidWorks.

Does eBay know? Are they accomplices?

If I were in Maxon’s board of directors -or were stockholder- I would be very concerned about your comment.

A lot of the big platforms know piracy is happening and don’t have a proactive system of closing these accounts down and wait for users or companies who’ve had their software pirated to make a complaint. The platforms don’t really care as they’re making money. They are accomplices but with plausible deniability.

Many companies now consider piracy a thing to live with rather than beat, the pirates were never customers and there was never a lost sale. It’s sad but true.

Some of the biggest pirates of VFX Software are the studios, small companies like mine and freelancers tend not to be pirates. The Redshift licensing system is incredibly sensitive to system change, a Windows update can lock your license. It’s so sensitive because the clever people at VFX Studios will pirate it if given a chance. When you’re up against tight deliveries and you need another 10 render licenses for a short while it’s too tempting.

The Foundry are so concerned with piracy if NUKE detects it’s pirated it phones home and sends the Foundry a whole pile of evidence. The next thing the company gets a call from the Foundry’s lawyers and a demand for payment. There’s a write up on this forum somewhere on one case.

I’ve always been happy to pay for software, the company does right by me and I’m happy to support it’s development. If R21 was a good release we might have kept a license of it but it was a crap release so we didn’t. I don’t want it at $750 and I don’t want it at $7.99. Maxon couldn’t give it away.

First of all I’m not here about piracy but because of thread’s name.
I’ve got an odd situation about getting license from Maxon.
I’m from Russia and we don’t have on Maxon site any option here to get a subscription of any kind. The only 1 option is to get a perpetual license which costs 3567 EUR. This price is against 738 EUR for 1 year subscription option which we don’t have at all. Maxon’s support (both sales and customer supports) don’t know when it will be available for Russia. I can’t understand how it happennes and why.

I want to get 2 license by subscription for my company and if there’s any alternative way to get it legally could be nice to know how to do it mr. @dmcgavran.

Sad to write it but It’s not that at all now:
3D FOR THE WHOLE WORLD
When it comes to high-end 3D content creation, Cinema 4D has always been Easy to Learn and Easy to Use – a real-world solution for design professionals. Now we’re making Cinema 4D the Easiest to Acquire.

You are correct. At this point we offer perpetual in Russia. We are working on bringing subscriptions to Russia, but at this point we don’t have an estimate…
Cheers
Dave

TY for answer. Hope it will not get too long)