General approach to placing poles in a character mesh

I’m looking for general advice on where to place poles in a character mesh that will be animated. I’ve gone through the exercises in William Vaughan’s Topology Workbook and I agree with the author’s idea of aiming for almost all quad meshes but strategically managing poles and putting them in places where they won’t look strange after adding a subsurface modifier or animating the character.

The question that isn’t really answered by the book (nor have I been able to find a general answer to this so far) is…where should the poles go, generally speaking? I’d like to keep some rules in mind when I’m creating my topology. Even if any “rules” about where to place poles are largely opinions that are specific to each modeling artist, I’d still like to hear those opinions/rules to give me some ideas for my own workflow.

Here’s one example. It seems that a good rule might be, if you have loops that need to meet up and they don’t match evenly AND that particular area isn’t likely to bend when you attach an armature, then it’s a potentially good spot for a pole.

It appears that this approach is used in a lot of good topology. I highlighted the visible poles in the below image (this is not my model – sorry, don’t remember where I found it) where it appears to be doing that sort of thing. 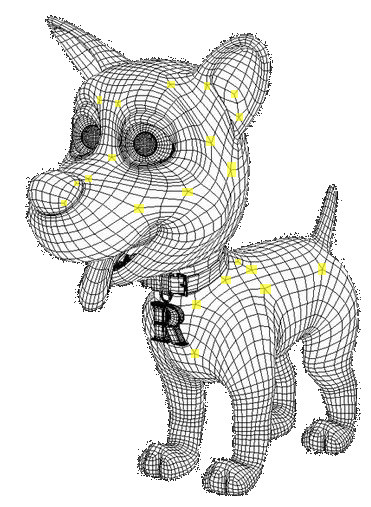