Hi, a coming project needs fluid simulation, dropping objects in water, pouring water on objects …
I’ve never used either Realflow or X-particles.
Which is the easiest to use? are they any pitfalls? I’m not looking for Hollywood grade simulation but something that will look nice quick.
Thanks

I was wondering the same thing some time ago.
After evaluation, I thought Realflow would be easier to use with better results.
X-Particles’ giant toolbox and possibilities seemed a little overwhelming in comparison.

I purchased Realflow, and I must say, that I’m not that impressed with the plugin.

On the other hand, X-Particles seems to…

So, I can’t really comment on X-Particles yet, but I will definetly try it out.
Realflow, yeah. Not impressed, sadly :\

PS: I’d love to hear about my assumptions from X-Particles-Users!

Hi Keppn,
Thanks for your input, good info you shared.
I have little idea in what I’m stepping in, you mention “have to invest massive amounts of simulation time” boy that sounds scary.

I’ve only got a 2nd gen 8 cores Ryzen in my main machine, can other networked computers used for X-Particle simulations?

I have a 32-core Ryzen; Realflow operates in realtimes with low particle numbers at first, but once you want to crank up the simulation for details, it wasn’t unusal to have simulation and meshing take an hour and (much) more. I have no idea about X-Particles’ perfomance in general, I would love to hear about that as well!

Really depends on your simulation. We’ve done paste being squeezed onto a surface and some water tendrils flowing along splines and they were quite manageable. Have not done things dropping into a volume or pouring water onto a surface. The more particles the longer it will take to sim, of course.

I’ve seen amazing fluid results from Houdini, and users say it is way ahead of Realflow. Is that an option for you? Scary learning curve I guess.

Nah, I’m not the sharpest knife in the drawer, so I don’t think Houdini is for me.
I need quick, not amazing.

I have both Realflow C4D and X-Particles, and have done a massive amount of testing of both products. As mentioned above, the biggest drawback to Realflow C4D is the utter lack of communication and support from NextLimit. Their user forums are totally dead, and I’m always wondering of they’ve already EOL’d the product and just haven’t announced it yet.

Overall, X-Particles is a better value as you get a much larger toolset that goes way beyond just fluid simulation. I also agree that their customer support and frequency of updates is superb. That said, there are still a few distinct advantages to Realflow. First, the performance of RF in production quality sims is far better than XP. It has GPU support which XP doesn’t (yet), but even running on the CPU it is simply much faster. With fluid sims, speed = quality as you’re going to get more tests done and more opportunities to make changes along the way. I also find it much easier to set up a realistic sim in RF than in XP. XP just requires a lot more fiddling around, both in the simulation and in the OVDB mesher, to get realistic results. RF also has specialized solvers for Viscous, Viscoelstic, and Granular sims which I find superior to doing those things in XP. If I were given the assignment you outline above, I would more than likely do it in RF rather than XP, and just deal with the fact that I have to work in C4D R21.

One big advantage to XP is the fact that your fluid sims are going to be compatible with the much larger toolset available in XP. XP has gaseous simulation via Explosia FX, plus their own dynamics and cloth system. Depending on your project this could be a big advantage. Foam in XP is also much more straightforward than in RF where you have to kind of cheat it. While XP has 3 different fluid solvers, I find both Fluid FX and Fluid FLIP to be too slow to really be viable for production quality sims. They’re fine if realism isn’t a huge concern and you can keep the particle counts down, but when you load them up with particles they bog down much more than RF.

Anyway, while I feel like there are still definite advantages to RF, it’s hard to recommend it given the lack of support and questionable future. If I were you I’d probably go with XP. Given their track record they will likely erase any advantages RF has before long.

You should also consider Blender. The new 2.92 have a new sim algorithm APIC that seems better than FLIP

I agree that APIC is generally better than FLIP. XP’s Fluid FLIP has an APIC option (it’s the default) but as I mentioned, I think it’s still to slow in it’s current form to be truly useful.

Maybe try it in Blender, the guy there says it is should not be different from Blender FLIP.

Realflow, easy but slow. Its a bit of a rabbit hole when it comes to fine tuning as you probably wont be happy with a blobby goop of mesh and refining can take quite some time.

X-Particles are great, a bit more technical but easier to get simulation times down and finesse. Still much easier than houdini or other particle systems.

I would say if you can combine X-Particles with Krakatoa you will have a great combination. This way you only need to simulate 1/1000th of the particles, krakatoa will do the heavy lifting and you can get some great results. Takes a few days to get your head around but you will be pleased with the results.

Probably a stupid question, but why are fluid sims so painfully slow to work with? I’m thinking of how great fluids look in modern videogames (Last Of Us 2) and they interact with player characters in realtime, is there any way of achieving this kind of feedback in a desktop 3D app? Unreal Engine?

There is another alternative: Storm. It’s a great little particle simulation app being created by one guy. It’s got an idiosyncratic interface and a steepish learning curve (although it’s way better than early releases) and it handles loads of particles with ease. In this shot there are 250,000 particles and I can still navigate in the interface, smooth as silk.

It has a great mesher (better than both XP and RF, I’d say) and exports to Alembic, PRT and BIN files. 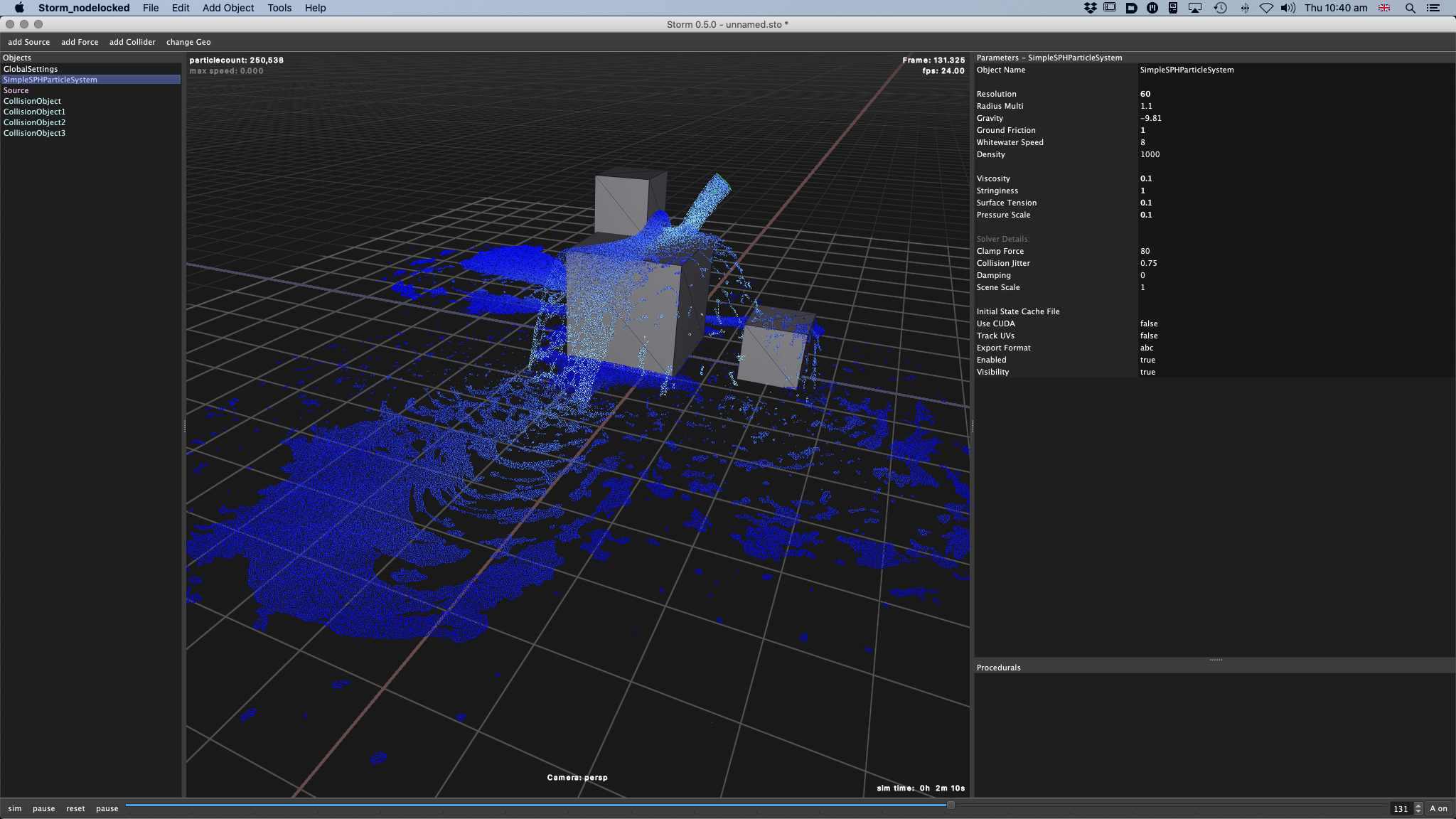 s then Realflow is way better

You should also consider Blende

i have used xparticles for years and is a nice tool to have, but i have never ever ever ever managed to get anything realistic from it. no cloth sim, no smoke/fire sim, no water sim. if you are serious about simulations i wouldnt recomend xparticles.

In this shot there are 250,000 particles and I can still navigate in the interface, smooth as silk.

What system do you have? in general for simulation applications things should start to be heavy at 1M particles.

i have used xparticles for years and is a nice tool to have, but i have never ever ever ever managed to get anything realistic from it. no cloth sim, no smoke/fire sim, no water sim. if you are serious about simulations i wouldnt recomend xparticles

This is why I recommend combining it with krakatoa.

You will never have enough particles for realistic fluid unless you have a particle accelerator/multiplier such as krakatoa. Houdini/Realflow all use particles for fluid/smoke etc which is then converted to mesh or volumes at some point for rendering - thus more particles more realistic.

This is why people complain realflow is so slow, because its doing the meshing process for you instead of doing it yourself via vdb or some other method which may be faster/modern. Even in realflow at a low resolution it looks blobby and crap, you need to increase it by the millions which in turn takes very long. Krakatoa can do this for you extremely quickly using some rough calculations as to where it needs more data and then when you mesh it it looks thousands of times better.

Either way, there’s plenty of options out there to choose from. This was my suggestion as I have used all of the above software and the quickest easiest results were from particles > krakatoa (any particle system that uses multi-core or gpu). Houdini can give you great results but can lead you down the rabbit hole fast if you need fine adjustments, blender is slow, realflow is the easiest but the meshing method is a bottleneck, etc. All my opinions from experience keep in mind. You could also combine realflow with krakatoa, never tried that myself however - I assume in this case you are working with particles only and meshing some other way.

Following up on the above, Realflow | Cinema 4D is now compatible with R23. While I’m glad NextLimit went through the trouble of updating RF | C4D, I’m still baffled at their utter lack of communication regarding this product. I received an email telling me about the update, but there is zero press about it anywhere, and there’s no mention of it on their website. If this product does indeed have a future, they are doing an excellent job of convincing me otherwise.

True words, it really feels like Realflow is on it’s last straw. Apart from the mail, there’s zero information about R23 compatibilty.

Meanwhile, I had a trial romance with X-Particles; their training and documentation is so fantastic, it was really fun to learn the system. So far I have only tinkered with the fluids and some basic ‘embers in the wind’, but it’s quite fast and I get quickly to my desired look.

Right now I’m rendering a stylized ocean splash with a million particles + additional foam particles; and the motionblurred foam really sells it (and wouldn’t render correctly with Realflow). 10 minutes to cache the particles; the mesher is so fast, it doesn’t even need to be cached.

So far I’m really surprised by xParticles. And there’s a 50% sale going on right now…

Keen to see some renders you have so far!