Just put up two more videos and here is the mesh that I use for my base start for my
characters. This is just a flat plane that I can punch out into the 3d design.

I’m so nervous about that pole at the junction of the cheek - i’m amazed it works! I’ve been trying to push the poles as far away as possible. - trying to keep to the edge loop Bay Raitt put out a few years back - especially around the mouth.

Site is down for the moment

I just put up the first of twenty or so Articulation videos on Vimeo. These will be part of a new section on my web page. This section will cover Articulating the face but I have not launch the web part yet.

This is really like a master course in modeling… thanks so much for doing this!

But, one thing… I only see 4 videos on the Vimeo channel… you said there are twenty somewhere?

[/QUOTE]But, one thing… I only see 4 videos on the Vimeo channel… you said there are twenty somewhere?[/QUOTE]

There are more but I am going to try to launch them with parts that I finish on my web page.

There are more but I am going to try to launch them with parts that I finish on my web page.

OMG such a helpful thread…

My site is dwn for the time being.

Ahhh… cool to see the mask in action! (BTW, love that white board of yours!)

Looks that way. The Vimeos are password protected, and the facial animation pages are all now marked “Under Construction.”

Maybe he decided to move them off of Vimeo, and it is in process?

Hi guys! I wanted to let you know you can take a look at how I rig faces. Here is the walkthrough of the rig:
http://www.youtube.com/watch?v=LSYq5U7bptw&feature=channel_video_title 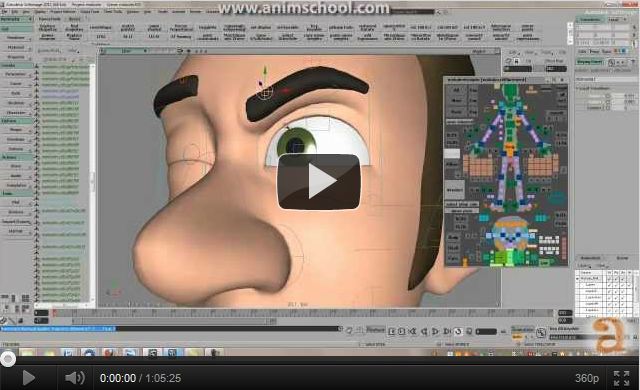 AND you can download the rig here (except for certain uses described there):

Back from the dead. Joint based set-up I’ve been working on for a while now.

All are down at the moment except the intro to “Modeling for Articulation”.

I just updated one of my pages with a few mesh designs.

Has anyone looked at combination sculpture. From my understanding because there is a separation of pose and weight you can have 10 weights/dimensions driving 100+ poses.

All are down at the moment except the intro to “Modeling for Articulation”.

I just updated one of my pages with a few mesh designs.

Glad this is coming back online… it is really a remarkably useful site of information… thanks for sticking with it!

(Now you need to get your colleague Rich Hurrey to include this in his new rigging tutorial!)

I’m recearching a facial animation right now. I need to create realistic human face animation (not a cartoon one) for my project, mocap+keyframes. So, I’m searching for a best way to do this.

Right now I’m choosing among facerobot in softimage, or bonyface in max, or custom morph\bone rig in either of them, or even something more advanced, like muscle-skin systems. I’m reading through this thread, but god, there are 60 pages, it would be great if someone just point me in the right direction on this matter.

What is the best approach for realistic human face animation for a CG short aiming at photorealism, possibly using mocap?

Presonaly, I really like Blur’s facial animation, they use FaceRobot. But maybe there is no need in this, and I can stick with 3ds max, since all the rendering will be done there…

I would certainly not even try muscle or any other simulation based systems, far too slow viewport feedback for animation work.

I also wouldn’t recommend bones. The best bone based realistic facial animation I’ve seen is in the Uncharted games - but they’re basically emulating a blendshape / morph based system complete with corrective shapes, because the Playstation console doesn’t have enough resources to implement it (mostly memory).

We did some quick tests with Facerobot but abandoned it because our animation is done in Maya (the entire pipeline too) and it would have been far too complicated to interface the two.
You want to animator to be able to modify the head, neck and eyes too, and follow things with a lookAt type control, so we’d have to move a LOT of stuff into Softimage and replicate functionality and rigs, then move the whole thing back… Blur has an easier time because their entire animation pipeline is XSI, they export vertex caches back into Max where they do lighting, rendering and FX.
By the way, according to their character artists the Far Cry 3 trailer used regular blendshape rigs too and no Facerobot. They did not really explain why, though.

So what we’re using and what I can recommend is blendshapes. It has worked reasonably well, we’ve recently wrapped a project with a lot of facial animation, lip sync and some close-up shots, and we ended up putting a lot more effort into polishing the animation compared to how much tweaking the shapes have seen, based on the sups’ feedback. There was an additional layer of clusters to tweak stuff but the animators have never really used it, the shapes were enough for what they were doing.

Truth be told I’m still fairly nervous about the reaction once it goes public, but I firmly believe in the approach. The rigs are fast even with 18-20k polys in the head, the rig is robust and easy to tweak and modify, although you can definitely speed up the workflow for corrective shapes with some scripting and automatization to propagate changes into the various correctives. Chaining up several blendshapes also allows for trickier stuff like sticky lips and such so it’s also quite flexible. The kind of thing I wouldn’t use this for is opening the jaws of a crocodile, but it’s good for almost everything else, particularly human faces.

I would go for the Face Robot if it needs to be realistic face with mocap, after all it was made for it, you can cache out everything and render it wherever you want…