I’m trying to use downloaded materials in the asset browser to render in redshift. Some of them come out to be right, others come out to be a glossy blank material.

What should I do to resolve this trouble?

You are trying to use C4D standard Material in Redshift that’s why! Use Redshift Materials in, er, Redshift.

Okay. Actually I couldn’t get separate redshift materials in the asset browser. They are just listed under materials panel without any classification of standard or redshift.

I have no experience of the Asset Browser but can you not make your own sections or at least rename your materials to denote standard vs Redshift Materials?

It’s obvious what the materials are from the available material options in the bottom right of the screen when you click on them.

Redshift had a material converter way back does it still ship with one? It was best avoided however. Sorry, I’m out of the loop with C4D material developments so I don’t know how easy it is to convert standard materials to RS materials via the new node editor. Now that Maxon ships Redshift CPU as the preferred renderer you’d think they ship a rock solid converter for those with large libraries of standard materials. (Maybe they do and I just don’t know it.)

I have no experience of the Asset Browser but can you not make your own sections or at least rename your materials to denote standard vs Redshift Materials?

Yes. That can be done. I can make folders in the asset browser and sort my materials accordingly. So far whatever downloadable materials are displayed, they have no mention of standard or redshift. In 8-10 materials that I checked, all are standard ones and not redshift. 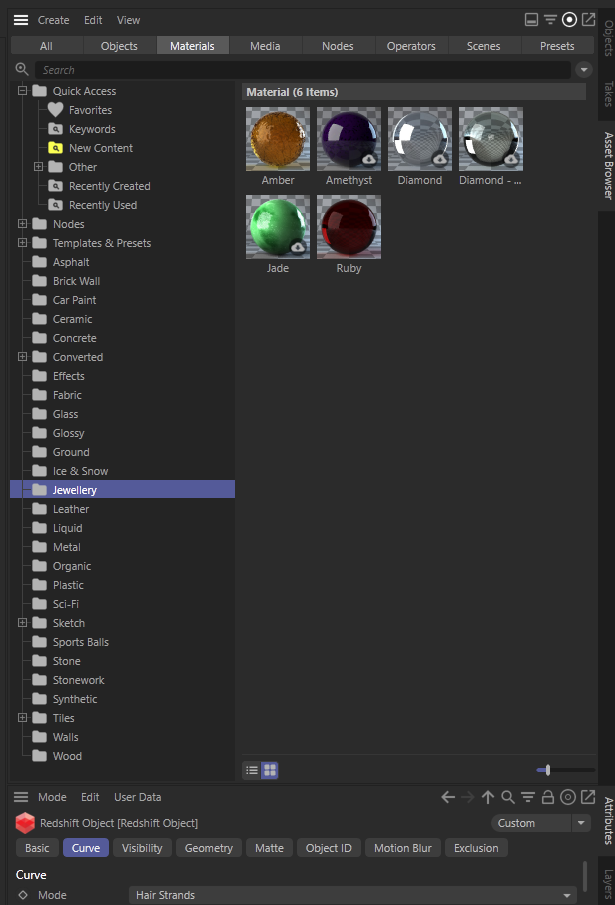 Redshift had a material converter way back does it still ship with one?

Yes, if you check at 2min 40 sec in my video, when I try to convert this standard material to redshift material using the material converter in the drop down mentu, it becomes glossy black.

Yeah, the converter was never very good and only worked with very simple materials but, as I said, maybe now that Redshift CPU ships internally Maxon will have a reason to develop a high quality material converter for those who have large material databases.

I think you have to assume materials are standard materials unless stated as Redshift materials.

Maxon will have a reason to develop a high quality material converter for those who have large material databases.

It’s a mystery why they haven’t done it till date. Also if Redshift material converter isn’t working for standard materials, what exactly is it purpose? Like, it converts arnold and octane materials better?

I know you don’t work with standard materials from the asset browser, I’m asking like in general to all of the users here.

Now that Redshift CPU ships natively in C4D it’s in Maxon’s interest to move its userbase from Physical and Standard renderer onto Redshift CPU. This will mean they can remove a ton of legacy rendering code. The easiest way to do this is make Redshift accurately parse Standard materials. How difficult can that be?

This surely has to be a goal of the move to Redshift to provide seamless standard material compatibility with Redshift.

There is stated the intention to bring sketch and toon to Redshift which will doom Standard renderer once and for good so there will eventually be one option for rendering, Redshift CPU.