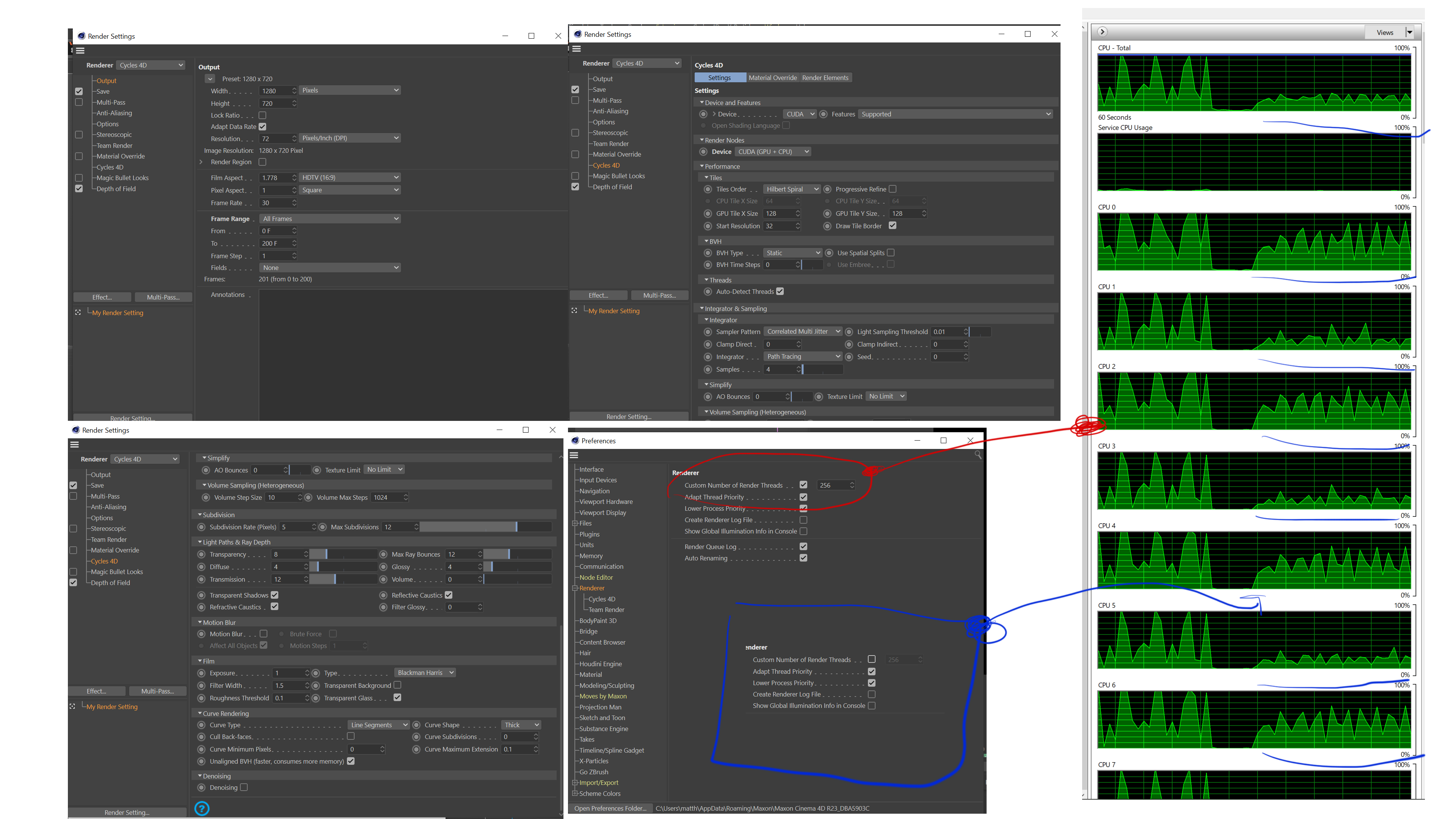 When rendering, is it optimal to have a cpu utilization rate of 100%?

I notice that my cpu will upregulate 100% and then downregulate to around 10%. It continues in this way till the render is done. But, I noticed that having a custom thread count can increase the cpu utilization compared to leaving it unchecked. (just an observation) I thought that I read you could decrease the thread count in the interface preferences to help the machine save cpu for ancillary tasks while rendering. But, I noticed it does this see attachment to the cpu utilization.

I am trying to figure out if running a cpu at 100% is ideal.

If it is not ideal, what render settings would be recommended to put a threshold on max performance of rendering to allow for longevity of your cpu?

Cycles is 10x faster w/GPU. I have no idea why you are chasing details of a CPU graph. What the hell are you doing?

Your question about the longevity of the CPU is pure silly-zone. Choose how you want to render–GPU or CPU…and let the computer do it’s thing. You are not qualified to out-think (or “manage”) how your computer is handling tasks.

“ in almost all cases you will see no difference between renders carried out on the cpu and those carried out with cuss and open cl renders.”

What is this video supposed to tell me… we don’t even know the core # or the gb for the msi. This guy probably has a better cpu than gpu… and the results show a better benchmark score for the cpu…which would make sense if that was the case… but doesn’t support your point about gpu being the better option. I ran amd 3970 and a msi 3090 to compare and the benchmarks were within 2 sec of one another.

You didn’t test properly. A 3090 is orders of magnitude faster…w/all the CUDA cores, the specialized RT cores…and the superior Nvidia de-noising. No competition. If you watch any Maxon videos of the last 3 years…you will find virtually w/no exception that the instructor/artist is using either Redshift or Octane. Why? Superior GPU speed. Insydium Cycles is not quite as performant as it is OpenCL based, but does offer GPU rendering.

If you’ve invested in elite CPU and GPU you ought to also consider either Octane or Redshift. I know the Blender version of the Cycles renderer offers CUDA option, but I don’t know if that’s been ported over w/Insydium’s version.

Alright for anyone who has had to endure this question in the future. I did get an answer to this(not above in this thread)… so I found…It was my misunderstanding of setting up the cycles renderer but I did learn this from it => upping the thread count as shown above just makes your memory have to work harder. it’s better to leave auto detect threads checked and run the cpu normally.

That’s what I said in first post. My exact words:

let the computer do it’s thing

Sorry if I was harsh in my initial post. Doing a new PC build here and a couple of issues are making me particularly cranky. (including trying to buy parts right now). Anyway, no excuse for my tone. Do wish you success.

you did go a bit infograph there for a moment

You can buy a calculator and say let the calculator do it’s thing or you can try to understand the functions it’s performing. So… personally, I didn’t find your answer very helpful here. But I do appreciate the apology. Also I know there is a lot of stress that we’re faced with to date… Good luck with your build. 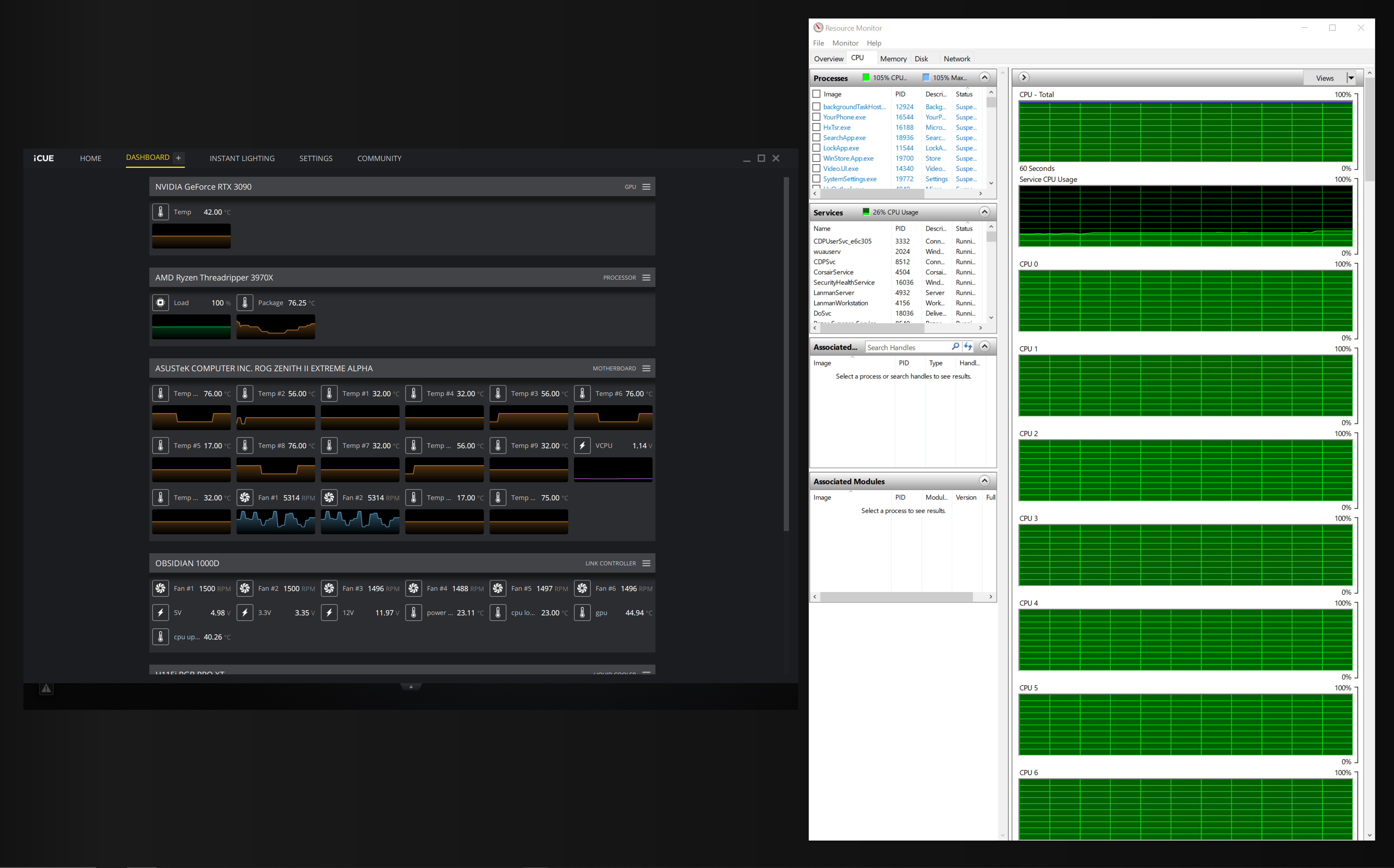 So, another update with the render speeds ( maybe more specific to my build rather than general render settings but it may be worth mentioning and helpful for some in the future so here it is:

I am using the rog zenith II extreme alpha and I found the pcie ports for the gpu run in a x16 x8 x8, x16 x16 x16, or a x16 x8 x16 x8 configuration. I had installed my gpu into the second pcie slot which I think was running at 8x broadband. The manual hadn’t said anything about it but I ended up finding out from the website there were those configs I listed above. So, I reran the blender tests and found that:

where-as when I ran it before they showed near identical time points. So, helpful tip when your making your build. Make sure your gpu is using it’s pcie port that has the maximum bandwidth.

so, icecaveman was actually saying something correct when he said that he expected better performance from the gpu. Now, I’m not sure how running the cycles render using the GPU+CPU mode stacks up against a pure GPU mode… but I’ll be sure to mention it in the future if I notice anything interesting to share.

idk why I said broadband… bandwidth!!*** excuse my oversight

you did go a bit infograph there for a moment

I know. I think I did. Needed a Snickers bar. Nothing worse than Infographian behavior.

This post was flagged by the community and is temporarily hidden.

Can we see your work?

As soon as ICM posts some of his ‘art’.

Some examples of my work are online if you know where to look but do give me your email address and I’ll sort you out with a private link that I send clients.

Can we see your work?

Most all of the work is older now, but here you go:

What a depressing place…

I wasn’t asking for you works, I was asking to Infograph, I was just curious…
Here are some of my works if anyone is interested… https://www.behance.net/3drenderandbeyond
I won’t be surprised if he won’t post anything at all, but I think that since he judges people by their works the least he can do is to show his works first.