Hi all, I’m having a problem with the Constraint Tag in R21. I’ll try to explain it as good as I can since english is not my mother language.

So I have to do a few simple character animations for a work, basically i have to animate a character doing some “robotic” movements, so I have the character and I uploaded to Mixamo to get a quick rig done. Then I imported it as FBX in Cinema 4d R21 and using the new Mixamo Rig feature I just “re-rigged” the character to animate it. When I have the animation done I wanted to replace the head for another element ( I did this before with the Constraint tag and It worked in R20) but I can’t figure out how to do it now because I can’t target the “head” because when I started de animation I did it with the “built in” animation Rig in Cinema 4D not from the Mixamo rigs.

So to attach an element with constraint is really simple, I just put the object that i want to be attached in a new null and then apply the constraint tag to that null with the following settings:!

The problem is with the target, since I made the animation in the “built in” cinema 4d rig I can’t target the “Head” join because I can see it in the object browser only “Pelvis”. How can I target that join?

The problem is that the animation I made is “separate” from the Mixamo joins, I’m very lost right now. Should i start from scratch and instead of use Mixamo rig, rig the character by myself? 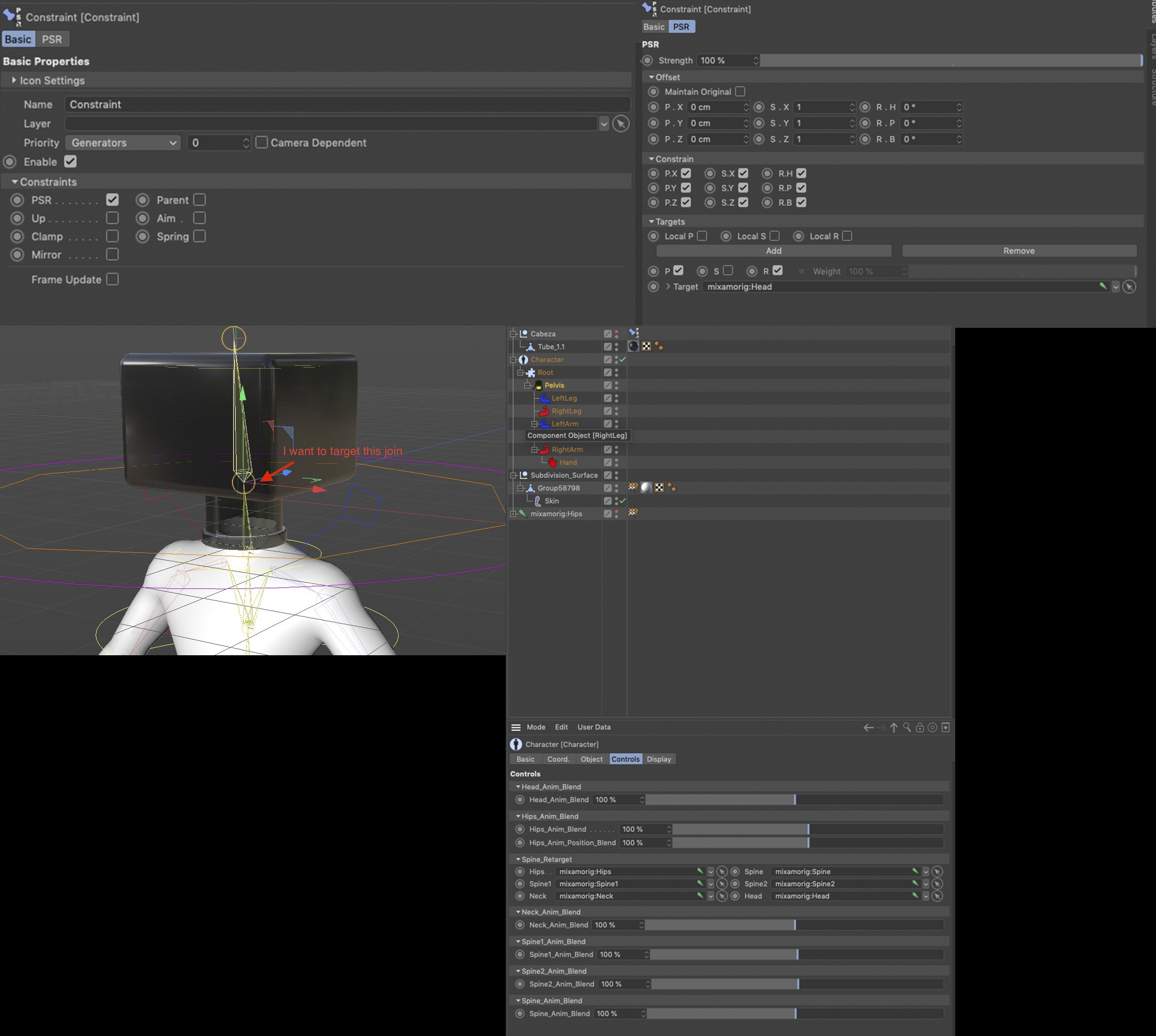 Thanks so much for your help!

Try clicking on your Character Object, then select the Display tab in the Attributes Manager. Under this tab will be a drop down called Managers and under the Object Manager menu, select “Component Hierarchy”.

This will reveal all the individual joints that make up the rig in the Object Manager.

Hi cmyk, thank you so much for your help, sadly still not working. I can see now all the joins but when I put the join in the constraint tag the object dont follow the join. Any other ideas what I’m doing wrong?

I’m getting nervous about this T_T 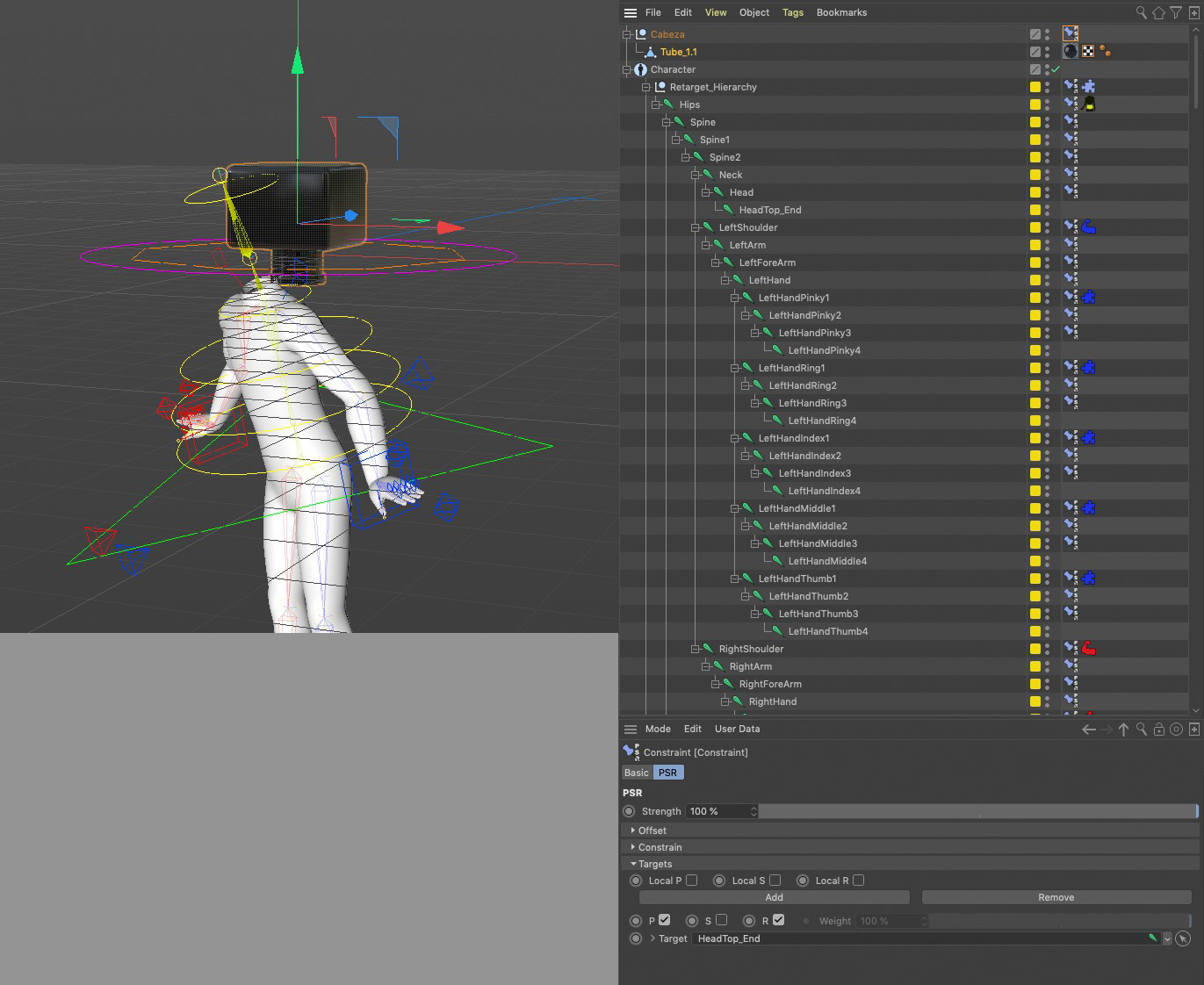 You should put the Cabeza null AFTER the object that it’s constrained to in the object manager list, at the bottom of the list. See if that helps.

Hi Decade, that what’s not the problem (I tried and didn’t work) the problem is that I’m a fckn dumbss and I put the wrong target, when I did the thing CMYK mentioned i saw what you can see in the picture, but there was ANOTHER target herarchy that was the correct one, not that one. So I just selected the wrong target because I didn’t know that the system made 2 different Hierarchy one is called “Retarget_Hierarchy” and the other one (the good one) its called “Bind Hierarchy”

So with the help of cmyk and your help we solved the problem.

Thank you both so much! 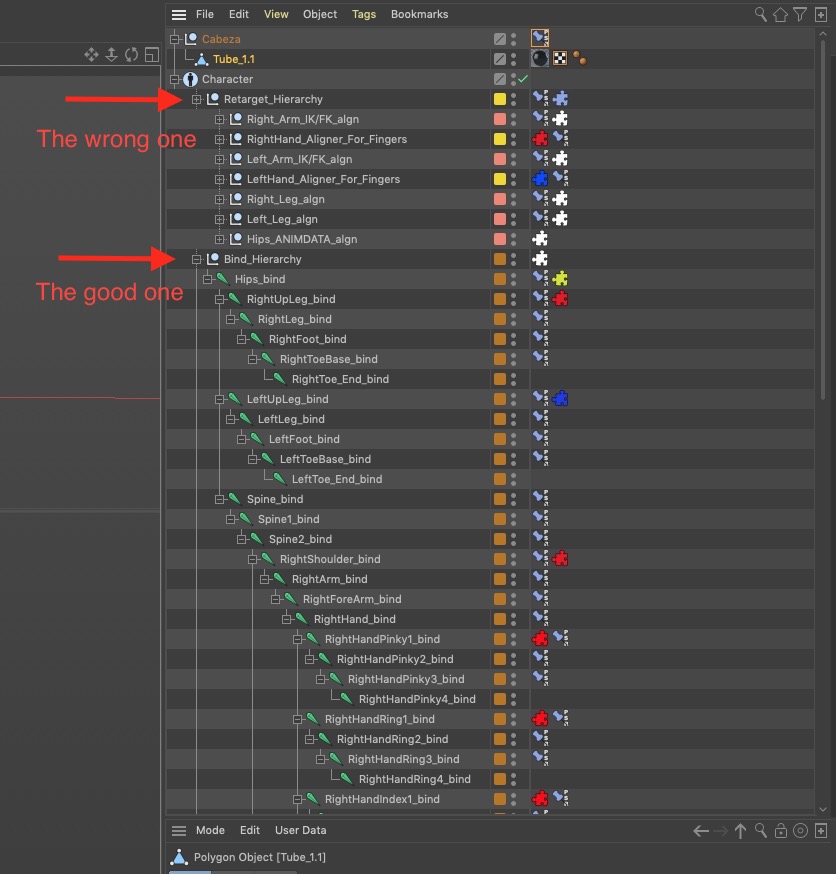 Great, glad to hear you got it sorted.