Behold!!! I give you Messiah for Mac! 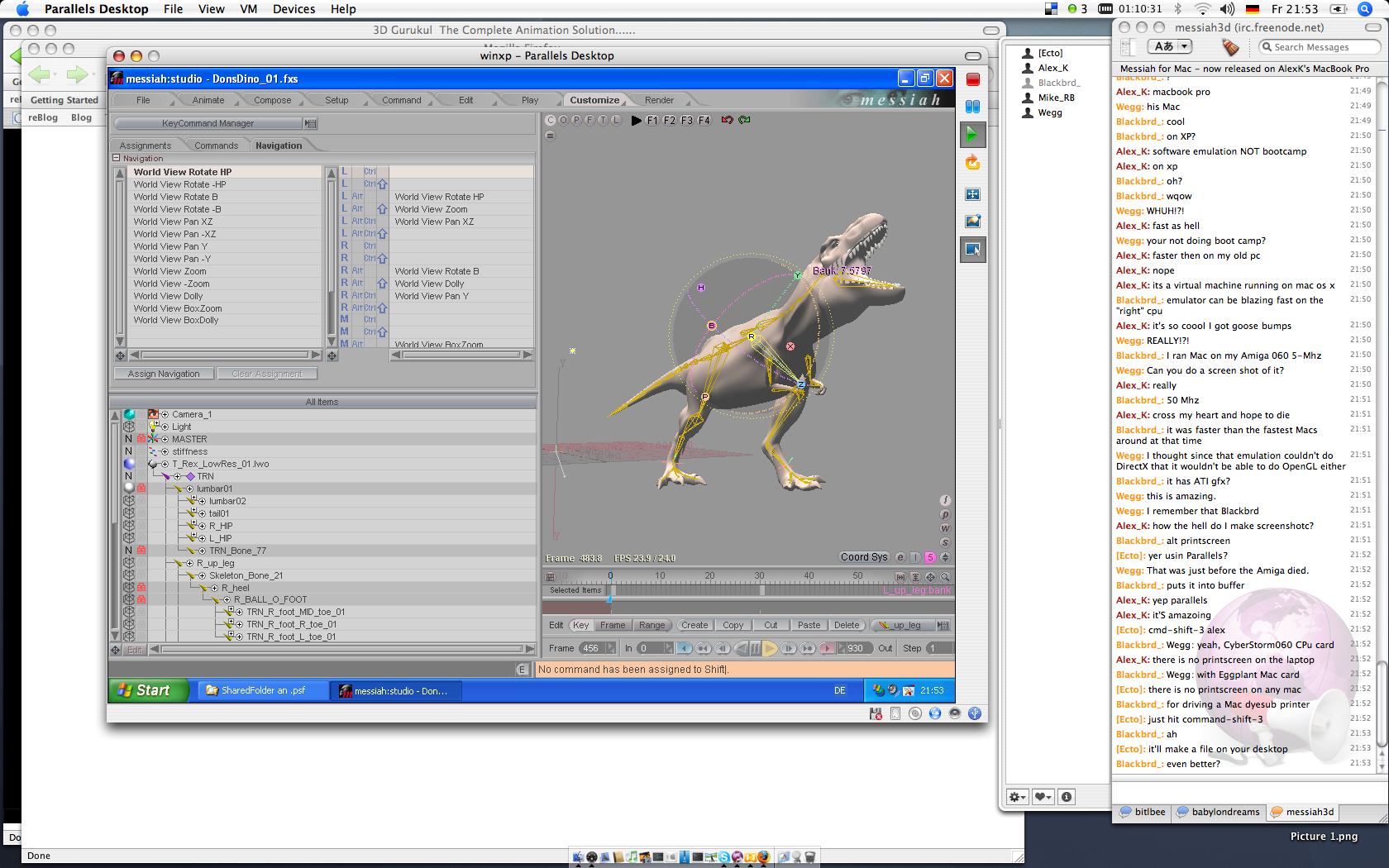 No Photoshop hack or anything. It runs without additional tweaking on a freshly installed Windows XP pro SP1. It was installed on a Parallels Workstation virtual machine software.

Cool. How well does it run?

Thanks for the inspirational screenshot!

No USB dongle issues then?

OK, I read the chat in the window on your screenshot - faaaast!!!

The first performance feeling is actually faster then on my PC Athlon XP 2100+ with a GeForce TI4200. :drool:

The only bug I have encountered so far is mouse interaction. When I grab a channel in the motion block or on the edit sphere, the values only grow (or shrink) in one direction, no matter in what direction I move the mouse. I it cumulates quickly to insane values. If there is no fix for this, it would be a real bummer. But so far I am very iimpressed.

How cool, the new Intel chips are really bridging the gap between PC and Mac apps.

That is REALLY cool. I hope you find a solution to that mouse interaction issue. . .

Does this mean that the age-old question of when will messiah be developed for the Mac? will now officially be a thing of the past?

No more pressure on pmG for OS X development — ever!!

Thats what killed OS/2. As soon as you could run windows (3.1) programs on OS/2. . . developers stopped writing OS/2 software. What would be the point?

I do think this is slightly different though.

I hate Windows. This “Genuine Advantage” thing is driving me bonkers. I have been in touch with Microsoft for weeks now trying to work this out. No solution. I own it. . . I have the stickers on my PCs that show I own it. . . but for some bloody reason Microsoft thinks I don’t on one of my machines so they cut me off from software/security updates. GRRRrrr!

I vote for a Linux/Unix port of Messiah. Ubuntu is a really elegant distro that is so easy to install and use. Messiah is already on the fringes of our industry in terms of user base. . . why not embrace a similar culture of computer users?

heh, the answer to that is windows xp corporate edition… good luck getting a copy.

Thomas, I was so upset with Microsoft after the Genuine Advantage thing first kicked in that I was bound and determined to get away from it. Ubuntu worked beautifully. . . “Official” Linux Nvidia drivers were very easy to install. In a matter of minutes with their package manager thing I had Wings, Blender and a few video apps installed and running. So then I moved on to Wine to try and get my windows apps over. Darktree worked perfectly. Messiah. . . didn’t even start.

I don’t get Vista. Shouldn’t an Operating System’s goal in its development to be faster and cleaner? Why do they pack more and more into the base install when that only slows things down and complicates things? And from what I have read. . . the popups that “help you” in Vista are far worse than in XP. And they drive me bonkers in XP!

Gah. . . I should shut up or I’ll waste another week exploring operating systems again.

All really cool in their own way. . . but none of them realisticly able to give me a stable platform with witch to work.

A big honking expensive Mac looks pretty damn good to me right now. Even if I’d have to deal with a little version of Windows inside of it.

Thanks again for sharing AlexK.

Here you go guys. A screencapture for all of you who want to see the actual speed of this baby.

At first the scene (generously offered by Wegg - it is a WIP, so don’t look at the animation itself, ok?) runs in MetaNurbsed geometry. Later I have it un-MetaNurbsed, and that run basically realtime. Even with two quicktimes running in the background, starting iMovie and capturing the iSight webcam. :love:

Quicktime 7 is needed for this or anything that is able to play a H.264 codec

Now that is a pretty busy desktop! :bounce:

Thanks for going to the trouble and sharing. I can see why you love this! I’ve been considering a MacBook Pro, and still am. And I’ve also been following Parallels virtualization software. Since I also do IT news editing I know quite early of these things but it is very good to actually see someone running it. I considered running Fusion 5 in this way and of course it seems I can indeed run so much more. Seeing someone having success with it while throwing so much at it gives me additional confidence to go this route. One reason for me to go Apple MacBook Pro is to replace my current Video Toaster with a mobile NLE option running Final Cut HD. That also opens up options for Shake and other pro Apple goodies too. I’d certainly like to be able to run the best of both worlds on one system - and a notebook at that.

Thanks again for sharing

There are a few focused linux distros. Ubuntu is highest on the list that I look at. It still has the issue of not being compatible with the applications that I use on a daily basis. Oh well!

I don’t know.
What exactly do I gain by running windows on a mac?
While it is funny as a proof of concept and offers a way to run things like the now extremely cheap shake on the same machine, I’m just as stuck with microsoft for those apps needing windows as I were before. The genuine-crap is as present when running it in an emulator as on a standard PC. And the emulator ads another layer of complexity to it.

Well, I can tell you what I would gain, if the mouse input issues can be resolved. I don’t own a PC anymore (because mine just died a week ago), so I am more or less relying on the Intel Macs right now. It runs equally fast, I can run it parallel to other software and don’t need to reboot or (even worse) another machine just for Messiah. All other apps I need for my daily work (well 98% of them) I also get for Mac - either in a native version or there is a program that does the same or even more.

So where is the big problem? I run Windows in the emulator and have no need for Service Pack 2 or any other security bells and whistles as I don’t need to connect to the net with this Windows - I have my Mac for that.

I just installed the old Service Pack 1 I had and everything runs fine out of the box for what I need. I don’t need all the update crap to run Messiah just fine, therefor I also don’t care about Genuine Advantage.
And even if I cared, there is a nice piece of software that comes from Microsoft specially for administrators called “Microsoft Baseline Security Analyzer”. It directly analyzes and downloads all your needed updates and stuff WITHOUT any Genuine Advantage crap needed. :wip:

So yes it would be a tad nicer to run Messiah natively under Mac OS X, but I can get Windows XP pro for I think 20 bucks from a reseller (if you buy it over the company) and pay 80 bucks for Parallels Workstation. That is way cheaper then buying another machine that is equally fast as this Mac.

I have a couple of really old macs. I went to the store and purchased the latest OS X for them and installed it on all of them.

That right there. Is the single best reason to use OS X over Windows.

No Genuine Advantage. OS X doesn’t dial in to mommy reporting on any hardware changes you have made to see if your still worthy to be running this particular copy of itself.

Tack on the fact that OS X is pretty damn cool, the new mac hardware is amazing and you have some pretty compelling motivation to see this Messiah on the Mac thing work IMO.

Some key apps are developed for Windows only, and there’s no getting around that fact. Running Windows inside OS X offers me a step up. Sure I didn’t get rid of the Windows OS, but now I have an environment where I have more scope for more pro media apps all on one system.

I’ll certainly not hold my breath for all the key apps to converge onto Linux although that has been one of my hopes for years. :shrug:

For me it’s a practical issue, not an issue of it being ideal. People can debate the ideal 'till the cows come home but Windows on Mac via Parallels virtualization software offers a tangible benefit for some - especially for Apple hardware sales :deal: