Attaching an object on both ends to other ones on a tank tread rig. Halp!

I am rigging a tank tread for a tank.
I am using align to spline and Xpresso to have the tread move along as my tank moves.
I am not using cloner (and don’t want to) instead I am using either objects or instances for the purpose of testing the rig.
The tank tread tracks have two main components. One is the “tread piece” (black color) and another is a “joint” (white color) with 4 bolts, each for each side protruding and going into the matching holes from the “tread pieces” around it.

So far I am very satisfied with how the tread works when it comes to the “tread piece” (black) component. But when I put the “joints” (white color) component it wouldn’t align properly. And it actually shouldn’t because of the way the pieces are matched they’re not designed to follow the same track.

I have previously thought of making a secondary spline just for the “joint” components. But I believe this wouldn’t be a good solution as I need to also have the spline change shape depending on the terrain so it would eventually lead to same misalignment.

What do I need?

I need someone to tell me a simple and most logical (so I guess not anything from dynamics bag) way to make the “joint” component be attached to two holes. One hole from the “tread piece” before and one after it. Sort of, to have 2 pivots that will hold it in place in relation to the neighbor objects and make it stick when these objects move along and rotate accordingly as if it would simply be in reality with these pieces built and simply the bolts put inside the holes to make it held there. This way however the tread moves and spline changes these bolts would always be in the right place – fitting inside the holes of the neighboring object. And yes I think I will need to do these bolts/joints/hinge attaching one by one. But as long as it plays nicely in the final rig then I’m up for it.

I am sure it’s something simple. Would it be best to use joints (as in character joints), IK, constraints or some Xpresso magic… or yet something else I’m missing altogether?

Here is a cut from the scene in question: [put scene file here] (I will attach the scene file when I get home)

And here is where I have the misalignment: 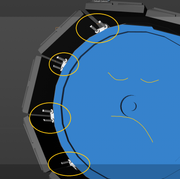 And here is where I would want the objects to be attached/joined/pinned/fixed together (the red X shows exactly where):

Figure B:
Here’s the desired result. X mark where the attached/fixed/connected points of the objects are. And by points I simply mean where on the object as it can also be an edge or whatever.

Please advise. And tank you in advance.
Marek

You could point (target) the connector at the next tread.