Agreed. I might also use some ideas from #1, #5 and #7 to come up with some more comps that could help me convey the desired look and feel of my environment. Thanks!

Yeah, I agree! These comps have a certain rhythm and flow that I was looking for in my story. The “tired traveller” idea also bodes well with them. I might do more comps just to experiment further with these elements. Thanks for the feedback

Week2 Richard Greenaway
great job everyone, some real effort goin into these… keep pushing your boundaries, I wish I could give a little feedback but just to busy atm hopefully in the next few days 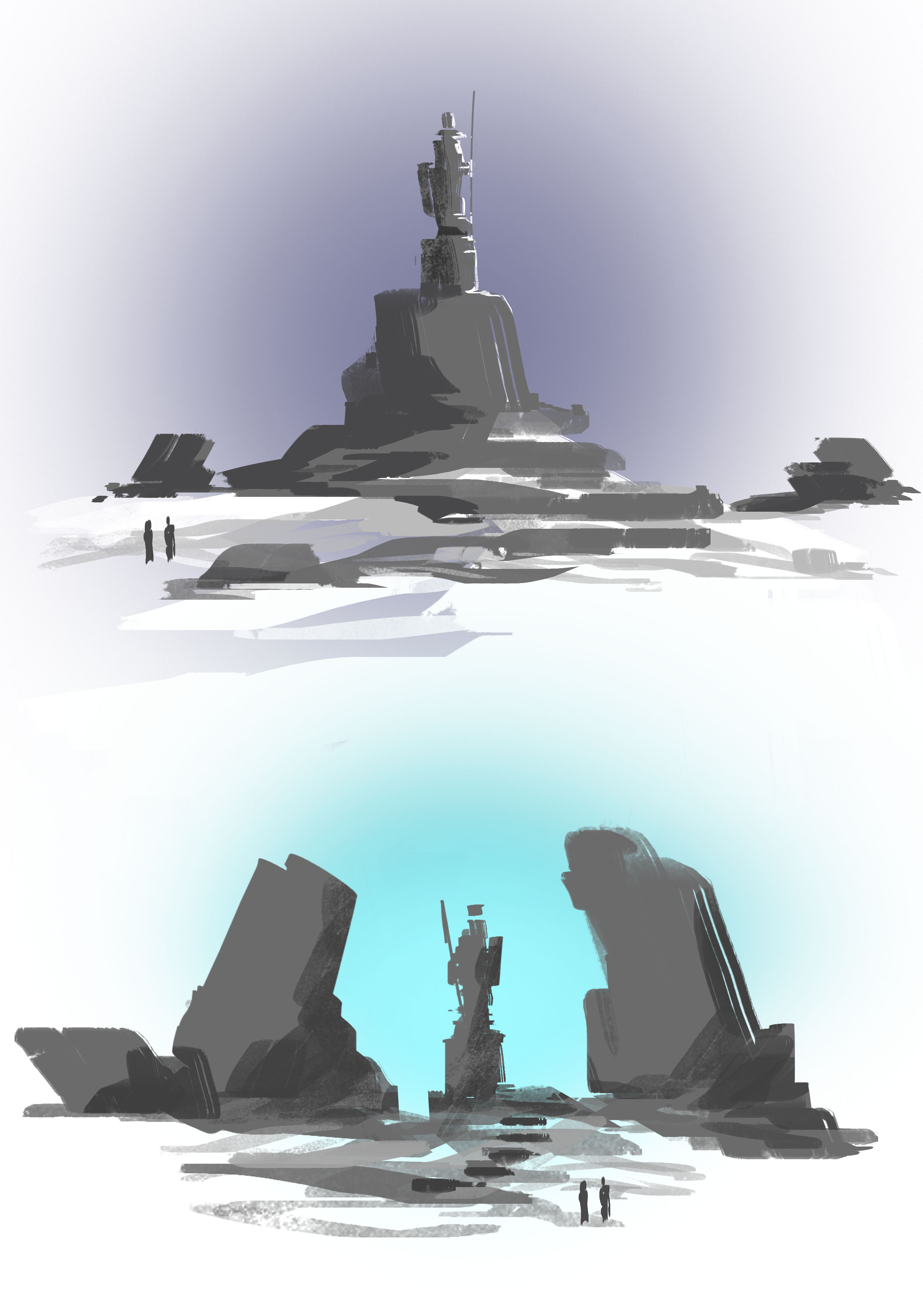 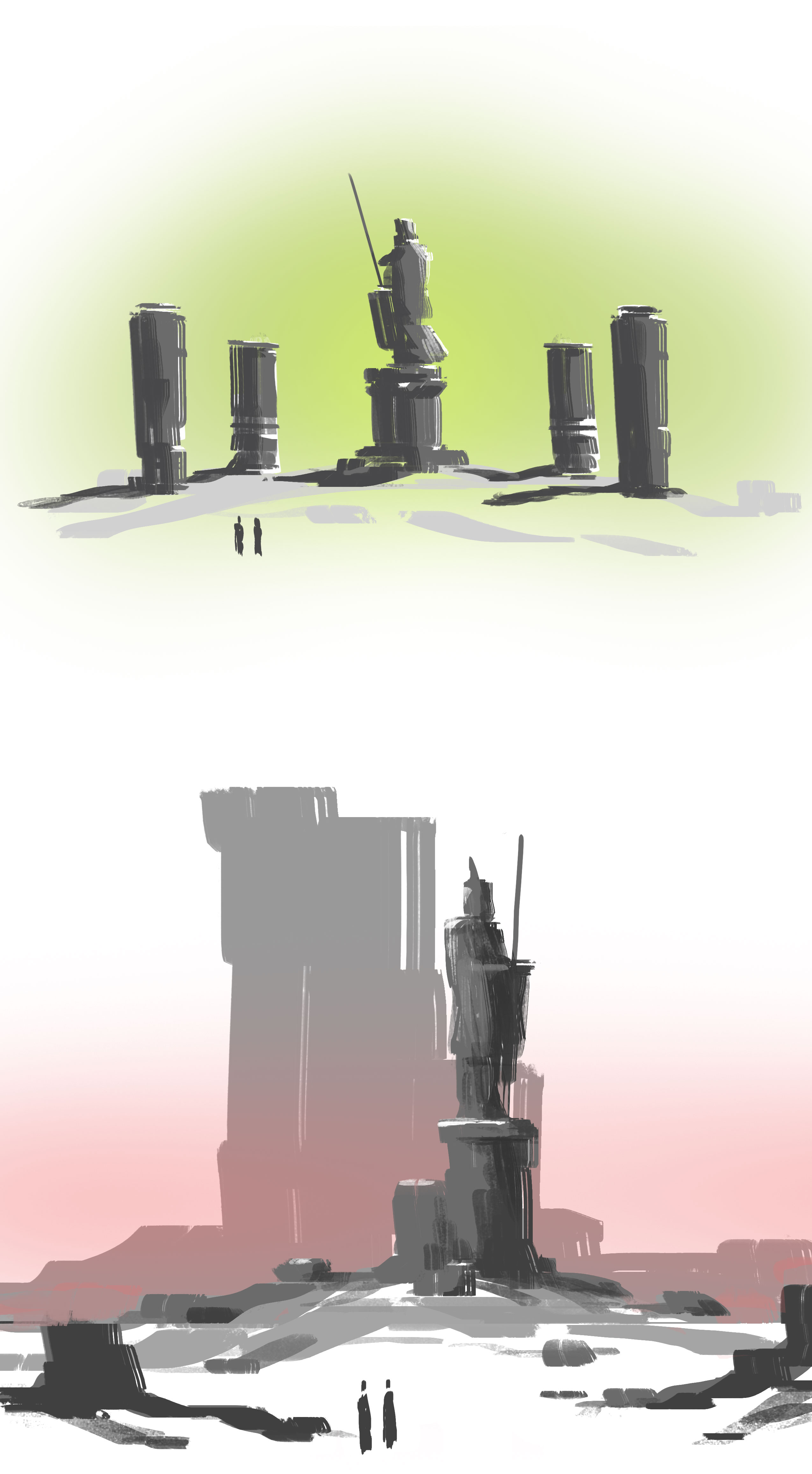 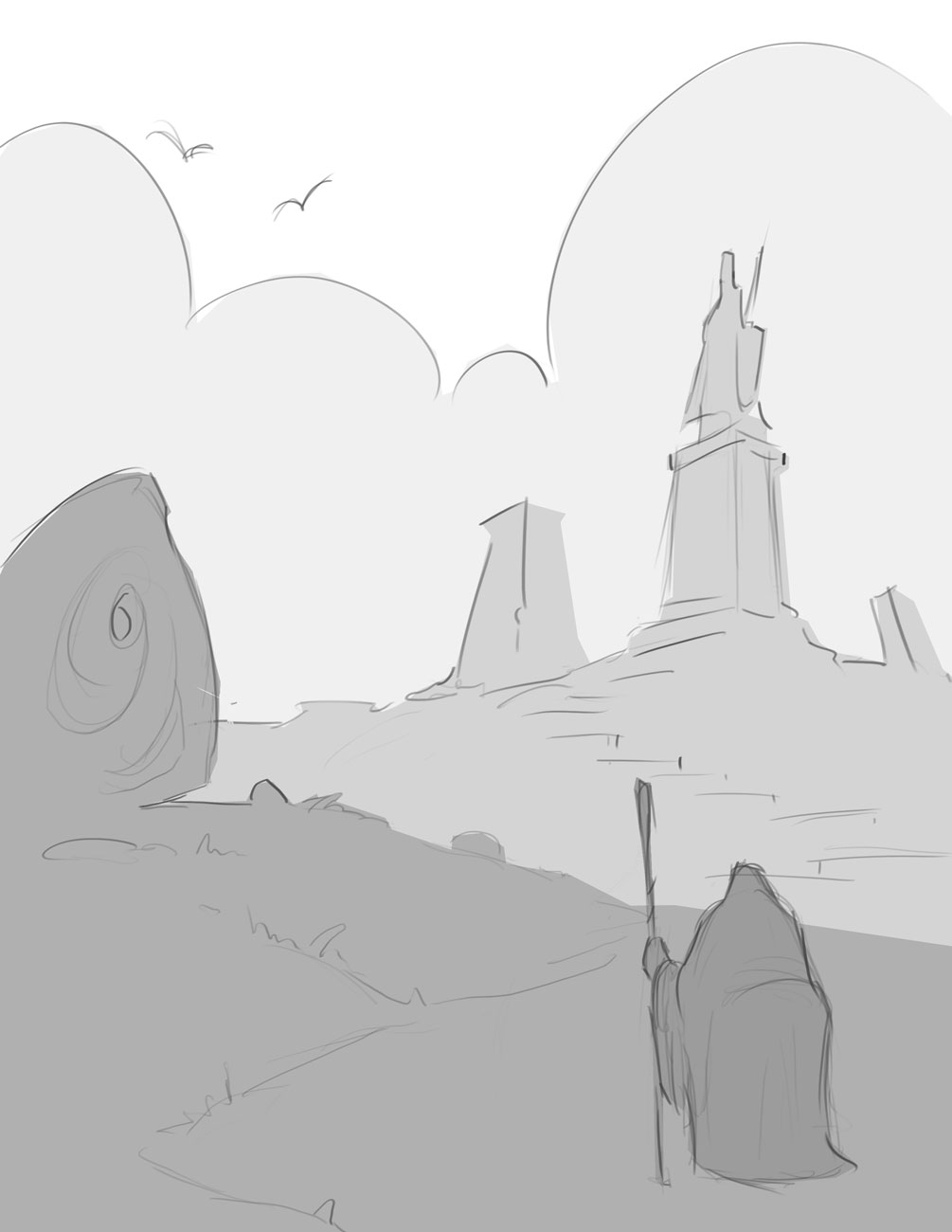 Keith Stanley | Week 2 Compositions
Still getting used to doing linework in corel painter and i dont really color in greyscale but i like the process of it and trying to learn new things. I chose the composition for the final concept to give a sense of scale and depth, and how the trees are above the clouds. The tree house i tried to make it look like the rooms were stacked or built ontop of each other and tried to give it a haunted mansion kind of look.
Any feedback i would appreciate, Thanks! 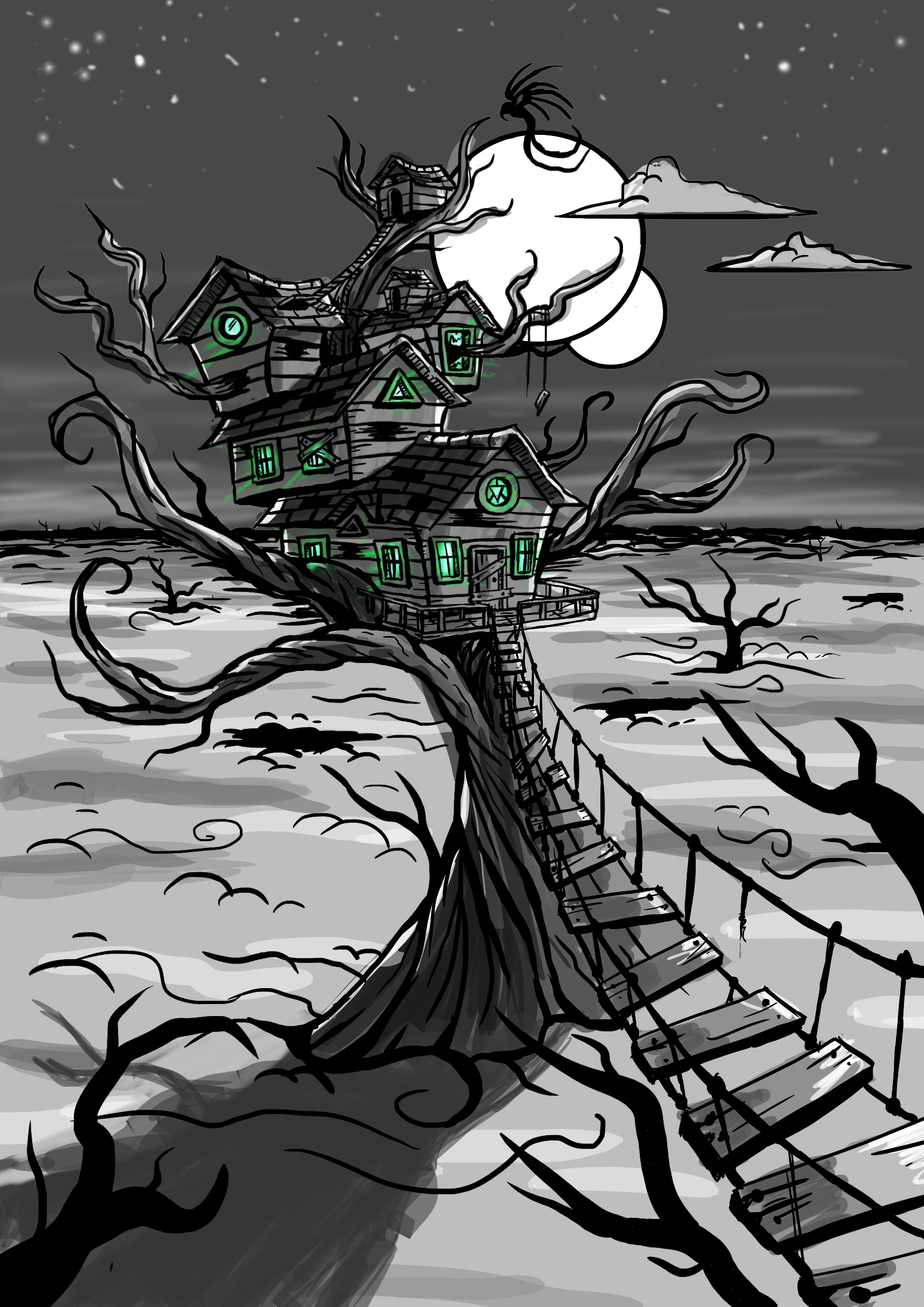 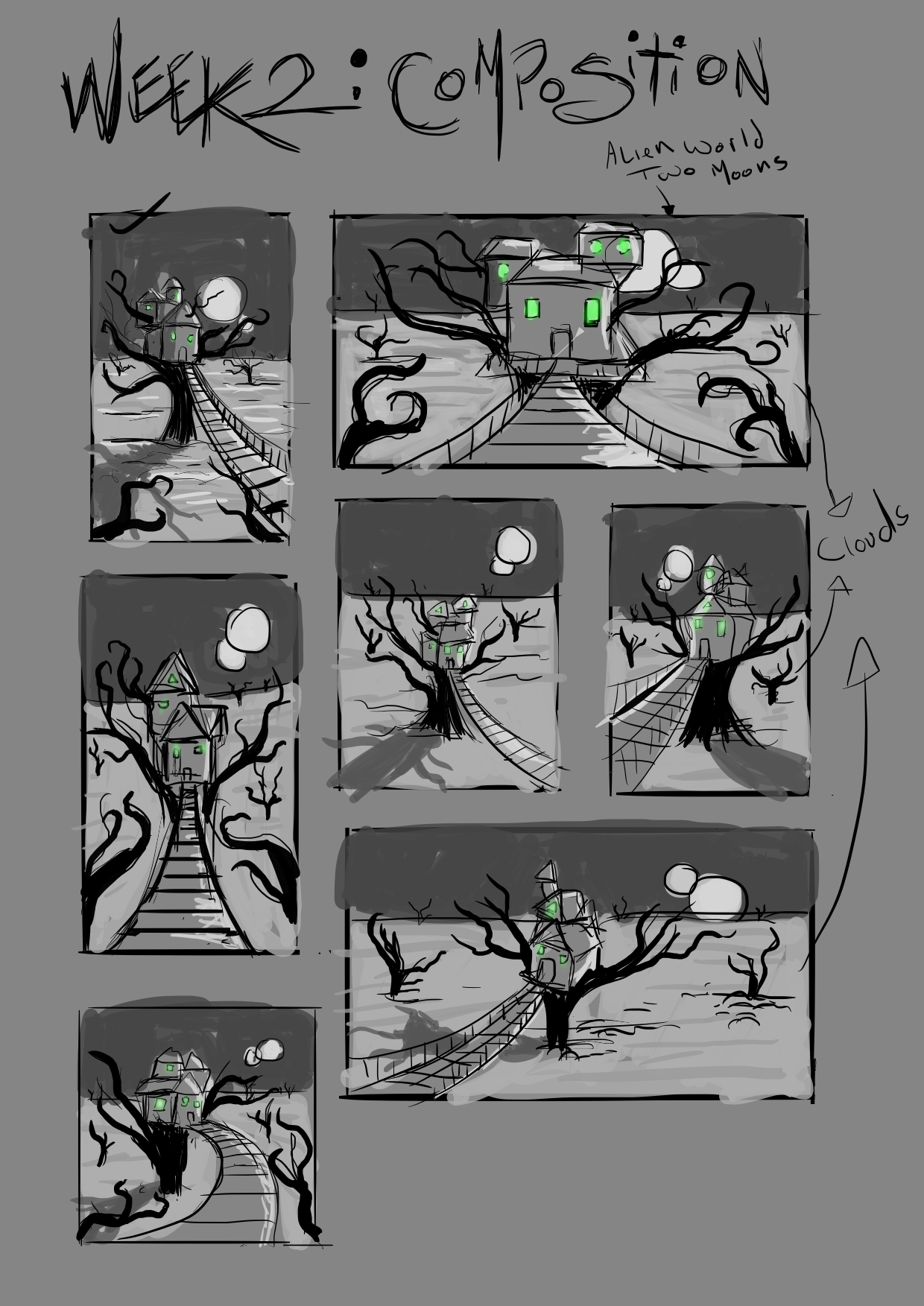 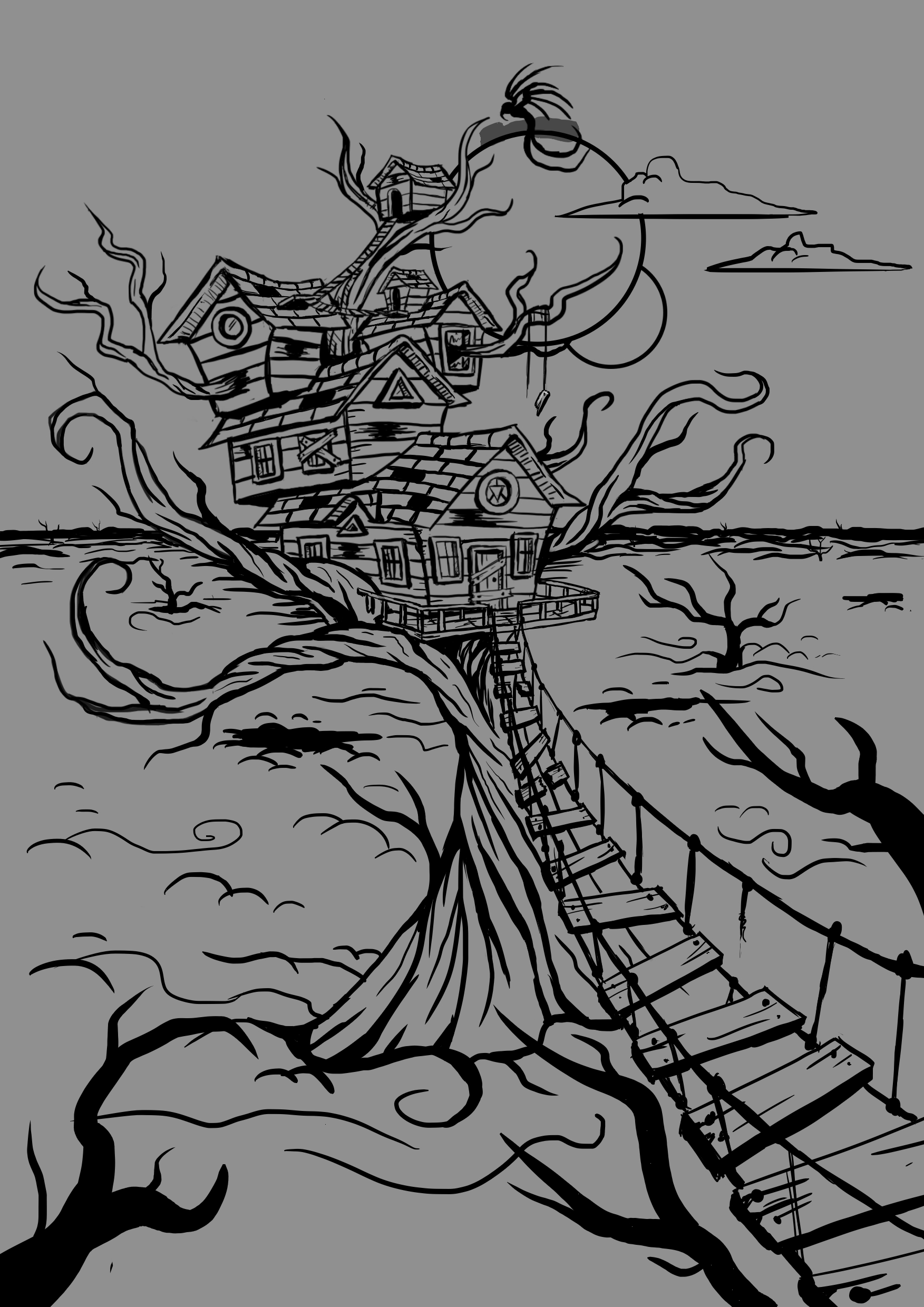 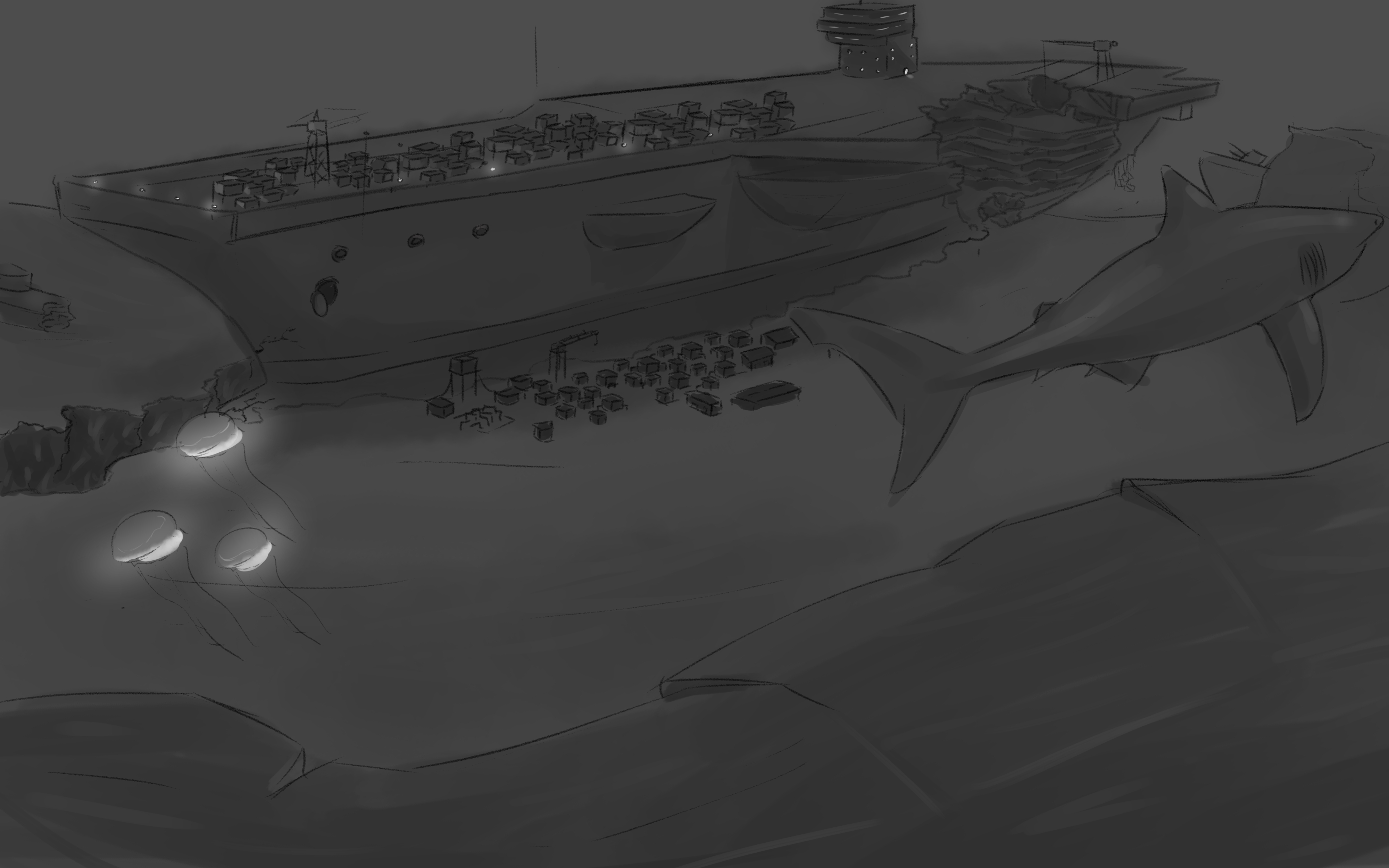 Week 2 - WIP.jpg4000x2500 1.2 MB
For some reason, I get good ideas when I’m not actively doing art. In order to make the composition a bit better, I made the scenery a trench, rather than a empty ocean floor. I also wanted to add some sea life to sell the idea of an underwater scene a bit more.

@Dvici
Thanks for the input! I really appreciate how much time and effort you put in to provide feedback! I honestly don’t see you get thanked enough. Although, as for photo-bashing, I feel as though whenever I use a 3D model or compile a scene using references, the final product actually ends up worse than if I hadn’t. Maybe I’m just bad at it, but I feel that the scene becomes too stiff and lacks a lot of dynamism that I would’ve had if I did a loose sketch.

@stotka
Thanks, this helped me out immensely! Even though I’ve seen and even been on aircraft carriers, it’s really hard to wrap my head around how big they actually are. I really dig the slums look and I like the idea of there being some cranes for construction and transporting resources. Although, with these new concepts, I want the slums or more residential area to be aboard the ship, while there be a camp or working area at the base.

So here my thumbnail compositions, and one I chose to do full painting of. I appreciate your feedback 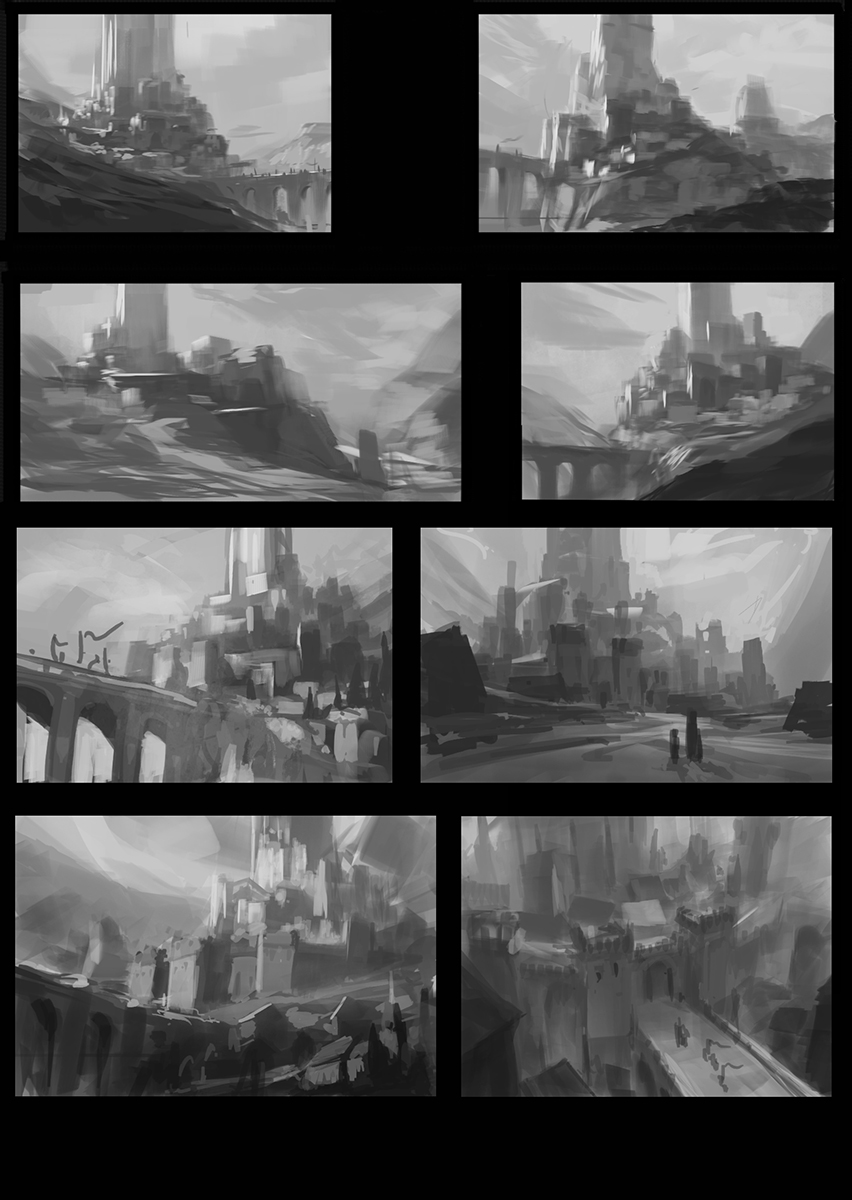 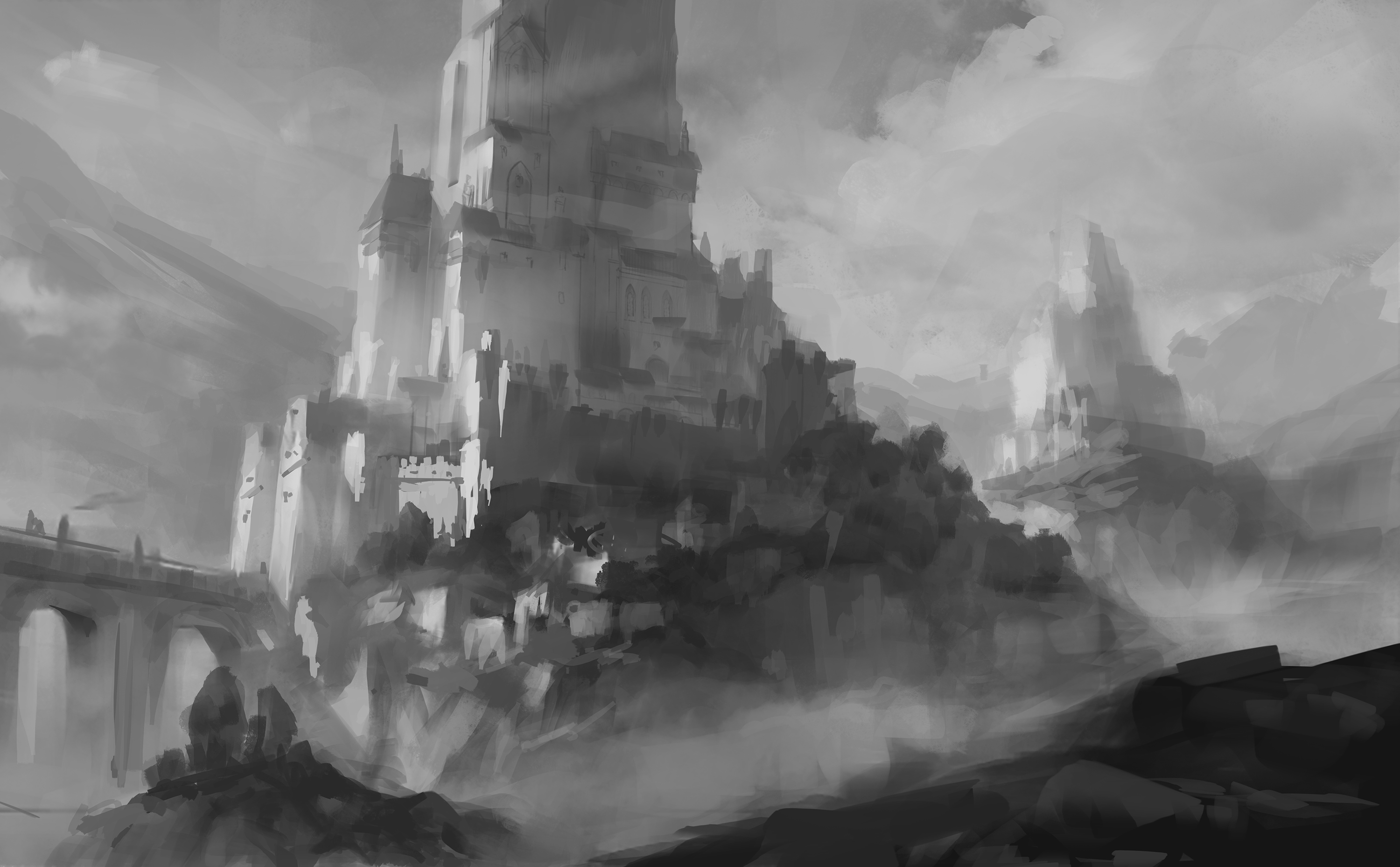 I kinda like to start with values those times

Why are you taking this course?

I couldn’t do this in a million years, spot on.

Agreed , thank you for the feedback.

Thanks :D. Well actually I take any environment design course I can with the intent to focus on design part. This is because 99% of time i am hired as an illustrator and I would love to do concept art work. I’m trying, not only to up my design and concept skills, but also find a way to communicate my designs quicker, because no art director is going to accept week long time for one picture.

Fantastic improvement by the way!!

I think the direction your going in is fantastic. For fun you should place a few bubbles in there near the front ;).

You are most correct that 3d really us helpful it solves alot of perspective and initial constructive lines issues.

The one thing you get from photbadhing is a combobulation of textures and details. Somethung that is harder to achieve in raw 3d.

I’m glad my advice us helping… i truly can’t wait to see where you take this.

so here are my sketches and line. C&C are welcome. 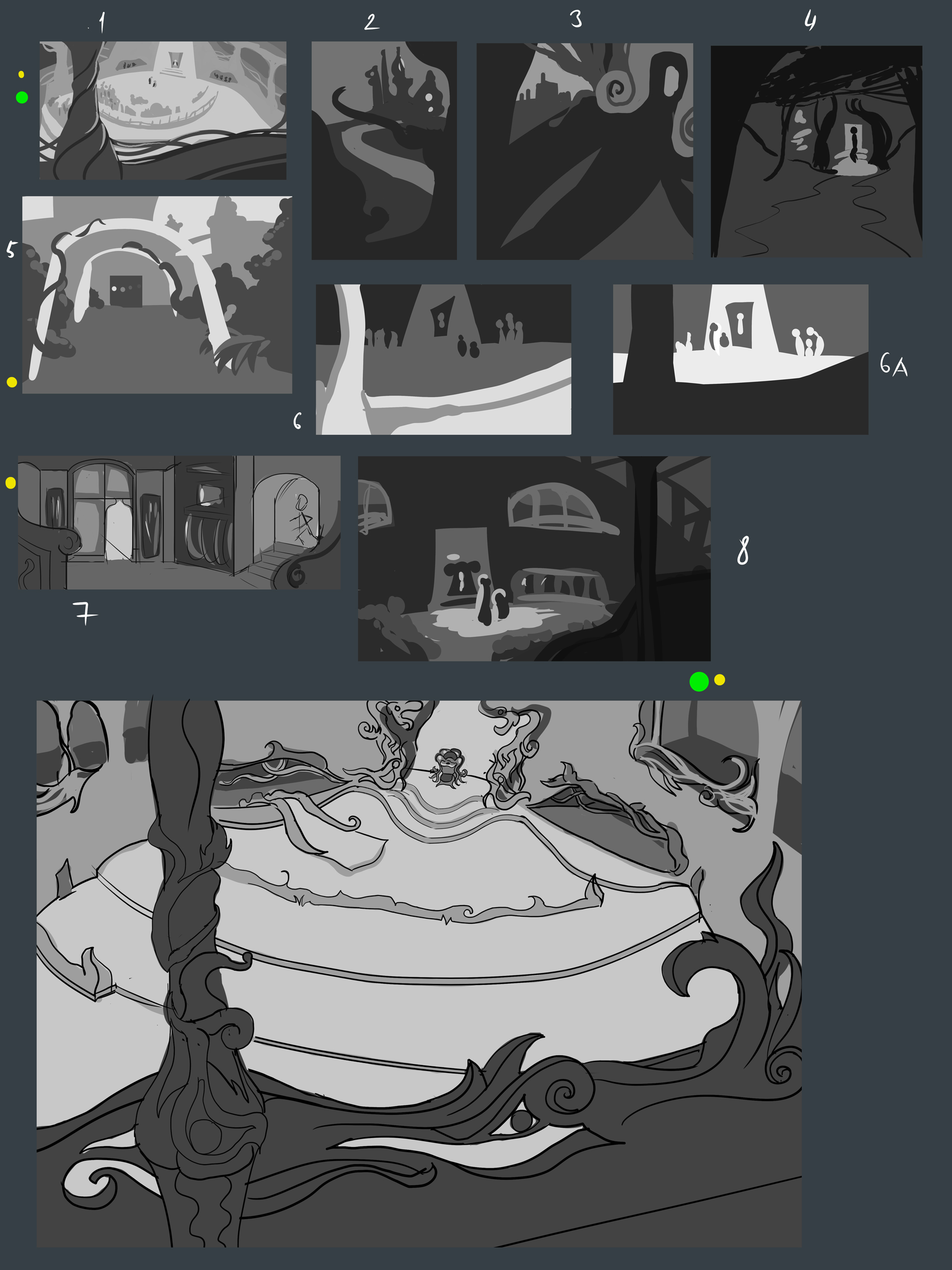 These are looking really nice. I really like the value control you have.
Considering your point of interest, it may work really well to try 1-2 vertical compositions as well, for those tall buildings

Also which brush are you using?

Guys, anyone have any brush recommendations? I’ve had a hard time finding a nice brush to sketch with, which kind of made it hard to concentrate.

I personally like the real 2B pencil in the pens and pencils section for sketching. For basic blocking in values I use the flat color 2 brush in the simple section. The sargent brushes are quite interesting as well. I think you may be able to find some custom brushes online as well. Hope that helps

Great work… I love seeing it ! As it is an inspiration to set a goal towards…

Keep up the good work… 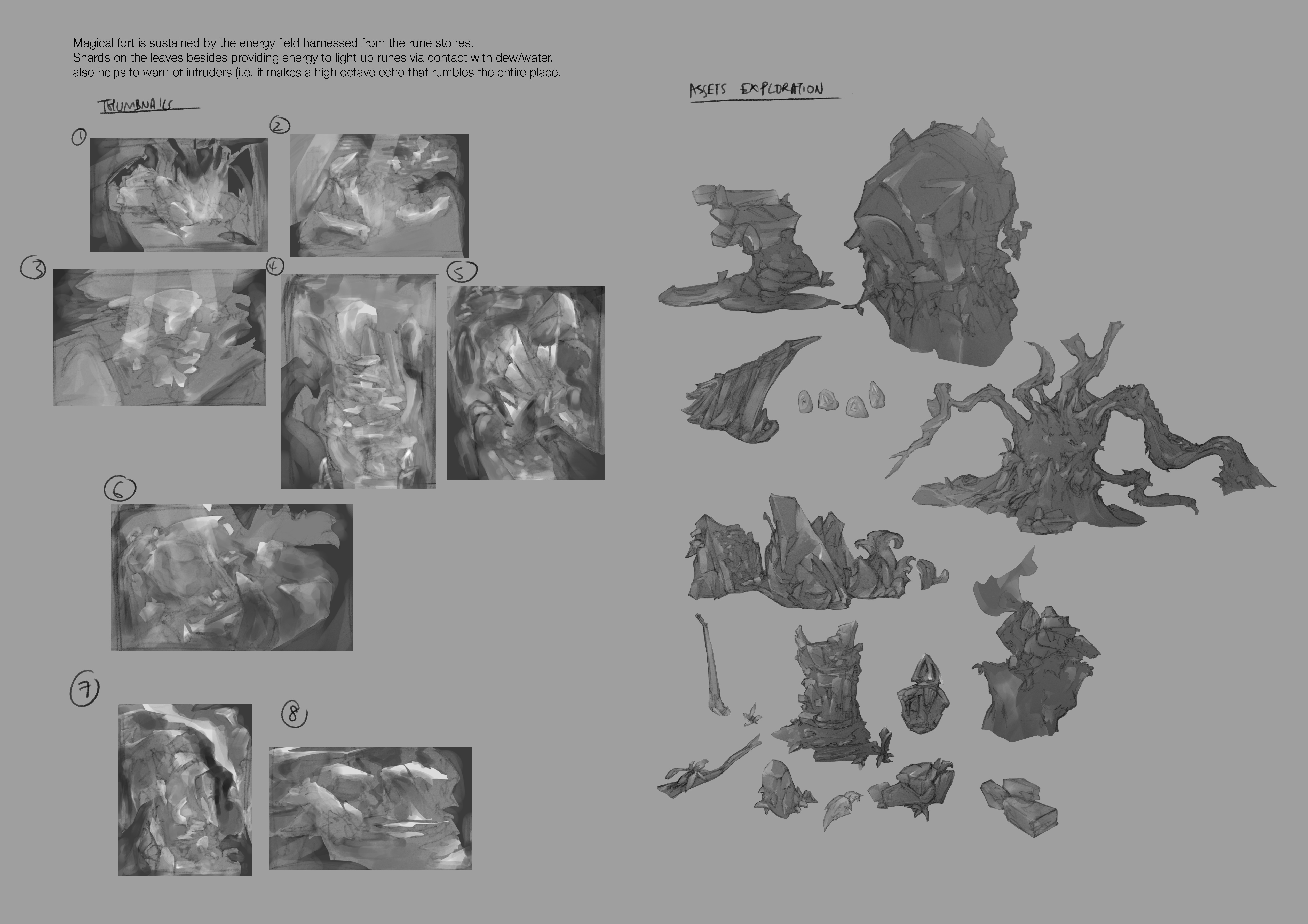 Here are my thumbnail designs for this week. Redid some of the story elements from week 1. 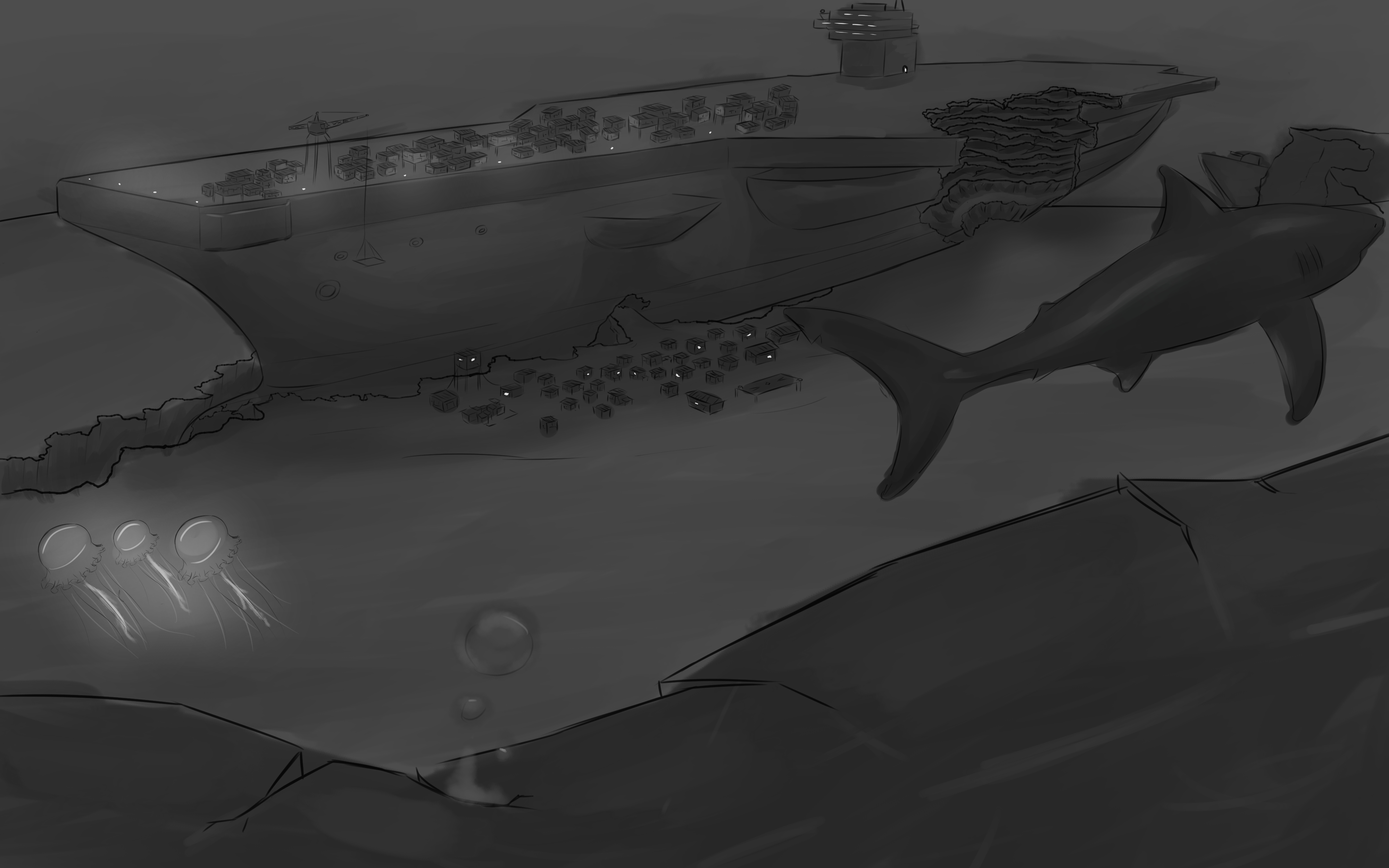 I think this might be the final version, or at the very least, I’m not sure what I can change or add at this stage. I feel like a lot of the detailing work I wanna do has to do with colors (moss, rust, paint textures).
I’m sure when I look at it later, I’m gonna find a whole bunch a stuff I wanna add/change.

This looks great! The huge shark in the foreground and tiny buildings in the back really emphasizes the scale and makes it interesting. I want to know more about this place and what’s going on down there!