Been a super busy week, so I almost forgot to actually post my thumbnails. I have a bit free time today, so hopefully I can post a roughed out final.

I learned a lot, particularly since this has been my first actual design course. I did have to look up a lot of references to get the angles correct.
I am leaning towards 2, but I’m going to use the lighting from 9. Which will be interesting since I’ve always wanted to use the Northern Lights for a piece, but haven’t actually done it.
I’m also going to be fleshing out an actual building in the final for 2 so it’s not just a rectangle. 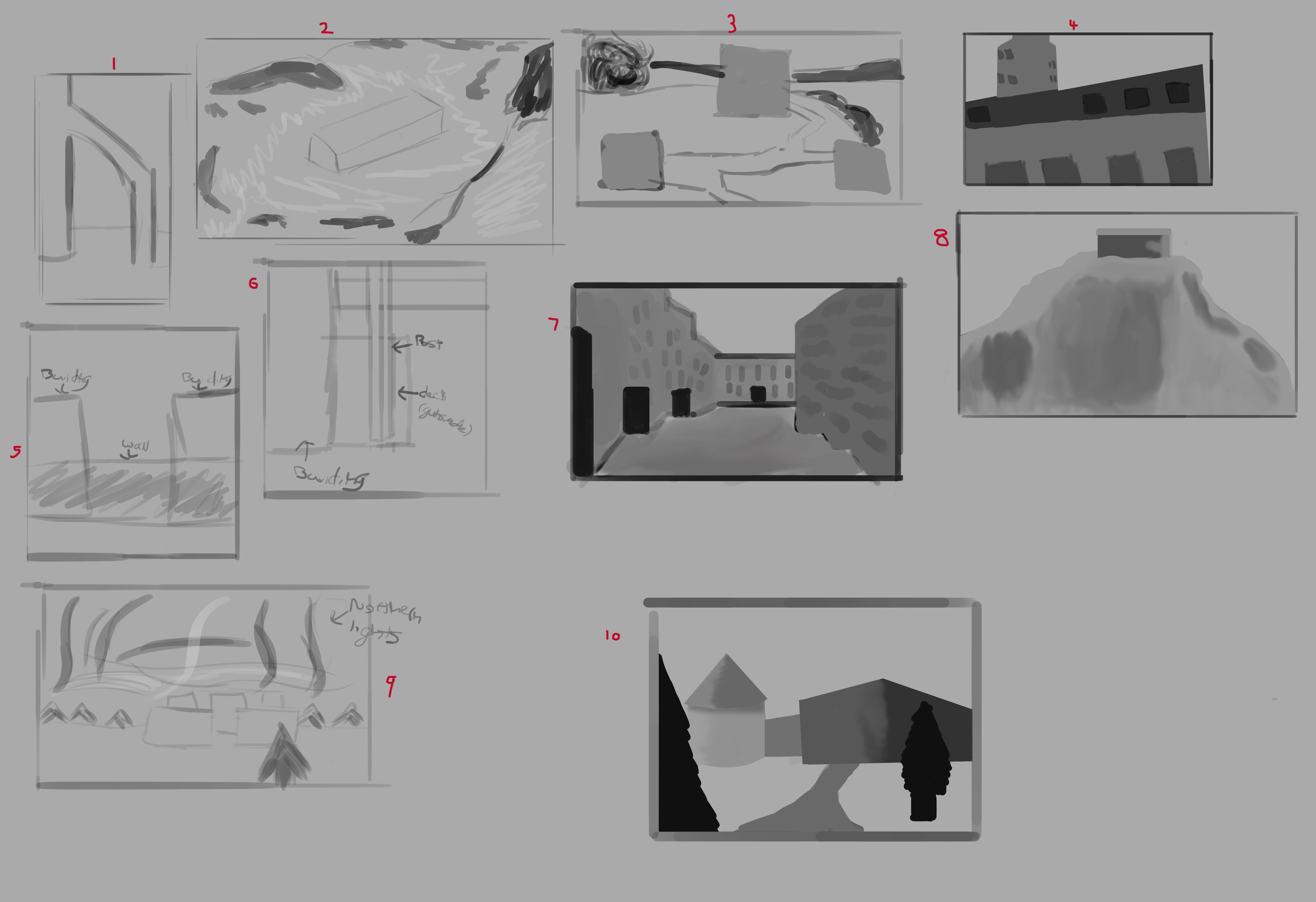 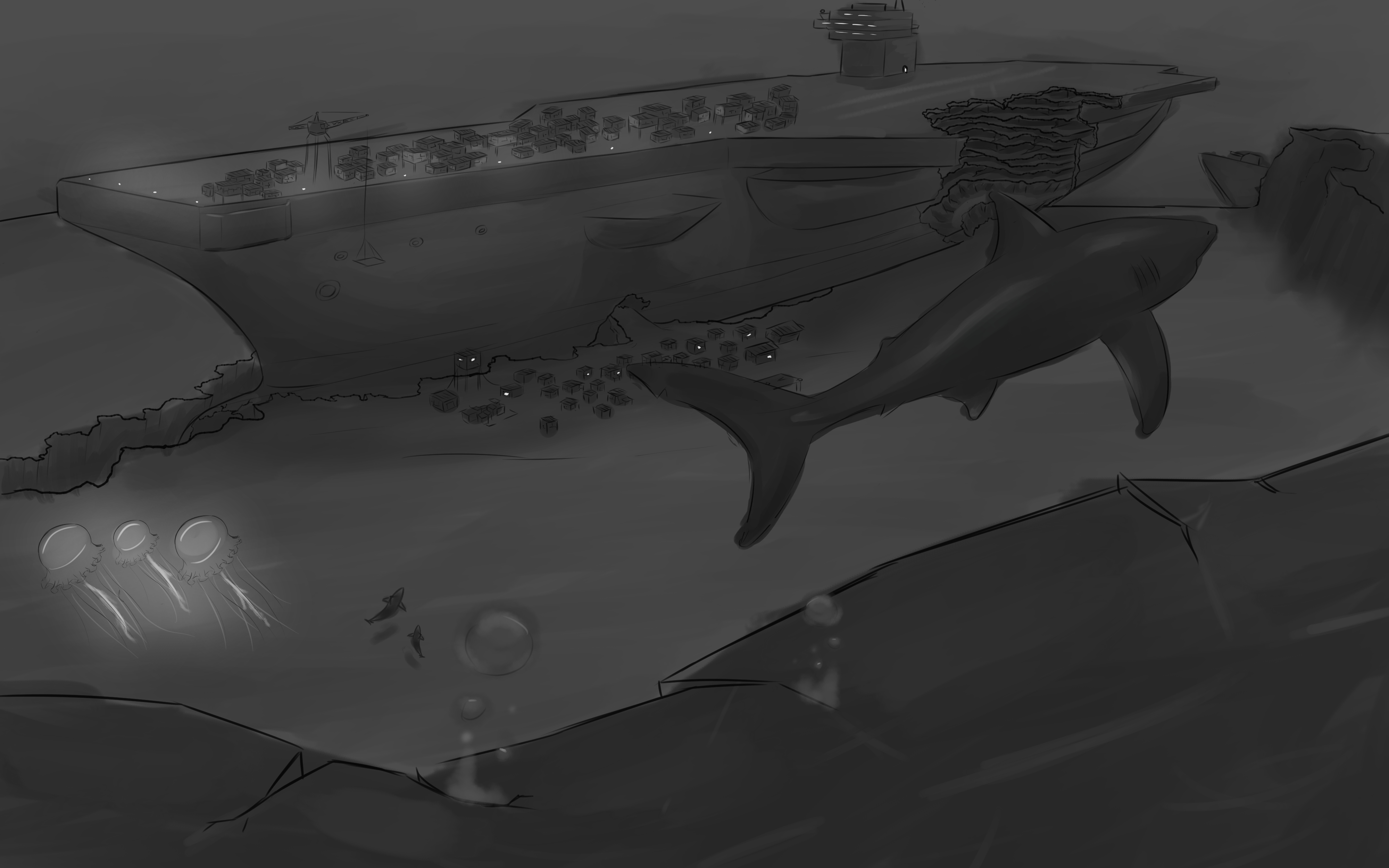 Tried to work a bit more on the ideas I had.
For this week I tried to work on different camera angles. 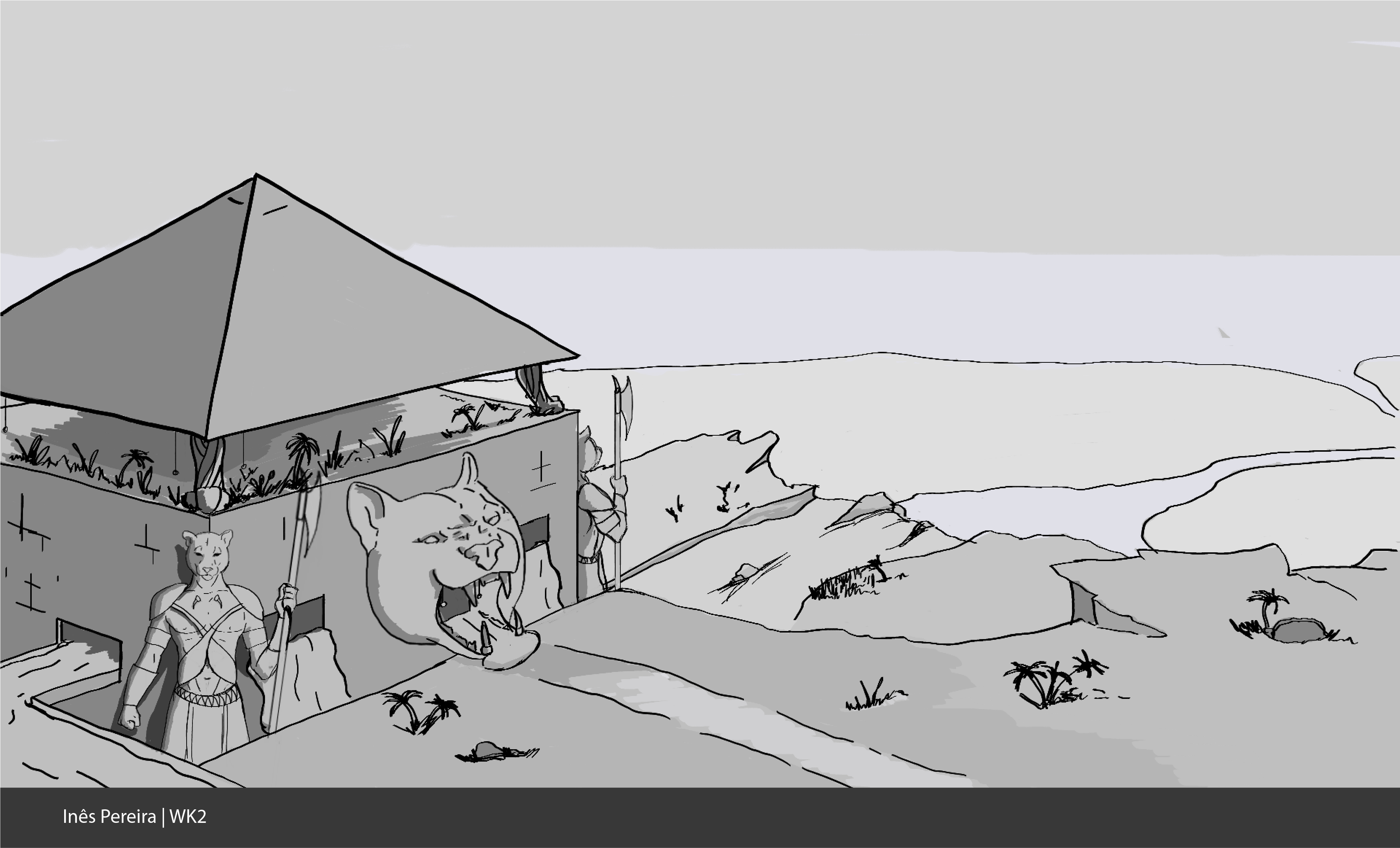 I’m not sure if I was able to convey the correct sense of scale and depth of field. 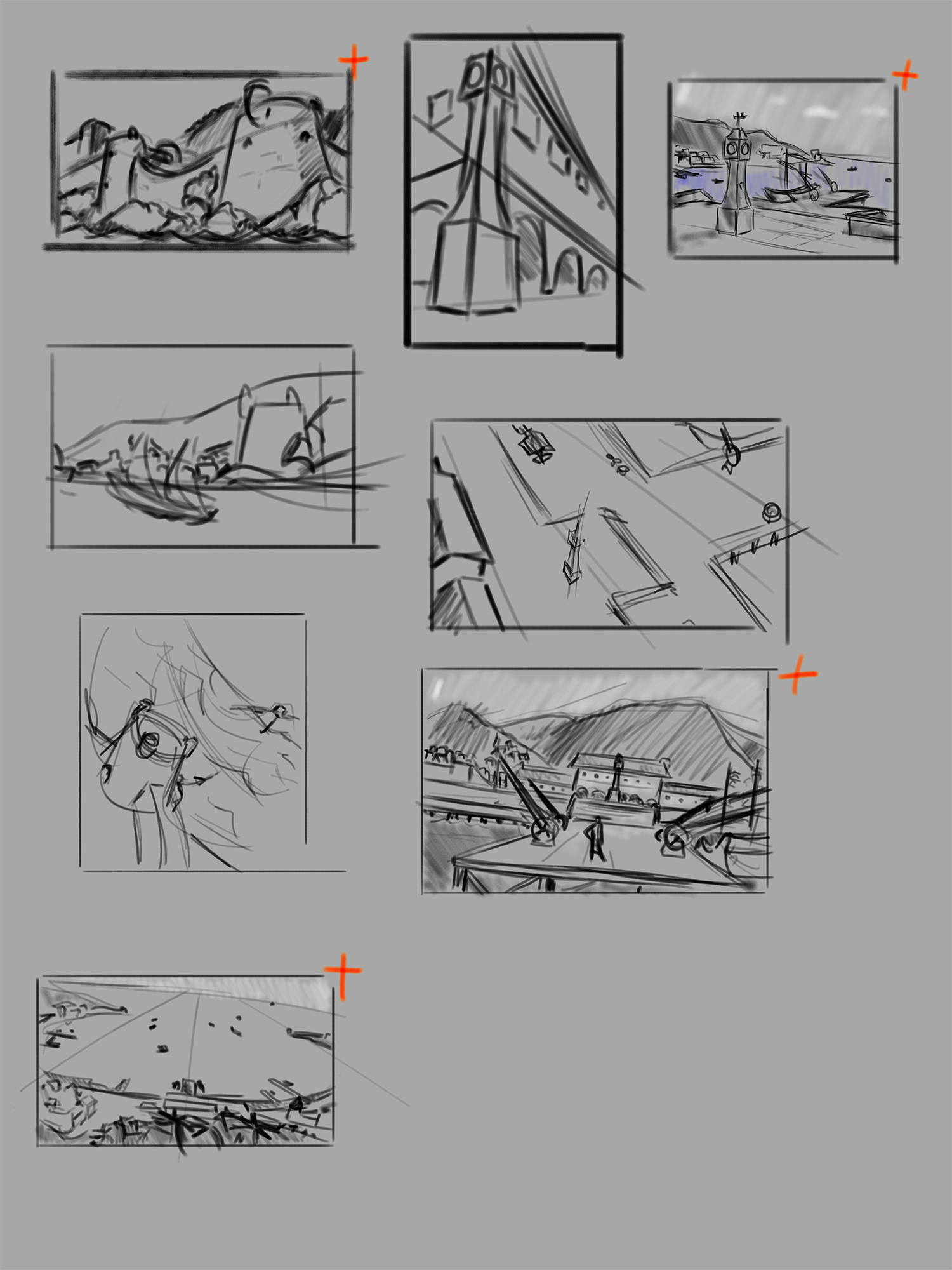 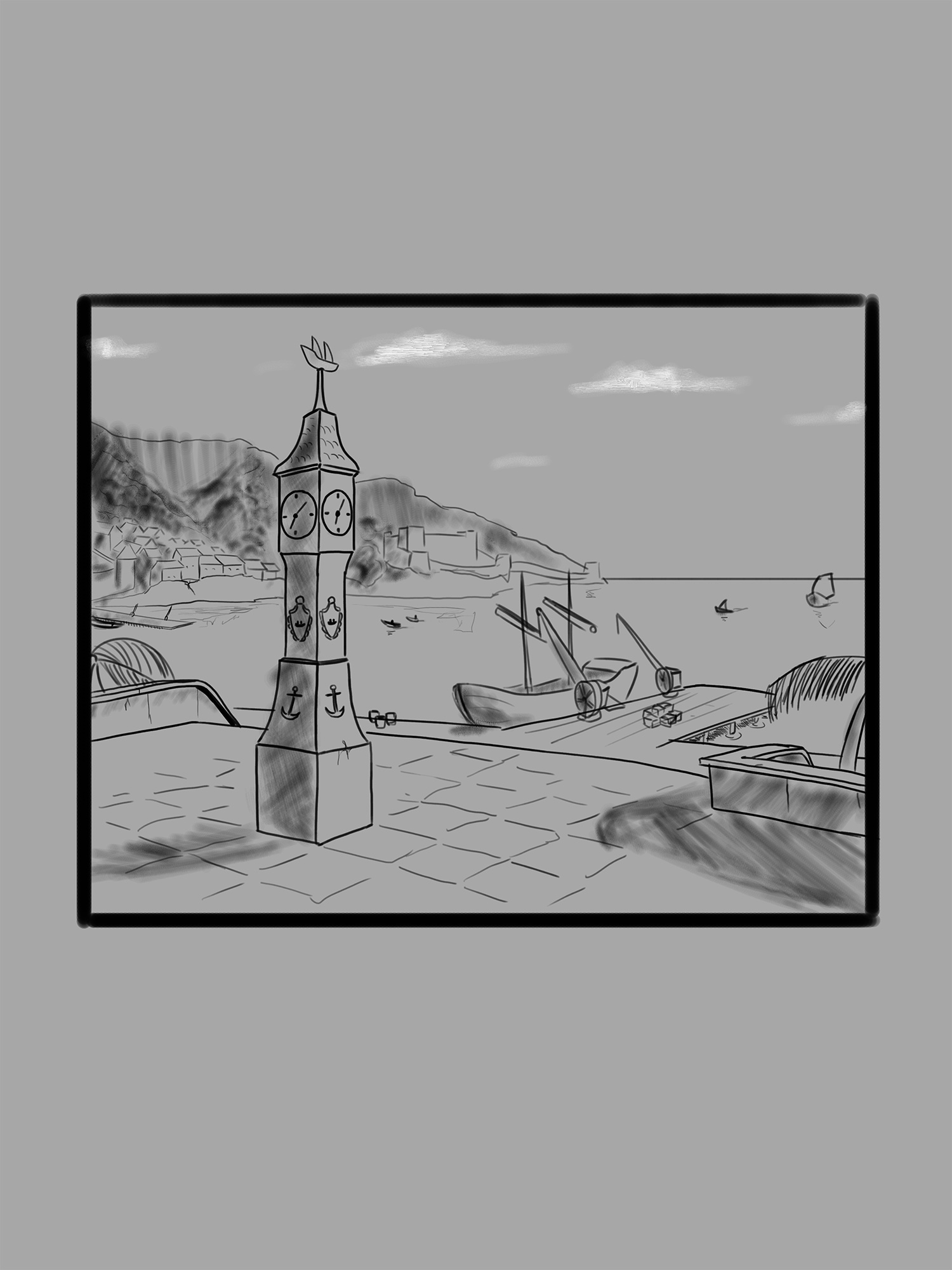 I chose the clock and the harbour as I liked the composition - it reminds me of an old style painting.
I am still trying to orient myself with Painter, so I was not able to make everything to my liking, but it is a work in progress.

I feel that adding colour to the sea and sky would really bring this image to life.

Here are some thumbnails I did.

Really not sure which one I want to pursue just yet so I haven’t done too much detail on them. Would love some feedback or suggest which one seems to be the most interesting! XD 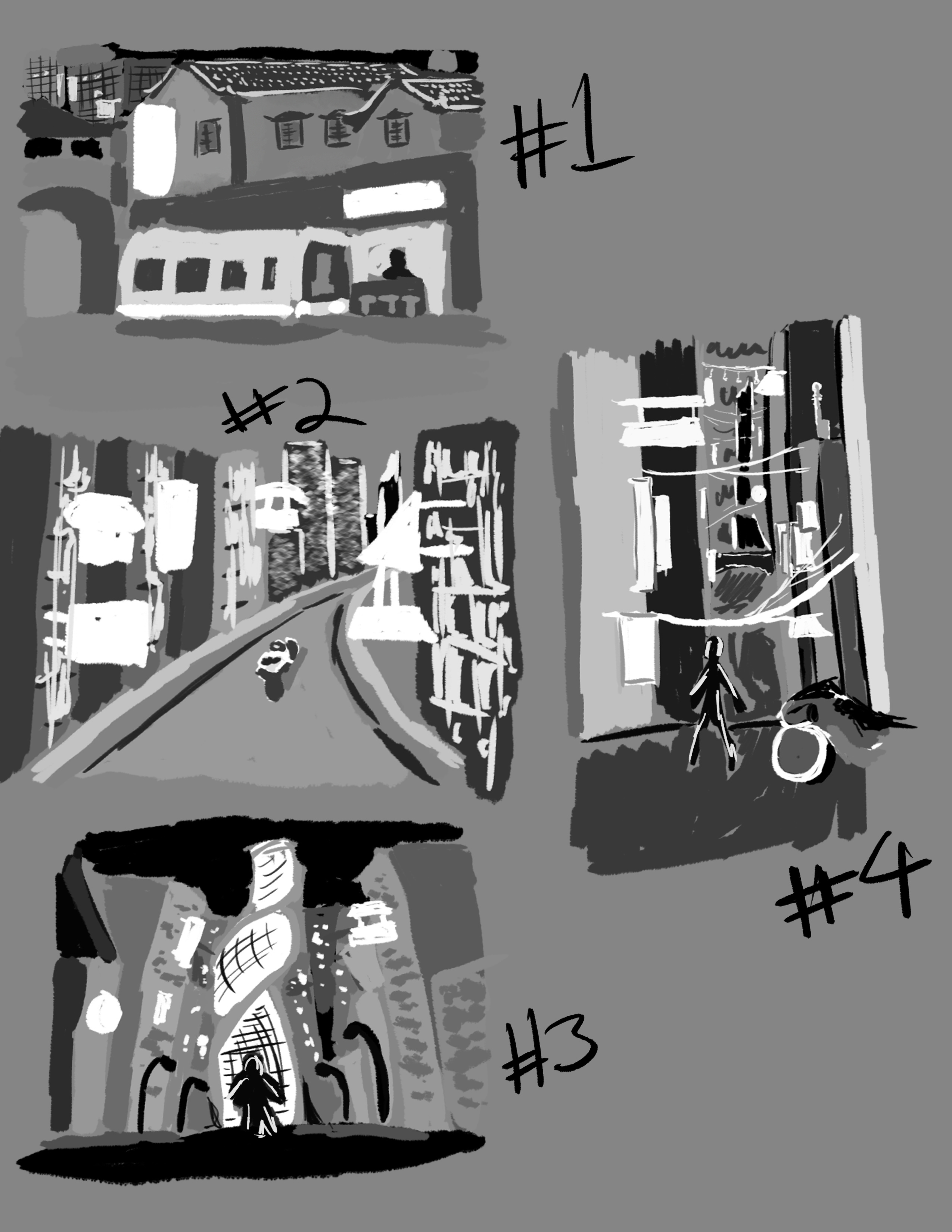 Made 3 thumbnails trying to understand the angle and mostly what details, objects should be included in the image.
Then hadded details to the choosen thumbnails but still needs more work… lets see how it will go next week

Please tell me what you think! Thanks 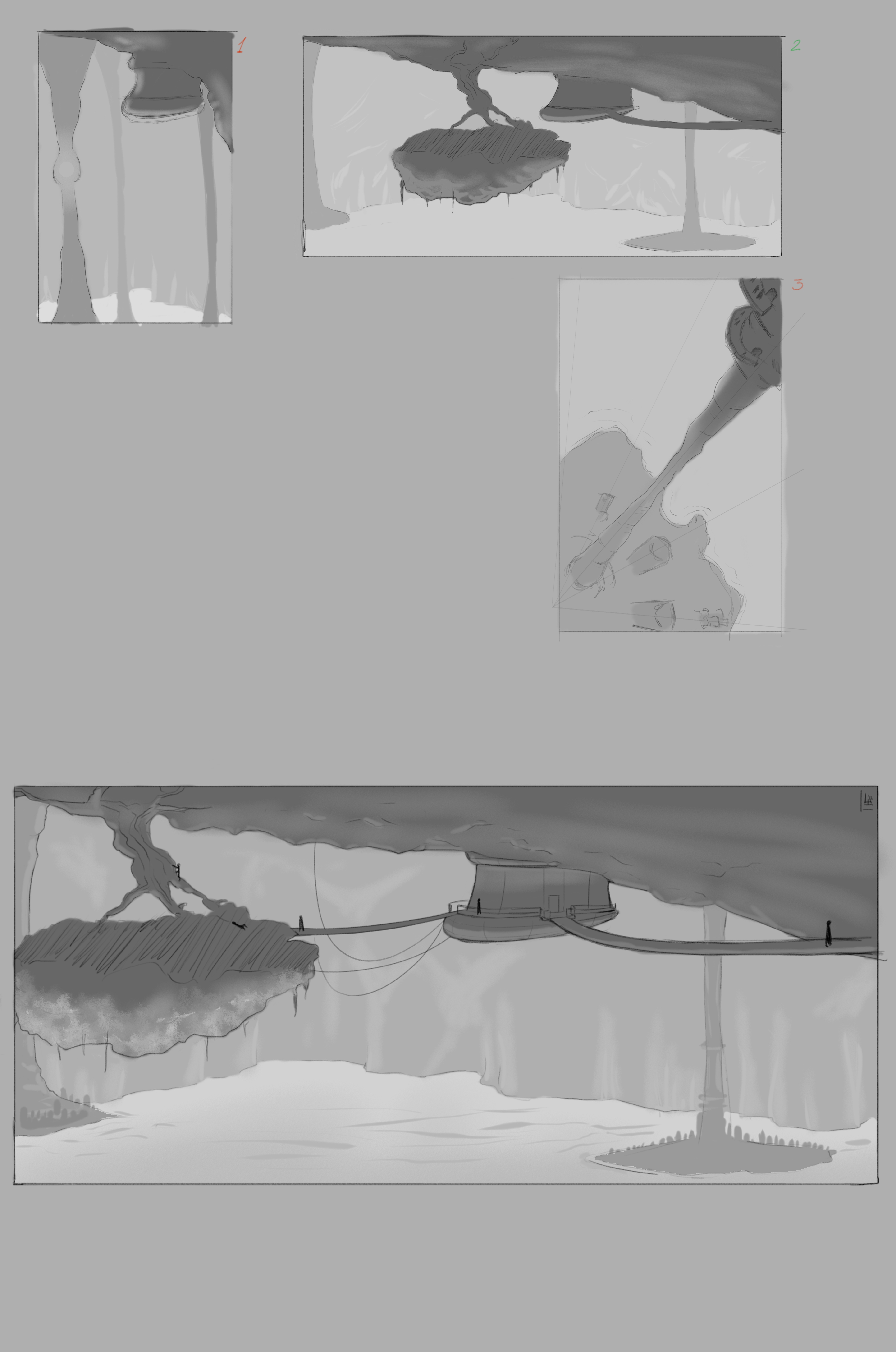 I’m posting the thumbnails for now. Initially, I wanted to make an interior (either a temple or a cave), but something just didn’t feel right about the thumbnails I was doing. So I changed my idea to an exterior location last night as I was at my wits end (that’s how the disaster no. 5 thumbnail was created). Had a good night’s rest and finally made the last sketch, which is pretty ok and I’m most likely going to continue with that one.

Happy as I am now that I finally have something to show for week 2 and I love the abstract light/dark pattern in no 6, I think an interior is better suited for the mystical feeling I want to show in my final illustration…Another advantage of no. 6 location is that it seems easier to render to a final illustration, because exteriors have that simple and clear separation between foreground, middle ground, and background in increasing values (an interior seems way more challenging, balancing the the three grounds and the artificial lighting that would mess with this clear distinction (at least for the thing I have in mind).

This is the first time ever I’m making an environment, so some comments would be much appreciated

And I hope it’s still ok if I post the final greyscale rendering after the webinar, don’t know if I’ll manage to take it to completion in the time left 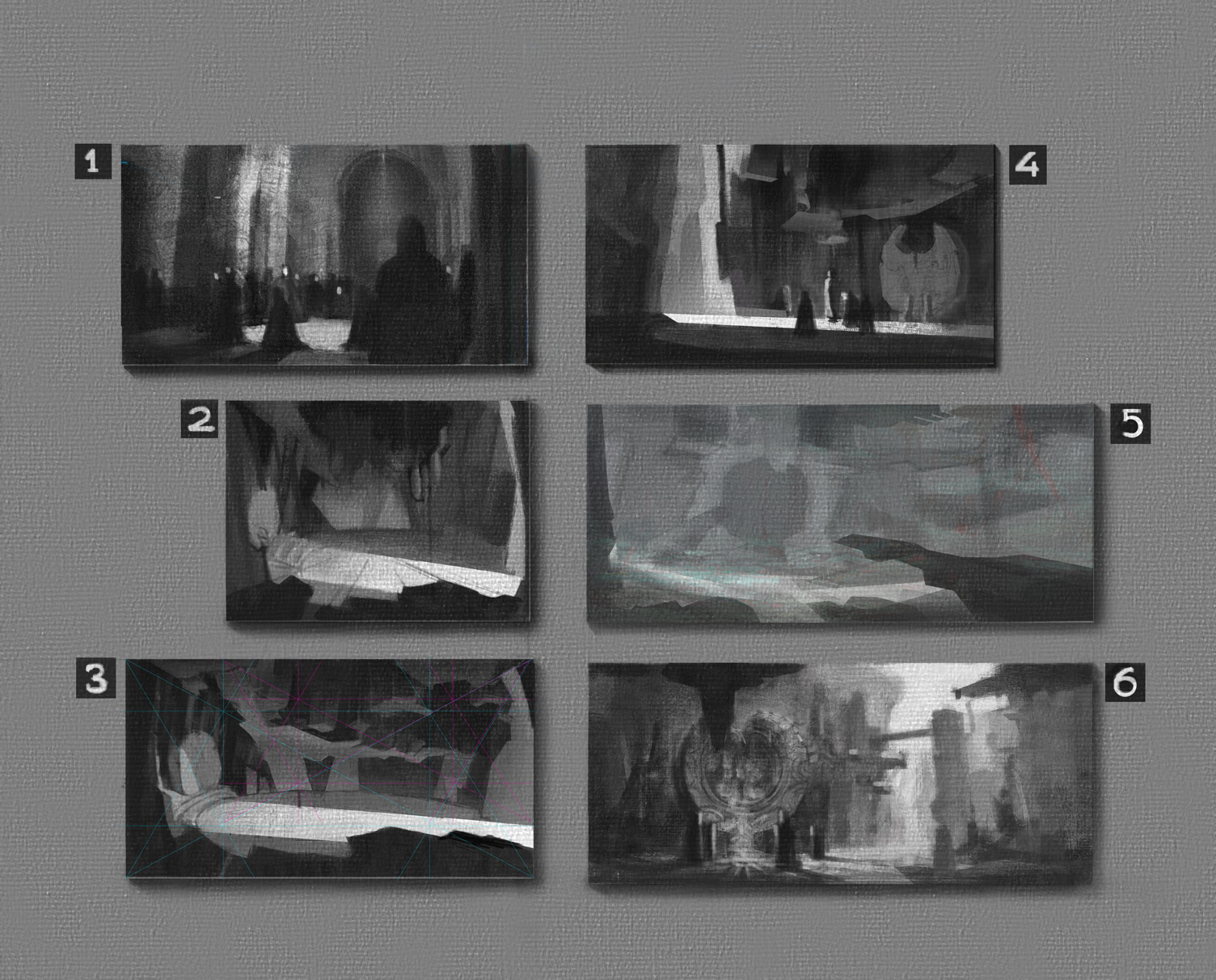 Some more iterations that I made to bring about the balance between composition, flow and storytelling using elements and ideas from previous comps. Really interested in how the traveller’s story would turn out visually. 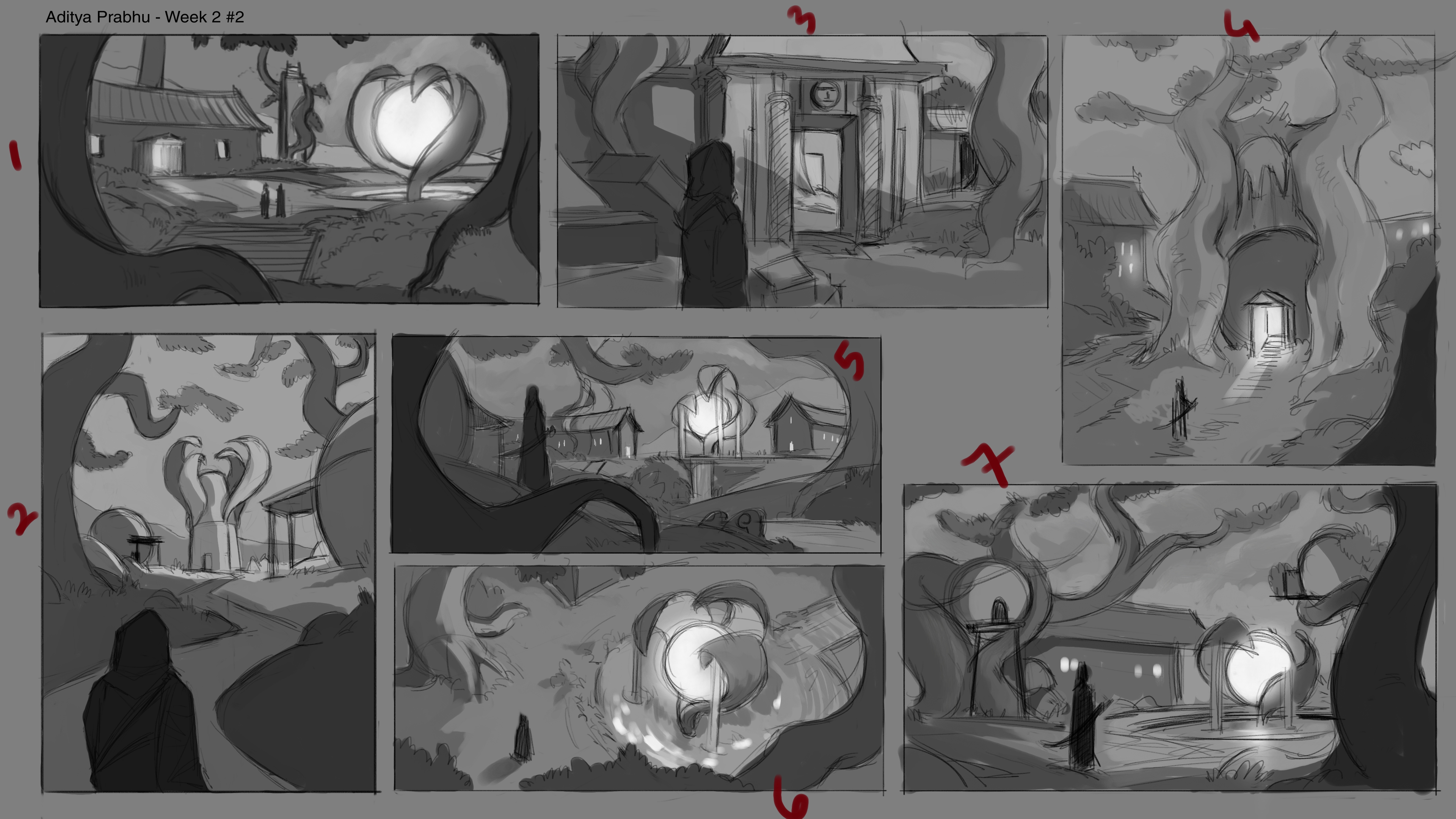 I am sharing as well my thumbs composition for my piece. I ended up choosing the totem story. I mostly focused on composition and blocking out the basic values to give me a better understanding how it can work out in the end. 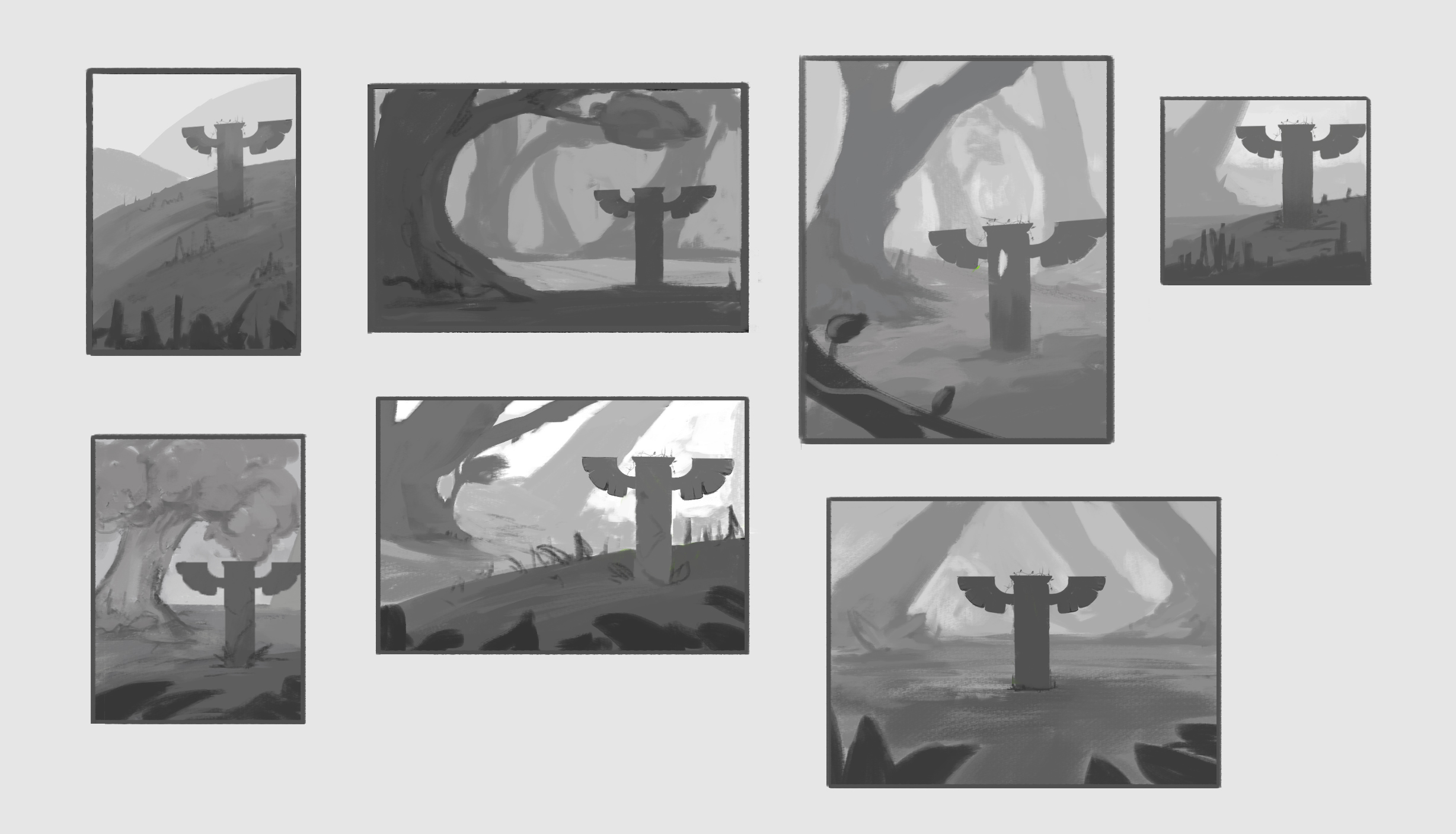 I like the composition of No5. It has a lot of depth. How do you approach dealing with camera angle such as No 6 btw? That bird eye view always giving me a hard time 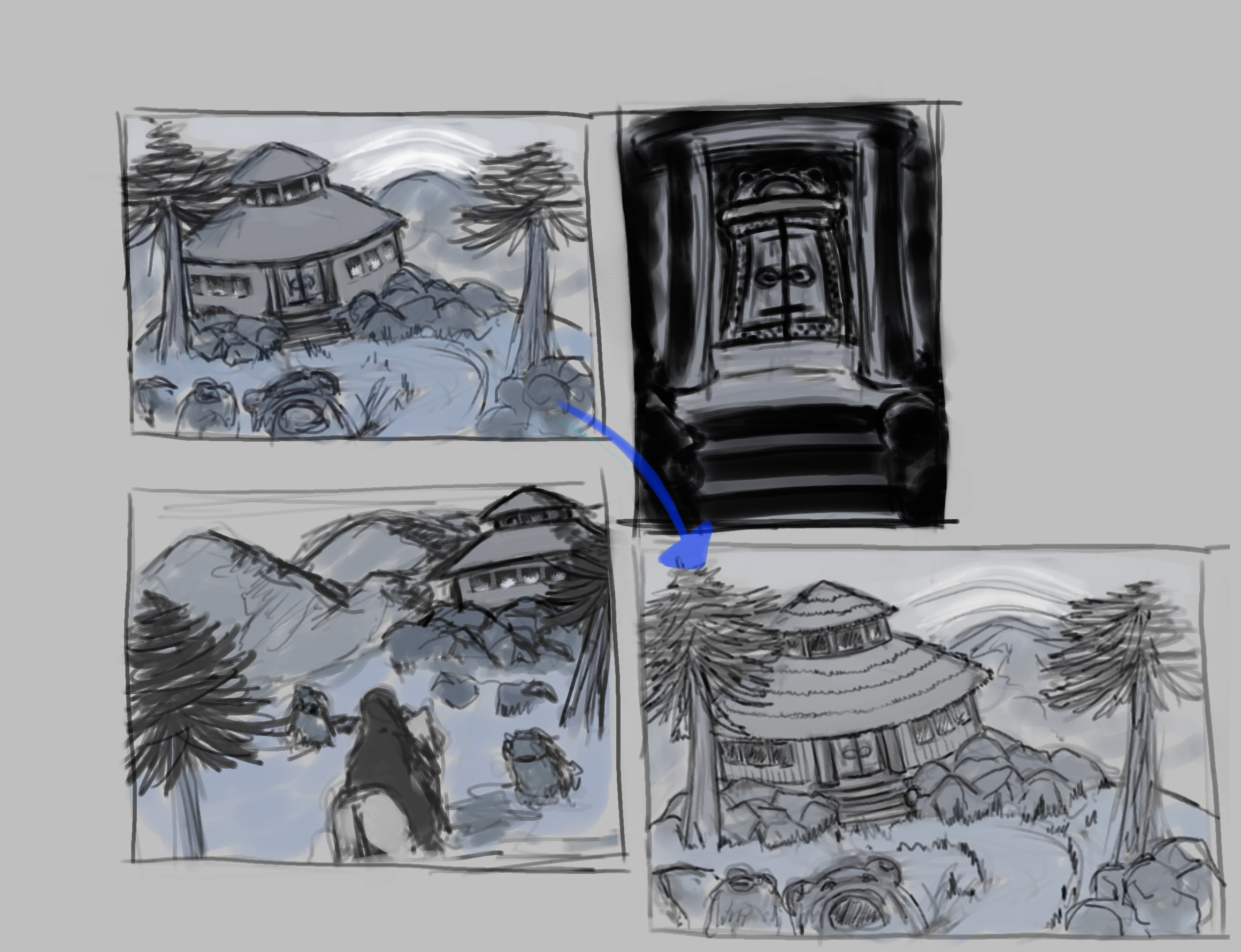 Hi! I’ll hope is not to late to upload my homework. I was thinking to do a mountain environment, with a couple araucarias, and a kind of ancient native house

I saw greats sketches, you people are inspiration for me.

The “airflow” is so beautiful!

Loved your thumbnails and i agree, no.6 feels to have a better composition and with alot of elements and details. Also you go from dark grey to very light grey smoothly what gives an the idea of big depth.

Hey guys! Here I post the thumbnails I created for week 2. My first idea was to create an evil atmosphere, kind of an interior with a devil spirit inside, as in the 1 and 2 thumbnails. But exploding that idea made me imagine an exterior with a creepy rocks and lava and putting on the focal point the entrance of the devil fortress. 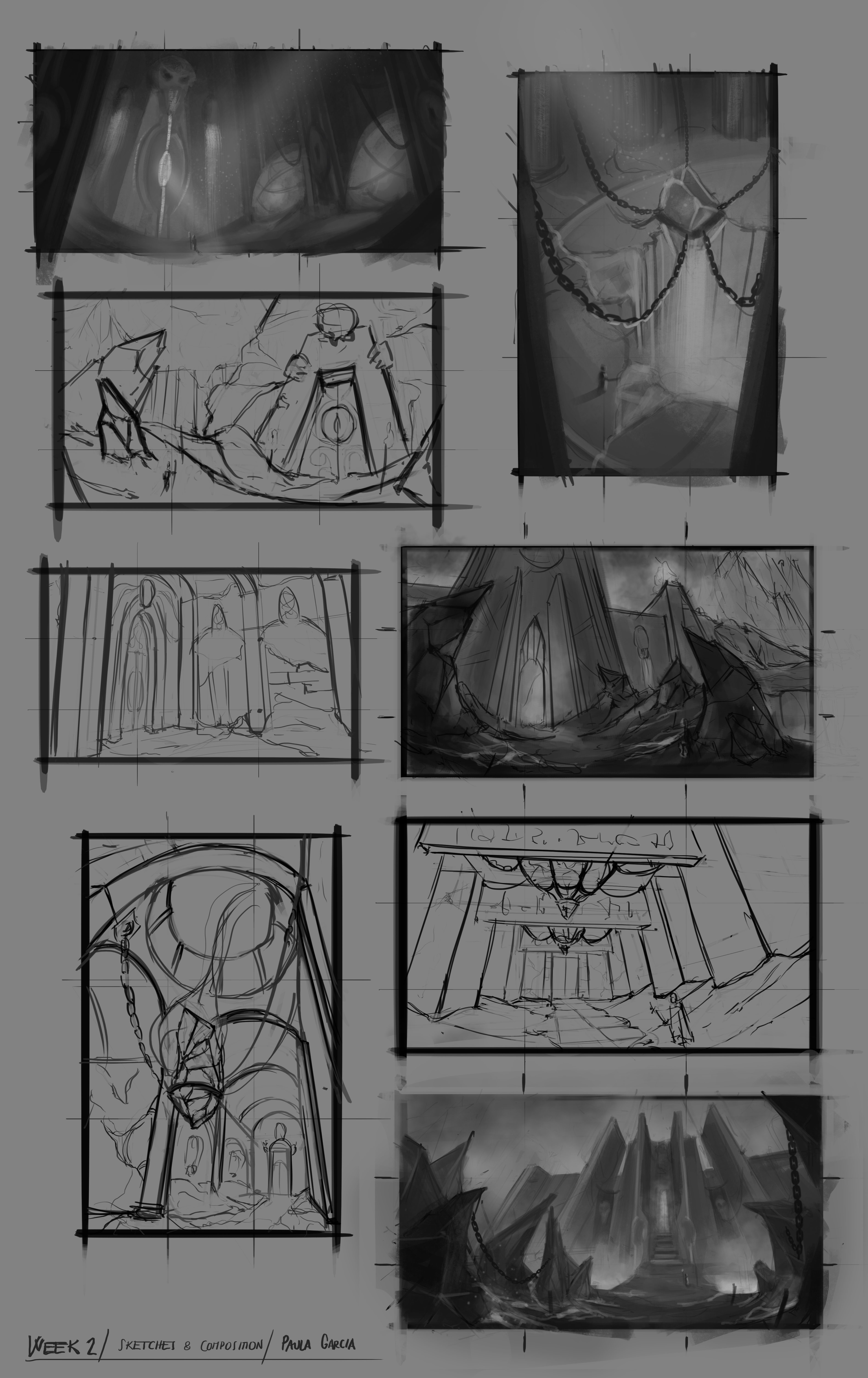 So I chose the last thumbnail to go further these coming weeks. 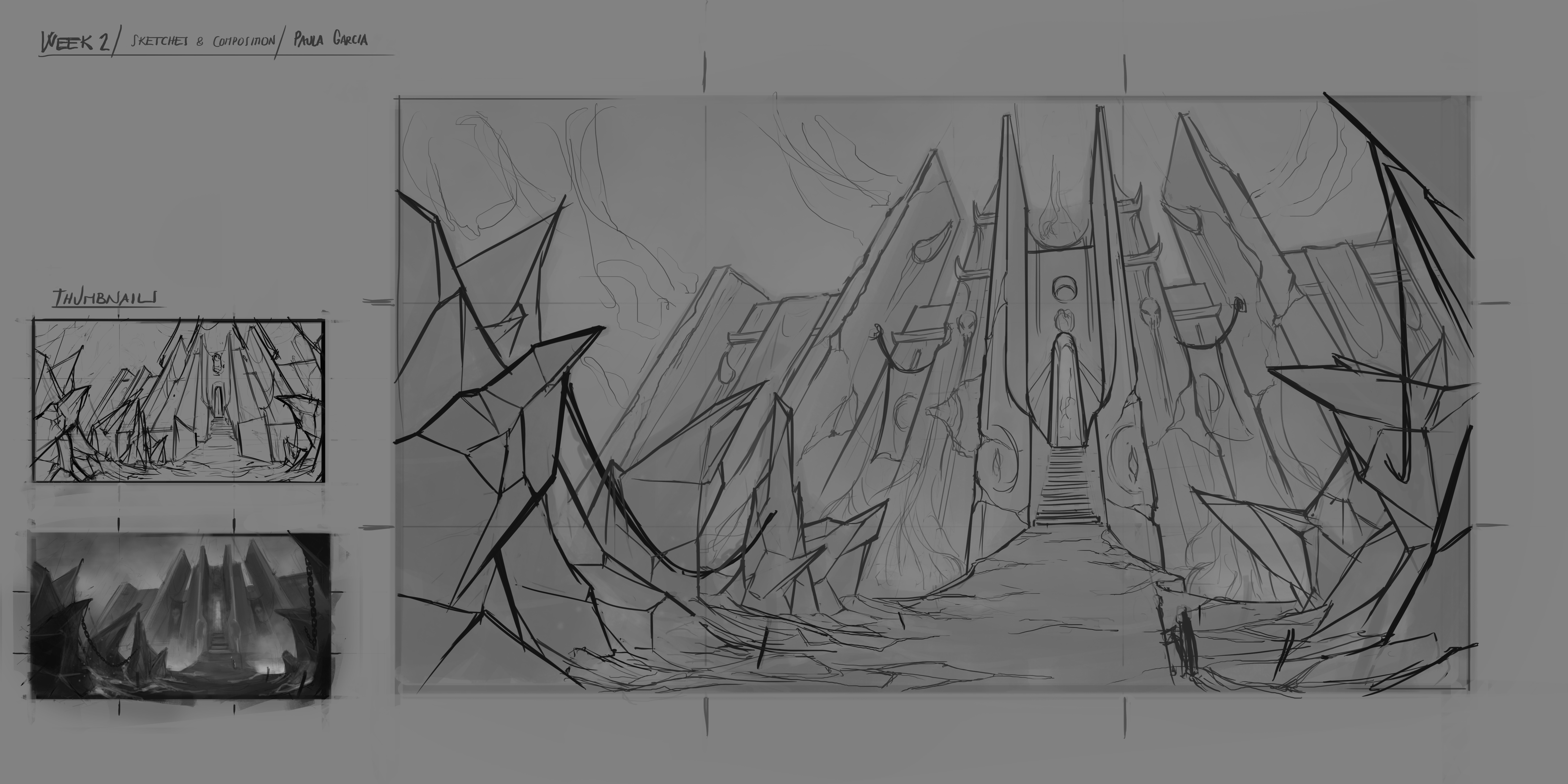 Winson Wen, Week 2
So my drawing skills haven’t improved much but hopefully my thumbnails are at least somewhat intelligible. I’m going for a ceremony scene with spirits on either side viewing (that’s what the bloby things are).
1 is supposed to be a side view, 3 a front view, and 4 and 5 from behind. 2 was an attempt at the camera being behind the staff but in front of the person, I don’t think it went very successfully though. Currently I’m leaning towards 1 or 4, but I’ll probably need to think of stuff to add to the foreground/background since it still feels empty. 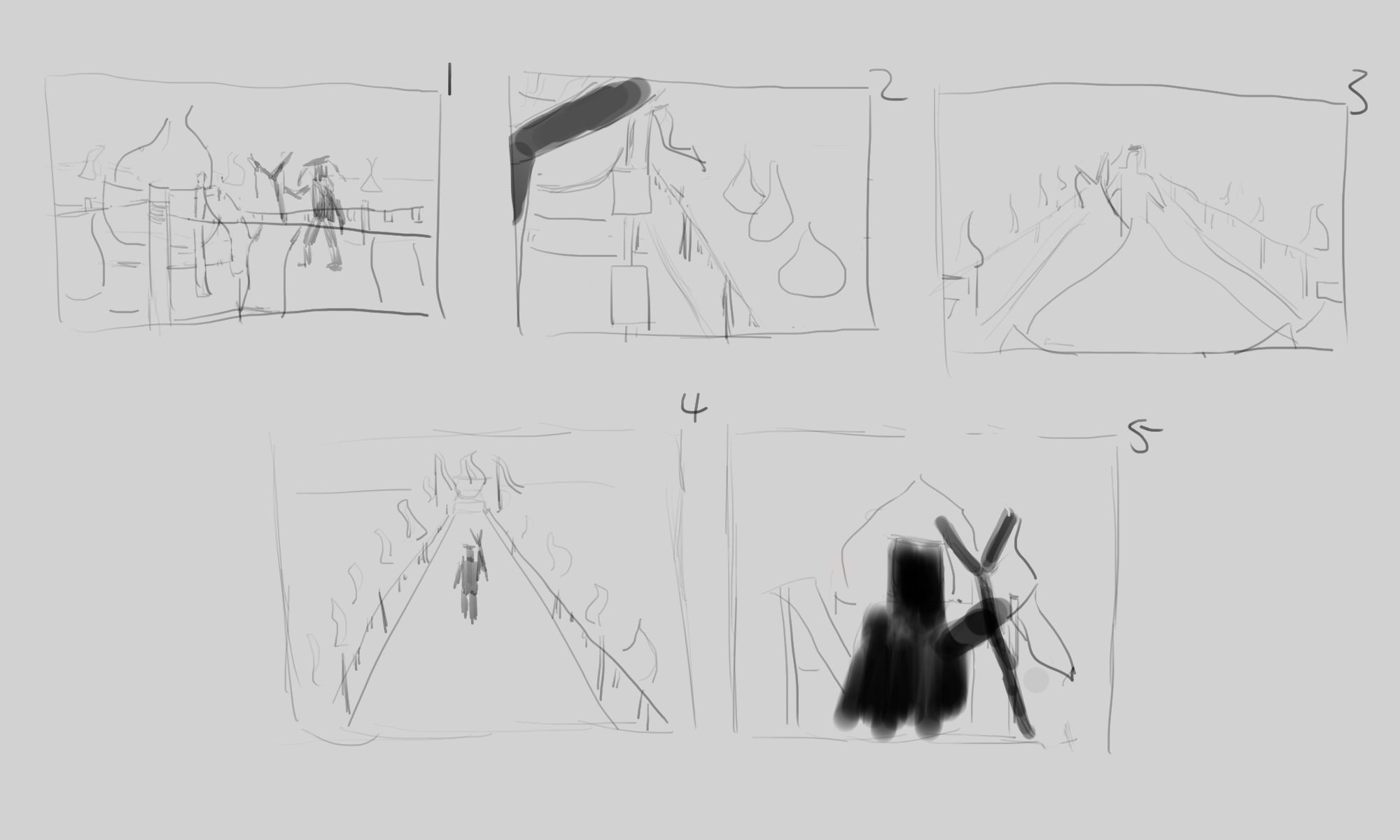 This is really cool, I love the ominous feeling I get with this! Reminds me of Diablo reaper of souls, really cool atmosphere, you hit the nail on the head with the emotion and tone in my opinion

Hey all, how’s it going? Hope you are having an amazing week!

So, following the concept of the brazilian native culture with a fantasy twist back from week 1, I’ve come up with those 5 thumbnails after giving some thought of what kind of story I’d like to tell.
So I’ve selected those 5 that bring different kind of moods to work on.

1 - 2 people in a balcony, talking or singing as the fisherman come back to the tribe in the river that goes in between the roots of the tree that supports the city.

2 - would be the same story, from a different point of view in which would focus more on the story of the fishermen, with the ceremonial shrines in the foreground and a bunch of more architetonic work

3 - up in the city, high above the ground, two kids would be playing music unter the shades of the leaves, while alduts in the distance would do their chores, there’s a thirst child on the rope bridge that would join them. it’s a more cheerful scene that brings out the musicality and joy of the people that live there.

4- explorers reach the vertical city on the massive tree, i was intending for it to be more of a mysterious mood of discovery.

5- A mother and her child visit the alter with the cerimonial urns of their ancestors, they climb the stairs made out of wood and stone, with carvings of their gods in celebration of the cycle of life. down the stairs, there are a nother set of stairs that lead to another balcony with a sleeping net, where more people are about their lives. In the background you can see another balcony from another tree, clouds and birds to indicate how high they are. 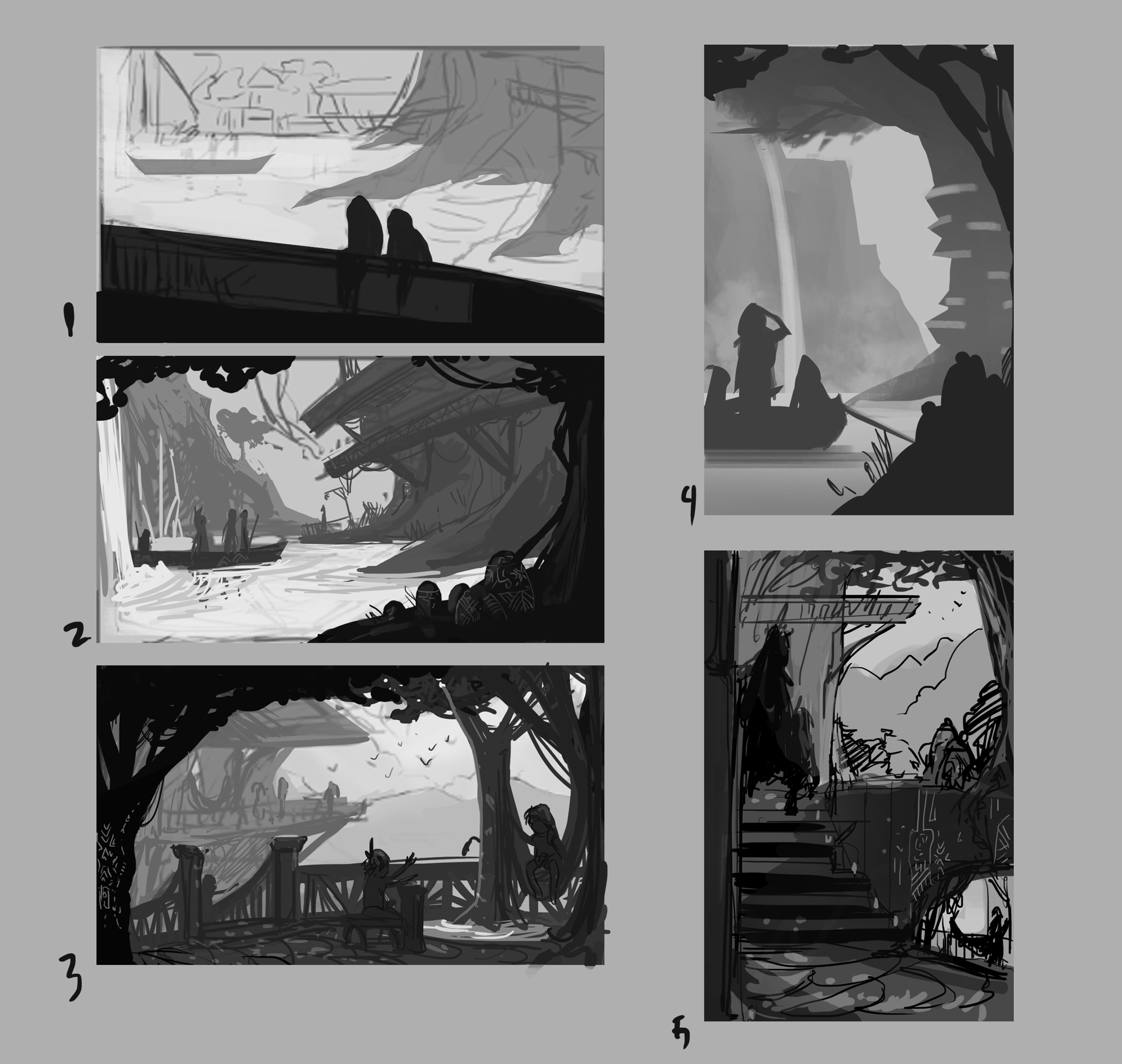 I hope I made myself understood despite my English, thanks all for reading 'til here. 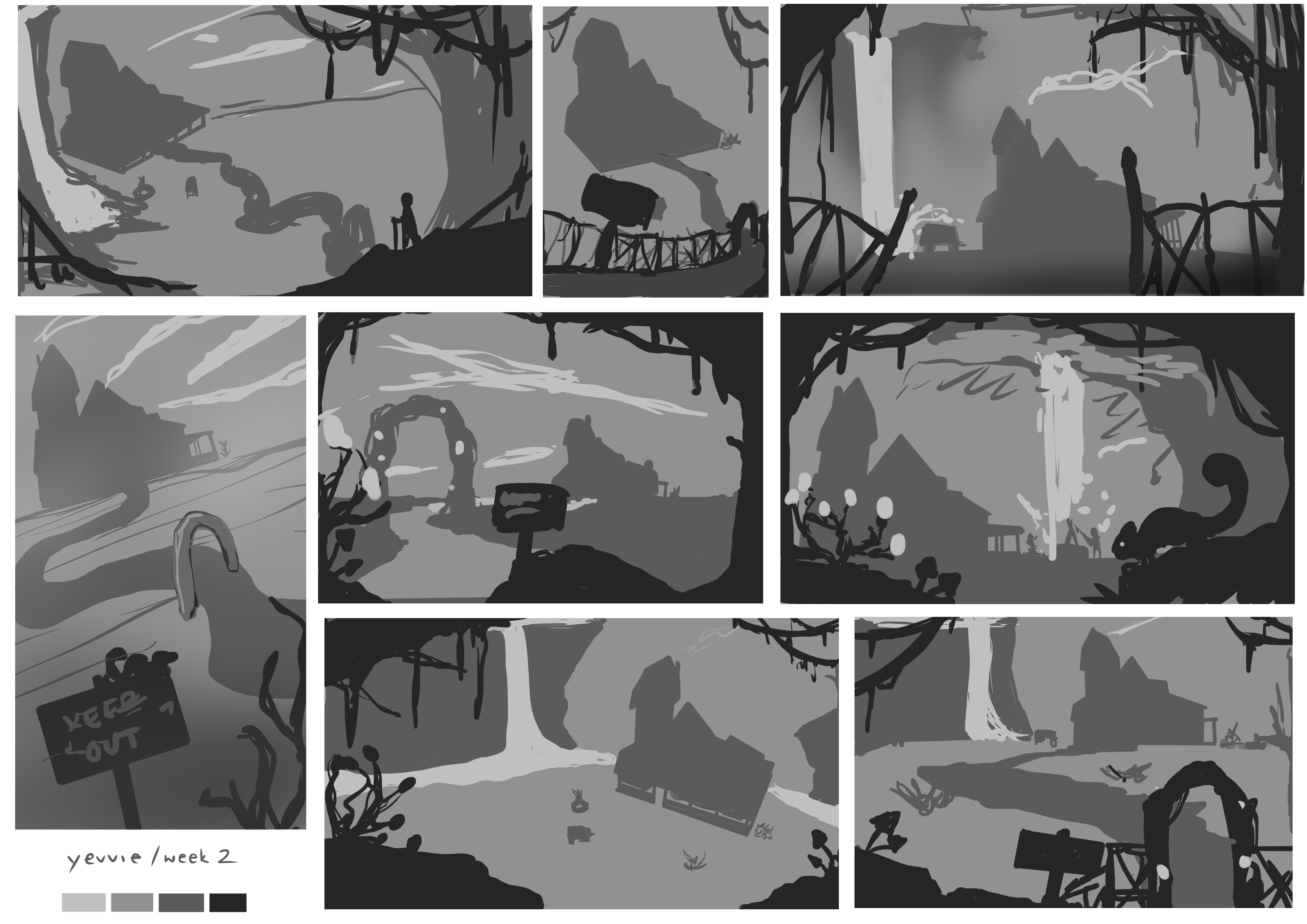 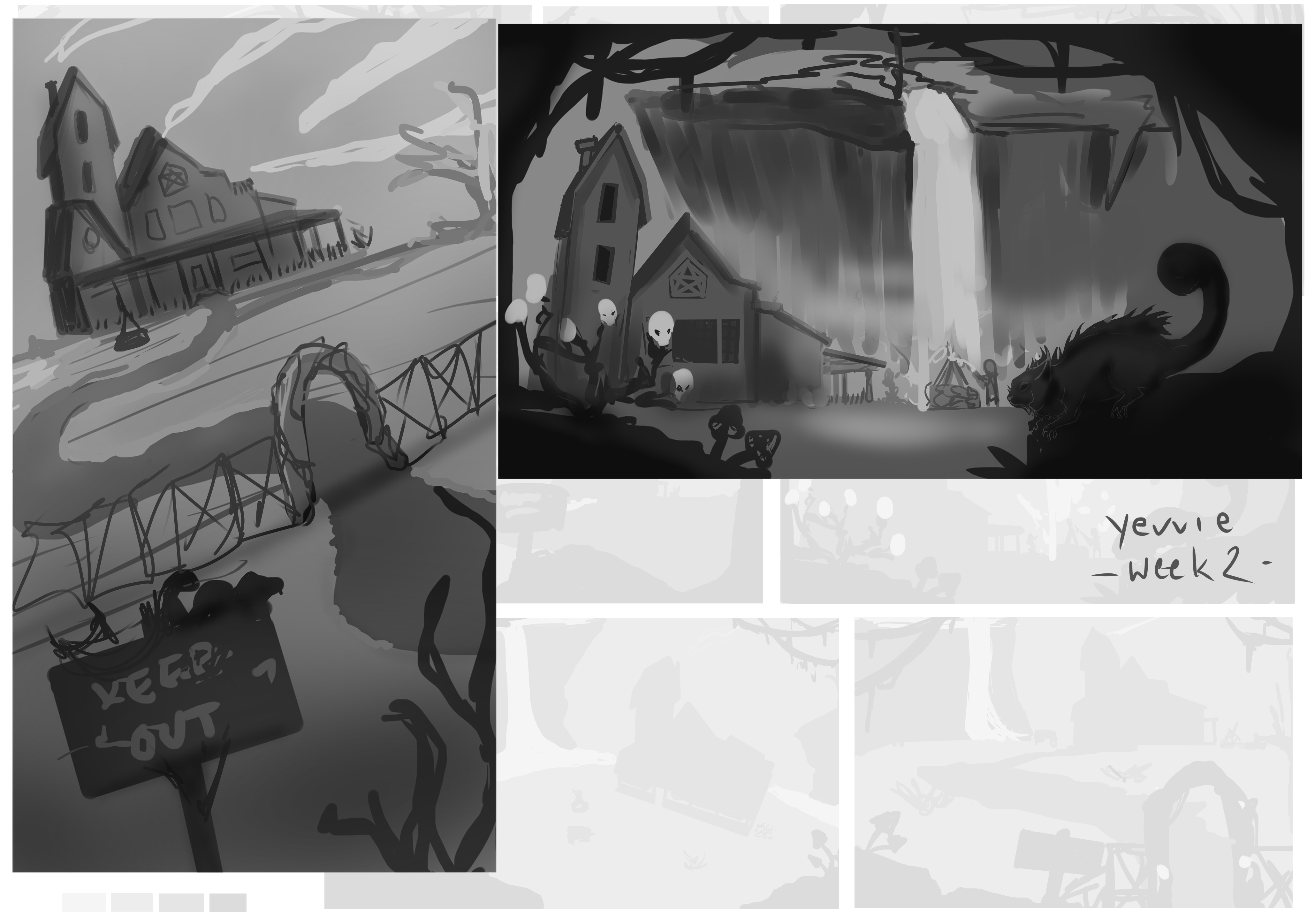 My ol’ trusty bamboo pen died on me at the end of last week, but got it back to working state yesterday

I was worried I won’t make it in time!

I noticed how much struggle I have with defining shapes on architecture - I’ve never done it before besides quick doodles, and I really gotta work on that this week. After all these years, characters seem so much easier to draw, but environment is so much fun…