Hey Mark, cool characters my friend… the snake with the glass helmet is fantastic

great!! The group of little green aliens is fantastic !! Love all the characteres !! ( perhaps some childs playing with some aliens

more a wish than a critic

Lovely. The shopping cart has me very intrigued. So much to see…

mmbenya
Thank you Matt. Much appreciated! I just hope the scene does not look too messy and discordant when I’ve fully populated it. I’ve deliberately kept the colours very soft and ‘watercolor-ish’ because I think that can help ‘calm’ the image down.

DaVee
Thanks David. Yeah, somehow those Roswell dudes have embedded themselves into our culture as the classic UFO shape. There’s no way I could leave them out

yl924
Thank you. Much appreciated

Hasch2o
Thank you very much.

When I was a kid I also used to love Mordillo’s work. I think I had one of his posters on my wall. I try very hard not to copy other people’s style but I can see for myself that, despite not having looked at his work since I was a kid, I must have been influenced by the great Mordillo. Thanks for your suggestions. Yes, I can definitely imagine some aliens hanging off some ceilings!

I’m glad you like the trolley too! (They walk amongst us)

brrrhmmm
Thank you very much. That is really kind of you

Paul4wood
Thanks Paul. Much appreciated

handlebar
Thanks buddy. Colour is something I have always struggled with. So some of the colour gurus here were very helpful, like they always are. I’m glad you think it’s working better now

Russel-Nash
Thanks mate! I’m really glad the background is working better now. I thought it was working fine before, but now when I look at how I had it, well it looks boring and wrong. These challenges have been really good for me in that kind of way. I always learn stuff

MartinNielsen
Thank you Martin. I appreciate that a lot

Ferx
Hey buddy. It’s always great to see you in these forums. Thanks for really nice comments. I like your idea of a child playing with some aliens. Perhaps the child’s parents could be distracted and looking the other way while the child is about to poke an alien in the eye or something. There is definitely some comic potential for me to think about.

Yes, who’d have suspected those shopping carts were aliens? The image is now becoming so complicated that I’m having a bit of trouble finding things in there myself! And there is more to come…

Once again I’m grateful for the feedback and ideas. I’m gradually building up the amount of detail, both in the aliens/humans and in the environment. For example, I’ll be putting in things like phone booths, maybe a cafe or some type of market, and other general signs of occupation. To a large extent I’m limited to only drawing things that can be seen from a distance.

In all my updates so far I’ve needed to degrade my image a lot to squeeze it into the 150k file restriction. So this time I won’t degrade it so much and instead just upload a smaller section. To give an indication of how big I am working, here’s part of the image at 100% resolution. 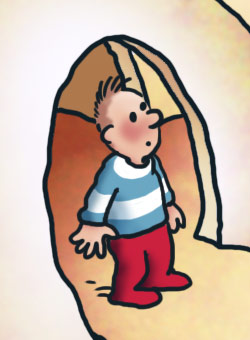 Here’s how it’s looking at 25% resolution. The more detail/aliens I add, the bigger the JPG size, so in order to not degrade it too much this update I’ve cropped it heavily

This one makes me smile. Reminds me a bit of Mark Kistler’s Imagination Station and that big orange wall he used to draw on. Just keep adding those critters!!

I’m loving all your little updates, Mark! I can imagine a fully inhabited and bustling civilization when this is complete!

I would also like to suggest further details to the environment such as drainage system, floor tiles, litter and litter bins, slime trails from certain aliens and people almost slipping on it, alien droppings and people getting annoyed by accidentally stepping on it :), etc.

Everything is coming together so beautifully!

this makes me smile everytime i see it : ) excellent.

Definitely reminds me of Mordillo’s work, but not without being original.
I’m really enjoying this thread, great lines and amazing work.
It also does look like the work of an illustrator, very professional imho
The detail on the aliens is incredible fun

Just wanted to ask, mdavid do you draw pencil on paper and scan the result,
or are you working with a tablet directly on screen?
Best of luck.

Hi:wavey:,
I like your art, unique and different.
Good luck to you:thumbsup:

Fetus23
Thank you Ryan. Much appreciated

jeremoo
Thank you so much for your ideas and encouragement Jerome. I definitely do plan to introduce more details like what you suggest

Neubius
Thank you very much. That is very much appreciated

Spin99
Thank you very much for the kind words.

I drew the city/environment on a large (A2) sheet of paper at first and then scanned it in and traced it on-screen.

Since then, everything has been done with a tablet on screen. All the aliens and additions and details are drawn and coloured directly on screen with the tablet and the pencil is no longer used.

To be honest, I just can’t draw as well on screen as I can with a pencil on paper. Personally I think my drawings on paper always seem to have more character and energy and spontenaity. So it is frustrating and something of a struggle too to work with a tablet.

I find that even drawing a simple circle often takes lots of attempts to get the kind of circle I want. But there are efficiencies in the on-screen method of working that totally win me over and an image like this one is way beyond what I could manage on paper, especially when it comes to colouring.

I’ve found that working fairly big on screen gets me closest to the kind of looseness and energy and also control that I get with pencil on paper so that’s why I’m working on such a high-resolution file (7635 x 5580 px). All the work since my original scanned drawing is done in Photoshop. The line-work is on a separate layer so I extend the colouring for a few pixels underneath the line-work, so there are no visible gaps between the lines and the colours - and that is another reason I like to work in high resolution - it allows for my line-work to be sufficiently wide (5 pixels-wide brush) to allow for that colouring to extend underneath.

SJoPu
Thank you very much!

Hey Mark, the bouncing balls aliens are simply cool!! Love the detail for one of them closing the eyes before to go down in the stairs hole … hahahahah great

Really cool touches on the whole image!! Cheers my friend!!

Just realized there is a new challenge. And got Uplifted right away by seeing your entry.

This drawing looks a bit a roadmap to the creative part of my brain actually
. At least it feels like this sometimes
:surprised

So cool ideas and so sweet character designs! I really love your entry and can’t wait to see the massive composition you’ll present as the final image!

Oh wow this brings back so many memories of Dr. Seuss books (among others) as a little kid! This is one of my favorite entries so far! I hope the final composition will be really big, with tons of little funny details everywhere

Thanks a lot for sharing your technique in such detail. I really like your colouring (amazing) and the lines look great. Must admit I haven’t been drawing much since took other profession, but equally battle with the tablet. But it’s ok for painting displacement in 3D, I even use the mouse sometimes, just getting around to 2D images is a different story. I see you definitely have a lot of success there. Have to look up that Crazy Cars book

Nothing like the feel of soft graphite on thick paper, and I do wish I’d framed those Mordillo puzzles when I could have

Thanks for the rundown of your workflow Mark, i was going to ask you how you did the linework, and now i know. Great progress.

Yes, I like to think that cowardice is not strictly limited to humans

Try
Hey Per, it’s great to see you here buddy! I can assure you there will be more aliens by the time I’ve finished

digitaldecoy
Thank you Daniel. That is very kind of you

Yep, the file is already pretty big. When it’s finished I’ll put in a link to the full image where it can be looked at in sufficient resolution to see everything

ivanisavich
Thank you so much for your kind words. I really appreciate it

When I was a kid I was a big fan of Dr Seuss books too. By the way I had a look around your website and am super-impressed by your work. It is fantastic!

Spin99
I’m really glad my workflow was of interest

I’ve finally started adding signs of civilisation and more are on their way. I’ve been adding more aliens too.

Because the upper parts of the image (distant hills) were looking a bit empty I’ve also started adding a few flying craft. That wasn’t my original plan but I think the image needs it

Delicious additions! Adding the spacecrafts at the bg over the sky is a smart idea! Keep going, Mark!