Great work as always, but here are
some thoughts on my part:

The other pose of captain Orion looked more natural and actually had a reason - this one looks very “movie-poster-macho” like and doesn’t really make sense in the situation.

Keep up the great work!

This looks close to a final. I agree about the planets and the atmosphere.

Thank you! Towards the end I always tend to noodle around with the colors in order to make it look ‘better’. This time I tried to stick to my color concepts and I’m glad that it seems to work out.

That’s a very nice comment, thank you! With this project I have a special interest in the integreation of the material that ZBrush gives me. I was playing around with the Software since last July and I have tested several of the techniques I ultimately used in this artwork (the multipass rendering, the 2.5D detailing and the Deco Brush Trees e.g.). It was important for me to put all these things together in one artwork and find out, if it works. I’m quite happy with the result so far but I also found out a lot about the downsides of 3D from a visual standpoint. I might go into detail about that when I’m finished with the image. I also will see if I can sum up some details about the compositing. It’s quite complex by now but it follows some simple concepts.

Thanks for your input! You are totally right, the planets are within the atmosphere. I wrote about that a few post up there. Captain Orion is stranded in a place that I currently call the ‘atmosphere cloud’. There are many small and big worlds within this atmosphere that can all be reached trough breathable air. Just think Super Mario Galaxy and you get the point.

I wanted to create a rich universe of different worlds and alien races but without having the aliens to have an advanced technology. The aliens travel between the worlds with balloon ships and generally have the technology of the earth’s 19th century. Captain Orion gains a sort of superhero status because he’s got energy weapons and that stuff. Additionally he’s got some super powers because gravity in the atmopshere cloud is lower and he’s able to jump further and lifting big objects more easy. You see, I sort of want to create a fantastic steampunk world with sci fi space and superhero elements.

Concerning the pose, I definitely see that the old one had it’s merits. But the new one has them, too and I’m not going to change it. The whole scene evolved into an epic decorative piece and the stylised and iconic pose does work in this scene, I think. I was aiming for a Frazetta in the first place but arrived perhaps at a Vallejo. Not that I want to compare my work with these outstanding artists, let alone compete with them. But you hopefully get the point - I did not really achieve to channel the action but hopefully compensated that by supporting the iconic style. I also wrote something about that above.

"What the heck am I doing? A few minutes ago I was happy to having finally managed to scare that eerie little girl away. It’s bad enough being stranded in this foreign world. I can not risk to get into contact with whatever alien natives of this strange planet.

And now, after barely having survived the crash, I’m running after her and risk my life again.
Maybe it’s her screaming. Although coming from an alien throat it sounds so familiar. This universal sound of fear and desperation gives me the creeps. And it triggeres something deep inside me. I’m not thinking about risk any more. The only thing that’s in my mind now is not to let it happen. I will save this alien girl. I’m not giving her up."

I feel really relieved now. With this project I ventured into unknown territory. I gathered everything that I learned about ZBrush in the last 10 month and put it into this piece. I learned a ton of new things, too. And in the end I’ve come up with an image which marks the beginning of a universe that I now can explore. That alone makes the challenge a success for me. I wonder which adventures Captain Orion will experience on his way through the fantastic world he’s stranded in. We hopefully will see!

I thank everyone for the wonderfully motivating replies on the way and for all the invaluable advice that surely has lifted this image up to a higher level that I could have reached alone.

I’ll now lean back a bit and enjoy the summer sun that finally has emerged over Germany!

And for you I have some details of the image in full resolution: 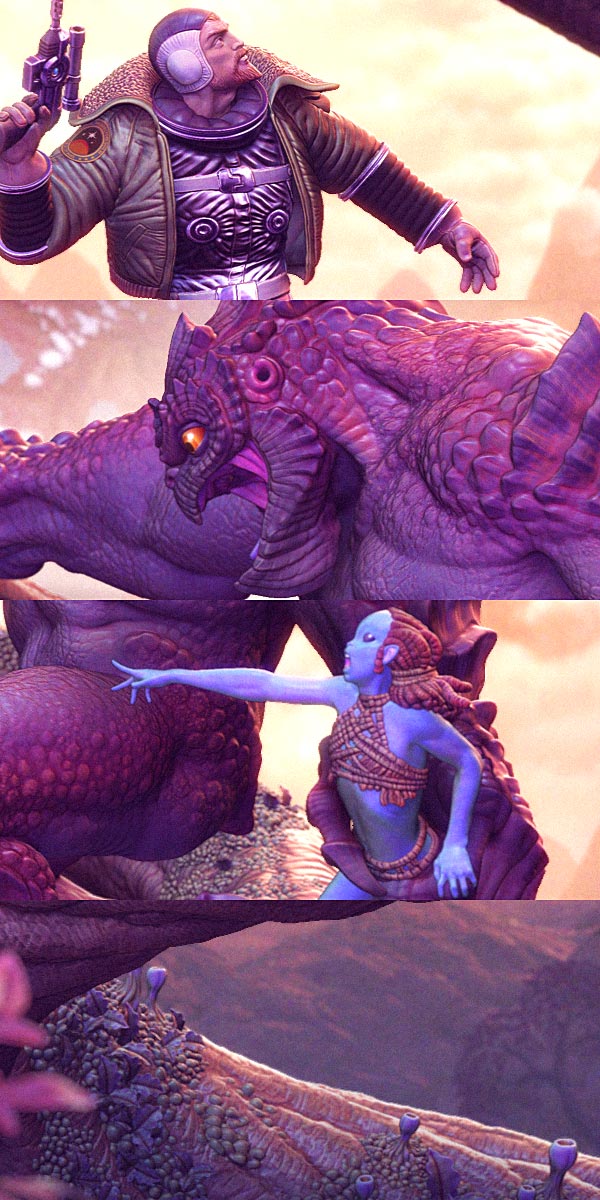 Actually that’s half resolution. The image was rendered in ZBrush in 4800x3600. Since ZBrush has no antialiasing the whole image was finished in 2400x1800. I used Richard Rosenman’s Depth of Field Pro Plugin in Photoshop. There was no other software used than ZBrush and Photoshop.

That turned out really great!

Awesome colours and everything works together nicely to create a convincing scenery.

I’d separate the right thumb of the monster a bit from the arm/hand, formwise.
(If it has a thumb at all. ) It could be pointing up a bit and would lead the eye into the direction of the tree even a bit more, perhaps.

I’d separate the two lower legs a bit colour- or valuewise. Same goes for the lower beak.
It works better in the larger version and there is of course no need to separate everything to death but those were the areas that I visually “tripped” over.
E.g. his right leg looks a bit as if it would grow out of the back of his left leg.

But alltogether you created an amazing, very detailed piece without loosing the readability.

The longer I look at it, the more I think the piece could profit perhaps from a more direct and stronger lighting. Please don’t get me wrong, it is awesome the way it is right now and works really well. So you can really lean back now and enjoy the good weather.

But who knows, one day in cold December you might find it fun to play around with lighting a bit. I think it would be worth it.

I mentioned that I might write something about the compositing process I used on this project. I have now summed up the most important steps: 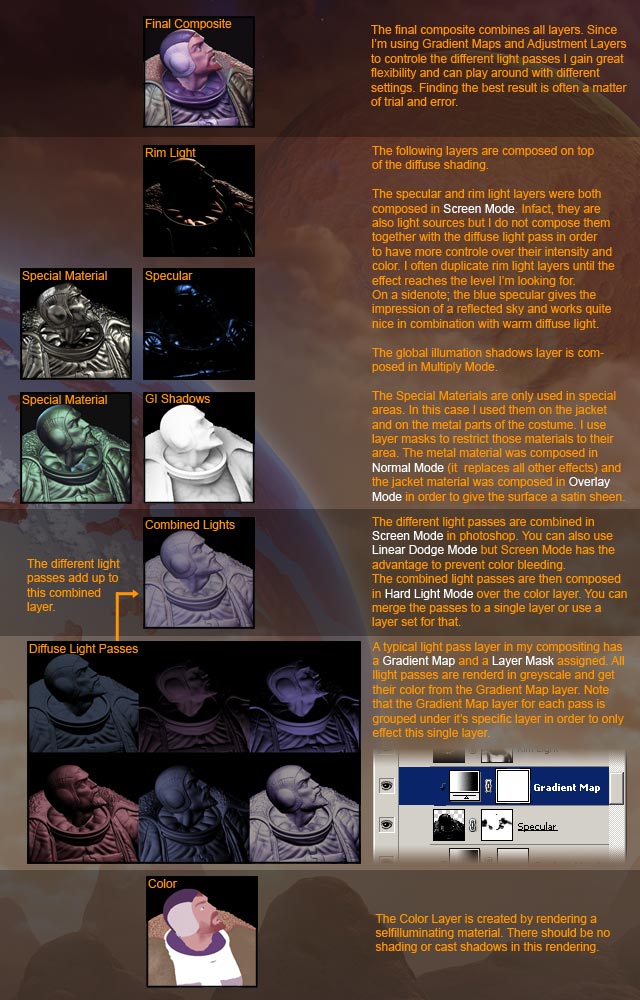 If there are any questions left about that, just ask them. I’ll try to find answers.

One drawback of ZBrush is, that it does not handle cast shadows very good. That’s one of the main reasons why the whole scene is lit with a rather diffuse light. I don’t kow yet which role 3D will play in my future projects. If I decide to do more in 3D I might have to work with an additional software package with full rendering capabilty.

congrat digi, good luck in judging, all the best~

congrats on the final image, the details and overall feel is amazing. Good luck

Hmm the purple atmosphere is so sexy like the alien girl. And Orion is sexy to. Alien is maybe from marzipan… I’m just kiding

Well done ilustration for space fairy tale. Thanks for explanation of layers. You are the winner

I can only add to the chorus of compliments…congratulations for this. it really feels as if you’ve climbed the technical mountain to achieve this piece…

Thank you and best of luck

This is a great didactic thread you have. Also a stunning picture here. So dreamy… Very well done man. I must thank you at my own. :applause:

Wow…this is one of the best ones yet! Best of luck!!!

Thanks for all your encouraging comments!

Grats. Well done! Nothing to add.

Congratulations, Daniel! You can be proud

The best of luck!