I thought it was about time we started a thread where everyone who cared to could post useful tips and tricks and ideas. We’re not just talking purely technical matters and this isn’t just about any specific program: just little tutorials and whatevers that you’ve come across throughout your life as a digital artist. 2D, 3D, traditional… it doesn’t matter. Just have at it. Make sure you explain extensively so it’s easily understandable

As quite a few people have asked me about brushes and the brush-settings in photoshop, I threw together a little tutorial for them.

And here’s the brush as promised:
the test brush

[/b]one thing i’ve noticed in many human anatomy-related works is that people get the leg proportions distorted a lot. a general rule of thumb that i’ve learned is that the leg should be approximately twice the height of the torso (from the shoulder to the pelvis). the top and bottom halves of the leg are pretty much the same length.
i apologize for not having any diagrams to accompany this, since i’m at work right now. if anyone else is able, please feel free to illustrate my point and post it.

Wowee! That’s such a beautiful, in-depth tutorial. Thanks Linda :love:I wish I had some way of repaying you for it- anything you want from me, just ask!

When creating characters for 3d, you’ll be wanting to make themexactly like you drew them. When drawing them you should keep in mind that your eyes are always working with parallax. So you will need to clearly define dimensions in 2d space which should result in accuratetranslation back into 3d space. An easy way would be surely to take photo’s with an extremely lengthy zoom lens. But when drawing use rulers/lines to compare a side and fron view and do it as technically accurate as possible.

You will find this pain in the ass wll save you extreme confusion when modelling, which is obviously more timecosnuming. CHeerio.

Often you’llfind fastly complex object which are so interesting that you’ll want to reproduce the in 3d. A basic phong or blinn shader won’t always help you here. But usually since thesse surfaces have on all there points one thing in common you can cheat the eye into thinking t sees the surface like it’s used to see it. The common aspect is all the stuff happening has to point away from the surface normal, not directly, but it cannot point into the surface in most cases. With this in mind you can use the software you have to take into account the angle of incidence of thelight striking the surface to let the shader behave differently. I think most apps will allow blending of several tests of these in several ways.
Use this effect to cheat the complex light interactions on the observed surface.

Here’s an axample of some fancy very expensive looking fabric. I was raised with onyl women in the home, but can’t seem to stick a name on it, but it’s nice to see anyway.
First is an example of a standard blinn shader, it has a nice well adapting shading, following the curves of the object. It looks soft and kind of like a rubber sheet, but not nearly complex enough.

In this example I reused an older shadr I had experimented on. It has a gradient mapped to surface normals blended with a plain surface colour. I initially used high easily seen values but toned it down afterwards using the diffuse multiplier, basically does nothing else than say how intense the eventual result of calculation should be. That’s all to it.

WOW! Thanks a lot for sharing that brush tutorial,Linda!!!

My best universal tip would be to spend some money for an handy digital camera and always and I mean ALWAYS take it with you wherever you go, it’s way more important than having the best video card or more hard disk storage or whatever else you spend money on

There are so many little details that should never be forgotten when looking around, you can notice something interesting and tell yourself “man I’m never going for forget this amazing detail” but you’ll wake up the day after without it and it’s something we can’t let happen

Time is the best artist we can get inspiration from, it ruins textures like nobody else can (ok let’s exclude Linda from that eheheh)

Incredibly helpful Linda!
Do you have a fan club I could sign up for?

…use the search functionality on the forum…

…Use the force, :)meaning have some blind faith in your intuition…

this is too small to call it a tutorial… so i guess this fits well here.

This threestep painting tip shows you how to approach somewhat a 3d looking hair using highlights. however i recommend to use a drawing tablet for it.

the rule is just to think light direction, and paint white stripes where the light would it directly on the hair surface… great for wet curly hairs

I’ve found a lot of work giong from very plain lights, big misstake. Light can as a rule not be white, simply there exists no whiet light. So a well done image has lot’s of colour in it, well done being not overexposed or underexposed. OF-course the exception makes the rule, so by all means go greyscale or whatever. Just saying, coloured lighting is a gem.:wise:

here’s an example of adding coloured lights and a gradient mapped to a skydome/light. Allready becoming a bit more atmospheric:

Another light trick, bit off-topic but nice I think. Requires more skill than I have with lighting but I htink it’s coming across;).
boring version, very plain, but more interesting because you get a hint at what’s there. shader is behaving rather dull but it’s interesting nonetheless. Trick I find is to rather suggest than to show it all right away. Maybe that’s how they found less is more. Just being an ignorant jackass on my part.

but I made it to react to light in a way. SO here’s the thing with better coloured lights. Makes a big difference imho. More colour, less light, don’t shwo it all straight away. =0

. I was raised with onyl women in the home, but can’t seem to stick a name on it, but it’s nice to see anyway.

now u see why i never understand u one bit?

Jan-Mark, nice tutorial, but maybe you could explain a little further as to the shadings you used, rather than just general pointers- that’s the point of this thread after all

Yes…well…so like… turn me into some social derelict would you Squibbit!

lol, I gotta learn to make my own smileys, maybe that’ll help.

Ah yes forgot Theresa. I’ll get on it, but that takes more time, but for the meanwhile, another tip, use all the special effects you have in your shaders, but don’t overdo it.(:rolleyes:, and I did overdo it I think, ahem):

I’m not really sure whether it’s satin, it could be some exotic fabric fromthe east or something, lot’s of different silks, :surprised, uhm…needless to say it’s rare…

The question of rendering size for printing always comes up. I posted this in the
Lightwave forum before seeing this thread, so sorry about the double-post.

Example: Printer tells you he wants a file 17x11 inches at 300 dpi. Open a new file in Photoshop with the printer’s settings.
No need to save this file. You’re only using it to get your render size. 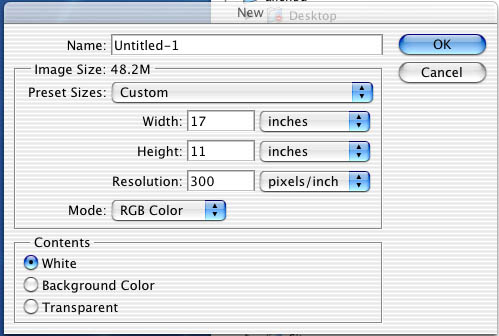 Go to Image>Image Size. Look at the Pixel Dimensions. Render your file at this size. 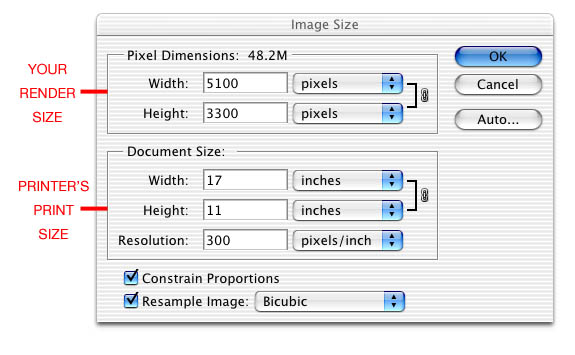 Now change the Resolution in Document Size to 300 pixels per inch. The size
automatically updates to 17x11 while the pixel demensions remain unchanged. 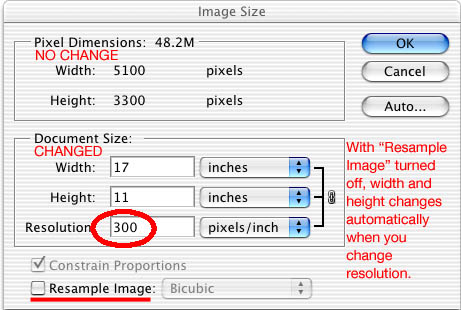 Click OK. Save your file. Send it to the printer.

your renders here are quite interresting. look like satin or silk… reminds me of my master&servant entry, which has really bothered me with the lighting!