This is an ‘artistic impression’ of the Antikythera Mechanism. The Antikythera Mechanism is an orrery of some sort, thought to be created by the Ancient Greeks around the year 83 B.C.
The mechanism was on a ship that sunk near the coast of Antikythera, a Greek island. The wreck was discovered in 1900, almost 2000 year later.
Enough of the mechanism survived to know its purpose which was to emulate the positions of the sun and the moon and possibly all the known planets, all by turning one lever.
X-Ray scanning of the object revealed a complex set of gears and even a true differential, the first known to mankind. Note that the original would have looked nothing like this version (it was actually encased in wood).

The trickiest part of modeling the mechanism was finding out exactly which gear goes where but I finally managed to get the gears to fit together perfectly. Perhaps I’ll make a short animation of it turning in a few weeks.

I made this image both for fun and for practice. I really learned a lot from the research I did for this, not only about different surface properties and lighting but also more about the Ancient Greek culture.

The mechanism was modeled in 3ds max 7 and rendered in finalRender Stage-1 (from the edu Turbo Toolkit). After that a lot of work went into post work using Photoshop and HDR Shop. For the modeling I also used PolySpeed Beta and PolyBoost. 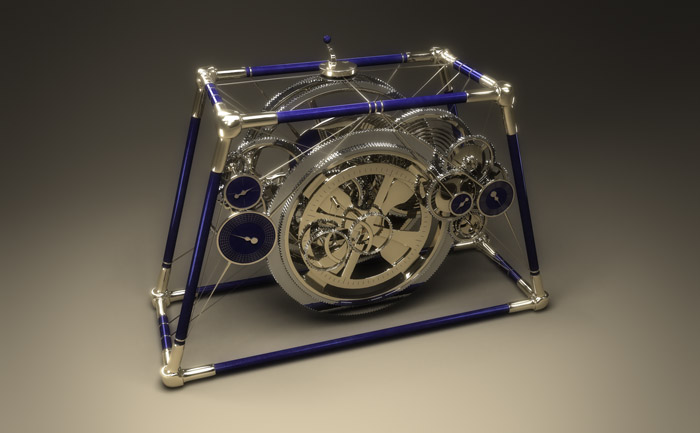 Hope you like it, and spare me no critique!

And thanks to the cookie glomping, smiley making people from the CG Society!

I love these planetary gears. Mechanisms that were forgotten during more than thousand years and reinvented. Makes some people say industrial revolution began in ancient Greece before having a pause for a long time.

very nice render, photo realistic love the detail , love the design , love everything 4star from me.

The result is worth it; beautifully done! Five stars from me.

Beside the technical solution it looks pretty awesome.

I WANT TO SEE IT ANIMATED

Wow- I mean that is way cool. I would reccomend only the following- change the thumbnail?

I mean- that thumbnail was neat- but I almost never would have known it was as cool as the finished art. Then again- it was a happy surprise. Way cool.

Impressive work !
I want to see it animated too !

Thanks for the comments!

Very well then, I’ll go and animate it.

Looks excellent Rens, I love the warmness of the image.
Animating it should be fun…

Animate it!
As I said before, I love the atmosphere in this piece, you can tell you worked to make it seem…photorealistic and atmospheric as well and you meshed the two perfectly, it looks soo real and yet has this ethereal glow to it. The dof you got spot on (congrats!).
I also like the subject matter- an antique machine, but you made it look sort of like one of these desk toys with the silver balls bouncing off one another. The fusion makes it funky.
I like it a lot, keep it up Rens!

Glad to see you finish this. You should be proud of yourself. It looks realistic.

Spectacular, modern view, on a fascinating subject. I recall a Discovery channel show on ancient technology and this was one of the showcase items. You really have done an amazing job on this.

Some glass on top, and you’ll have yourself one fine coffetable

Very much real… good work on material and render…