Its cool, I totally understand… I’m in the process of moving and finding a place and trying to work my job and this… Plus its christmas time, damn stressful month.!

So I was wondering paul, for the suggested look dev images with the hdri ball showing which map is being used can we use the Paul Debevec hdri library. Since its free and available to the readers of the book… Or would this create problems for publishing…?

:arteest:So I’ve been working on the monica head skin test and added some various procedural textures over her face to add a few extra details and including for the bump… its all very minimal. Went and changed the light probe I was using for the fake hdri and added an occlusion map to define her better, made a cheap scatter map from the exsiting maps as well. Also this time around I went ahead and played with post-processing in photoshop…adding some chromatic aberration DOF effect and color tweaking to bring it more into the film processed world look… Things I’m looking forward for us to incorporate into the creature renders…!

Here is the latest test… 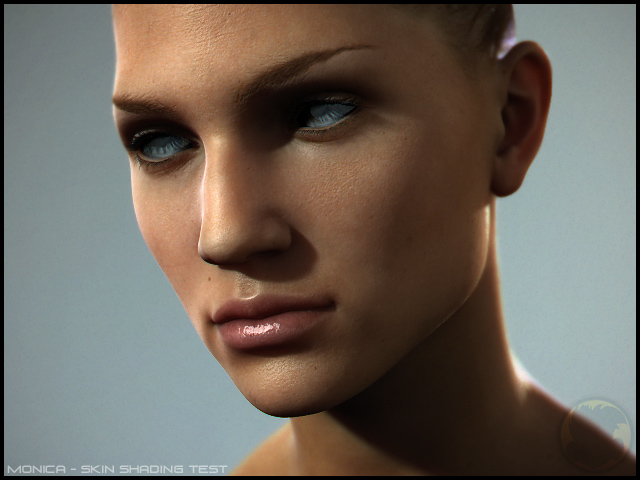 hei miguel, I had been crunched this WE head coming soon tho, great stuff on those shaders, cant wait to see this applied but work comes first… in this case job hunt!

I know the feeling, I’m gonna get busy soon again at work. All this R&D won’t go in vane, its just pre-game for you guys awesome models… Good luck with the job hunt…!!!

kind of looks like shit when you take it down to 90kb…but here is a crack pic from the shoot.

hello! great stuff Paul!
I made it to go to Italy, so the next updates will come in a bit probably, but I’m sure everybody is enjoying their upcoming christmaese!ù
cheers

:applause: Great Stuff Paul!!! These will come in very handy!!

my awesome roomate sent me the files I forgot in the states, I’m back on rocking this bitch! eheheh
BTW i forgot my wacom pen as well and no WAY u can find a wacom shop around here damn lowteches!

This is great to do paul, If you can keep it all on separate layers in the psd file it would help out tons. We can use those layers for masking, esp layers for sweat or slime and blood, those layers can get another shader to layer over the skin… Yes that would be awesome if you could give me some batch of the photoshoot for reference and testing… maybe at this point anything pertaining to the stefanos creature…

I’ll give you separate maps to plug in…

well get to playing around with that later…

as soon as Stephano releases the UVs i can get started…

First topology iteration on the woman (head only) to start messing around…
not final so please keep all your projections, the model won’t change position in world space from now on but topology and UVs will…
The model comes unsmoothed and a smooth 1 shrinkwrapped version on the sculpt (see naming) the uvs had been made on the unsnapped so some very minor stretch maybe visible on the higher resolution one but it’s more true to the shape of the sculpt, a workflow with texturing on the lowres and then a check on the higher maybe fitting.
The eyes are a different obj included in the archive, the UVs are conformed to the head UVs, you can combine them and texture them altogether in one map.

PS: the filesize limit here for upload is quite pityful… only 290kb… we gotta find a solution to this issue, is gonna become key in a very short time!

PPS: It looks like I’ll start my next project the 19th of January so I’ll have 2 full weeks to work on this after I come back… I’ll probably bring it close to completion if not better

hei I sent the files ask you asked!
2 gigs won’t be enough in my opinion , would be better to get a cheap FTP account with password and stuff
cheers
S

Awesome start there Stefano on the base… Yea I agree some sort of ftp would be nice, when we get this bad boy rolling I’m sure file sizes will go crazy…! So I was thinking it shouldn’t be a problem to texture and shade your simple base mesh without worry if you change the mesh or the uv’s. Since in the end if the two models are in the same space area, we can just use maya’s transfer maps tools and project textures from model to model… There might be little distortion, but I’m sure it would be easy tweak painting. Also of course the different photoshop layers would have to be projected to the final mesh you give us. But I see no reason why we can’t do this… I use this workflow all the time to make video game assests, where I will texture the high rez zbrush model and then create a base mesh with my uv’s and just transfer color maps as I would normal take a normal map into account etc…

By the way Hope everyone has a Happy New Year…!

hello All, I’m back and rolling
this is where I took my lady today, now I move back sculpting for a bit on the big creature
any C&C on topos is wellcome, nothing is final, many I’ll thorow many things in the topo but I need a pass down to relly figure stuff out,
here’s the file

details, First messing around after work for 30 mins… This is a rough idea of what I was looking for cracks and crackles and stuff… Playing around I enjoyed giving her some more inhuman alienoid elements like those big veining etcetera, I’ll work on it tomorrow and redo this since i went to split the model too early and i need it together a bit longer before giving myself the excuse to split it up… In this one the head is @ 8Mils
PS: the butterlfyin g of the details of course WILL NOT be there
this is a quick resym to check the look and feel
cheers