Hi, Slejf. Looking good. It’s dramatic. Taking approaches I wouldn’t have thought of, I must say.

Several elements at once. Interesting the way of skating across the surface. I think the reflection works. I like it.

Just wanted to say something. I need to run out the door.

Thank you very much Joel!!
heres another one 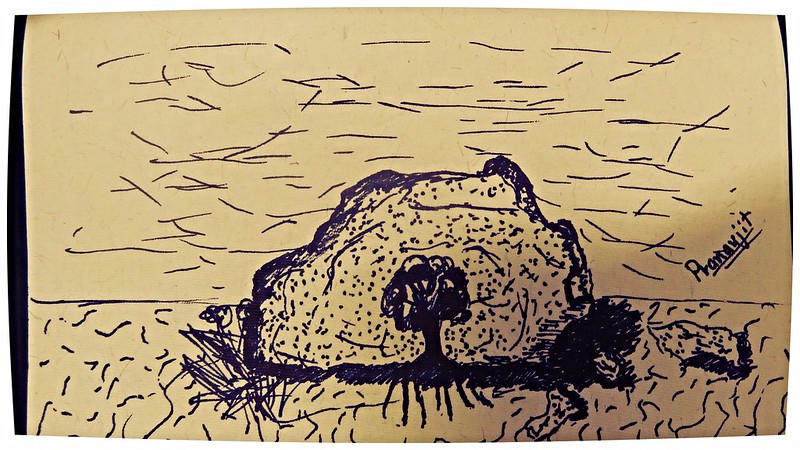 I’d say this is a better composition to the earlier one with the standing rocket. Different.

It’s a design, so I call it a countable.

From one of the pods. I think it’s fun stuff to think about. I actually would like to model all this in sketchup, get a view from this angle and paint up a more complete pic.

I realize all that at the bottom of the sky is light pollution, but, it’s what I got.

Disclaimer: I don’t know nuthin’ about this. I’ve seen a couple of things about it. I guess the idea it that it moves the ship along like a sled or a moving walkway.

But I just saw a picture that looked more like the wave recently. I don’t know about this stuff.

I guess this could be called fan art.

It’s based on the book by Larry Niven, called Integral Trees. I read it a looong time ago.

This scene, as far as I know, isn’t actually in the book. I don’t even know if there are any space ships in it either. But I put it together anyway.

The idea of the book is a zone around a star, sort of like an asteroid belt or the rings of Saturn, called, I’m pretty sure, the smoke ring. It’s composed of breathable air. Somehow people got there. Various free-floatng plants are scattered around. Some are like big floating bushes, or forests. Some are these integral trees, sort of like spinning batons, with a big trunk in the middle and tufts at the ends, like a Q-tip, made of branches and leaves, which live off the air and light and serve as habitats for people. The spinning of the trunks creates artificial gravity, centrifugal force. How the spinning starts, I don’t remember. But there it is. The name integral trees, if I remember correctly, comes from trailing of the leafy tufts, giving them an appearance similar to an integral symbol.

I think there might even have been big floating “ponds”, large globules of water collected here and there. I didn’t get to adding any of those.

Probably wouldn’t want to get stuck in one. And getting flung off the ends of one of those trees wouldn’t be great. Fling you right out of the air zone without a parachute or some winglets. Actually, they do use different fins, or winglets, to flap around in the book.

I was surprised how chaotic everything looked. Like a big top. I’d expect a lot of noise, like a big machine, or grinding gears. Probably pretty quiet, though.

What’s so fascinating to me about these spinning habitats is the result of a unique world apart. Sort of like walking into a picture book, or designing a holodeck scene an stepping into it. Islands are like it. Australia is like it. Even walking out on the surface of Mars. It’s a place you can walk around on separated by distances of a different medium. Slightly improbable.

Anyway. That’s this one.

Really similar to an image I saw when I was a really little. I think I found it. I didn’t realize how easy it would be to find. But I made it anyway.

Another space painting. Thanks, Slejf.

I count 30. Thanks to the CGTalk forum and Roberto Ortiz. And Slejf, I know more about space painting now.

I never did introduce myself. Too frantic.

I’m Joel. My drawing remains in continual development, since quite a while back.

I have professional experience in animation for computer games and television programs.

A lot of my computer experience has been in animation. Lately, I’m really picking up the baton on illustration.

Music and aviation are other interests.

The thread for JULY is open

the topic of the month is GREEK GODS.

But if you wish to continue posting space painting, go ahead do it on this thread.