Simulating flight 2019 with a spitfire

So every few year i like to come back to try something new with c4d & aircraft.

My last outing was a while ago…

I made a flight simulator in xpresso a few years back. It took me weeks to get up and running properly… But i was happy with the results… http://youtu.be/CAfMWL8ntw4 Much has changed in c4d since then, from proper dynamics, python integration & even aerodynamics. So i’ve decided it’s time for me to see what i can get running in R14. I’ll be putting a few days aside to see what i can do and i’ll be posting the results here…

So now i’ve decided to fire up the old files, but try something new. Seeing as i have a working flight model, i thought i try & get xpresso to fly the plane. Less work for me, & i’d like to see how a basic AI (very basic) works out…

I will upload a video soon but here’s a still for the meantime. 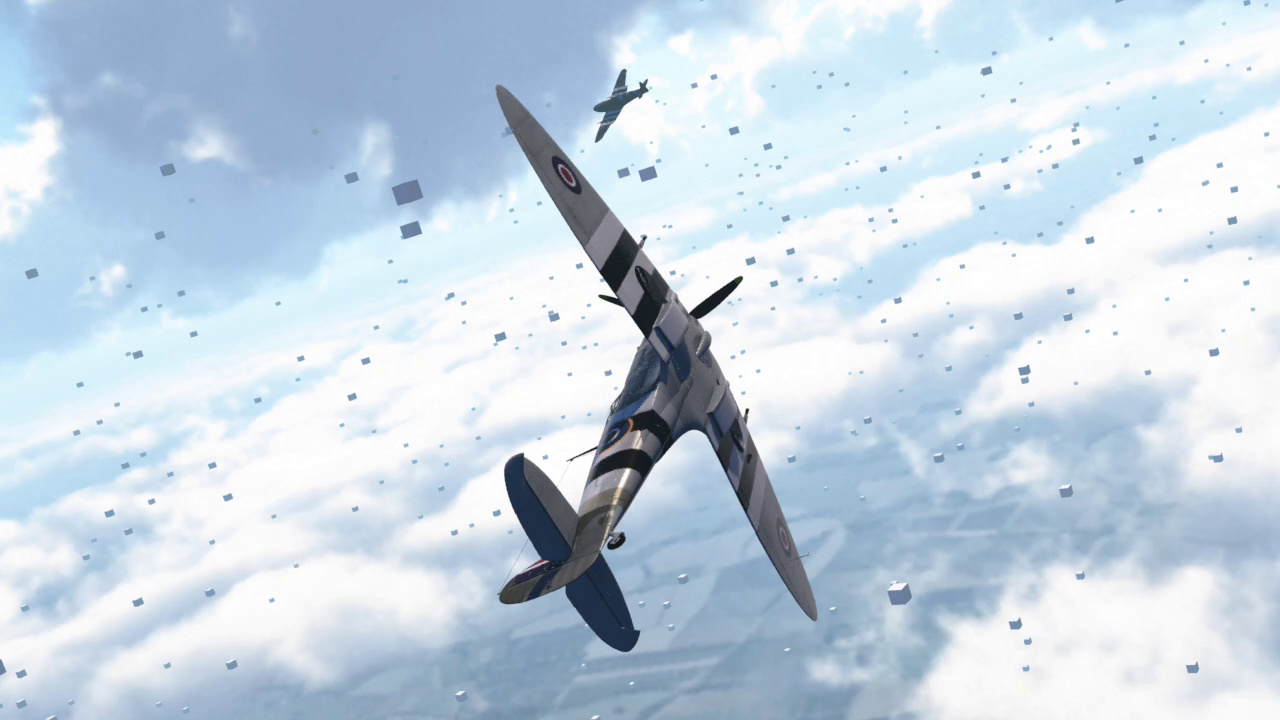 I am so looking forward to seeing your results.
I’d rather be interested in insights into the scene instead of renders. But I can of course understand, if you wanted to keep it for yourself. In any way, great project. I like it a lot.

I understand, what kind of insight would you like? The render set-up, the logic, the xpresso set-ups?

This started off as many of my side projects do, as an idea on a beer mat.

Seeing as i already had a (simple) flight model with controls, i got to thinking. If i added a pointer in the cockpit that pointed to a target, i could get the controls of the aircraft to roll & toward to target & then use the elevator controls to pull the nose up onto its target.

This way the aircraft will copy the rolling technique of the ww2 fighters who’s engines would stall if they tried to pull negative g’s (It also meant they could keep eyes on their target). Win win!

So next up i might have run before i could walk, but lots going on here.

I started to add shooting logic. So what better way to test it than pitting two fighters against each other. To see what the xpresso code is capable of (at the moment).

As you will see there needs to be some tweaks. (the two planes keep colliding for a start). So far they have not been taught to break from their targets. They also turn too fast & don’t quite target properly…

I will add particle effects later, these gunfire proxy meshes are just so i can see if the plane is opening fire.

I find sometimes its good to throw yourself in at the deep end. To see if you can float yet.

More soon. Any questions are welcome.

Well, what kind of insight am I interested in? I’d say all I can get regarding the scene setup and internals.

Coming from an engineering background myself, I often thought about such a project and then shied away from the complexity just for fun and myself. On the other hand, I do have a little programming and Xpresso experience. Maybe I could help out with something? Or at least stand in in order to discuss, if you should run into issues?
Just genuinely interested…

What kind of stuff have you done previously fella?

Working with xpresso, i always try & cheat & think of easier ways to get stuff done. Breaking it into bite size chunks, then bolting stuff onto them.

i am now tackling problem 4 on a list of 23 (so far). Most accomplishments open new problems too

Problems i see arriving in the future amongst other things will be getting the code to track a new target (at the moment i place a tracker in the hierarchy). When these problems arise its here i will try & work them out.

I wasn’t expecting a job interview

I have worked about 15 years in automation industry, developing in VHDL and C (mainly), drivers (Linux among others) and for example a CAN core for FPGAs. Afterwards I worked 4.5 years for Maxon, main focus on 3rd party developer support. Languages spoken: C, C++, Assembler PowerPC+68k (very little x86), VHDL, Verilog, Python, Basic (actually everybody speaks Basic, but as I like PureBasic for various reasons a lot, I thought I’d mention), Java and a bunch of otthers I would probably need some reading to revive the knowledge. For my own I have developed three C4D plugins (nothing relevant), two of them released around 2012 (and shortly after rendered redundant by Maxon releases). Plus a plethora of small plugins, when working for Maxon. I was one of the developers responsible for Substance Engine integration in C4D (not proud) and also did the Py-ParametricTools on Maxon Labs (in collaboration with @noseman, who sparked the idea and under unbearable pains tested my results).

Not sure, this qualifies… but i also don’t want to interfere with your roadmap nor want to talk you into something you don’t want. If you like it the way it is, great, I’ll happily watch the progress from the sideline.

lol. No job interview, But if it was, holy cow…

Well then i guess you might just be able to help.

At the moment its just a framework of ideas & for sure it will soon get difficult. So i will certainly be asking for your assistance if that’s cool.

For the moment i’ll start adding remarks in the xpresso nodes so they will make more sense later.

Sure, you are welcome

So lots of room for stuff to do. This is still just a prototype basically…

So this one looks a little more simple than the last. But don’t be fooled by appearances. He now has mission guidelines, which will eventually allow him to decide what to do for himself.

The model is new as well. I have added a function so you can just drag & drop a new model onto my flight object to speed things up (you might notice the axis on the ailerons & the prop aren’t quite aligned correctly).

The red balls are his true orientation (which will help him to fly in formation soon).

So back in the digital skies (this time rendered with GI).

Our camera is following the wingman who’s trying to keep up with the pink target. While the flight leader trying to get on target with the green target (I have also fixed the problems with the axis on the ailerons & the prop).

p.s. I am liking the way the images are making themselves (based around AI, so they are kind of doing the right thing). I’m looking forward to seeing my bombers go in soon!

So sick bags at the ready for this one. Testing continues…

So this time my AI is showing that i forgot to teach it the importance of level flight, or how to use the rudder.

If you only rendered enough beer cans into the cockpit, you wouldn’t need to worry about the importance of level flight, either

The educational value of what you’re doing would be tremendous if you opted to release the source files.

Its taken a lot of beer to get this far. Maybe that’s where he learnt to fly like that.

As for open source, its a possibility later. I have already started marking each script to make it easier for other people to decompile my workings…