Originally posted by ChopinLives81
[B]Yes i have seen Debevec’s work…thats what inspired me to experiment with natural light rendering, but i’m actually not sure if i’m doing it correctly…i’m getting good results as you can see, but i don’t know if its the right way of setting of a scene the way i do it.

And thanx for the review [/B]

Paul Debevec’s films are rendered in Radiance http://radsite.lbl.gov/radiance/HOME.html which is a raytracing renderer, I think written in part by Greg Ward-Larson. I believe that it’s freely available to download for personal use as it was a governent funded effort. The scene files for Rendering WIth Natural Light are on www.debevec.org so if you were so minded you could actually render Rendering WIth Natural Light at home. You’ll need patience in bucketloads though, and I believe the freely available version may only be Unix compliant.

PS If you’re interested I did a tutorial on using Paul Debevecs’s techniques in a RenderMan compliant renderer including making my own high dynamic range maps. It lives here if it’s any use to you: www.andrew-whitehurst.net/hdri_tut.html

Cheers Andrew W - i’ll be sure to take a look soon. Thanks for the info.

Cool thread. Heres a couple of my favorites i did. Lightwave 7.5 with interpolated radiosity and a few area lights.

otacon: i saw these images a few days ago in another thread. nice work indeed. although you have that typical indirect illumination bleeding problem - noticeable in the intersections where the walls meet the ceiling for instance.

anyone know how to get around this problem?

my guess is that the two intersecting surfaces need to be welded rather than just “overlapped” - am i right? id love to know as this is a common problem.

these renders would be 100% if it weren’t for that bleeding.

Andrew W - i checked out that HDRI cheap and nasty tutorial you wrote - very interesting. I might look more into HDRI - i know its a bit of a buzzword at the moment and almost as frowned-upon as, say, lense flares, but the results can really improve an image’s realism - especially when combined with an indirect lighting method and a traditional lighting rig.

RE Radiance: shame its for Unix! I do have access to UNIX boxes at uni, but I dont have time to play on them these days. Looks like an interesting project, too.

Thanks again for the info.

Yeah i had that problem too, but i figured out what causes it. when you use radiosity and global illumination…light will soak through a thin flat surface like a plane. especially at corner and intersections…the way around it is simply to thicken the surface physically. I surround the corners with a cube on the exterior of the model. Kinda like putting silicon around a sink to prevent leaks.

This will prevent light from soaking through. Also you may wanna try simply using cubes to make the walls that way you have two surfaces (both sides of the cube) to filter out the light.

Here’s an example of the first solution i mentioned:

Thanks for the tip. I’ll be sure to do that on my next interior.

Originally posted by mothermachine
Andrew W - i checked out that HDRI cheap and nasty tutorial you wrote - very interesting. I might look more into HDRI - i know its a bit of a buzzword at the moment and almost as frowned-upon as, say, lens flares…

A high dynamic range image has nothing to do with Global Illumination of any sort (which is what I presume you mean is being frowned upon. HDRI maps will improve many elements especially reflections when motion blurred in an old style REYES render, ro rays required. In fact I would be surprised these days if you could find a major production that doesn’t use image based lighting in some way. Often it will be used in conjunction with ambient occlusion which also does not necessarily require any type of raytracing. By the way IBL does not equal Global Illumination either, it’s perfectly possible to create an IBL pipline without firing a single ray in anger. The local illumination model has life in it yet.

Originally posted by mothermachine
[B]RE Radiance: shame its for Unix! I do have access to UNIX boxes at uni, but I dont have time to play on them these days. Looks like an interesting project, too.

Thanks again for the info. [/B]

There is a version for Mac OS X too (I presume under the X11 interface).

I’d spend as much time as you can on Unix boxes at college; all the studios I’ve worked at recently all use Linux, Windows is not flavour of the month at bigger studios. All that time I spent using IRIX machines back in the day has all come full circle. In fact one studio I worked at last year was still using IRIX workstations. Ahh, how the memories came flooding back.

I’ve forgot this picture i did some weeks ago. Simple geometries, but i tryed to learn some lighting though.

Originally posted by mothermachine
I might look more into HDRI - i know its a bit of a buzzword at the moment and almost as frowned-upon as, say, lense flares, but the results can really improve an image’s realism

The only thing that’s getting to be a cliché is that “clay model with soft shadows” look (which was called the “Arnold Renderer Look” a few years ago, but that faded away…) The appeal of the clay look is not that it looks as good as a professional job of shading and lighting, but that it looks better than a badly done job with a few spotlights.

Within the context of a quality-oriented production that isn’t shooting for that monotonous clay look, I don’t think there’s any reason to avoid using HDRI to drive IBL, and HDRI output and compositing as well, if it’s implemented and supported well.

Originally posted by Andrew W
[B]By the way IBL does not equal Global Illumination either, it’s perfectly possible to create an IBL pipline without firing a single ray[B]

That 100% true, but I can see why people associate them: in many programs - let’s say Maya with Mental Ray but no Renderman - the way people do Image Based Lighting is via a Global Illumination solution like Final Gathering in Mental Ray. In some cases, that actually isn’t a bad choice for some users, if you compared FG in MR to some of those painful hacks like GI Joe for Maya…

Trying to reproduce this scene, had mixed reviews about it, but can you guys tell me what you think? I’ve only been rendering and lighting for a couple of months, but I’ve been into photography for quite awhile. Please help me out.

Great job! Couple of things though - it looks like you will need to use a light gobo to cast some varied light/shadows - especially noticeable on the front grey wall. Also, angle the camera better so it’s dead-on rather than at an angle. The only major noticeable differences are that gobo effect (from the clouds) and the fact that some wall edges have chips and impoerfections in them, which you could do with displacements/bumps or fake in photoshop in post.

PS. would consider using an area light to cast that shadow off the cross. Try to render your image the same resolution as the original and put them side-by-side so we can compare better

still a new kid in this 3d stuff…my interest has always been in lighting…here are some of my test render…btw mr jeremy birn, i love your book…

another GI and SSS test render…(the head ref is from michael roger’s joan of arc tutorial at 3dtotal.com)

crazy stuff in there … lighting is definetely the area i love the most, and artworks arround here (’‘alkali’’ is a landscape which i’d like to be inside) make me feel this even stronger …

here are some of the “pieces out of the closet” i like :

same scene with different color moods … the first one is kind of simple (a few spots), the second one was shamefully cpu-intensive.

& finally this one i especially love for it is real time rendered (Direct3D engine) … Lighting in real time is kind of exciting, you get the fastest feedback ever but you have to deal without shadow casting, it’s a good exercise … of course, for a daylight shot, that would be another story

hope you will enjoy,
nice gallery for a so essential topic !

Here is a few of mine.

well both don’t require that much knowledge about lighting but I like them.

Well why not…these are a bit older but I like em. 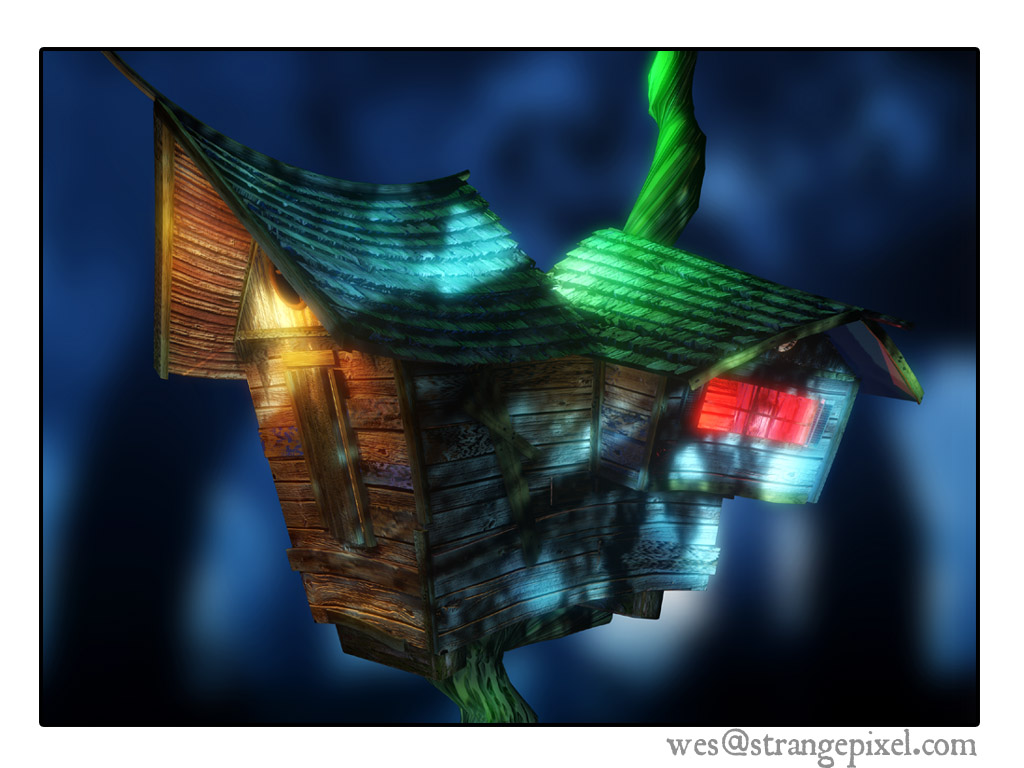 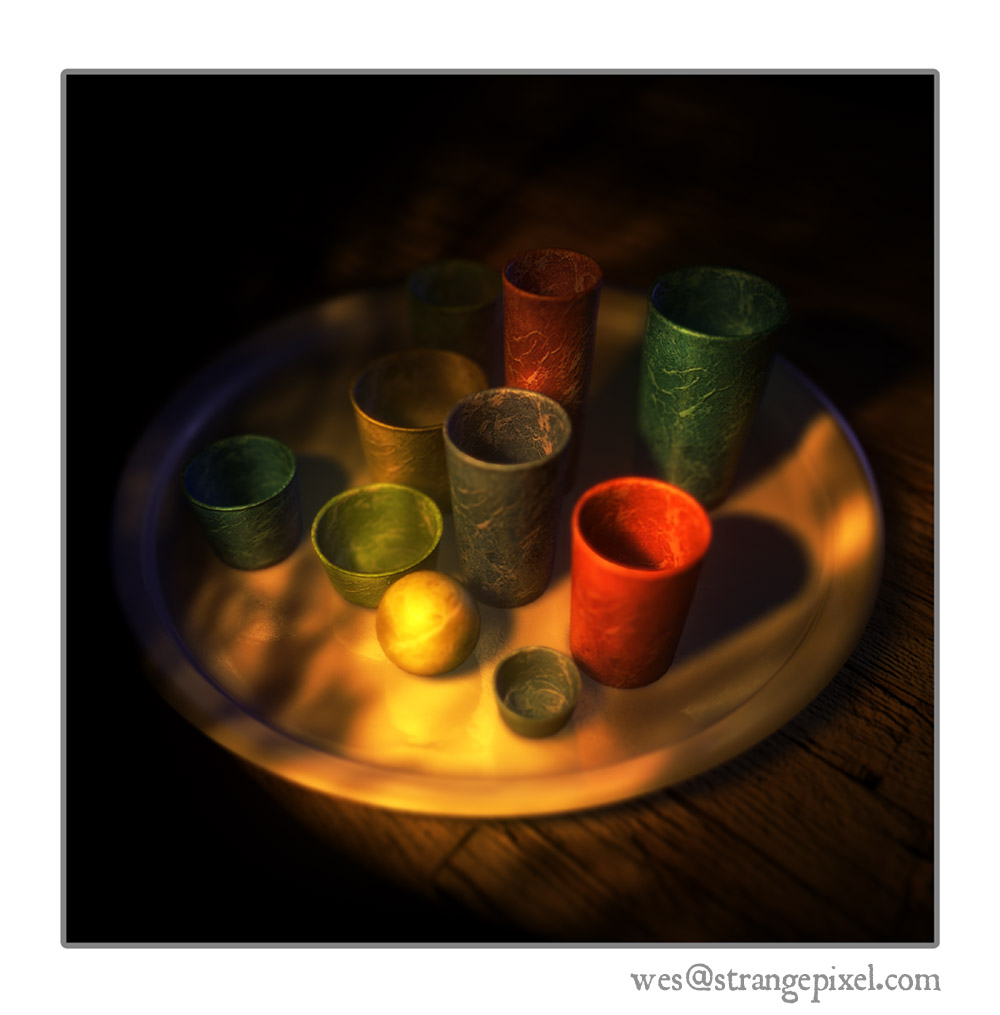 Very nice images for those who posted their early renders!

Here’s a few of my first renders(well serious ones

)…unfortunately in the process of moving to Atlanta to go to school these pics are all I have of the projects :(. That’s why they are in a low resolution. Well here goes:

Did this in '99. Everything was done in 3dsmax2.5. I think doing a render of cigarettes was popular back in the day so I tried to do one too…heh. Well the only post work on this was adding noise to simulate grain and color-correction.

One of my favorites even today…I just like the mood it sets. Also done in '99 and 3dsmax2.5…straight out of the renderer.

If you can’t tell where I got inspiration from then shame on you.

Done around 2000 I think…it pretty much when the QuakeIII demo(beta) came out. Made with 3dsmax3…only post was the lens flare and soft glow around everything.

These is modelled in Infini-D and Hash A:M - then exported to Radiance.
There is only one light - the sun, plus a glowing sky.
Sorry so big