Same here! i imported most files and all were screwed… had to edit myself…to fix faces

Think modeler was too lazy to connect loops, lots of open edges and verts… anyway…

[color=white]“dragonP - I’m a little confused by all the criss-crossing diagonal lines, it looks like diagonal to the right comes from the hole in the wall, grid on the floor comes from somewhere else maybe, diagonal towards the lower left corner I can’t tell where it’s going. Also, there are strange blotches around many of the walls that sometimes look like cookies projected from spotlights. Maybe all of this can be simplified or you don’t need it all?”

Hi thanks Jeremy for your comments, that light on the left side was actually suppose to simulate volumetric light coming from the hole in the wall. It was just a simple spotlight with a gobo attached to it.

I think you are correct in saying that this scene is to complex and draws away from the main focus, there is just too many things going on.

The walls have a lot attached. They have colour mapped with diffuse and bumpiness to them as well this must be causing the strange blotches that you see. I will fix this image up and re post it. Once again thanks for your comments.

Never drop a torch in a dark place

Another one in hands…

karansingh - Sorry you couldn’t get it working. Nice cell phone though!

Tryn - In many programs an area light is just like a point light but with softer shadows, you still need multiple area lights to really get the sky fill to come from every direction.

Dodgeas3d - Looks good! Maybe the first one is a bit too bright in a uniform way, and just bringing down the overall fill could help it. Also, you have a few light leaks, especially in the upper left corner, I think just putting some shadow-casting cubes outside of the room might block that off.

The ones with the flashlights (torches) in them have way too much fill, it almost looks as if they were created for something other than a 2.2 gamma?

If you have a cleaned-up version of the scene that would be useful to other Max users, I’d be happy to host it and distribute it to them. PM me if you need contact information for how to transfer the file.

60WE - Getting better and better! I wonder how it would look if that rocking chair were moved out closer to the center, but stayed really dark, maybe with only a little bit of light around the edges, so it stood out starkly from the bright background?

Thanks Jeremy! yea this was created a little too bright to get all details… maybe you see more then me, couse i got it pretty dark… i already fixed light leaks

Here is max9 file with fixed most of visible geometry

This Image uses total of 4 spotlights, Mental ray volumetric rendering for the fog and GI was used as well. Still needs a lot of work this image, not totally happy with the textures. Went for a very simple and de saturated look, wanted the render to look dark cold and desolate.

Will see if I have time to work on it some more.

V3…Trying to achieve what you suggested Jeremy. I’ve tested a couple of shots with the chair in two different positions, one faceing the camera and the other reversed. For now this is what I chose.
Take care!
60

Hello there !
Here is my update. I fixed the stripe in the center, tweaked the volumetric light and worked a bit on the texture.
I’m going to add more elements to the image, maybe change the perspective or the direction of the light as you suggested. 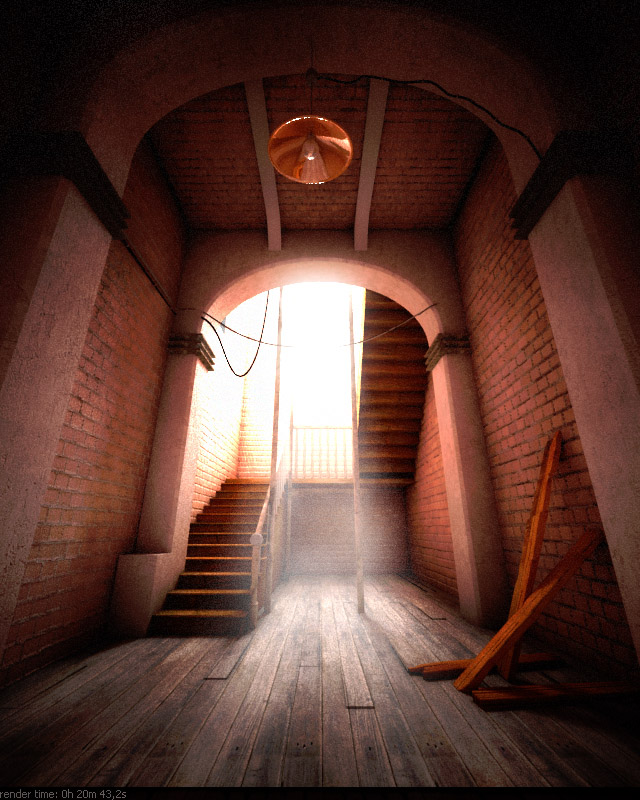 I also did another shot from another angle, for a try. 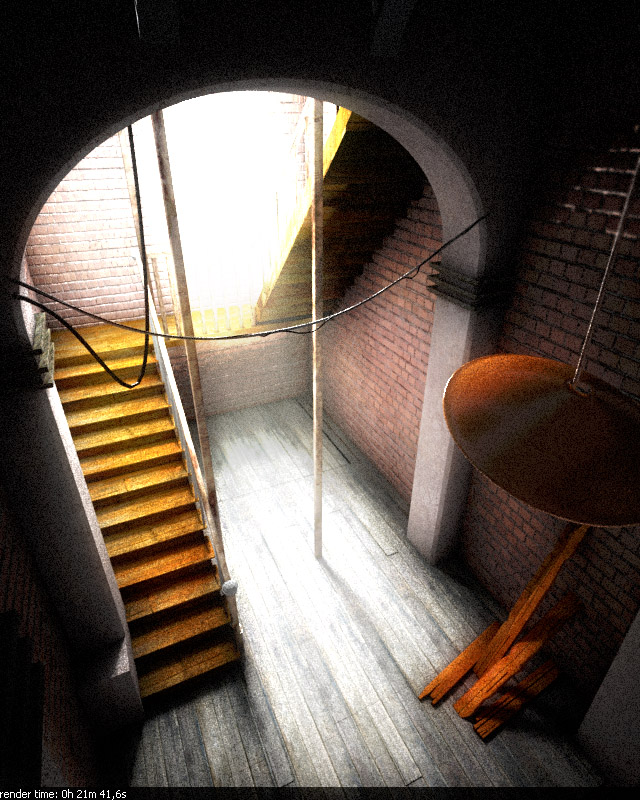 Sorry. Jeremy… I am late for the update… Currently, I am very busy with my job now and have not enough time to focus on this challange… As you siad. I make the place which is under the staircase darker and make the floor brighter… I will try the new challange soon… Thanks…

Hello everyone…this is my try on the scene!

Many thanks to Dan Wade and Jeremy Birn for the scene…perfect for a lighting challege. Some really nice work going on on the challenge…great work everyone!

Nehak, good picture ! I like the ambiance and lights !
Maybe you can choose between the light bulb : on or off…

Yeah Its Without Any Textures Because I’m Really Bad In Texturing .

Wow i was totaly messed up with monitors and photoshop gamma and color profiles… tell me how you see it?

Small update, I pursued the red look in the end. Still need some texturing work, but I redid the sky lights - nifty plugin for C4d which uses HDR to drive point lights attached to a dome.

Hye
Its Real Nice Render I like the texturing most,… like the floor is looking perfectly wet and old as u may be wanted.

It would be more cool if we could see some fog effects as well.

I also like the art effects in your render. anyways i never seen u on cgtalk before are u new here…? Can i see your more work plz.

Its Karan From sparrow I think u know me…!

Nice job, I will Post my try soon on this challenge too.

Tryn - Most of the lighting is nice and soft, so I guess your skylight is working that far. Some of the shadows on the near right wall look a bit sharply defined, maybe the light doesn’t need to fill in so much of that wall, especially higher up on it, if its supposed to come from a window. Actually, overall for light from the windows I’d expect it to hit more of the staircase and less of the wall closer to us. That back window looks like it could be better integrated into the stone wall, too, buy maybe that’s just because the stone wall texture is trying to simulate a fairly complex 3D surface for something represented with a flat color map.

Nehak - Nice job! I think that reflection (it’s really a highlight I guess, the thing that looks like a reflection) on the floor maybe should have slightly longer shadows, like where the board blocks it. I looks very noisey now, but that’s probably just because you are test rendering with very low anti-aliasing settings. I don’t know about the light bulb, maybe it’s just the shader but it looks a little distracting now.

Dodgeas3d - Nice scene! Now it looks like a flashlight (aka torch) in a completely dark room. Maybe it could use a bit more bounce light or glints or reflections or something in the black area, but overall that’s a cool look. I like the little dust in the beam, but maybe it looks a bit hard-edged and could be softened so it matches the anti-aliased graphics instead of looking painted in? The beam of light itself could probably be 1.5x as bright, maybe 2x as bright right near the source?

Liumiao19820823 - Looks better! It still looks very evenly lit, with the ceiling almost as bright as the floor, no real gradient shifting from bright to dark other than the occlusion at the corners.

viclio - Nice images! I guess I like the high-angle view best, looking down on the scene. The colors of the wood (some wood very saturated orange, other wood cool and desaturated) doesn’t all look believable to me. Especially because they look like similar shaders otherwise, no difference in varnish or age or anything, maybe you can tweak the different colors?

60WE - Great progress! I guess the chair doesn’t read or pop-out yet, it isn’t as solid and dark as the ball, and the bottom is cropped off.

Here is an update. The chair looks darker in this shot.
Cheers!