Well, it’s been a while since I’ve done a render for one of the Lighting Challenges, anyway here’s my Candle scene:

I just did this one overnight, still not happy with the candle holders’ material or some of the picture frame but I’m happy with it overall. I tried to light in a way where it is difficult to tell if it’s set in the early hours of the morning or at night.

Some great renders in this thread, keep up the good work. Love what you have done with your scene, GaazMaster.

Being impressed by the quality of the works …It’s my first challenge in CGtalk.

I learned a lot here… thank’s a lot jeremy, and courage for those still working on it…

GaazMaster, I really like your originality! The one half in and half out of the picture is my favourite!

hi guys, there is my contribution to this mini challenge, it’s not yet finished

Luc-fr: Your image it´s pretty good. But I think it has many Japanese characters dirtying the scene. Maybe the vase doesnt need the characters. The shaders of candle and sword are very nice.

And the post-production: I used occlusion pass, the smoke was made with particle flow. For color grading I used the same image but in grayscale overlapped with Soft Light transfer mode to emulate ENR process (Technicolors proprietary ENR process is a color-positive developing technique that utilizes an additional black and white developing bath inserted at an appropriate stage of a prints processing to retain silver), in the first and second image I used 50 % of effect but in the last one I used 100%.

the last one for me.

i must restart my work :shrug:

yohann - Great work & great break-down! I like how you got the vase looking in the 3rd one there (the one without the bright specular highlight) although maybe you need to put a little of the light back behind it so it can read. I’d say all you need to do is zoom out a bit (so you don’t crop off the tops of the candle flames) and make the picture glass less reflective.

monoclon - That’s great! The candles look good, maybe just the translucency effect in the wax could be blended into a softer gradient, and the shadows they cast on the table could be softer. For the picture, maybe you could move that reflection on the glass sideways so that her face falls in a dark part instead of a light part?

HamburgerTrain - I raelly like the look you have on the vase and the dusty table-top, that’s great. Maybe just the bump on the picture frame and the SSS effect on the candle wax need to be turned down, and I only say turn the translucency down because the scene seems to be lit largely by fill light not the candles. The candle holders are almost there, maybe less reflection more occlusion from the table.

GaazMaster - Brilliant stuff! I wouldn’t be surprised if your work appeared on the front page one of these days!

JCBug - Terrific! I guess the only thing I think about it is that if you squint some of the candles come out looking brighter than their flames.

Luc-fr - I love it! Your scene has a really solid, tangible feeling, as if we were looking at real objects. If you’re looking for improvements, maybe the picture could be matted in the picture frame to look more natural, and some of the shadows could be a little softer. Really top-notch work there!

lazzhar - I agree, you French snobs shouldn’t show-off in ways that make the rest of us look bad! (I’m kidding, of course, that’s a great scene and a terrific animation. In terms of the fluid sim flames, they seem as if they are on a different, larger scale somehow, like larger flames coming out of a flame thrower instead of simple, smooth candle flames?)

mudasirmulla - Welcome! That’s a good start. Going forwards, maybe some places (tops of the candles, plate) are going very bright, the table could use more variation from light to dark, and the shadows could be much softer?

Silvia - Awsome! I love how you’re handling the candle flames, with the little transparent area around the wick like you would really see.

wilhelm - Those are great! The flames have really nice color and transparency to them, that’s terrific. The smoke looks really nice. The “heat ripple” doesn’t really work for me, maybe it could be much smoother and more subtle? Also, the background with the shelves looks strange, so bright in the reflection, dark in the background, without causing a similar lighting shift on the set… Maybe you could put something else there like the screen again? The mirror sortof works, maybe if you put a candle closer to it it would be more obvious?

Thank’s jeremy for your C&C and i’ll apply in a new render :love:

So, before your suggestions, I return to the original position scene and I try to reproduce a camera picture but not a humain view. So I put on my floor 3 candles, I photographie these candles for reprocuce this picture.
And this is my work.

And I could see a photo grain on. And I just apply this filter in Photoshop to try it, just for fun

PS: I’m really sorry for my poor english :sad: but i try …

Hey. thisi is my second work.
My issue is how to put my individuality into the scene.
(My scene look normal most of times… I know T__–)
I think the individuality is as important as goot lighting in the scene.

Lazzhar, I love your GIF version. So nice.

So here it is!
Its my very first Lighting Challenge here and also my first try in lighting these Scene.
Im using Cinema 4D and I did the postwork in Photoshop.
I used 5 Arealights for the Candles, 2 Arealights acting as fill lights, 1 backlight behind the paravent and a plane with a Light Emitter for the highlites so far. I also used Global Illumination.

For postwork I rendered a multipass Image and did some Colorcorrection and add a littlebit bloom.

For the next phases of my work Im thinking about adding some smoke effects and some extra details.

Nice, maybe before the next version you could just see if you can soften that reflection on the vase and do a little more polygon smoothing. That’s looking really great!

Jeremy, Your are right, thanks a lot for your analysis,
I’ve changed the wax candles bright…

to all !!! very good images 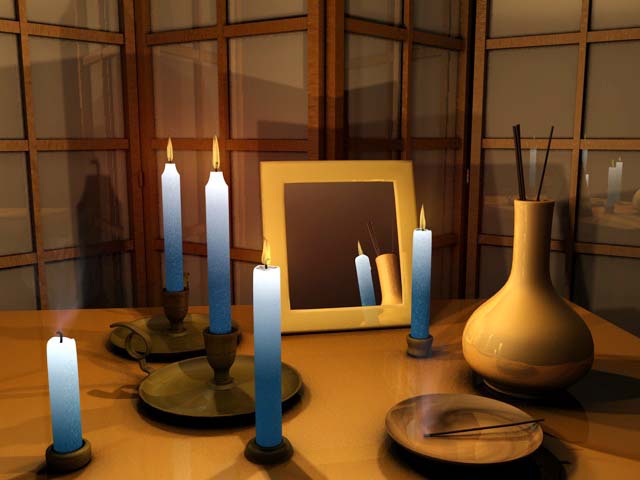 Ok, here is the second version of my attempt. Not rendered with shadows yet, I’ll do that in my final render :). All crits welcome.

Polyphemus - Nice! See if the light on the candles can be smoothed out a bit, so the very top isn’t quite that bright, but it spreads a little further down.

corack - Nice image, great breakdown! Those “light-emitting planes” (or whatever appears in reflections) seem to make the bases of the candle holders so bright, but they don’t brighten the picture frame at all, it looks almost black. Maybe you could even that kind of thing out?

edjkodiak - Good start. Work on softer more subtle shadows and reducing the translucency in the wax.

JCBug - Looking good! I like how the reflection in the plate makes a Yin Yang symbol. I don’t know why the background is so much more grainy than the foreground, I can’t tell if it’s the occlusion or DOF or something else.

corack - That’s great! Really solid already. It might be good to see the candles illuminate more of the picture frame and table, and also to see a little occlusion on the bottom of the vase and plate and candle-holders so they don’t stay totally bright right near where they touch the table.

monoclon - Your versions look good. I think the really focused reflections on the vase and picture are a bit distracting, if you could find a way to soften and tone them down it might fit with the scene better. (The scene’s lighting doesn’t look as if it were lit by windows as shown in the reflections.)

Luc-fr - All of your renders are great. One more thing I could mention: the short candle with the dripping wax seems to have a lot of rim-light along the edges of the wax drips, they wouldn’t really be there on the front of the candle.

here is the update :

Hi everyone again,
Jeremy, I do all changes was you talk about, follow the image below.

thanks I learn so much things in this time, how I can do the contrast in scene directly in maya, adjust the raytracing and how to control the particles and their attributes, how appearence and style.

the render time is 2h 15m, in mentalRay

just a little update of my work. see you guys.