Houdini 14 are able to open/import it.

It’s working for me. Took a few attempts at loading it though. After it loaded, I locked the node and not had anymore issues.

Okay so here is the second pass of my render. This was a fun challenge and it gave me a chance to dive into Blender a little more. 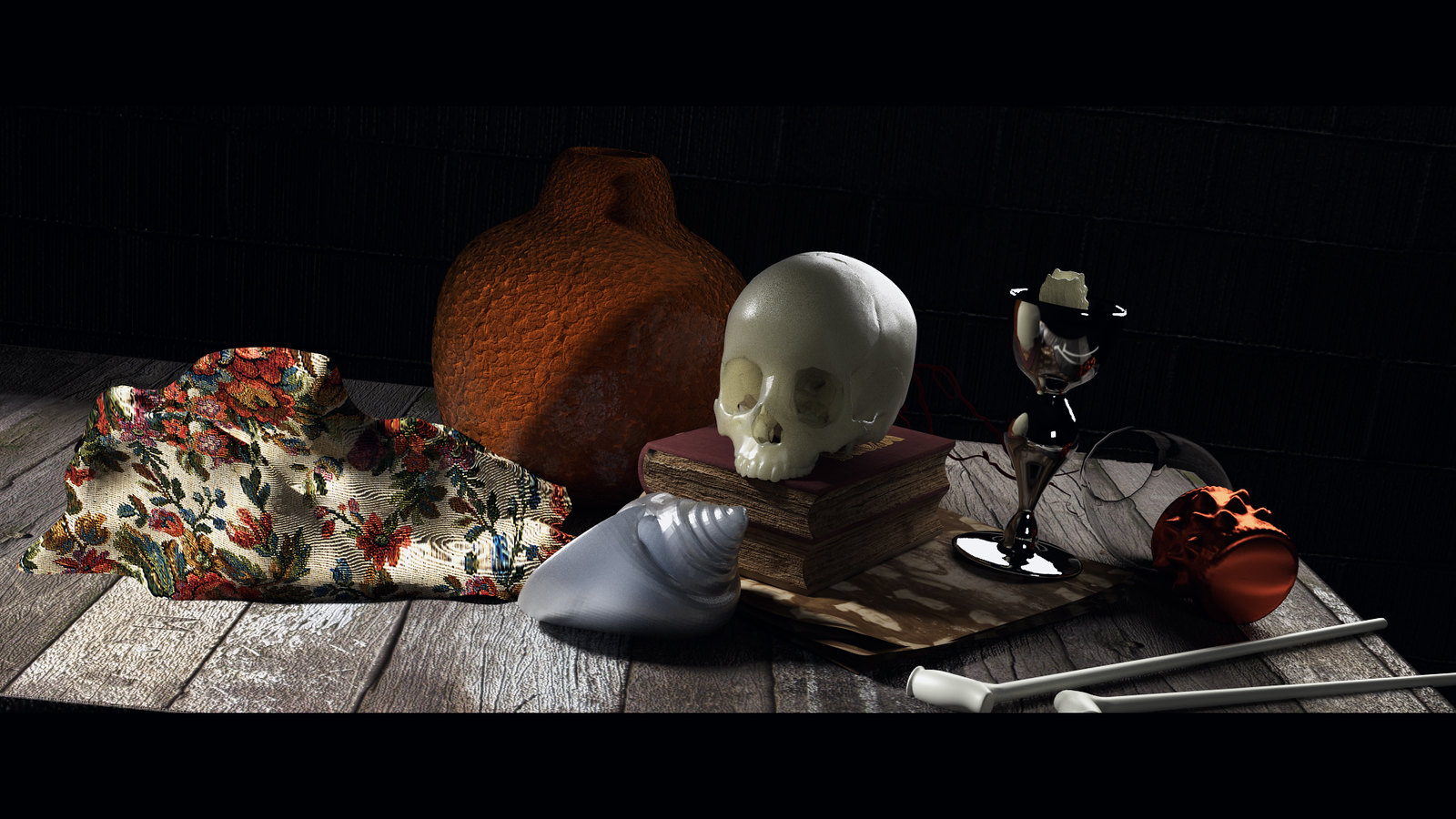 Here is my lighting setup. Its just a simple 3 light rig. 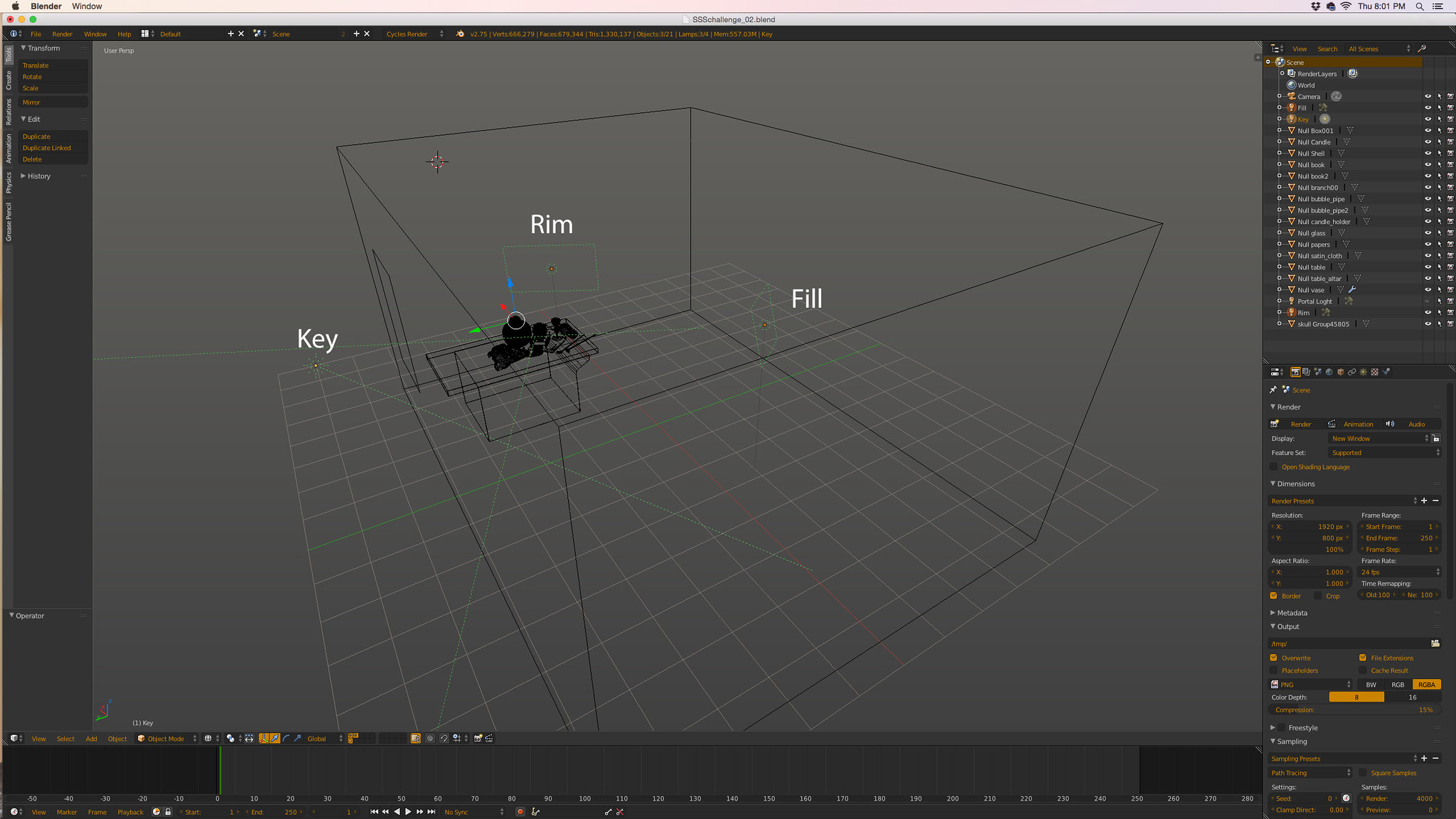 Lastly I thought I would share the Wax shader that I used. 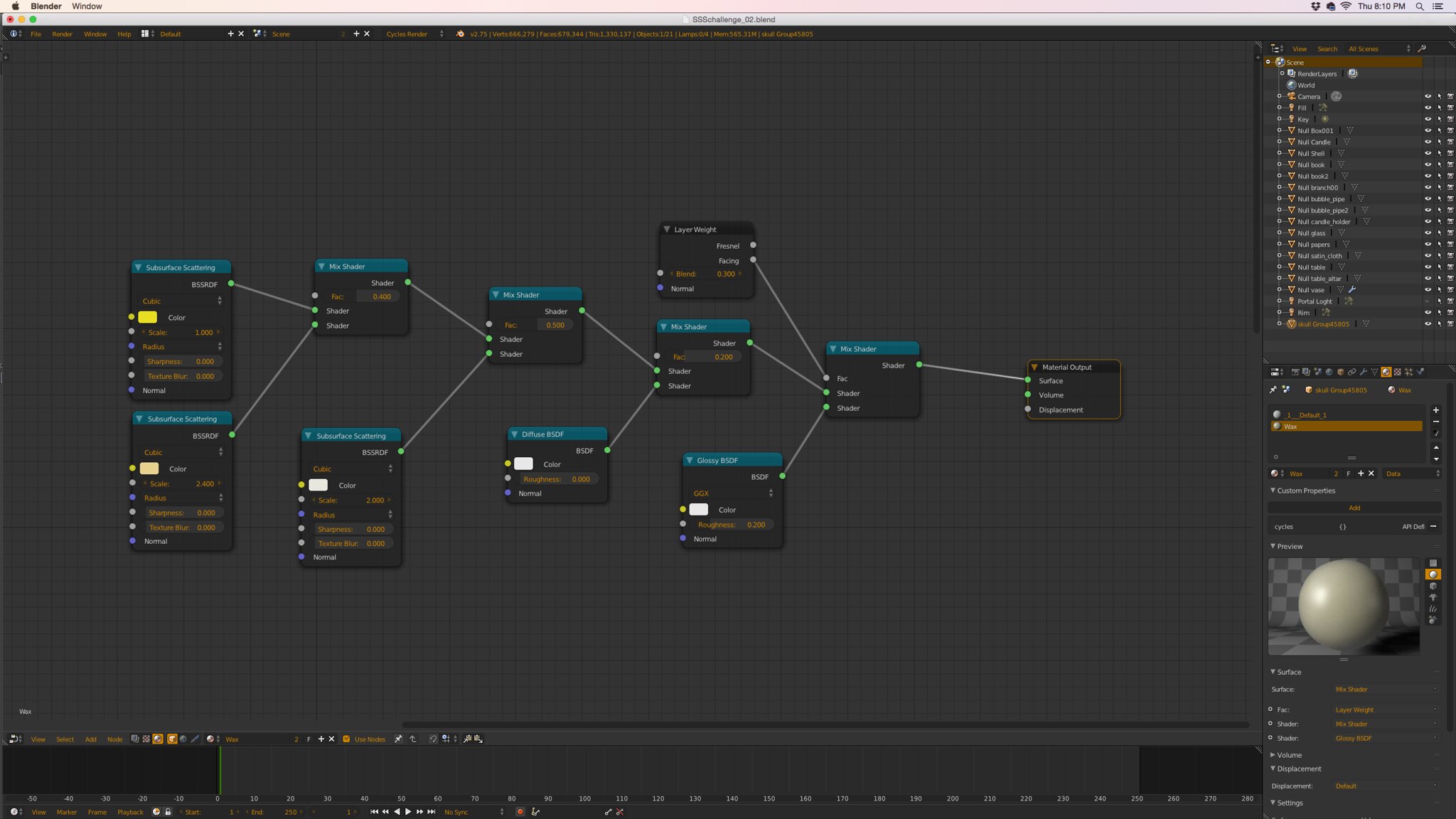 @IgnisFerroque: still its not working in maya for me, but I import it in 3dmax and then export it as a .obj from there.

Links of .ma and .obj for those who can not access through posted Obj.

Hope it will work

I decided to change the lighting I had going. I wanted something more baroque to fit the scene better. Its working alright so far. Most of the materials are where I want them. Just need to refine the wood texture a bit. I don’t know what to do with the cloth object, I might just replace it with something else entirely. I feel like the scene needs flowers… but they are just a huge pain in the ass to model and render… Well tried adding a volumetric type effect in Houdini using volume primitives instead of the atmosphere shader method witch is very computationally heavy. Well the volume idea works, however the end product for me is a no go. The setup was a box in direct path of a spotlight, stretching through the geometry on the table. Converting to a volume via an Isooffset node. Then feathering the edges of the volume with a volume feather node. That ran into a volumeVOP where I subtracted some values from the density field (I could do this in a billowysmoke shader, but this way gives immediate viewport updates where the shader does not: Rendering is required). After that the smaller tweaks in density and shadow density was done in the smoke shader.

As I said I don’t paticulary like the end result. Would be fine for an outdoor scene, but just doesnt work too well here. The other render without the volumetrics is a lot better, but I still think the scene is missing some sort of atmposhere as it seems a little too neat and flat to me.

Any suggestions towards this would be greatly appreciated.

Nice challenge. Already nice entries being posted. I want to jump in but have a few questions. How does one go about UV’ing high poly meshes like the skull? It would be great if anyone could share their workflow. I use maya but a generic workflow will suffice and I could apply the principles here.

Unless you are going to use photo/painted texture maps, you don’t really need to uv it. If you use the hypershade and create a shader using the nodes already built into Maya, it will work just fine.
In my render the only uv mapping is the tapestry on the wall, and the table top, book cover and greek urn. All are basic planar and cylidrical mapping using a uv projection tools. I havn’t actually hand mapped anything.

I don’t use Maya so I don’t really know the workflow too well. Others who use it may give you better advice than I can.

Sure. For starters I am using Maya and Vray so obviously this will somewhat be specific to those programs. First I gave it a very quick and dirty cylindrical unwrap so I could get some texture detail on it. I grabbed a map of orange/beige marble from CG textures (This one ). Then I used a Vray fastSSS shader. In terms of the shader settings I use the marble map in the diffuse and the sub surface colour map. I gave it a fair bit of specularity and glossiness (.95 and .80) and turned on raytraced reflections. It took some re-rendering and tweaking values to get there, but that’s pretty much it.

Thanks Eric-Harvey for sharing your shell material settings.
I think I need to play with it some more. still learning more about SSS material from vray

Eric-Harvey. Thank you much appreciated.

@metafus: Nice dark foreboding scene there. The shell SSS is a bit strong though. not sure what attribute controls it in VRay, but from my package the intensity would be too strong. The subsurface should be quite slight unless there was a very bright light situated inside. I assume the light penetrating the surface is from the ones inside the skull?

Here is my first try on Corona render:

@ragupasta yes leaning towards a darker feeling with the image.
I added more candles to give it more that feeling. I adjusted the
lights so they are not blown out which is what happening in the skull sockets.
I am still thinking on what to do with the books to create more variations.

beautiful challenge…couldn’t resist. First try mainly for light and basic material.
No textures yet. Wanted to try to get somewhere close to Barry Lyndon.
http://www.diptyqueparis-memento.com/en/candles-stories-barry-lyndon/
Which is quite hard to achieve

Tons of awesome work here guys keep it up. Giorgio had let me test out this scene a while ago and this is what I came up with. I dont have any WIPs unfortunately. All rendered in Mental ray. I seem to always go back and forth between render engines. I think im going to give this one another shot in Renderman im really blown away by how great that renderer is. Thanks guys

Edit: Found my scene and lighting setup. the two other spot lights were linked to a couple objects that just needed a bit more illumination. Pretty simple with a bounce card below. Used a heavy amount of Global illumination to get the bounce lighting.

[left]Hi everyone,
Good challenge and great work so far by everyone, I had to have ago at this one! Here’s my first WiP image rendered in Corona out of Max. A small bit of post in PS. Hope you like it.
Andy Hey all, pretty awesome renders here so far! Here’s my go at the scene.
Fairly low-res and noisy in some parts for now but I’ll run out a better quality one soon. Using maya and mentalray, and glow done in post.
Let me know what you think, cheers!