Hello to all !First of all I would like to say that I’m very happy with this challenge ! I really love the work you’ve posted ! Second thing we are waiting for new models that will come soon so Don’t worry for now the deadline is a bit delayed still 15 days to go !
So Fex it’s really a great work, I only would chance a bit the shaders. The brick look a bit innatural (it’s a stone wall) and also the color of the canvas window. You can try also to make a caustic pass to see how it looks with a small boost
@ Lsayan, can you post a light breaktrought to better study your image ?
@kosincg. It seems you didn’t go for the realistic path, and that’s good. probably I will make the wall in front a little less lighted in order to focus more on the bottle.Also check the UV of the windows. it seems there is some kind of misplacement
@ dessax. The glass is wonderful and the other texture too. So also even if I love the idea of the cobweb I think that your image will be better without it because even if the plugin made a wonderful job, actually it doesn’t resemble a real cobweb in a window corner which in my opinion is more like this http://www.photoready.co.uk/objects/images/welcome-to-my-parlour.jpg. So pls make a version also without

@asymmetry KEEP GOING YOU HAVE TIME

@gamerguy02 . the border of the bottle looks a bit odd and also some of the bottles seems to float, also you should check the index of refraction of the glass since in my opinion it probably can be a bit too low (too transparent). Even if I personally don’t like the murder them, in order to be more incisive I think you should desaturate all the colors except for the blood. The blue reflection and the purple reflection looks a bit destracting and also there is not a clear focus in the scene (what’s the most important object ? the background with the blood shadow, the broken bottle in the center, the flat bottle in front ?)

@ r-e-w. Wonderful work on the shaders but again I have to say that I would like to see a version without cobwebs

@Mattgdx, why don’t you try also a fake frost glass ? you can disable caustics and internal reflection and so your rendertime should slow a bit (just an idea, i should really try it but theoretycally I think you can fake in your render the “frost” effect) or you can go for the very dirt bottle route or for the ceramic route keep posting

then I have a few question. What actually are the small “spot” on the bottles. They don’t look too much as dust, neither reflections. Also I think that the material

@Preston, great image, I would like to see the version with dust. Also in my monitor it looks a bit overexposed. Which render are you using ?

@Shariesp you still have time for other posts

@worker if you go for the PBR approach probably yes. My only doubt is about caustics, I don’t know if they are still visible in such a setup like in this photo http://2.bp.blogspot.com/_P9E_gJjdyag/TTPyIbTT8AI/AAAAAAAADHs/kTCfcSIQEas/s1600/GlassBottles3848.jpg

@JNevalainen I will be very very happy to see also another angle. I really like the idea for shaders and materials. Can you try also an image with less distortion… and btw The model is not by Clint Rodriguez :)))

@Nitesh, Lovely color, really wonderful. I will add a bit of noise to the bottles and also change a bit the shader of the windows it looks a bit strange. A wood frame or a more uniform rust probably could help

@macasdez try to contrast a bit more the image the mood of the image is very intersing, pls keep going

@ThePriest. The overall image looks quite “muddy” so I wonder why the bottles still look clean and also the frame of the window But I really like the steam and also the contrast and color composition

! Keep going if you have time

to all you still have time keep going and post variations

Thanks man, yeah i mean to do it, its just that im busy at work. i will hopefully get a new go at it soon.

I agree it has been a great challenge.

@Shariesp
Nice renders. Thanks for sharing your lighting setup. So this is all direct lighting and no indirect lighting? Also can you post some information on how you did the wall shader?

Thank you!. So basically for my lighting set up I didnt rely too much on the bounce light from the Key light, I had to up the samples too much for the dark corners and still had noise. So just added some fill lights to fake the indirect lighting.
For the wall is a simple shader with a diffuse, bump and spec. Check out for references it helps a lot.

Thanks for the feedback jojo, will make some adjustments on the wall. Yeah, I did not take the realistic path to sharpen my creative ability… I don’t want to lose it :D. Though, I am planning to have a realistic render of this scene after finishing this version.

Thanks a lot.
Oliver M.

Thanks for your feedback.

I will try to render something else (I have another concept in mind, but maybe time will be the ennemy

Thanx for your feedback Jojo , i will take care of these mistakes next time , also i would do some homework on colors , this is first time i have been given feedback , thanx alot .

@jojo Thanks for the feedback, much appreciated! Not quite sure what you meant by less distortion but I’ll try another angle and we’ll see how it goes

Also about the credits, my bad, I clearly misunderstood the request to credit Clint.

Thanks for taking a look at my work. I’ll post a breakdown soon.

@ Lsayan, can you post a light breaktrought to better study your image ?

this is a new trial. It’s not very beautifull, but I really have fun to do it 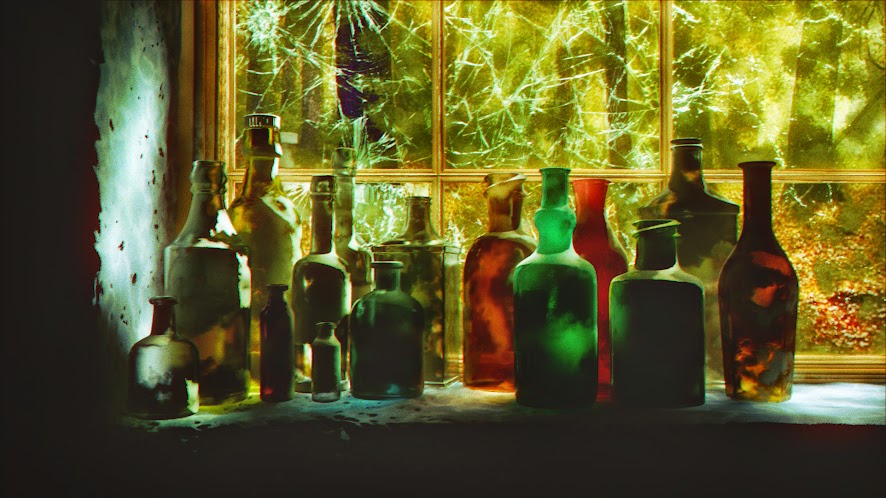 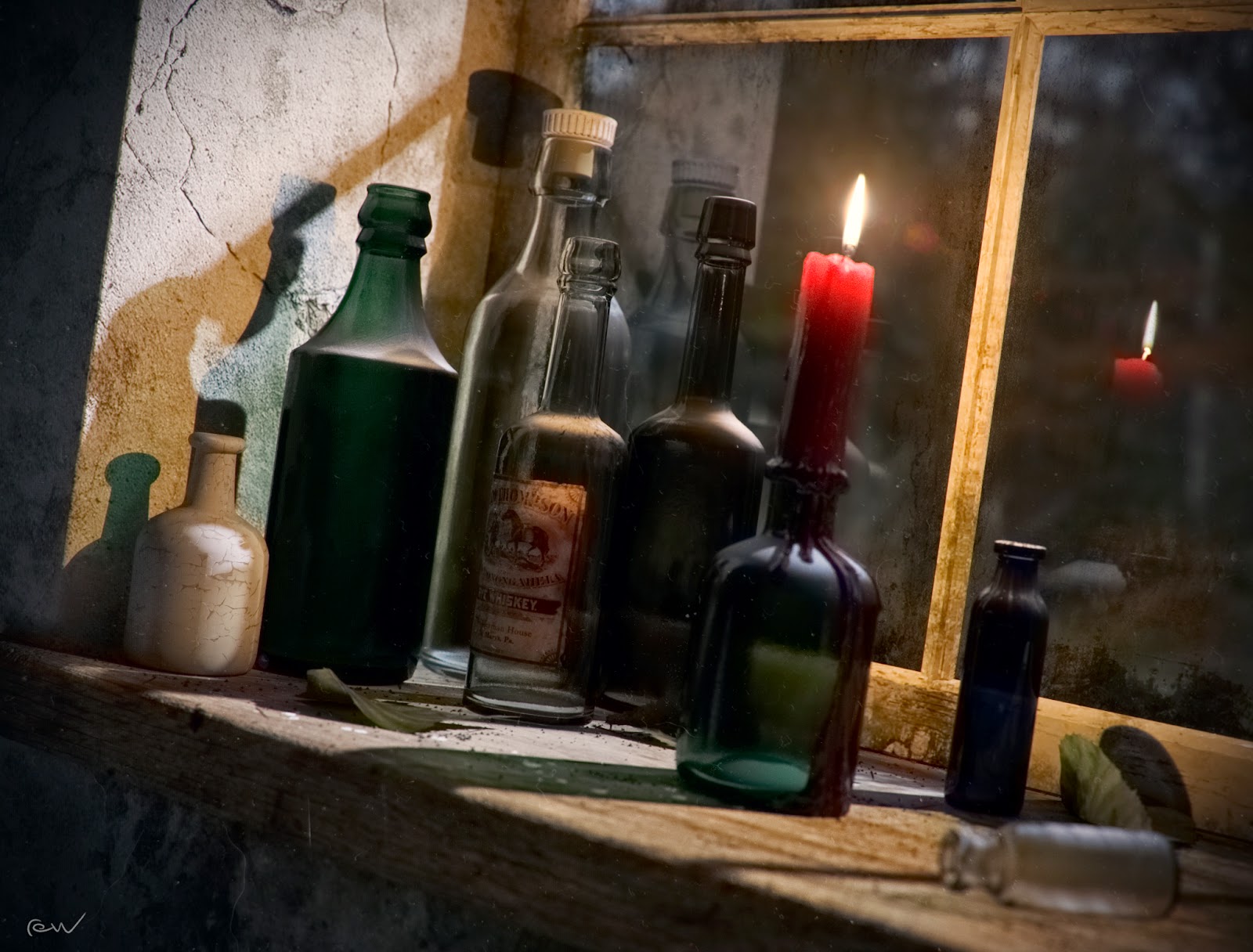 Here is my go at the bottle challenge. I’m fairly new to CG and the was great experience. Thank you for putting this together. I would love to get some feedback. A couple issues came that maybe you more veteran artist can help with.

here is also a breakdown of my image

Here is my entry.

The newer versions of Photoshop usually include a Lens Blur filter utility. The utility typically presents a window where you can specify the layer that contains the Z-Depth information and various camera elements.

Make sure to include the Z-Depth Render Element in VRay and if you’re using OpenEXR, you may need to use the fNord Software OpenEXR plugin as the native Photoshop version doesn’t separate the EXR channels. Alternatively, you can render the various passes to separate files.

Here’s a few tutorials that might help get you on your way:

A few tricks to troubleshooting Reflection/Refraction bounce issues is to set the respective Exit Colors to some noticeable (aka obscene) color. This would help determine if the number of bounces (default usually 5) need to be increased.

In your Render Settings,

Ensure that the necessary Reflection/Refractions settings have been enabled and that bounce cut-offs aren’t set too low. If they are, the render will exit prematurely.

Here are some of my render layers for the bottle lighting challenge. This time I rendered them out a bit bigger to see some of the details.