Now I’ve worked out the legs, and tightened up the gloves. The proportions felt a bit funny, and upon inspecting how well tailored the suit was, it became evident that he had a lot of wiggle room in the gloves.

The legs are not necessarily meant to draw a lot of focus, which is why I left them pretty basic. Also gives a place to rest, and I believe they’ll fit in better with the character once the outer-wordly plate materials are put in place. I’d love to catch some feedback on them though. If they feel way too basic, I can perhaps add a little flare, but when I tried a pattern design similar to the vambrace on the greaves, it simply looked strange.

Now it’s time to clean up the helmet, redo parts of the sword belt, add a sheath for a dagger and work on the primary weapon!

Woo!! The armor is excellent and the model as well. I can’t wait to see the finish, but im loving more the progress. Its like watching a movie to me.

I appreciate the kind words Whym!

The HP helm is more or less done, and I’m currently working on the primary weapon. You’ll all get another update once I have the weapon(s) in in a more presentante state!

The helmet just needed a bit of clean-up, and was worked through fairly quickly. Probably just a few hours. Still has a few open surfaces, but I’m considering filling them with some knightly masking patterns.

The sword is more or less a space Montante / Spadone / Bidenhänder. The way I find myself working these things out is by firstly modeling a few iterations of the historcal items. Then I’ll browse pinterest and google for sci-fi designs. Once I find something I like, I’ll try and incorporate it into the historical model, and jump around, exploring shapes.

So now I’m fairly happy with the sci-fi-ness of the sword. It’s got a little of magnetism / metal manipulation, and laser / energy stuff attached to it. Now It’s just time to refine sharpness, and take it from clean blobs into something more interesting.

I suppose the final thing is to fix the swordbelt for his katzbalger, and space-rondell-dagger.

A part of me also considers giving him a poleaxe, since that’s more of a knight’s weapon than a greatsword is, but we’ll see. I’m pretty fond of the big sword.

It’s a bit silent from my part primarily because I’m busy researching stuff for my materials, and learning how to properly set up various materials in UE4.

There was also some concepting done for his hair / head tendrils, but in the end I decided to keep him bald and throw a cowl ontop of it. I felt that if I went for braided hair, I was going dangerously close into Protoss territory, and with partially slimy, and partially translucent tendrils for hair I knew that was going to require more headaches in the shader creation, in addition to having to resculpt the head in order to connect them.

I’ve also been creating some etchings, and capes. The image(s) are a bit low in quality, but that’s because the scene is currently at 90mil polygons, and my comp runs out of memory and decides not to collaborate if I try and BPR the scene.

Thank you! Chech out Daniel Hopfer if you want to find the guy whose work I borrowed for my alphas. He’s been dead for about 500 years so I hope he won’t sue.

Yo peeps. It’s finally time to begin texturing my alien knight, and I was hoping to collect some general feedback. So far I’ve only used the “Shiny brushed steel”, and “Brass” presets in Quixel. Followed by some oil in the cavities. So if you have suggestions for an entirely different metal process, I’d love to hear it!

The entire model currently sits at just below 14k tris.

The Leather is also default, with a base color and a lighter/desaturated color masked to the edges.

The blue wavy stuff and the crystals will primarily be worked and lit in UE4. I intend to play around with some water/liquid materials and emissive light. So those can be disregarded for now.

The gloves will need to be fixed a little, since their AO seems to have gone awry. (1 bright spot, with the rest being too dark).

Lastly the hood doesn’t seem to be workable at all. So I’ll have to figure out why. Its UVs are imported, but no texture sticks to it.

I’ll also attach my primary armor for colour reference. It’s from Henry VIIII, and any pointers to receiving the same deep blue in a PBR-correct fashion in UE4 would be great!

Hopefully the final update from the texuring phase.

After some overall tweaks on my workflow and material selections, I hooked up with my good friend whose brainbank of knowledge regarding materials and metals exceed mine. My old metals didn’t really make sense color-wise, so we switched it up and mimicked the colour of 650F heat tempered metals. The sort of green / tealish was picked because it was most alike my previous references.

I also worked on the leathers, and the ornamental designs on the armor. Rather than having the top of the decorations be more rough/less shiny, I reversed it, in order to mimic the oxidation which would occur by pouring acid / etching into metal.

The ornamental parts also received a whiter/ more neutral metal. In order to break up the greeness, and to emphaise the black oxidation, thus creating more contrast.

I’ll probably swap the golds to brass, since they are a sturdier metal and thus make more sense on armor. Following this I’ll work on the water material shaders that will replace the blue materials in the image.

I feel like I’m reaching an end point here.

The renders are real time in ue4. Those who have followed along knows most of what I have to say about the project and the process. Any feedback is appreciated.

Time to revive the thread with a new project!

I’m still not entirely sure whether I should continue on the same thread, or start a new one, but in the name of not flooding the forum with threads I’ll go here.

This time the topic is a human traveling / questing mercenary. During the concepting phase I’m using reference from historical images, The witcher 3, Dark Souls, Kekai Kotaki and For Honor. This means I am currently more concerned about finding shapes and cohesive designs, and for that I dart around between art from the 3 games mentioned.

The images are in chronological order of design. So the first piece got hammered quite hard from a friend for being significantly too detailed for this phase on the process. Which is why the later pieces are significantly simpler. I also gradually refined the anatomy down the pipe. So the later entries will have better proportions.

My current thought process is to provide her with a water bottle, a rondell dagger, a scabbard and a bag containing a cup and a spoon. All these items tell basic stories of what a traveling mercenary may very well carry with her during travels. She also holds 2 satchels that currently serve as misc-bags, and they are more there to add shapes, rather than tell a significant story.

I’ll go about and create a few more designs in the coming days, but I figured a thread might be good in order to attract input and feedback early in the process. 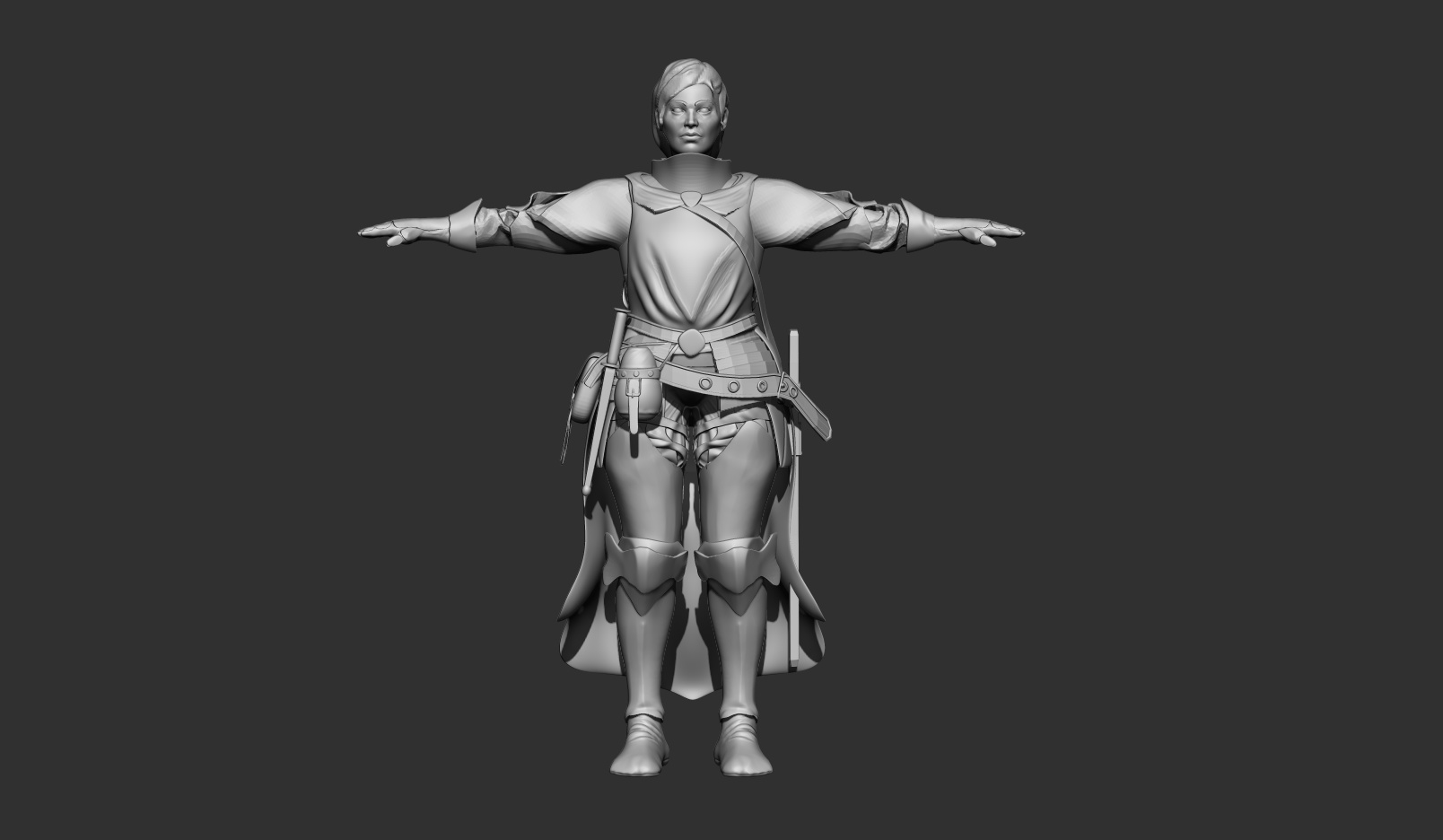 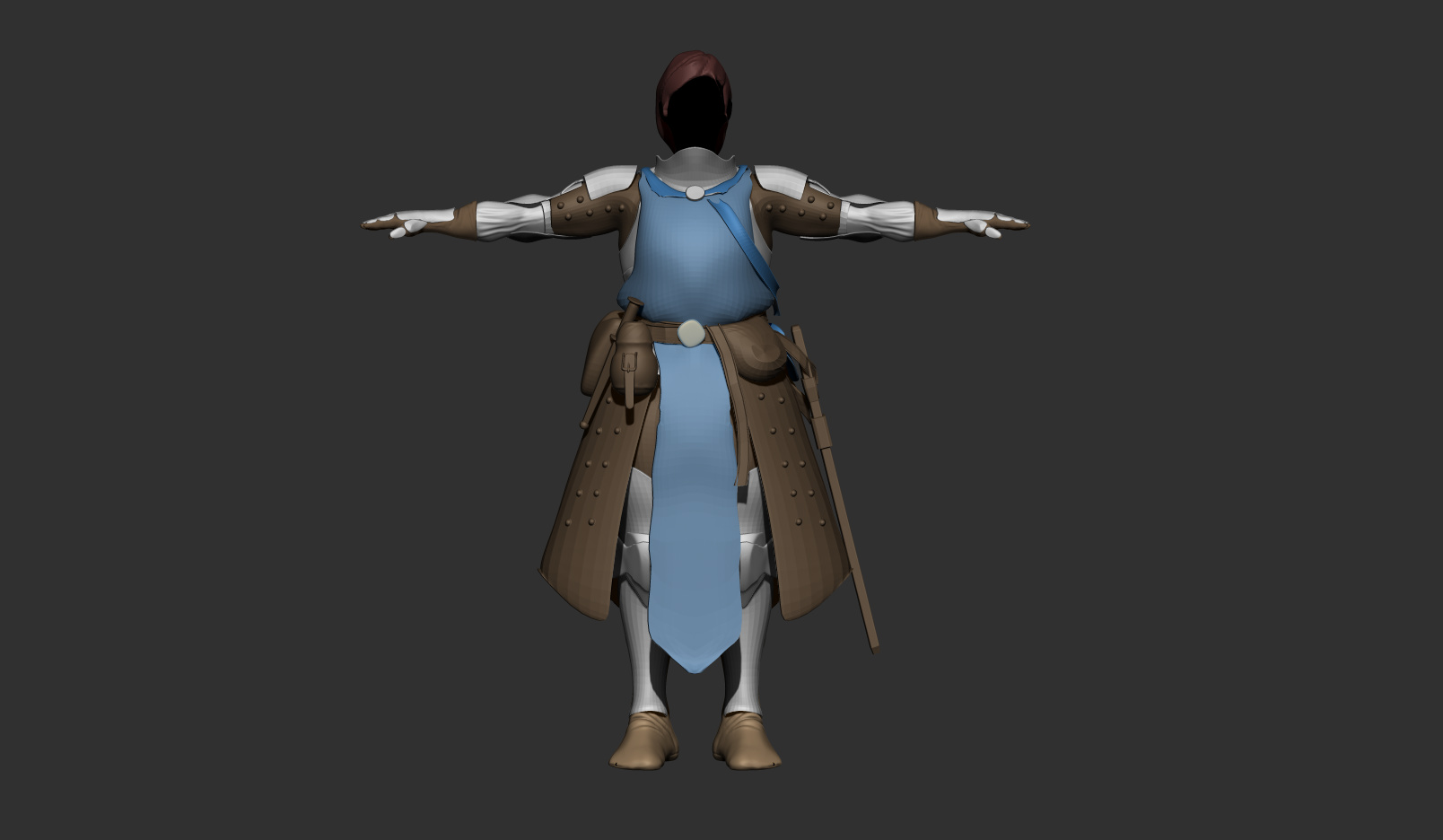 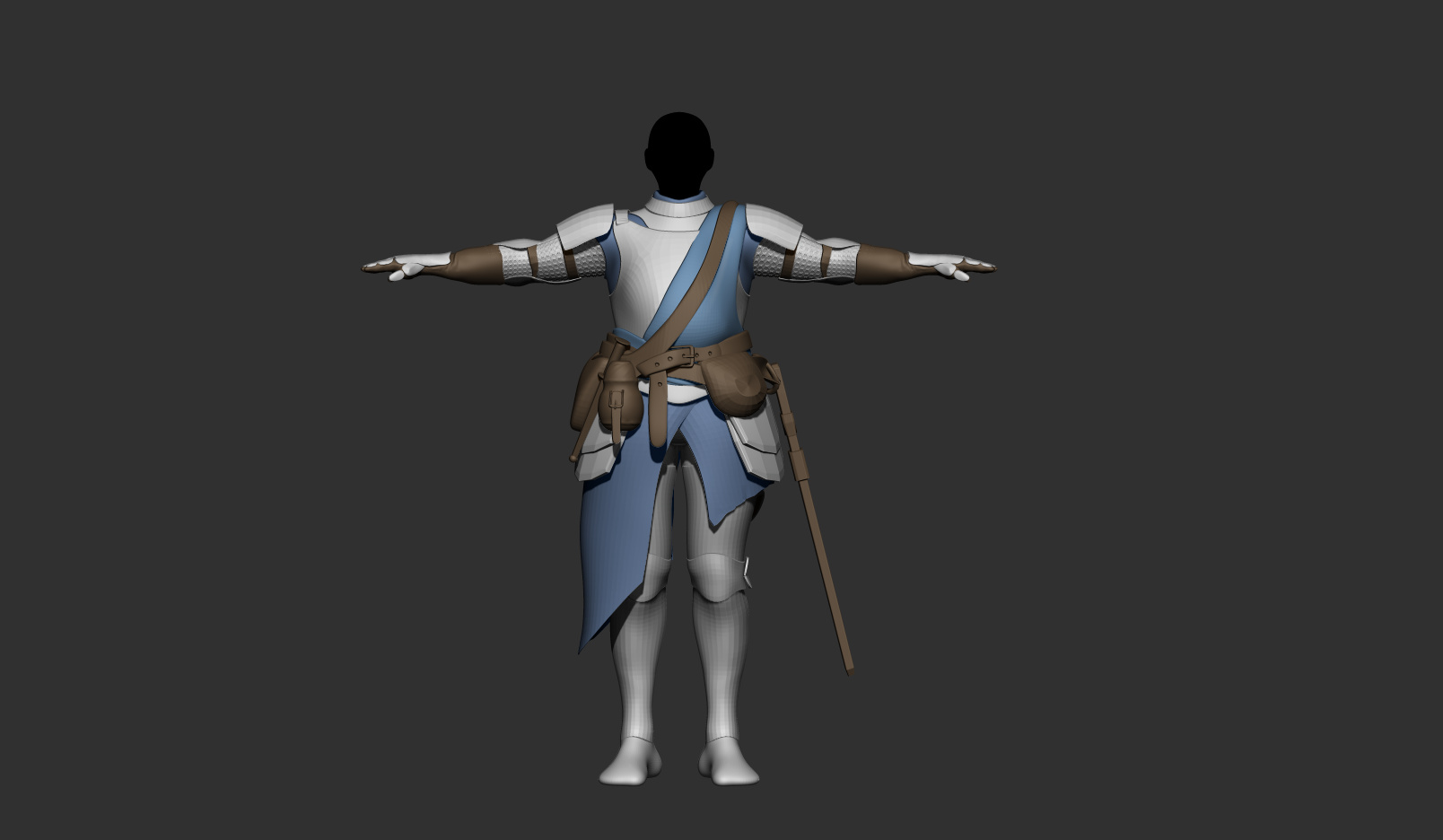 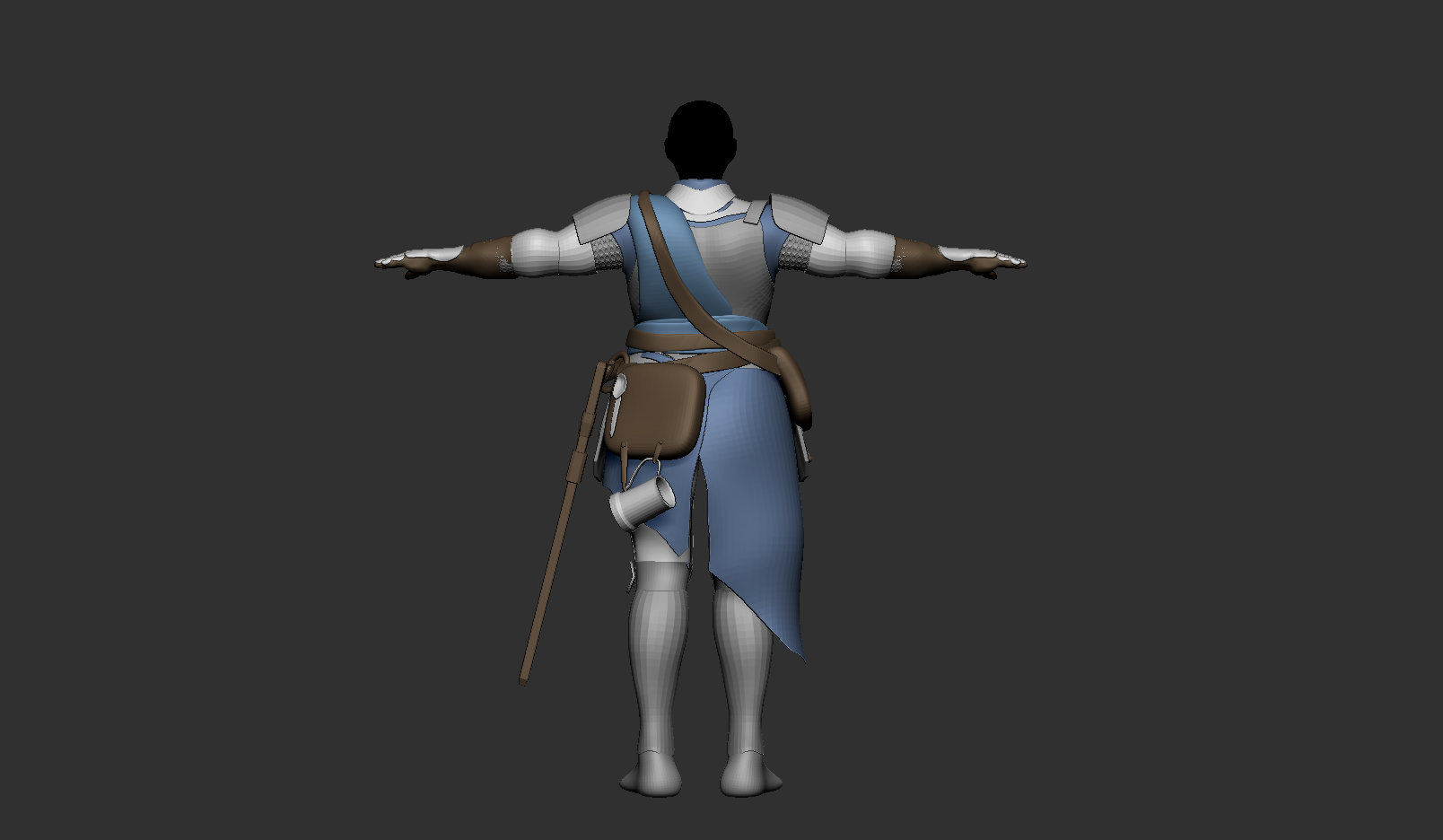 Continuing with concepts. This one is less so about the original traveling mercenary idea, and more so about an established “dragon knight”. The idea sprang to me when looking at German armor, and the fluting on the armor left me with the impression of dragon wings.

To further emphasize the idea of dragons I searched for some scale armor, and found the GoT Kingsguards armor. I still want the gothic german shapes to be the primary influence, but adding just a little bit of scales around the arms and the hips are hopefully enough to take it into the world of fantasy. 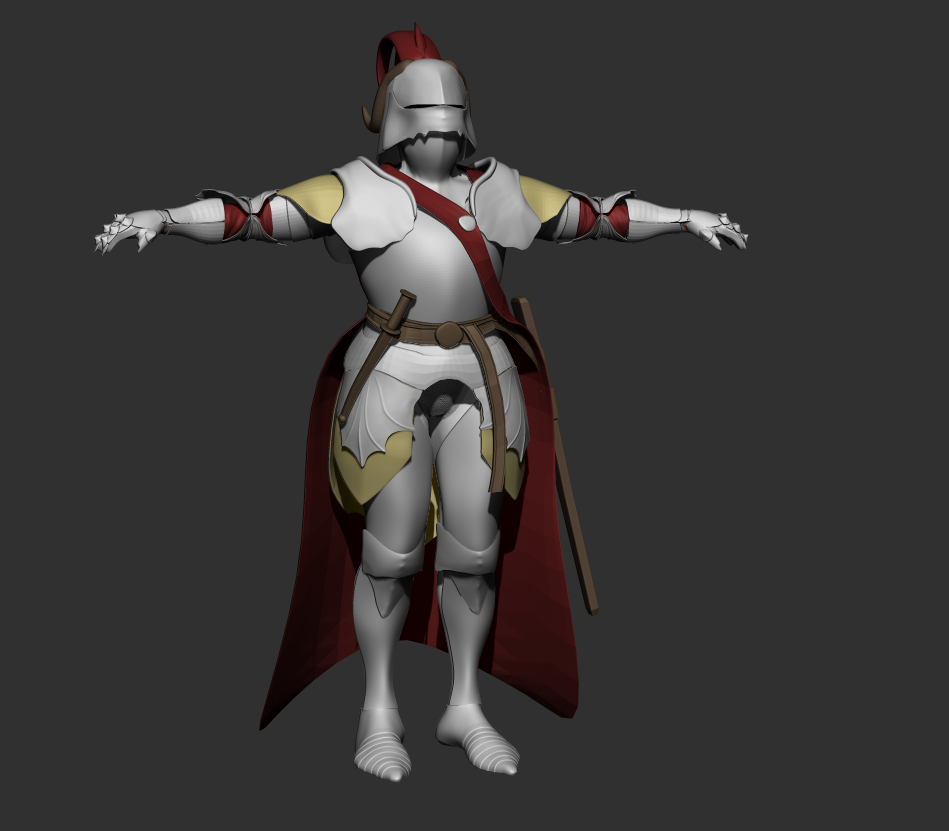 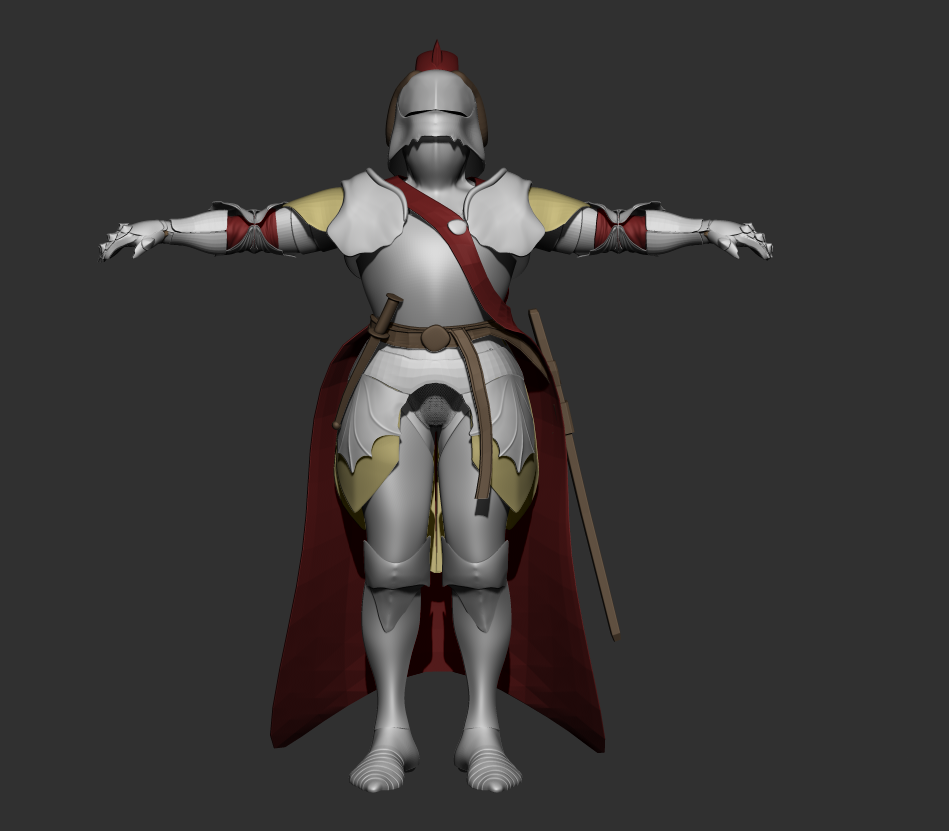 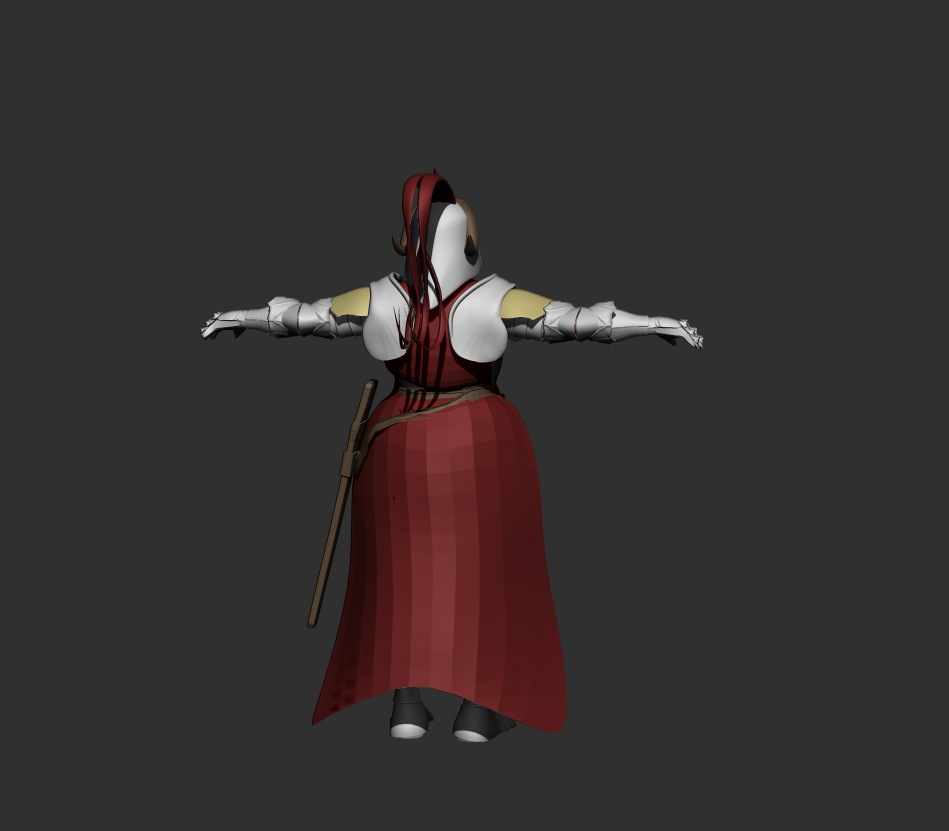 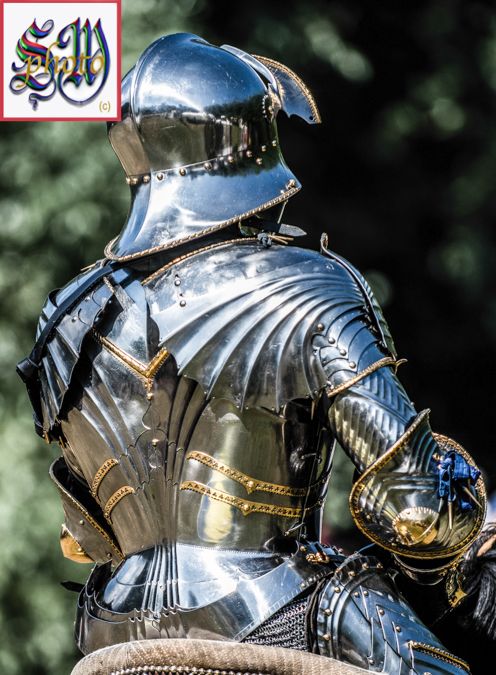 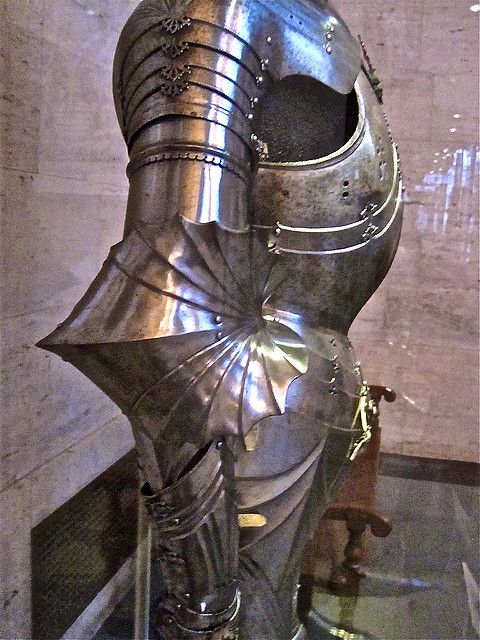 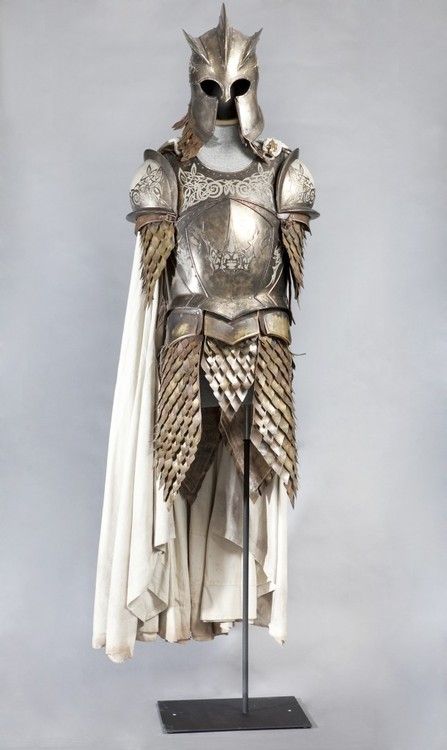 Following this I went for a combination of spanish and french design. Not a whole lot to comment on here. I took 4 images that had elements of design I liked. I wanted a more nimble and agile feeling to her, so this design does not feature plating on the legs, and her arms are only protected by pauldrons. 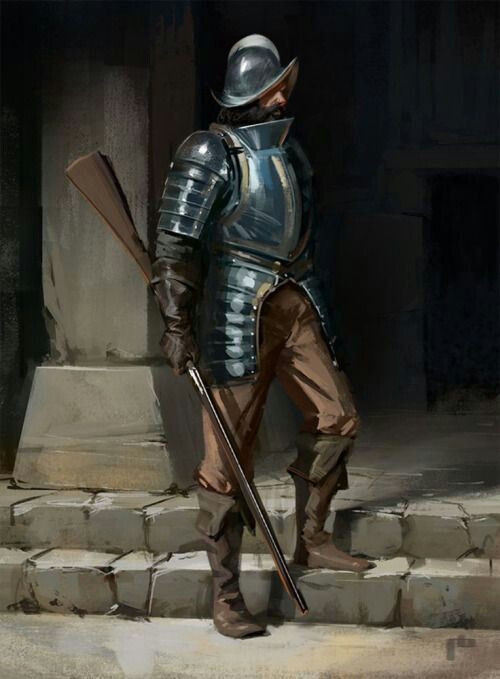 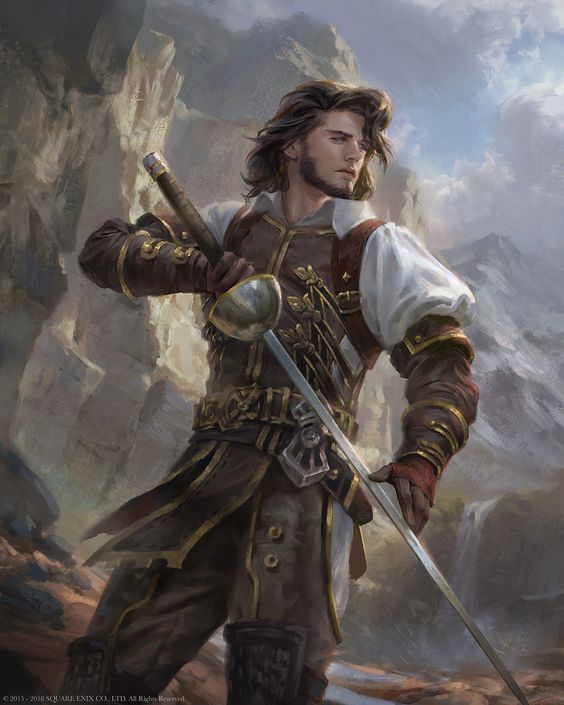 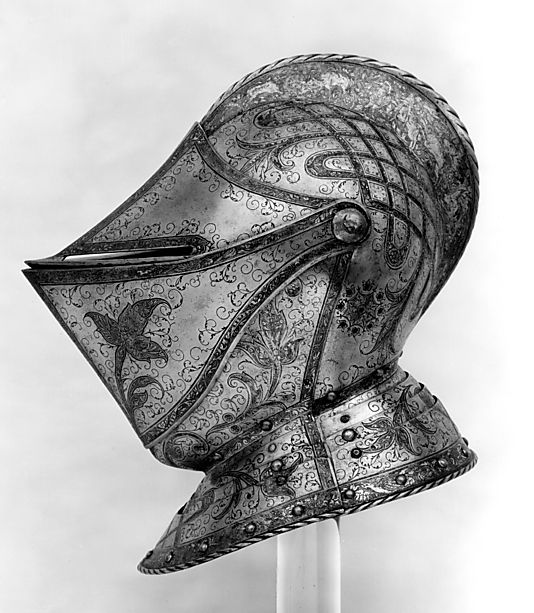 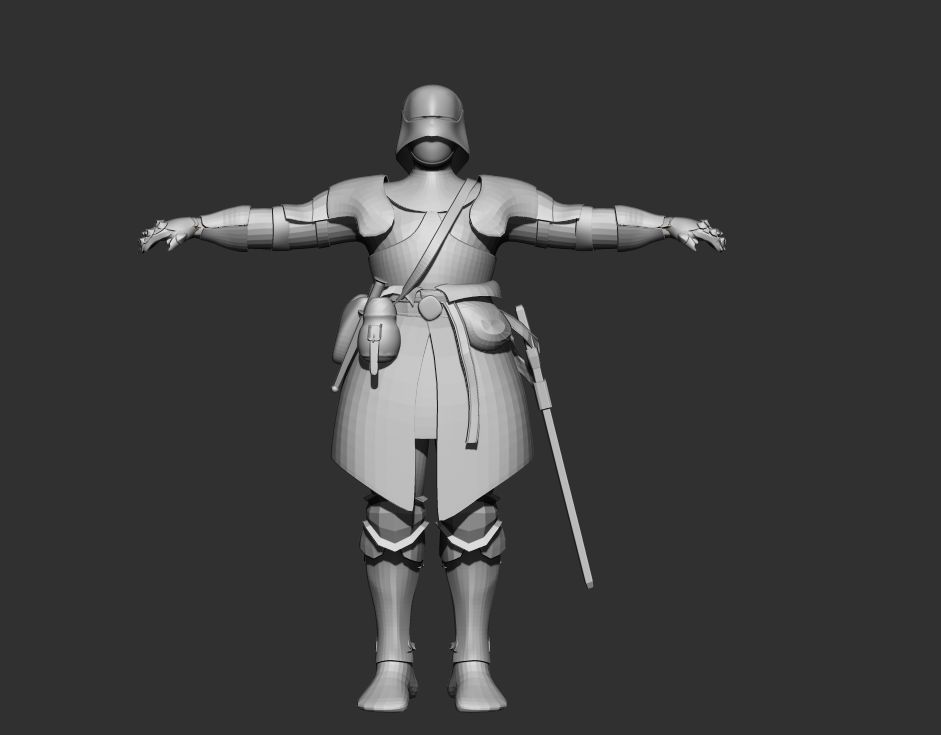 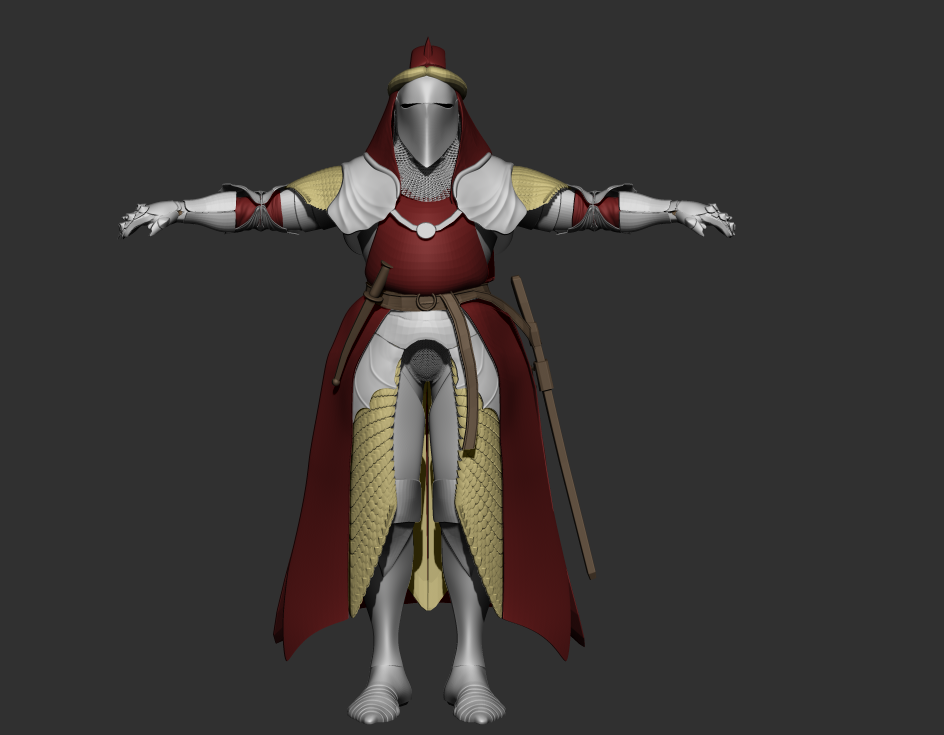 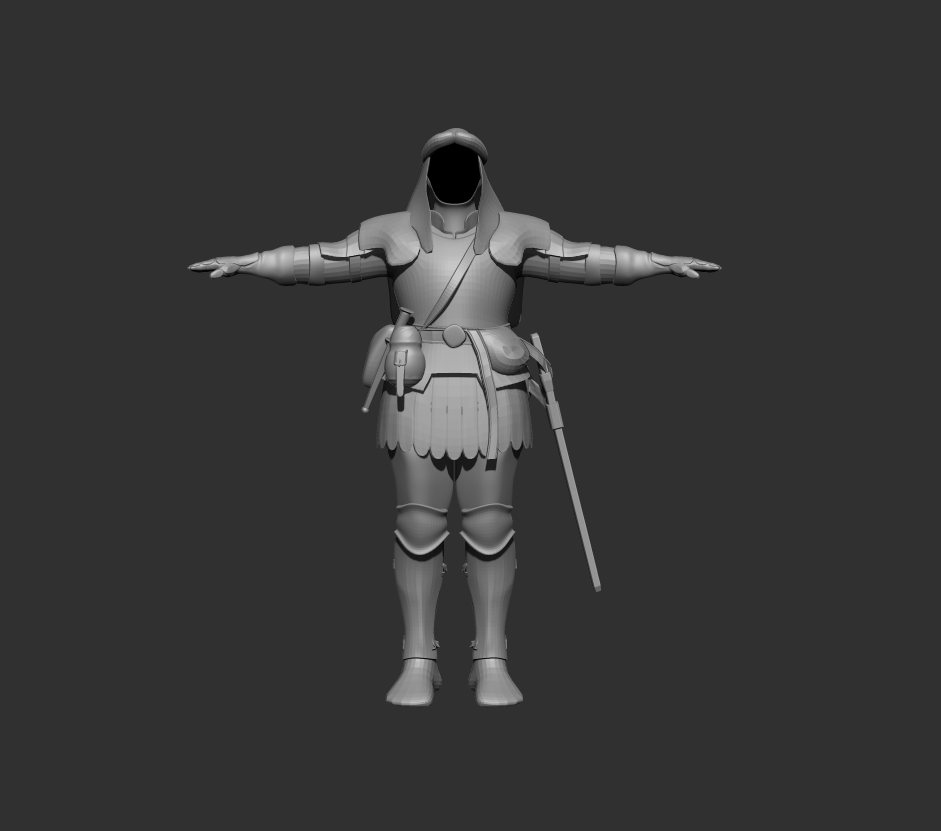 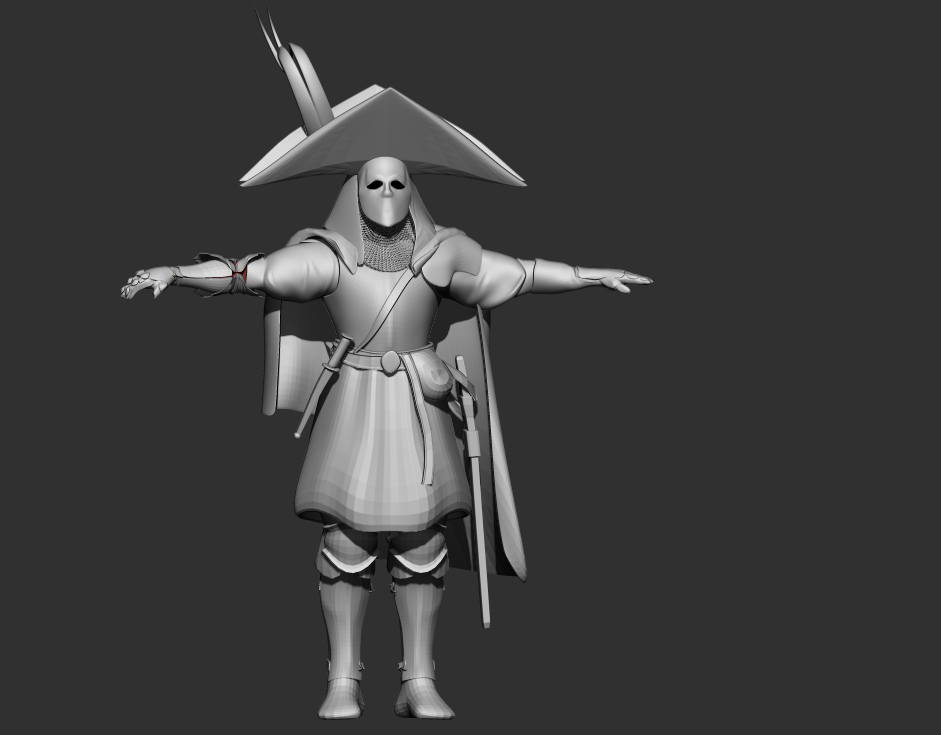 The eyes are a little crazy in BPR, but ignore them as best as you can.

I think it’s time to put an end to the concepting now and get to work on production. 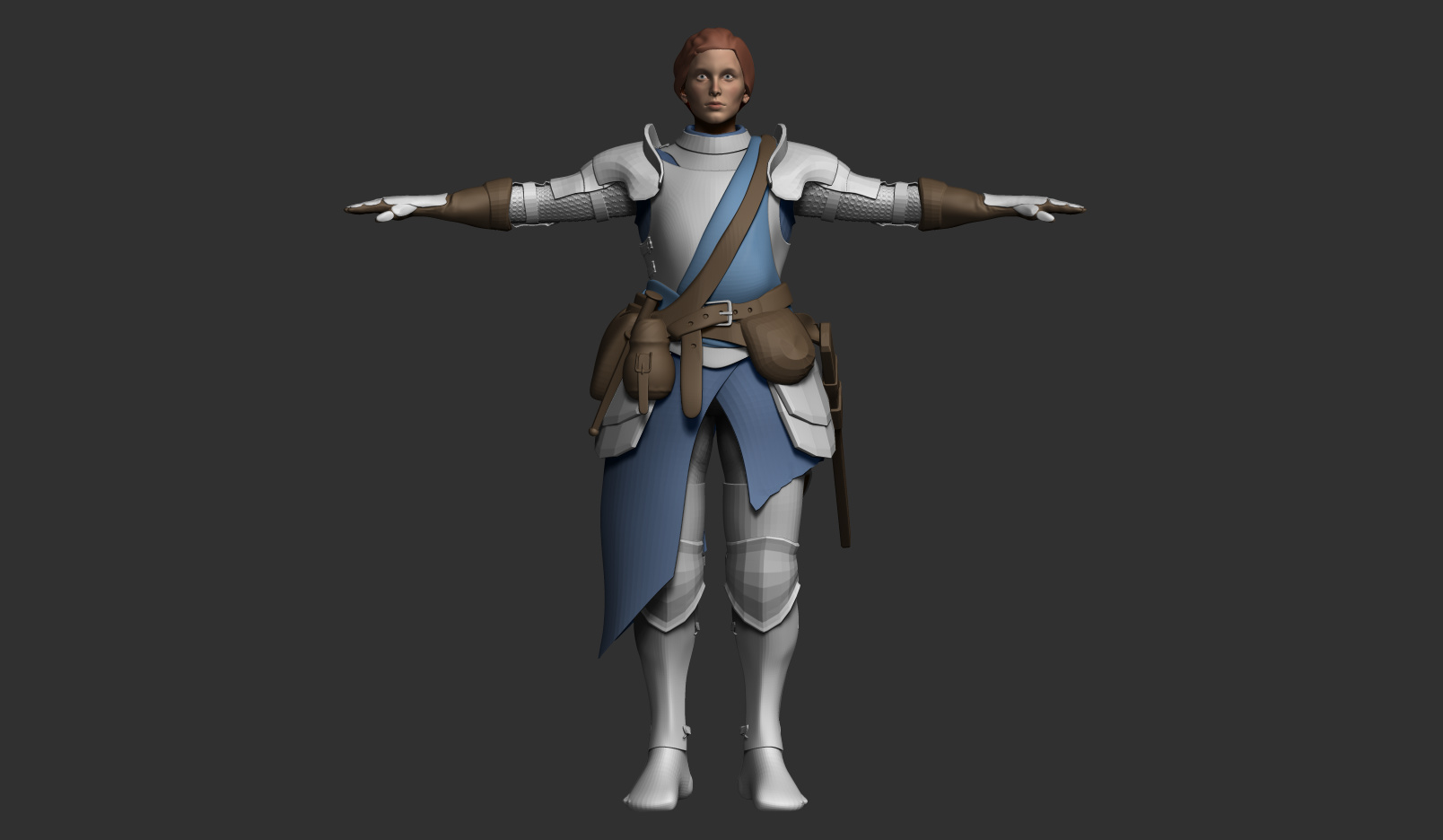 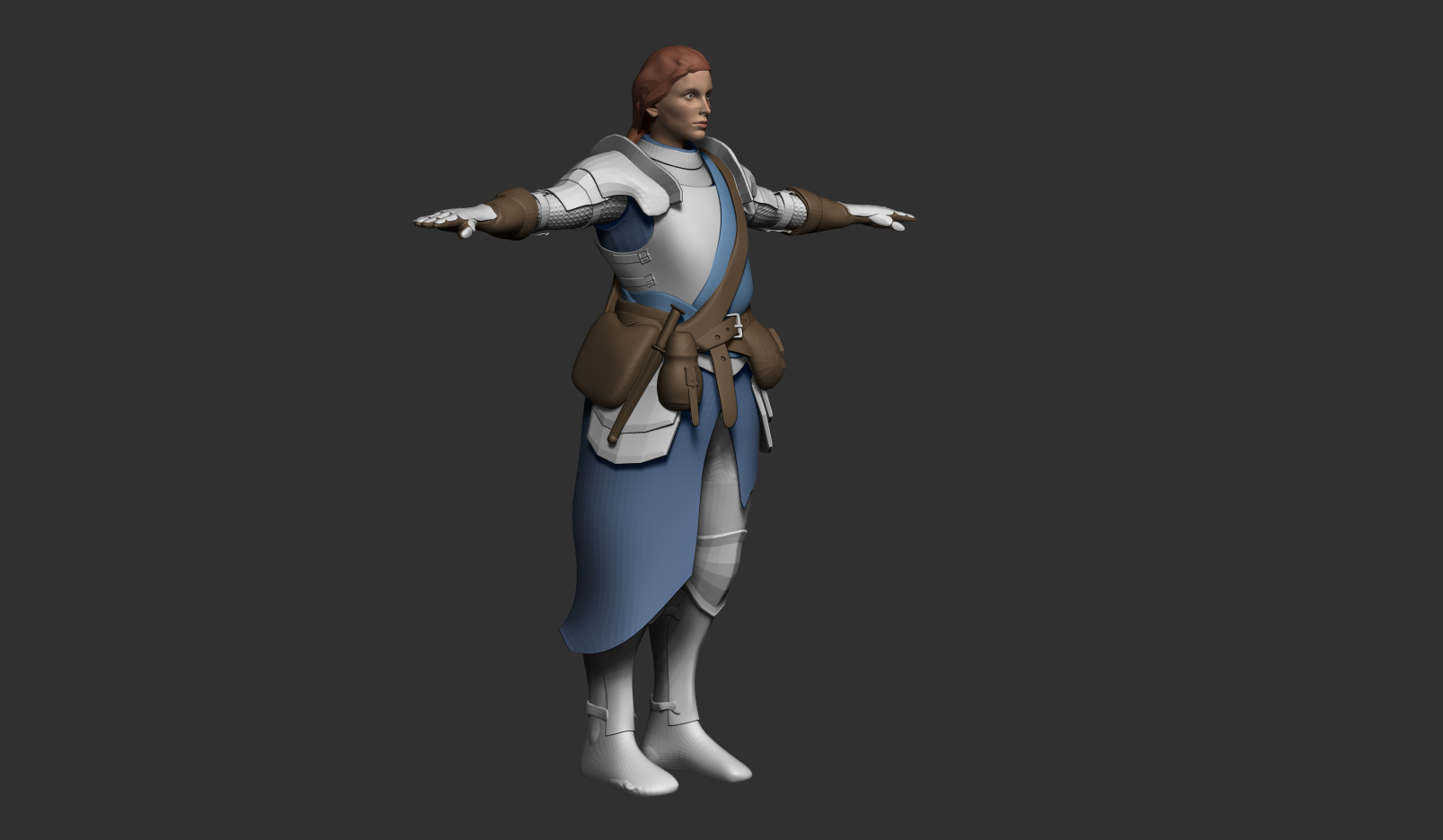 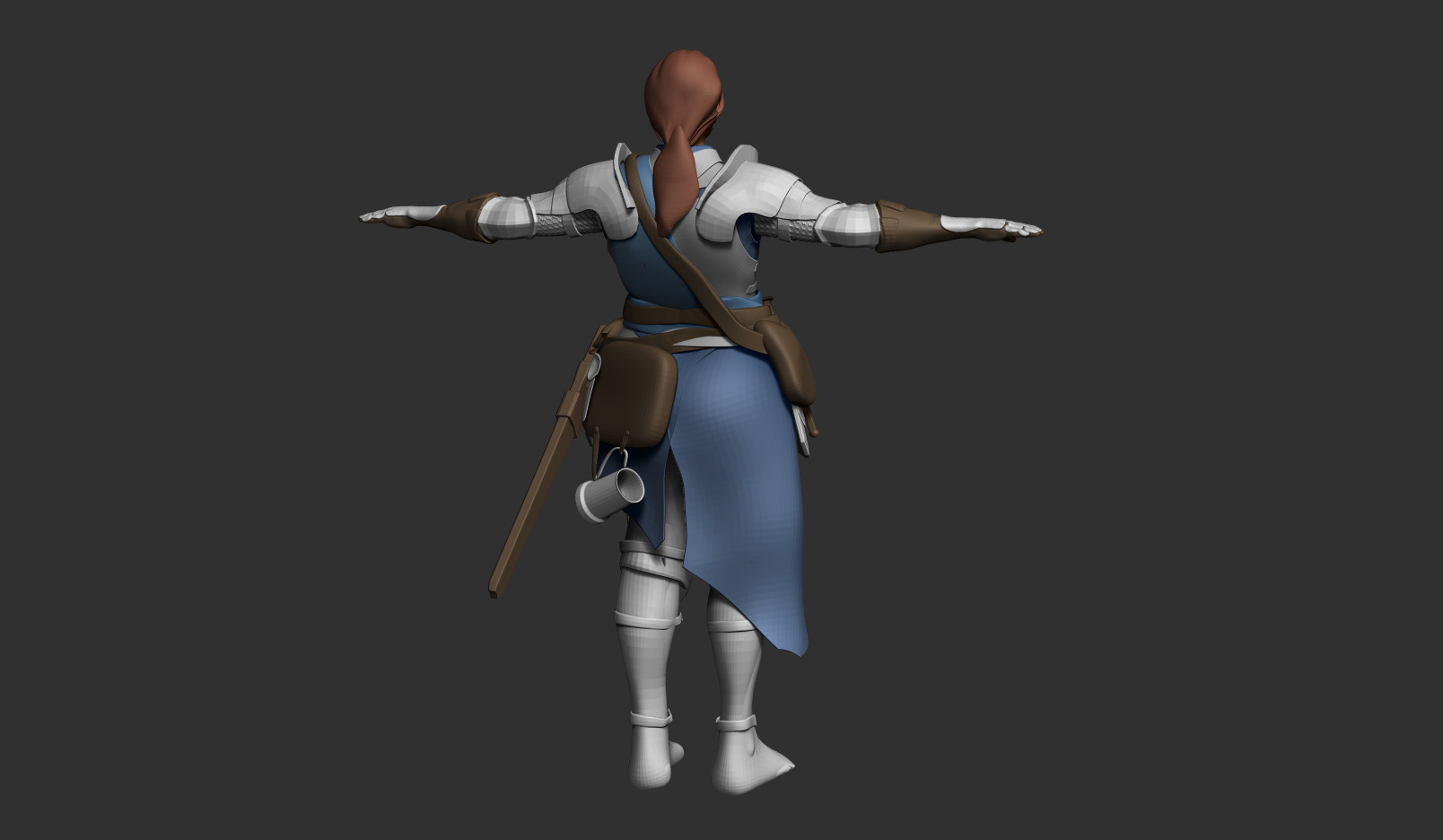 Hey Joakim,
Really enjoying these concepts and how much thought you’re putting into telling a story with these characters.
I also think your simple base structure will be hugely beneficial for when you begin the production on your characters. Excited to see how they come along

Whew. A good bit of work happened in the last week. I feel myself getting a bit slower at work due to revisiting proportions, being indecisive, and trying to figure small things out. I also dwelled into MD, and the gambeson is made in that software. 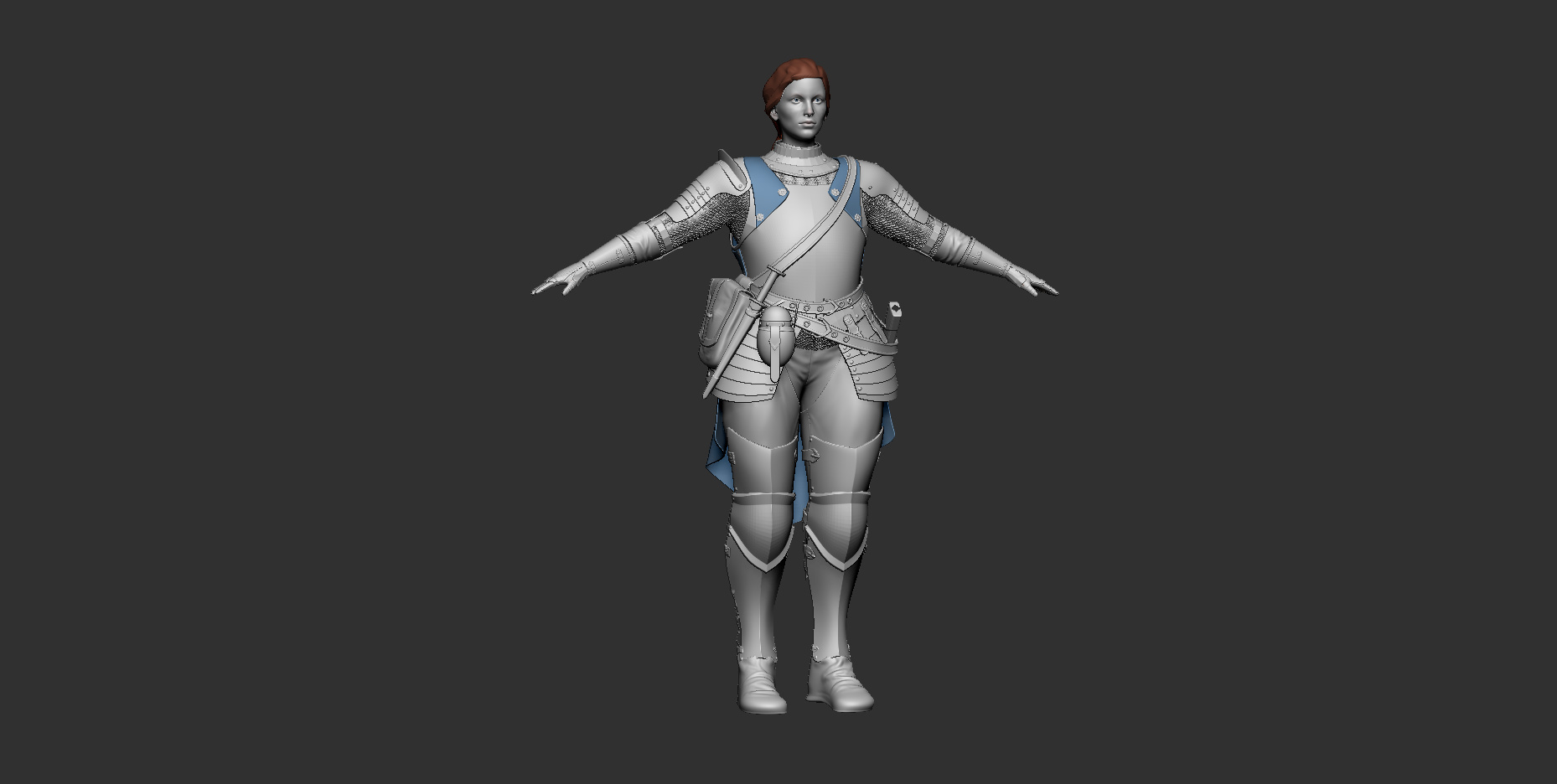 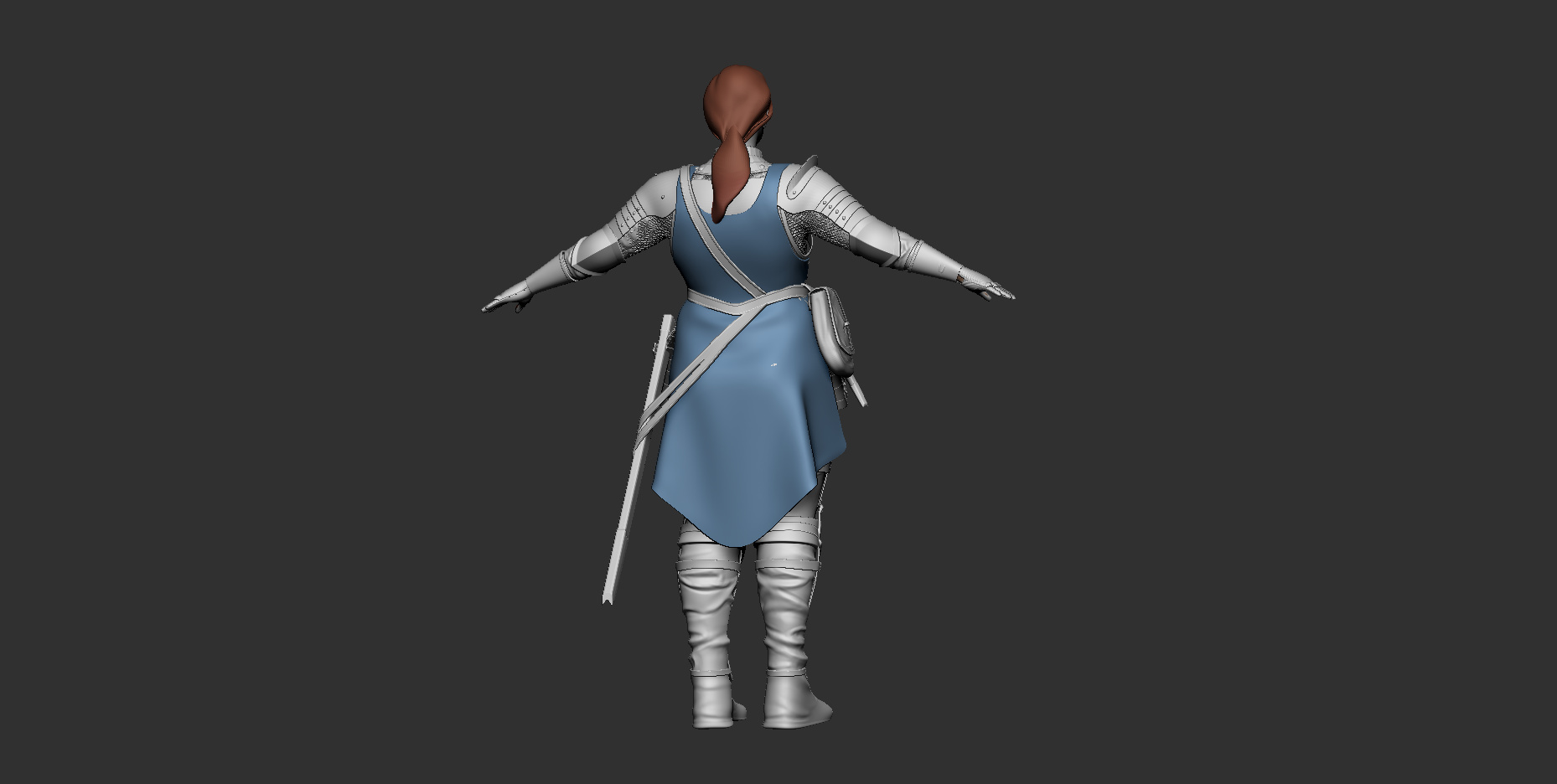 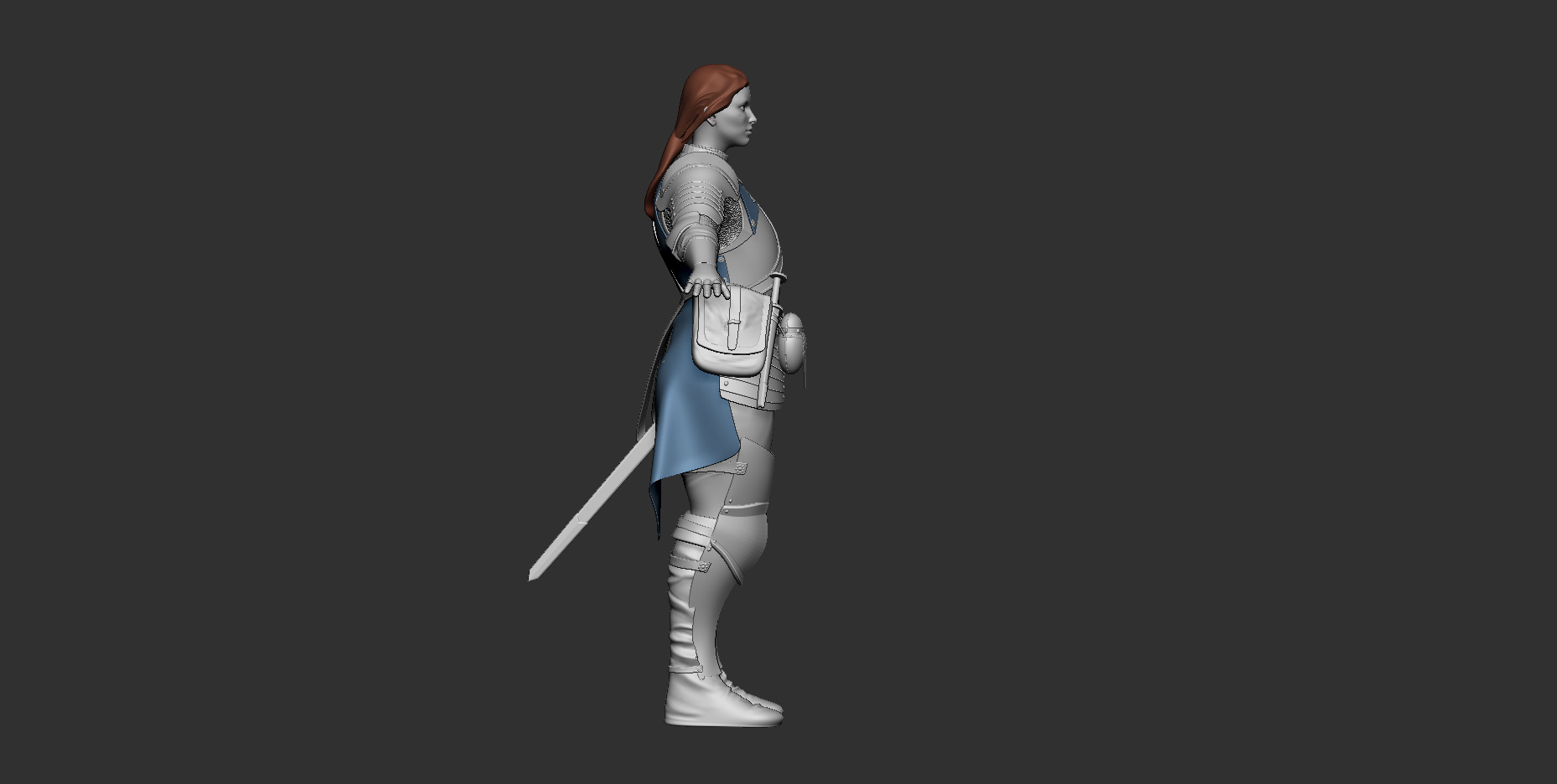 Update to the clothing 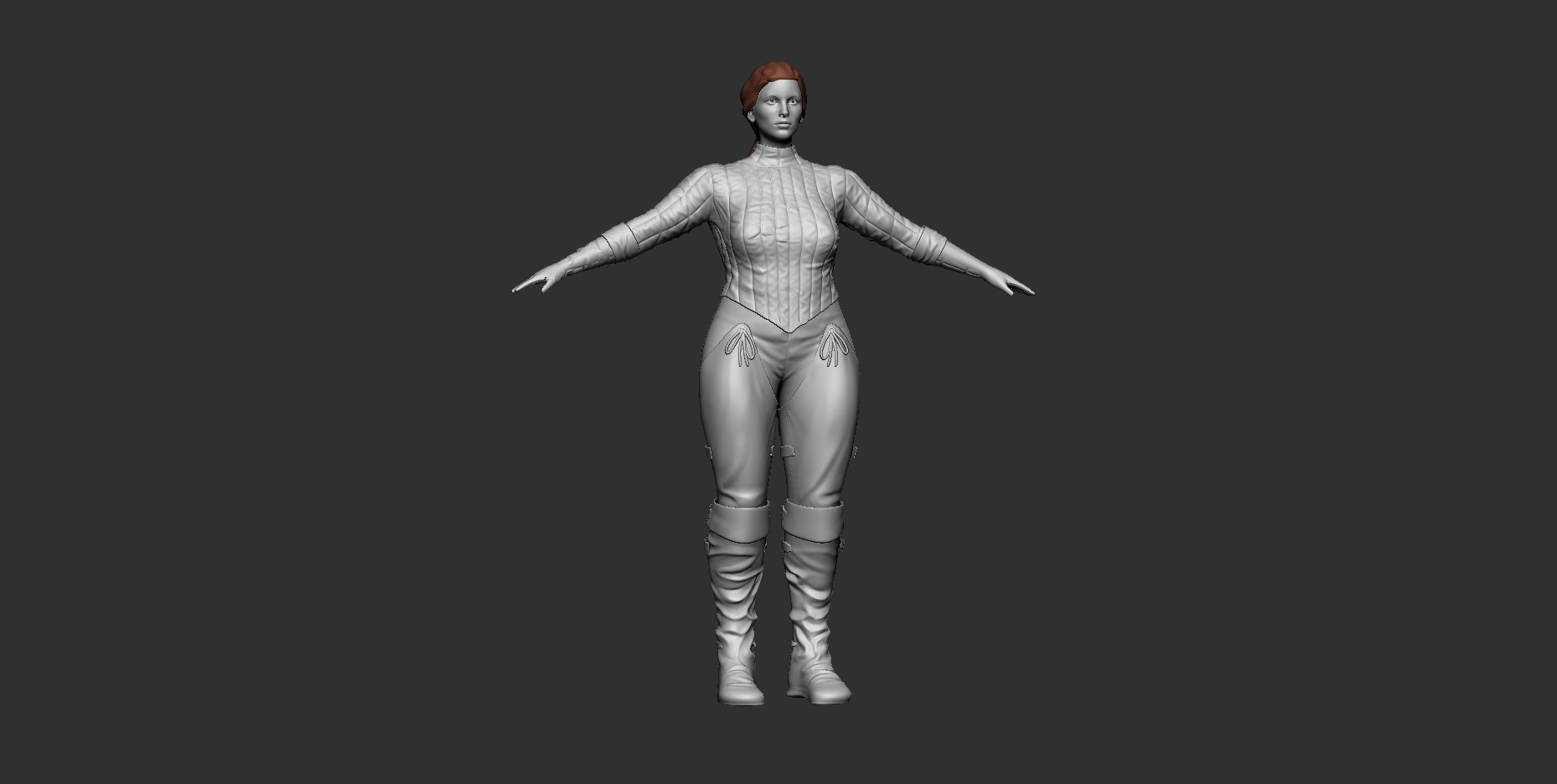 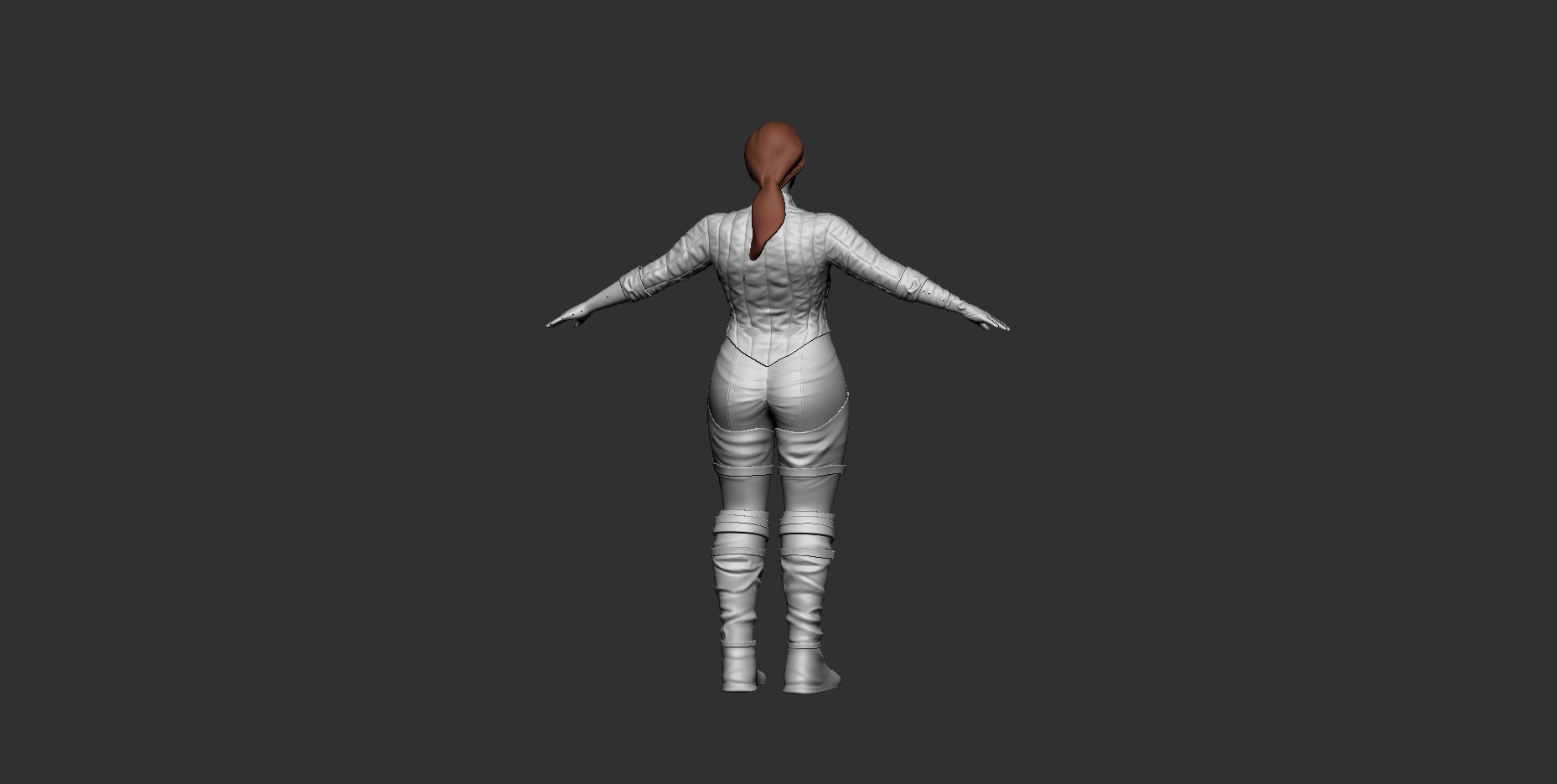 The proportions are very possible, but I’m not sure if the current anatomy is what you are after. Post you references for anatomy too. I like the cloth wrinkles. Are you orking the cloth manually or are you using a software like Marvelous Designer?

I kinda fell out of posting here on CGS for a while, since it sort of felt like I was talking to a vacuum. But the anatomy was probably a little bit off, but a lot of that was fixed for the final presentation. There’s also probably a bit of funny monkey bizz going on with the FoV.

The two things that were done using MD were the cloak, and the gambeson. The pants, gloves and boots were all extracted from the basemesh’s topology.

Following that reply, It’s time to conclude this project about a young knight.

Throughout development time I’ve learned the importance of a bit of planning, and working non-destructively using masks, layers and morph targets. On previous projects it’s always been a case of doing things 1 or 2 times and then proceeding, only to find that things are not working at a later stage in the pipeline, followed by mental mentdown and emotional trauma.

While I’ve not worked things out perfectly here either, this project have given me some insight into what needs to enter the equation when iterating design, planning materials, and developing the necessary components to squeeze into unreal’s shaders.

A big struggle was juggling the face(s) between the viewport of ZBrush, the SSS and colours in Substance, and the final result in UE4. Especially the eyes which are a big part of the final look, and in this case they are uniquely developed with Epic’s shader in mind.

Following the conclusion of this character, I believe it’s time to setup a few smaller projects and reinforce some of the lessons learned throught this development period. 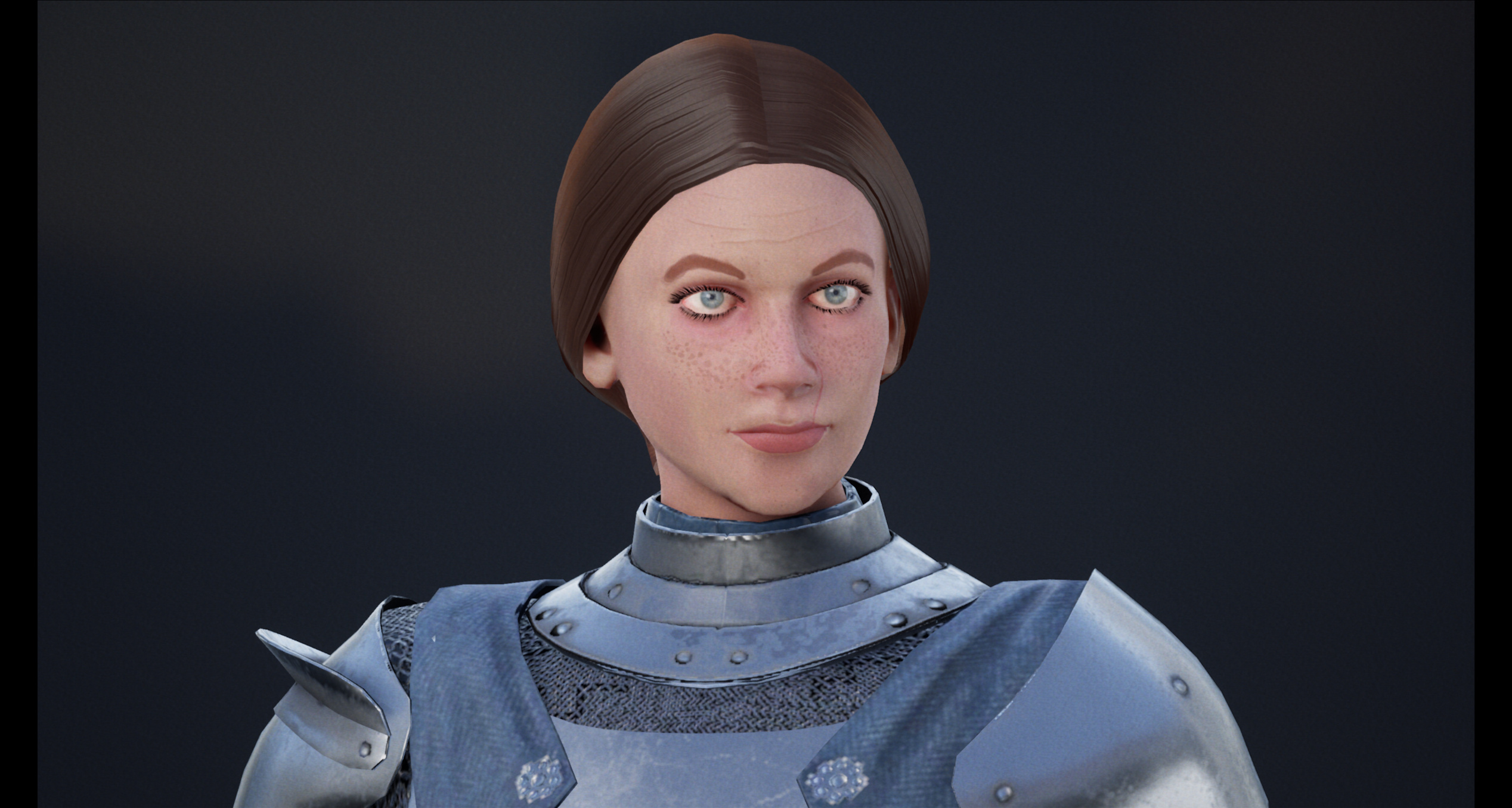 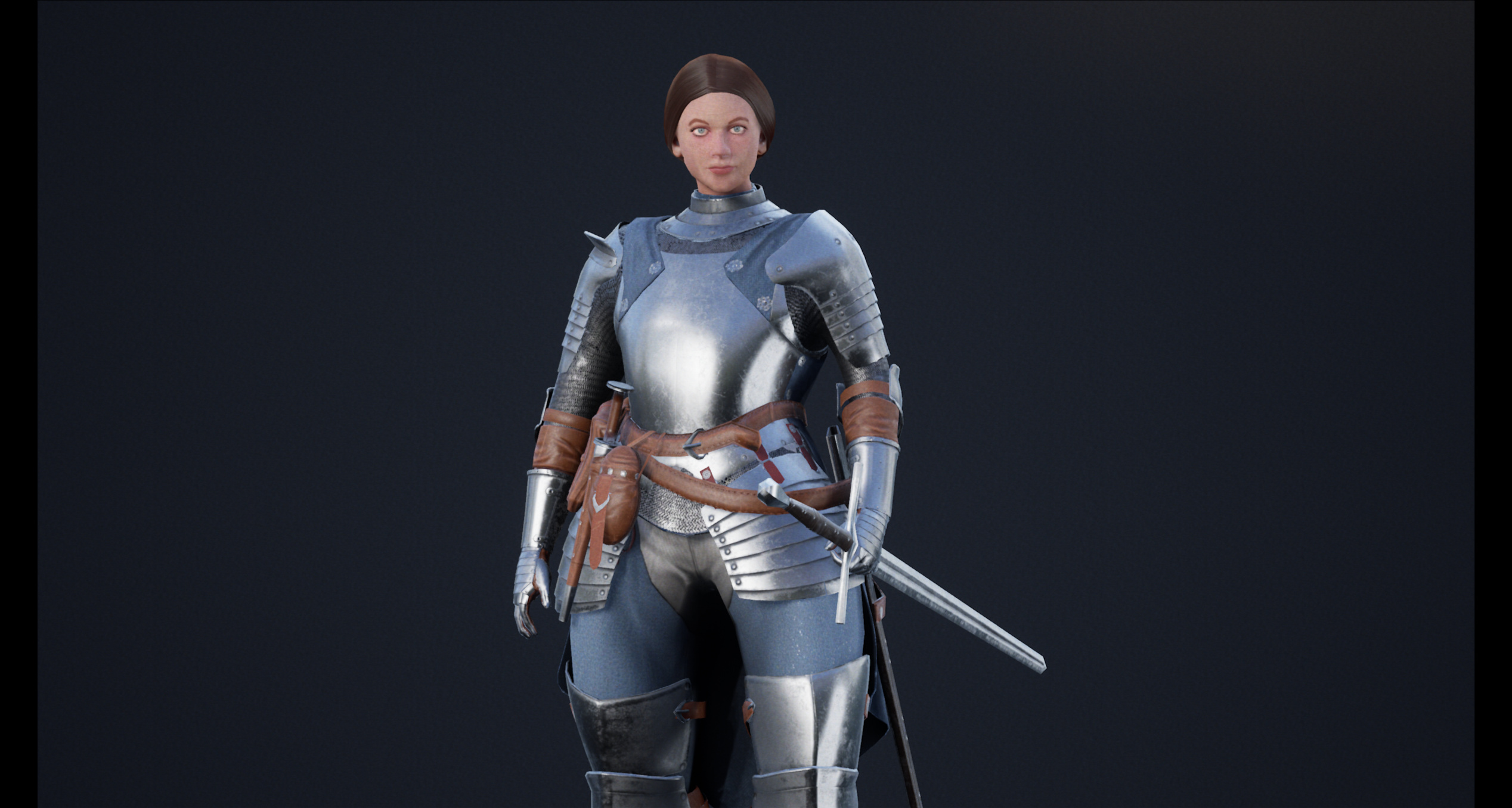 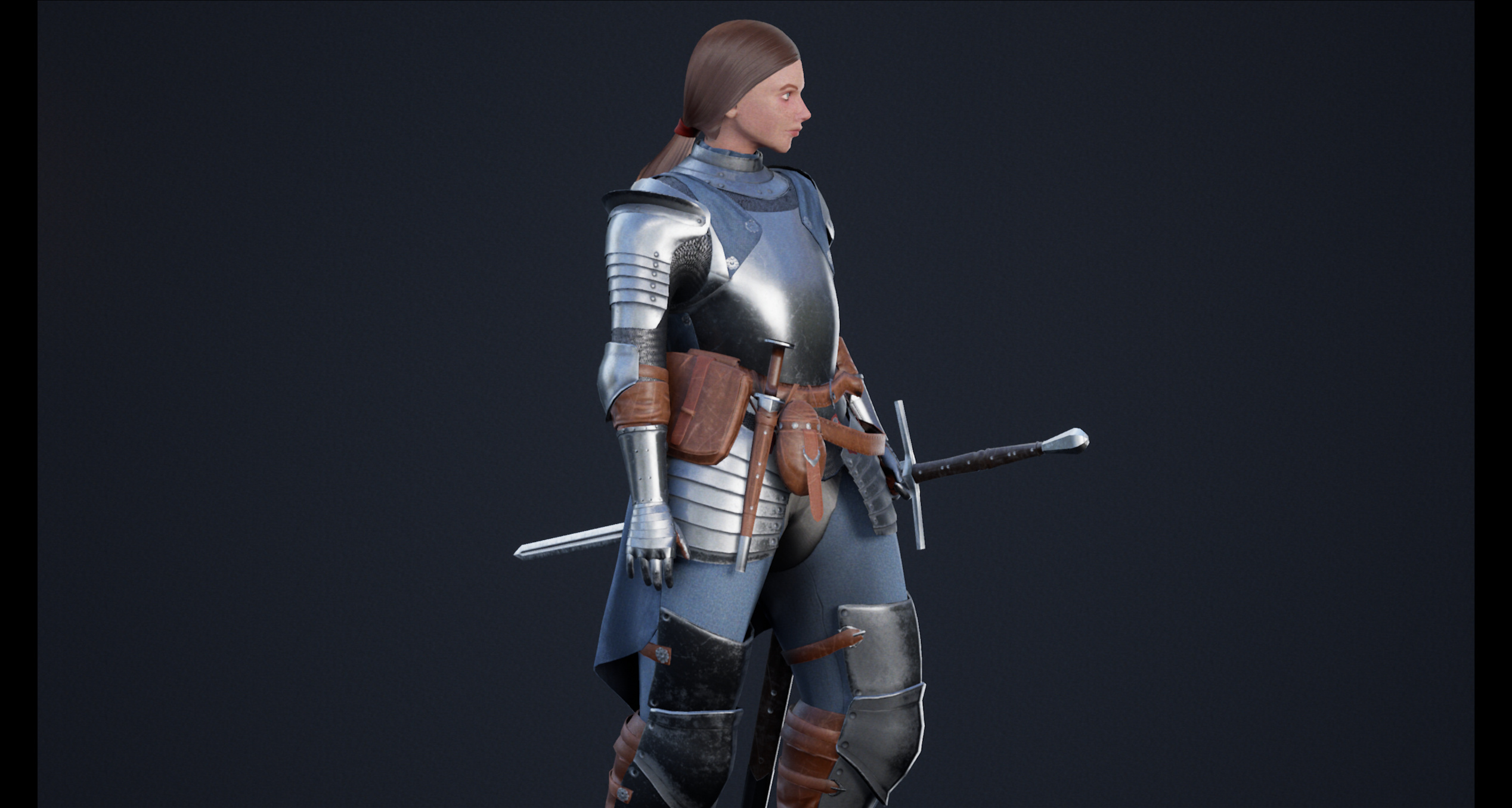 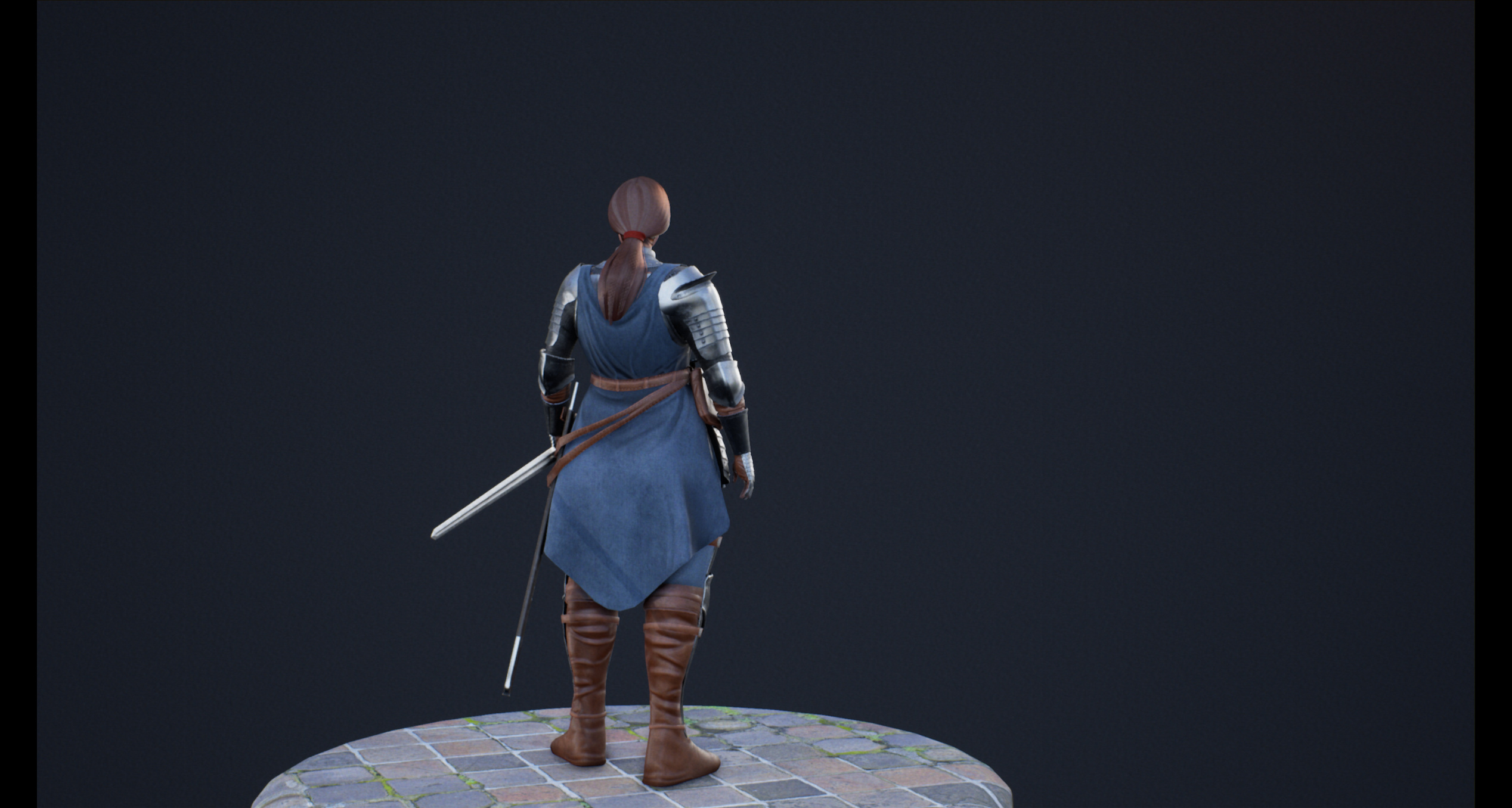 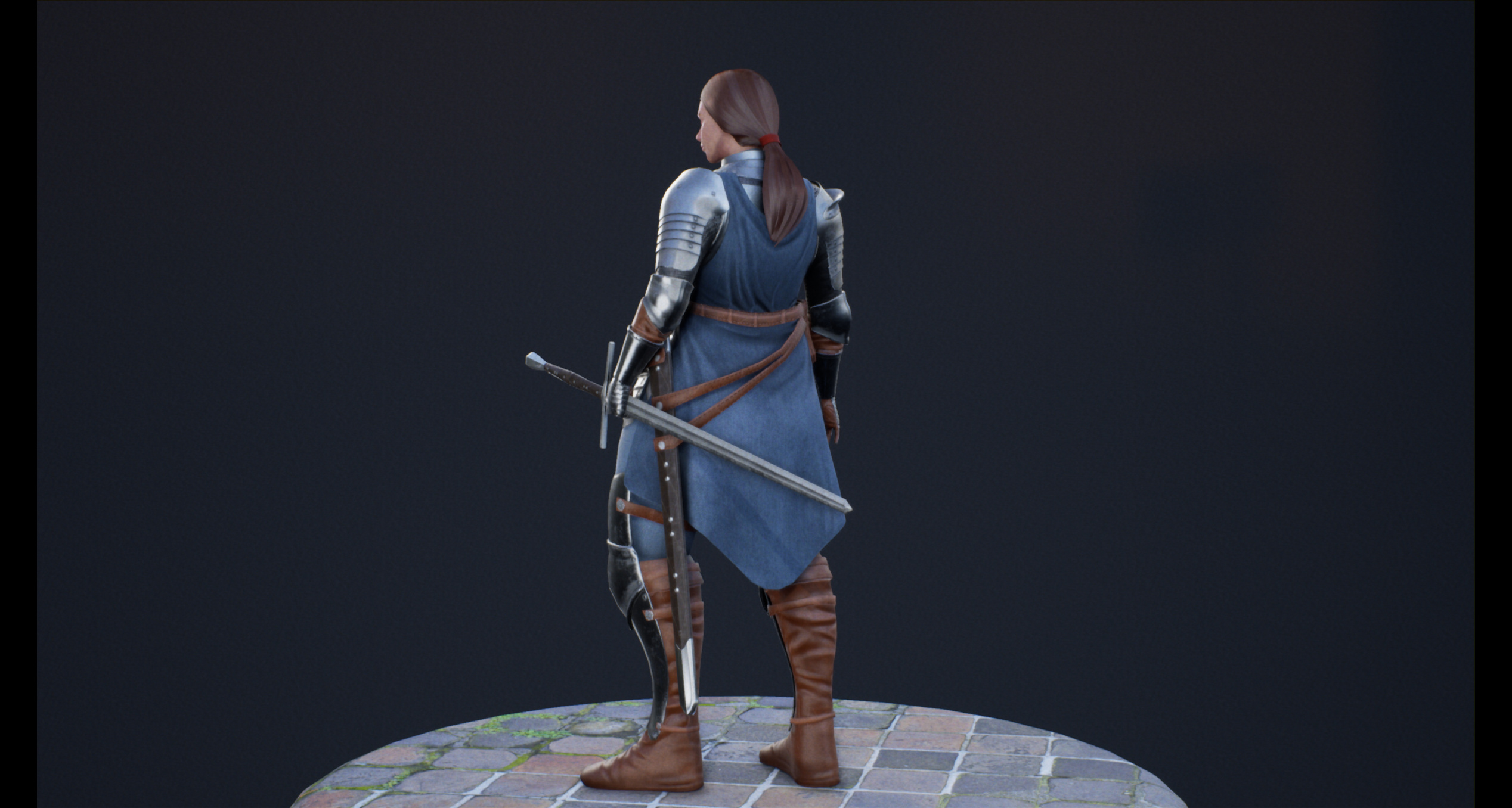