I like the 3rd thumb, probably becasue it reminds me of the Neverending story

The head design is really cool too!

Looking forward to what you go with!

Sorry for the belated reply -

A quick sketch. I’m not sure I really want to paint digitally for this one, I’m going to use this as an opportunity to get some traditional ideation going, with possibilities for a finished digital painting down the line.

[left]AIR, can’t wait to see the finish - this will be a good one!

tbrosati, keep working on your sketches, and definitely check out some reference. Maybe try some non frontal poses as well. Keep going.

Cool subject! I would really like to find the time to participate. An image popped up in my head imediately after read about this workshop. I’ve thought about creating a chameleon in zbrush for a while, and this workshop would be a perfect opportunity to do it.

Here’s my preliminary sketch. Allthough I think chameleons are pretty cool, and unusual here in Norway where I live, it’s still kinda ordinary, so I thought maybe I’d make the owner a bit extraordinary? What do you think?

Welcome Markuss, fantastic sketch, it’s great how the pair match! I guess there is that bit about pets resembling their owners.

Looking forward to the progress and the zbrush version!

Thanks Rebecca, allthough looking at the first sketch I notice some glaring mistakes in the proportions and posture. I used the good old flip canvas trick, and that helped me see some of it a bit more clearly. I also extended the canvas so I could paint more of her body. That also helped me see how things worked together. I really need to practice my drawing and painting skills more. Here’s an image showing my progress on the concept sketch today. I hope it’s improving.

Anyways, there are some interesting and fun contributions in this thread allready…

Rebecca too: Nice start! Will be interesting to see how and what it turns out to be! Great loose style…

I really like the colours you’re going for! very fresh look gpeaslee, nice to see you posting - I’d give the arms and legs more love though, definitely check out some anatomy books or references online (which exist in abundance) - for sure the arms and legs need some work. Also, be sure to have 8 concepts and not just one sketch.

Some nice entries starting to roll in… cool!

Totally unhappy with the bird-croc. I hope I can find a more interesting pet for that girl. 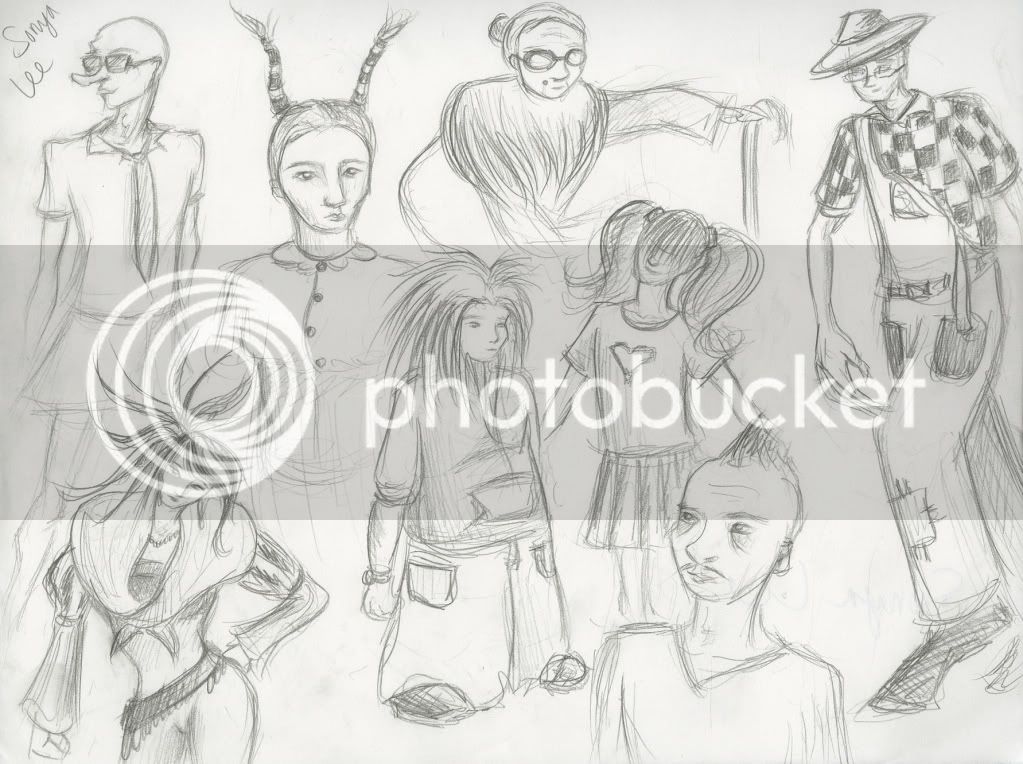 Michelle, these are cute! I’m digging the lower right hand sketch, the girl with the alien on her head, and the hippo on the chair - what is your favorite? Would love to see both ideas explored more, maybe tweaking the anatomy and the position of the characters relative to the viewer. Good starts!

Johan, interesting sketch, they both look sort of evil, is there a reason?

Sonya, really liking these sketches! They all exhibit some nice investment in terms of thought process and execution, nicely done. Lots of possibilities here - though less defined, the cow / slug / snail cracks me up, but as well there seem to be lots of other sketches with great potential. Good stuff! Kudos on doing the separate sketches for the owners, would like to see those maybe a little more extreme, maybe choose a pet and then make the owner somewhat resemble it in style or in theme. Keep exploring and pushing your ideas.

Looking forward to see other works finished aswell.
Posted this in finished 3d works also.
Modeling done in zbrush, heavy post in photoshop, used two photos also, one is the background, and other is spinning wheel_didnt felt like modeling it…

Here is small story behind my image!

She was an old Knitter living beneath mountains of Amdo, one of Tibetan northeast regions.
She lived lonely life on the outskirts of a small village in which all people thought she was a witch.
Indeed, this old lady wasn’t ordinary by many standards, one in particular, her calling.
She made here living by producing rare red silk known by the name Arakna.
Nothing unusual with that at first glance one would say, but, those who knew her better, knew where she got that silk from.
She kept few giant spiders in her manor as her pets, whose webbing, if properly refined, could produce this though shiny rare material.
In this image we see her absently gazing ahead, while holding one of her nasty pets.

ps, I know you mentioned we should restrain from big post’s, if so for the final, I’l edit to smaller, to 800px width… regards!

WOW!! What a fantastic image, and in such a short period of time. Great stuff!!

Hello everybody. Nice work here and many interesting concepts.

anyway, played around with my ideas - going for ‘space pilot and her companion’

Maya and Mo - just the names that came to me…

little progress on both this time:

I am in, let see i can do in two weeks. great subject.

I am new here hope to have a good time here.

I added color. Of course, everything needs depth and more details but I’m working on it.