How to connect a bend deformer to joints (skeleton)

I’ve been working on a butterfly rig and for the proboscis I used a bend deformer to have the shape of a snail shell. I connected the curvature node to a controller and it works as expected. But now I have my entire skeleton with joints and I don’t know how to connect properly my bend controller to the skeleton. Is there a solution to connect a bend deformer to a skinned skeleton ? And if not have you got others ideas ? 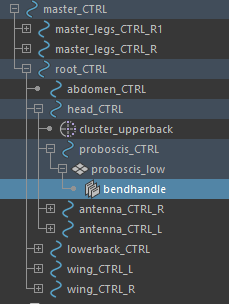 Generally no, it’s not a good idea to include geo in the controllers hierarchy. Your geo needs to be separate from items that will be under the Global Move control like controllers and joints, otherwise you may end up with double transformations. What you can do instead is select another existing control, say your head_CTRL and Add Attribute to add another channel, and call it Nose Bend or Deformer or whatever. Then you can use the Connection Editor to connect your new attribute node to the curvature of the bend deformer. That’s one way you can do it and have less controllers on the geometry (so your model has a cleaner look). You can also create a control just for the nose (like you have done) and connect, say, its Translate X channel to the curvature of the bend deformer. This control would be parented to another control, like the Head Control.

Thank you for your help. I made an attribute for the head_CTRL like you suggested. I had my nose skinned so I delete the skin and I made a constraint parent from the proboscis geo to the head controler.

Thank you for everything