How can I manipulate the position of a point in Xpresso? [SOLVED]

I know I can do it with the Tracer but I want to use a more complex setup later.

I have found out that I can make an object dependent of a spline point but I can’t figure out how to do the opposite.
I want to move the objects not the spline points.

The following 3 nodes do the opposite of what I want. 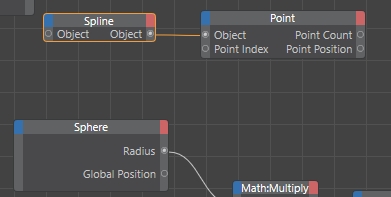 Click on the blue to get a point position input and set the point indexes to 0 and 1 in attribute manager. 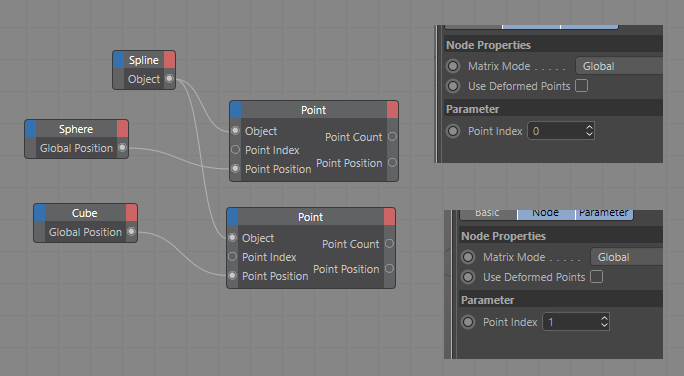 Thank you JED.
Once more I’ve fallen victim of the unintuitive information flow of nodes in C4D…

I came across this thread while trying to solve a similar problem.

I’m trying to move multiple points of a single object using XPresso.
Basically, I created a cylinder, made a point selection of the points at one end and am trying to create an XPresso setup where I can have slider control the position of all the points at the one end of the cylinder.

Is this possible, and/or can you please help?

Xpresso isn’t the best tool here, while it offers rudimentary geometry manipulation it can’t handle selections. Scene Nodes however can. Check the attached scene for an example of a Scene Nodes Capsule that offsets the points of a given selection in local space. Please note that the name of the point selection has to be set in quotation marks.
Modify Selected 02.c4d (236.8 KB)

It might help if Maxon reverse the damage labelling the most significant update to C4D in decades as a ‘Tech Demo’ and more people might use Scene Nodes.

If anything i would label the Scene Manager and the Op graph as Tech Demo, the Scene Nodes in Capsules are production ready. 2023.1 added a few of them and so did previous updates.

There is a reason why C4D users on this forum still look for answers in Xpresso over Scene Nodes. There’s a reason why high profile tutorialists have given Scene Nodes the swerve. Bad marketing of a powerful feature.

#Nodevember is a perfect opportunity to demonstrate Scene Nodes but an opportunity missed so far.