Sorry for the no updates, I have been working but the gains seem pretty small so I was waiting for something better. Just getting her costume parts in place and ready for more detailed sculpting. Trying not to hit road blocks just yet.

@cs1, Boone - Thanks guys
@Japetus, Airflow - I agree but check out this reference I’m using. Her eyes are pretty slanted in it so I’m trying to decide how to translate the drawing. Any ideas?

@Japetus, Airflow - I agree but check out this reference I’m using. Her eyes are pretty slanted in it so I’m trying to decide how to translate the drawing. Any ideas?

I’d say its the eye brows, Wyatt, as the front face sketch suggests eye-brows that arc upwards to her temples. On your sculpt they appear to arc downwards.

Yesss, yess…updates.
As for the eye thing, Her eyes being slanted is an illusion both because of the slantiness of her brows and the way her lashes are drawn upwards at the outer corners of her eyes.
It’s the sort of thing make-up artists use in real life. They can shape the eye any way they want, by adding lashes and drawing color and lines to give the viewer and illusion of slanted, catty eyes.
Cheetara’s eyes are almond shaped and they do have a slight slant. The extreme cat look of her eyes is just from lines and features on her face.

I did a trace-over of the ref images to enhance it a bit.

Thanks for the insight guys. Progress, I hope.
It’s funny how vastly different the varied materials make her look. I’m trying to keep that half asleep look Cheetara always had.

I think you should share front and side view of your head… Because you eyes are off and the head suffer of it.

Hi, I think the ears are too far away from the front of the head. Usually two eye widths is the distance of an ear from the outer edge of an eye. Also getting the eyebrow on there will help with the props on the upper eyelid and the positioning of the elements of the eye.

Last update before posing. Got all the base colors in place. I never realized just how ridiculously pale Cheetara was until I grabbed her skin with the color picker. I kept thinking it was wrong because its an almost white greyish color. I dropped in a placeholder for the Thundercat symbol but its hard to tell just how it fits. In some of the drawings it looks like a patch sewn in. In others it looks like its sitting on top like this. Well not quite like this as it looks kinda silly.

I also spent a few days playing with the hair. That was a serious problem with the 80s challenge and it looked like I was headed down the same path. So I dumped that and tried some fibermesh experiments. Not too bad so I think I’m going that route.

Airflow - I’m not too worried about the ears. There isn’t a single shot I can find where her ears are showing. I was trying to see if they were pointed like Panthro’s. I did check the distance like you said though and I think it’s good.

Now with the colors on it looking great. Yeah, the ear thing is to help with proportion. I generally use the eye width as a unit for the whole face. That way you can measure out any concept art and make a template in pshop if need be.
Hair wise, I would go with sculpting rather than fiber, but it looks like this could be more realistic. Maybe try out both. Just make some tapered cylinders and position them, bending to get them in the right shape/position. Work from biggest clump down to smallest. I think it would look better than fiber but good luck what ever.

Now with the colors on it looking great.

Thanks. It’s funny, I kept judging it over and over again but it just kept looking wrong and eventually it was dragging me down. One of the first things I did back at the beginning of August was tilt her eyes to match the perceived slant. You guys kept telling me it was wrong but I guess I’m slow sometimes.

After that last update I tilted them back and just powered through. CS1 was right on the money, it’s an optical illusion created by her markings and makeup. Now with everything painted it looks proper.

Yeah, the ear thing is to help with proportion. I generally use the eye width as a unit for the whole face. That way you can measure out any concept art and make a template in pshop if need be.

That’s one of those things I need to commit to memory. I’ve read the proportions multiple times but when I need it that info always seems to escape me.

Hair wise, I would go with sculpting rather than fiber, but it looks like this could be more realistic. Maybe try out both. Just make some tapered cylinders and position them, bending to get them in the right shape/position. Work from biggest clump down to smallest. I think it would look better than fiber but good luck what ever.

I did try but the results were pretty bad. I think the main problem is not having a clear picture of what the hair should look like. I went back and used the same fibermesh techniques I developed on Toph and it looks pretty good. For now I’m going to go with what I know I can get right.

I have since found this statue that has pretty good hair so I may try and sculpt this at a later date. Shoot, once my 3D printer comes in I may try making a statue out of this. 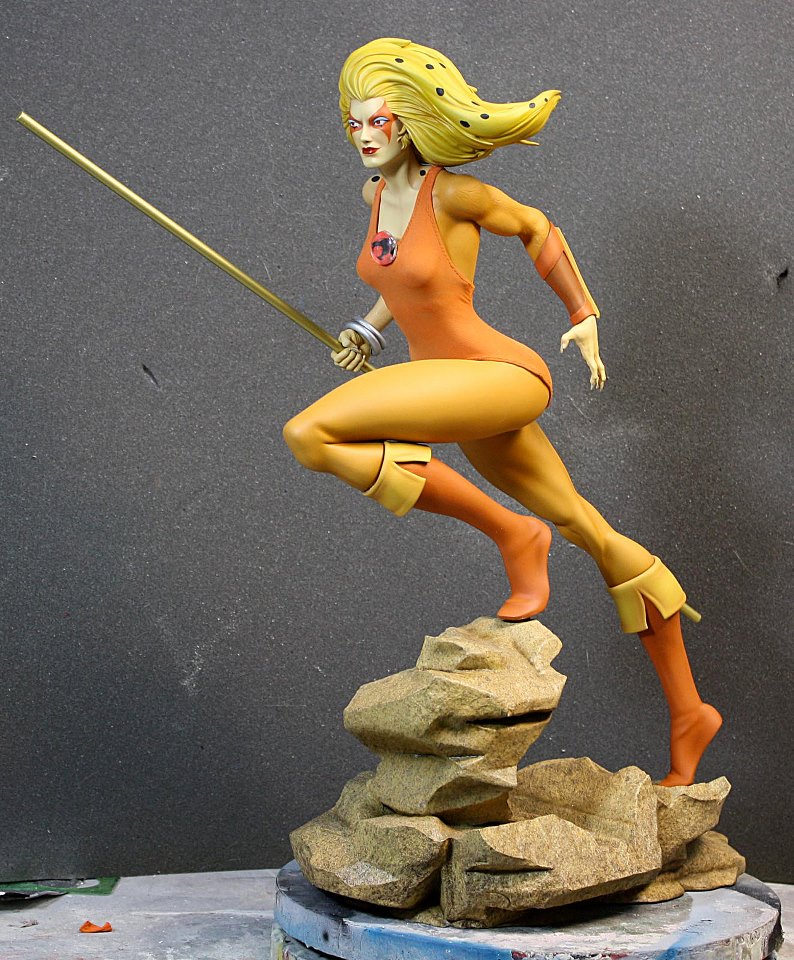 Actually, now that I take a closer look, that’s a pretty good setup for the Thundercat symbol too.

Yessss. Now that is looking super! The eyes look great!
Can’t wait for the hair to go in.

Fantastic work on the eyes, they look great so far along with everything else.

I remember your Thundercat HMC a few years back, your progress is certainly showing.

Well…
Transpose master did it’s usual butcher job on the mesh (expected),
and then failed to transfer the pose to the main mesh (not expected).
Ugghhhh so I’ve got my work cut out for me. :banghead:

On the bright side, I do like the pose.

For me , you’re not done with the head. I can still see some issue with the eyes.

Man, time is winding down. Sorry for lack of updates but work has had me swamped.

Working through the details. Lots left to do but should still be plenty of time to finish.

Wyatt, that is looking very dynamic.

Even if you don’t make the cut-off date for this challenge, I’d say this is worth finishing no matter how long it takes.

Ok a couple of FYI’s

Thanks for the heads up Roberto.

Almost done, couple of big items left: hair, hands and the scene. And many many little things which I could probably tweak for another week.

Final update. I’m probably going to revisit the hair before I forget how I did it. I got close to what I wanted but ran out of time before I could really make it sizzle.