hello all.
again, i couldn’t resist and offered help for creating images. this time they’re for an additional race for an online strategy game based on the good old VGA-Planets named Skrupel. right now it’s in german only but in an upcoming version it will feature language packs.

the race, called the High Houses, is from the dune universe and a mixture of all stuff there is, not just only one house.
the race will feature the well-known heighliners used for transporting larger ship-amounts. there will be three sizes of these, each with a different number of ships it can take with it. allmost all the other ships will be restricted in their maximum travel distance.
please note that the ingame images are at maximum 150x75 pixels large (or small) so i will keep the level of detail relatively low (maybe i’ll add more than “necessary” if it is decided to also make larger images) 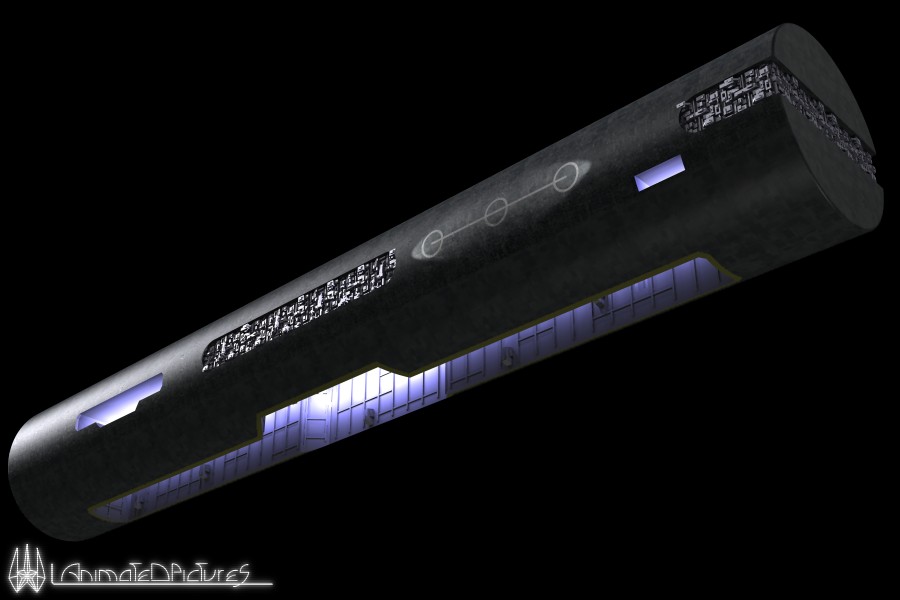 this is the smallest: 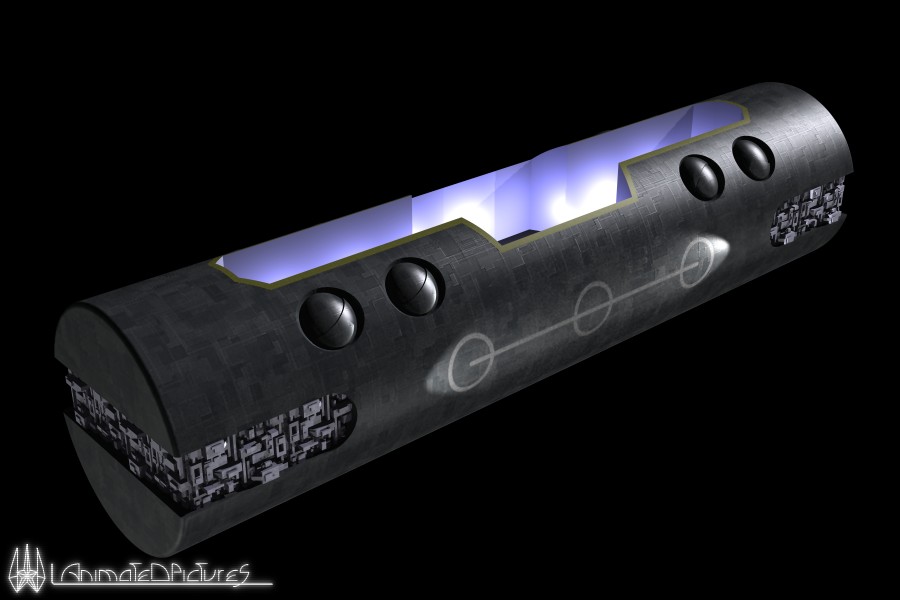 they are both not yet finished

next is the tleilax frigate. as the tleilax are the ones who do genetic engineering and the like it was decided that this ship should look organic, preferebly in the style of H.R. Giger. my initial thought was to adapt Giger’s alien design as this is the most prominent made by him.

the inset in the lower large sphere is just a placeholder and will be ribbed in the final design. maybe also glowing in some fitting color. the brighter part in the middle with these claw-like thingies is supposed to be the mechanical part of the ship. the weapons will be mounted there. i will also add some kind of wings (bat-like, fingers with some kind of skin in between).

of course there will be also atreides and harkonnen frigates

PS: if anyone has any references for all the houses’ logos don’t hesitate and post or pm them. all ships will have the house’s logo painted on them.

i made another tentacle and placed both a bit aside from the centerline and also tried to blend them more into the main hull. i think the outcome looks way better now. i also added the wings but decided to stray away from my previous post (bat-like wings) and go with my initial sketch (have no scan, sorry).
here’s the pic:

of course there will be more stuff that will hold the wings and i also will blend these “pylons” to the main hull. right now it’s just to show how it should look.

i also made a small rotation-animation (

We can’t see very well your render…:shrug:
Your Ships are realley black and you background is black too…
Try to lighten your background.
Show a “wire” too, so that we can critic the technique side.

hopefully i’ll have an update tomorrow so stay tuned.

i know there’s been a long time between updates - this one you can’t really call an update. but i am glad to have come back to the tleilax ship because in the last weeks i simply couldn’t be arsed to do something on that model (or others respectively).

as you can see i added two more supports/“pylons” for the wings and integrated the front ones into the hull. i also scrapped that half-circular sturcture with the claws wich was supposed to be the mechanical part of the ship. instead if this i wall add something that will blend better with the hull. the bright stuff in the wings and the bottom “egg” is supposed to be the engine system. don’T ask me as it works though as i really don’t know how it is supposed to work. it just has to look good

i forgot to get a wireframe shot but will get one next time.

Very insteresting designs you’ve got. I personally don’t like the Dune universe being all gothic and alien-like, but that is generally how it is portrayed.
I havent checked out the game these units are for, but they seem very high res for a free game…

thanks for your reply.
the game is a browser based one. so no fancy realtime models are needed, just some graphics

The frigate looks great, has an organic feel to it which fits well with the backstory. I thnik the only issue with the Heighliner is there’s nothing to give it a sense of scale, they’re supposed to be enormous. This would probably solve itself though when it’s placed in context with other ships. Nice work

thanks alot.
i know that the heighliners’ (there’s gonna be one more of them) scale is hard to get, especially in the final image resplution which will be 150x100px. but there will be at least one image which shows a heighliner (probably the largest one) in scale with the other ships.

the next ship i will start will be a frigate of the house Corino. since thousands of years the emperors of the known (dune-)universe come from this house. they are decadent and love luxury. so i’m thinking along the lines of the Nautilus from the movie League of extraordinare Gentlemen.

Very nice work mate. As a huge fan of the Dune universe i must admit that i like your view on things. The heighliner’s looking like a nice modernisation of Lynch’s vision (which i think is more in style of the feel of the books than the miniseries). And the Tleilaxu is coming along nicely, it’s to follow their design phylosophy from the later books where they gladly ignore any treaty involving technology, advanced computers etc etc.
Hmmm actually that placeholder in the ‘mouth’ of the ship looks good as it is, if you’d replace that with a grill or ribber area it mght become a bit too catoonesque, the placeholder give it a nice cold sinister look

thanks meph. i also think i’ll leave the “placeholder” as it is. tbh i never read any of the dune novels, i simply was given some guidelines for the tleilax ship and made them into what you see here. i’m happy that the outcome seems to fit quite good what you (and certainly others too) think a tleilax ship could look like.

i started a new ship: a frigate of the house corrino. as i said i’m going with the style of the Nautilus from the movie League of extraordinary gentlemen. i still can’t decide how the ship will be colored, though. make it completely golden like the original (from the lynch movie) imperial frigates or like the Nautilus mentioned above (white with some silver decorations).
so here’s a pic

I’d go for a very baroque colourscheme, with lots of golds and purples to indicate to royal heritage, perhaps some art-nouveau detailing?

Go really over the top with this one

thanks for your input.

i started a bit of detailing on the corrino frigate. right now i don’t know how to continue. i don’t think the detailed bit in the front part of the ship will stay. the detailing actually only looks good on that large extruded area on eiter side of the ship. but see yourself.

i’m, thinking about how to color the ship. i’d really like to make it golden but then all the details won’t be very visible. and not visible at all in the final image resolution these are made for. with silver there’s at least a hint of details.

Hmmm, very true, the gold is not so good for this ship, silver with gold detailing is better (detailing is super btw) Instead of the red i’d try experimenting with a shade of puple, which is a more ‘royal’ colour. The hull itself is looking good but maybe just a bit too smooth. Personally i’d add some detailing on the hull, either with some engraved or painted art nouveau detailing or maybe fancy hullplating, not simple rectangular plates buut some more rounded shapes that fit together (think of how a tennisball is made up out of just two shaped pieces).
Or maybe some big gothic ‘glass-in-lead’ windows of a fancy observation deck/chapel/ballroom. After all it’s also a ship that might be used to impress visiting foreign diplomats as well as intimidate them

thanks meph. you gave me some ideas to think about and play with. i’ll see what i can do.

long time no update i know, but finally here is one

though not on the corrino frigate. but it will be continued i promise

i started a model for the atreides frigate. originally i whanted the ship to be a white/light gray with red wing patterns. but as some people in another forum said that the atreides were said to have greenish uniforms in the novels and thus suggested the wing pattern to be green i gave that a try.
i have made up a comparison of the different color schemes. see for yourself and tell me what you think fits better.

The dark one with the green is definately looking better imho.

Just an idea, perhaps try bringing out the feathers on the wings by extrruding them or cutting them out to crate a real 3D structure. That would be moch more in feel with the baroque style of the Dune universe. If you’re rendereing with Vray it’s possible to use a displacement map that only activates during rendering, I think with other renderers you’re bound to have to do it on the mesh.
Or maybe subtly try enhancing it with a bump map but it will be less crisp that way

Honestly, I think it might help improve the model a lot, right now it’s looking a bit ‘flat’ (the curve of the vessel is ok, I just mean the detailing)

maybe you can see the small rim around the feathers. right now they are simply painted onto that elevated surface. i thought that would suffice but i see your point. unfortunately have to model them (well, a bit). i have a way to use a displacement map though only for “flat” surfaces. it’s a heightfiled that can be used for creating terrain for example. so it can’t be used for that curved surface. won’t be hard to create only the rendertimes will increase (quite a bit). but don’t expect each layer of feathers to be on a separate “height”-layer

Indeed, good point, a displacement map on a curved surface is not that evident.

I just got another idea, instead of increasing render times with modeling why not simply use a specular map so that only the green feather themselves are shiny and the division lines are matte. You could even have some small sublte variations on the feathers themselves to give them more depth.
I don’t know if you’re familiar with using specular maps or not but it’s exaclty the same idea as for bump mapping, just a B&W version of the map where white is shiny and black is matte and put that in the specular slot.