A couple of weeks ago, a thread on CGTalk prompted a complete rewrite of the DIMaster script originally written for Max R2.

You can check out the first images from DIMaster v2.0 here:

So far, it provides a flexible and fully functioning Dimension Line tool (replacement for Tape Helper) and an Angle tool (replacement for Protractor Helper). Both are fully interactive, animatable and renderable systems which also provide local and global editing capabilities for changing the complete look of a whole drawing in seconds.

WOOOOOW! Man I didn’t even know about the original DIMaster! You’re so full of great surprises! Need I say that this will be extremely usefull?!

i never felt good about world units and generic units , they just keep confusing me

when should we expect that to come ?

Great stuff, thanks for your effort! Can’t wait to play with this.

This should come in handy
Great work as usual Bobo

i never felt good about world units and generic units , they just keep confusing me

when should we expect that to come ?

I hope to post an early version today or tomorrow, depending on how much time I have to tweak it - there are some things I would love to add to the basic tools like the option to enter a custom angle and project a point at a specified distance so the Angle dimension could be used as a construction tool, too…

Did I mention it is free?

Awesome Bobo!
Thanks for making this available to all…you are da’ man!

This looks like a complete tool for the job! I’ve read the description and it’s a very well designed script - flexible yet easy to use. That’s great!

Since you’re still developing it might I add one sugestion? It’d be nice to have control over the precision of the measurements. For example instead of showing “40.6013 degrees” for most people “40.60 degrees” would be enough.

Great job, looking forward to it!

Did I mention it is free?

not clearly , but posting it in Boboland indicates it is

Since you’re still developing it might I add one sugestion? It’d be nice to have control over the precision of the measurements. For example instead of showing “40.6013 degrees” for most people “40.60 degrees” would be enough. 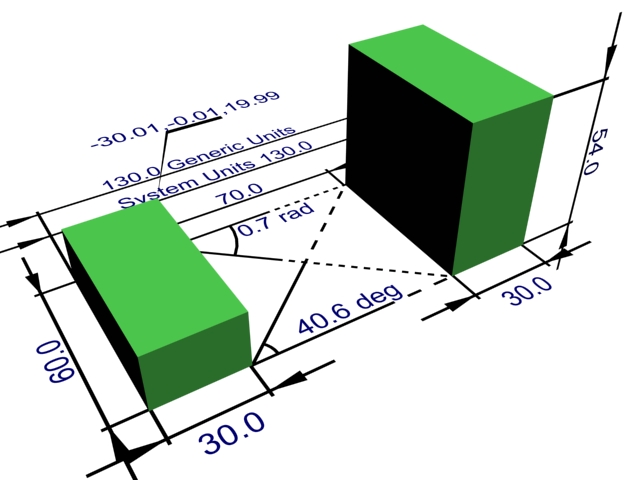 Added note tool, decimal precision (see angles), dashed extension lines in the angle tool, and constructors for both line and angle so you can use them to measure WHILE drawing.

When I saw that this thread was started by you, I knew it had to be really cool

Thanks a lot, Sir: just in time for my project.

My site, when it is ready for testing. Still tweaking it…

My site, when it is ready for testing. Still tweaking it…

Beta 1 of DIMaster v2.0 is ready for download.
Please remember it is still work in progress and might be buggy.

Written in 3ds Max 9, but tested briefly in 3ds Max 7 and 8 in DirectX mode.
Documentation is still not available, please play with it to figure out how to use.

*Each dimension object consists of 3 types of elements - two or three point helpers, a custom plugin object drawing the lines and a regular text object with mesh_select for meshing on top. These objects work as a system controlled by the custom plugin. The helpers control the placement and functions of that plugin, and the text is being placed and updated by the plugin. Deleting any of these elements will make the system to stop working, but there should be no errors. If there are, they are bugs.

*The black custom element (line, angle, note line) contains all the controls that show up in the Command Panel. If you want to change parameters WHILE moving the helpers around, be sure to PIN DOWN the stack so you can select other objects while the custom plugin is shown in the Command Panel.

*In the case of the DIMline, the up vector can be specified as the X, Y or Z (positive or negative) of the main (red) point helper. You can change or flip the axis or flip the text horizontally or vertically if the current view shows the system from the back side. While DirectX will show the back side of objects in black, they will still render in the assigned color. To rotate the DIMline at any angle, simply rotate the red helper.

*In the case of the DIMangle and DIMnote, the “up vector” is the normal of the plane defined by the 3 point helpers.

*In the case of the DIMnote the blue point is linked to the green point and the green to the red, so you can manipulate the chain at any level you like.

Remember that the text objects displayed by DIMaster are regular text shapes, so you can change the font in the base object as usual. I added tools to propagate the font of the current object to all visible objects of the same type in the scene, and to pick the font from any other DIMaster object. You can assign materials as you want, but the objects will have default materials assigned to them and instanced accross all DIMobject. so changing the parameters of one will change all. If you replace the material manually, the change will be local.

If you want to give the scene to somebody who has not installed DIMaster v2 yet, you can collapse all DIMaster geometry objects to editable meshes. Of course, this will remove any interactivity and freeze the dimensions, but the scene could be opened on any machine after that.

I left all parameters animatable at this point, even if they don’t make much sense to animate in most cases.

Just a note that since I first posted the Beta 1, I updated the ZIP file several times with new versions of the Note tool. Last update was 0:25 am CT on 2007/04/08. I am going to bed now, if you downloaded an earlier version (without arrow support in the Note tool), please make sure you update your script to the latest one.

It’s a great script and it’s perfect for some of the architectural work I do. The only issue is that it doesn’t operate very well under realworld scale: feet in decimal inches. The only room I see for improvement is to tweak the default values so it requires no adjustment after a helper is created. For now though, cloning a configured helper works like a charm, and it looks real spiffy.

first of all and most important: THANK YOU

DIMline works as expected … DIMangle gives me this error
–unable to convert: undefined to type: Float

whenever i use the tool and click into the screen … ???