I am trying to vary the color along the tentacles of a cell from green at the base on the cell to orange at the longest tentacles tips. So far nothing has worked. I saw in the Cycles Webinar how you can change the color depending on the height of a clone but this is not a cloner object.
I’d post my file but it is too large.

How can I set up my nodes so a gradient flows from bottom to top of projections from a sphere?

I assume Cycles4D has the Geometry node or equivalent? Then it’s just a case of mapping your colour gradient via a spherical gradient texture. 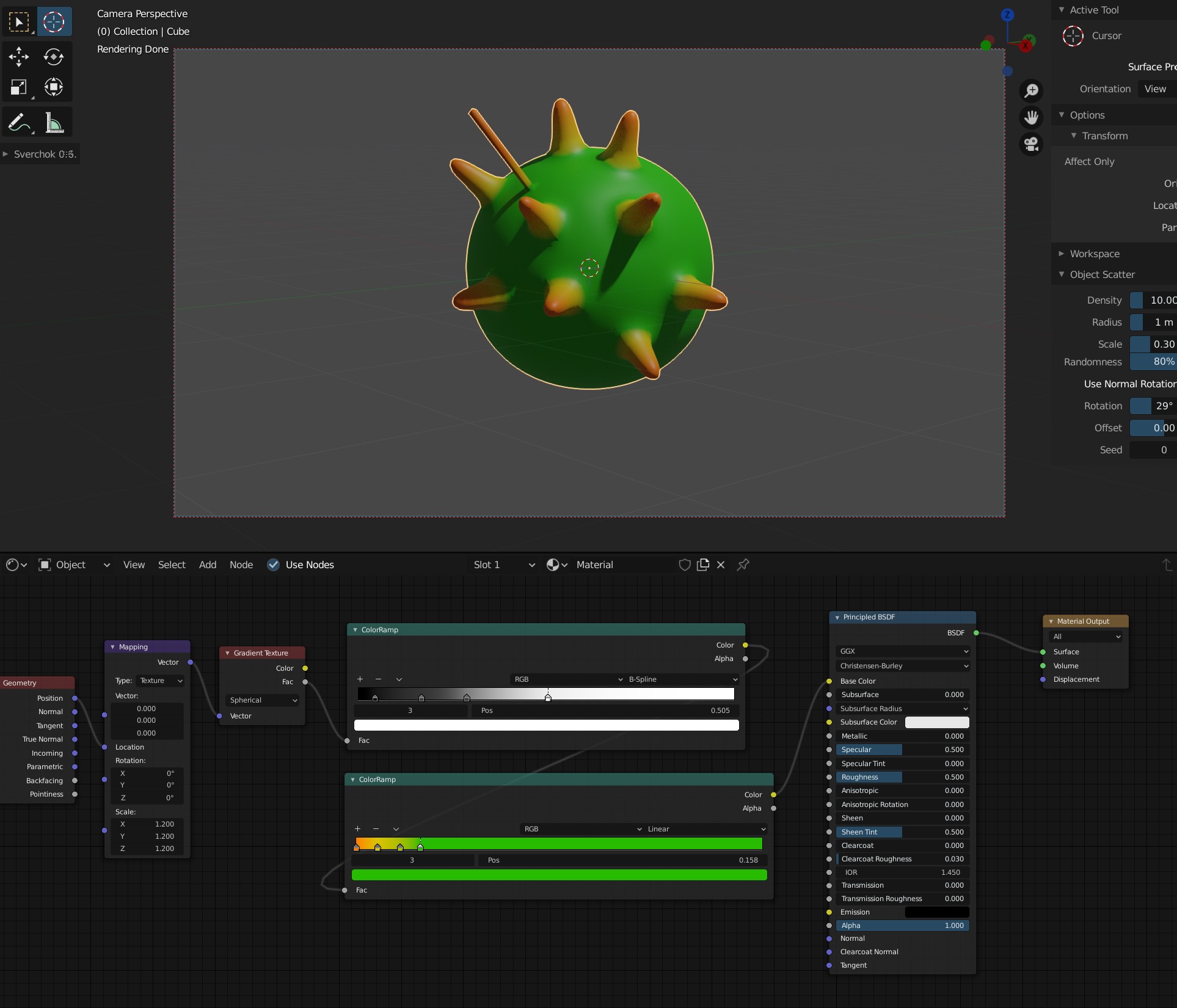 You are very welcome. I updated the nodes to give you a bit more control with the gradient.

Cycles4D is an excellent renderer, there’s loads of power in those nodes!

The Incoming vector will give you hours of fun.

I am back to having fun with this technique thanks to you. Are you using Blender, I see you are not in Cycles 4D?

I really wanted to get this without having to make a vertex map and using that.

With the above technique the Spherical gradient node is just outputting a greyscale so you can also use this to drive any other material parameter like roughness or use it to mix between an RGB Mix node or even mix two shaders to give your tentacles a slightly different material to the main cell body. The Geometry node unlocks so much potential!

I’m glad I could help. If you have any more Cycles based questions I’ll do my best to answer but I’m a relative noob. I do recommend watching as many Blender tuts as possible as Insydium have done a good job of bridging Cycles which means there’s a 1:1 relationship. Blender has just got a few more 3D noise nodes which are incredibly useful that I’m sure Insydium will pass on to you in due course. RTX support has just arrived so that will be coming. Exciting times for Cycles4D users.

I have watched several Blender tutorials and they have helped.
I am starting to feel empowered with some wonderful new tools. You have taught me a lot, thanks!

Here’s with some SSS. I am getting hooked on Cycles! Now to move to organic colors. 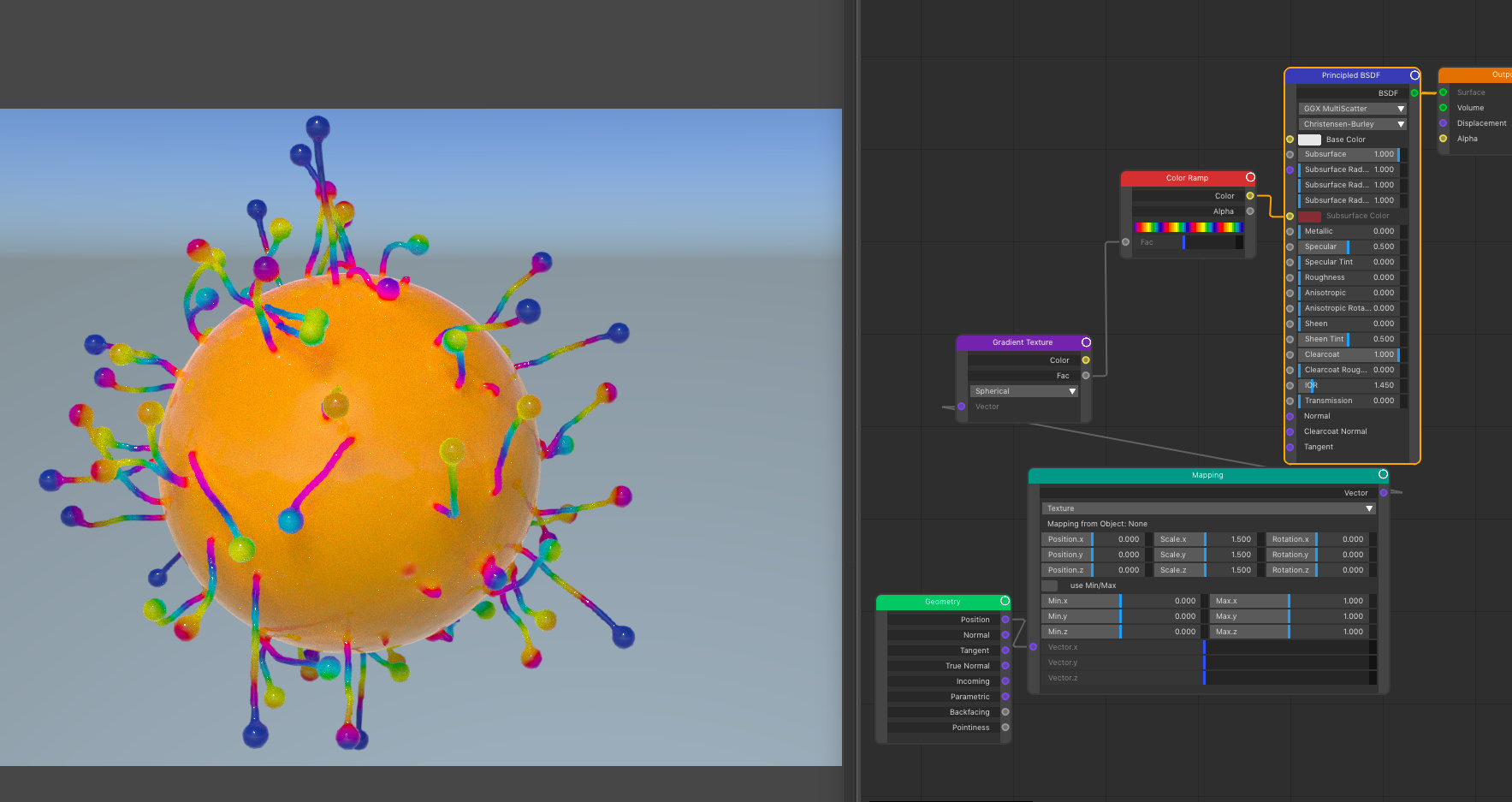 Here is payback for that great technique you taught me! (Even tech support told me that was impossible) Just go into xpOVDBMesher under Tags and check Use Point Color. That creates a vertex tag. Then drag the vertex tag into your node window and an Attribute Node with the correct settings is formed. Then set up the nodes as desired. 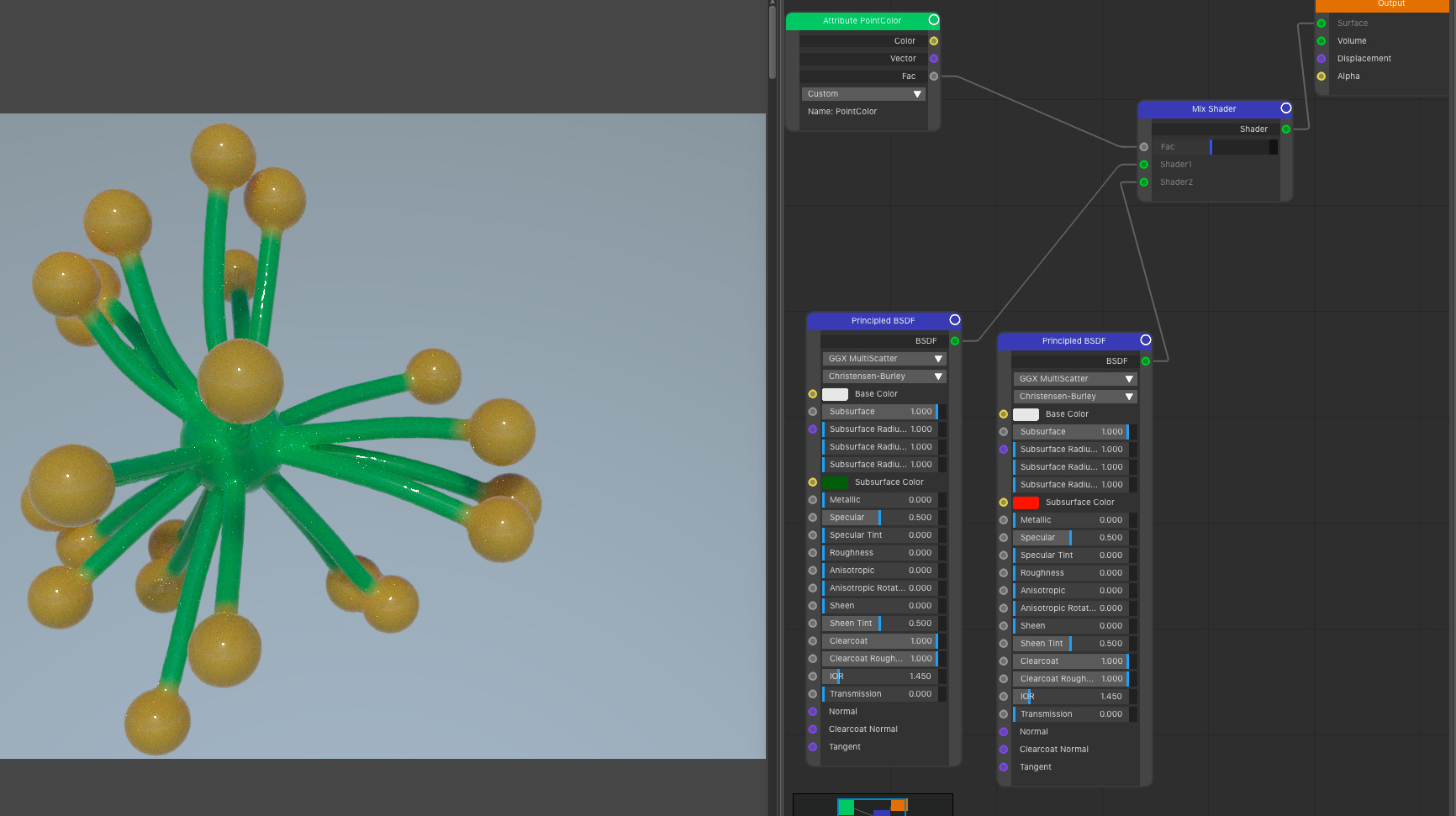 Both techniques have advantages, the vertex tag version would be better suited to a ‘hero’ object close to camera that is deforming as the colour would be stuck to vertices.

The spherical gradient version is just remapping a 3d gradient based on distance so if the ‘stalks’ were animated they would swim through the colour and it wouldn’t be fixed to the surface. It’s good to have both methods in the armoury.

I’m really pleased to have helped, I cannot take the credit I learned it from a generous Blender user. I don’t know who it was but as soon as I read your question I knew how to do it. So some of the gazillion Blender tutorials I’ve watched have actually sunk in. Glad to act as a conduit in this case.

This last month of watching the amazing #nodevember creations on Twitter has taught me that literally anything is possible with Cycles, genius level users are able to create a 3d field of sunflowers on a single plane or a fully animated animated robot with laser spitting eyes from one cube by the power of Cycles nodes. I have new found respect for Cycles and a wish to dig much deeper because it’s an absolute goldmine.

“Day 11: Metal This is the default cube with one procedural shader and vector displacements. #nodevember #nodevember2019 #b3d https://t.co/OZVmeALmMf”

I am a little obsessed with it lately myself. It is so powerful yet generally really intuitive.

Your note really nails why it is good to have both techniques.

Again, you got it when tech support said it was impossible. Thanks.