Background: After not opening Max for seven months, I decided I needed to get back into the scene or risk falling behind professionally. I figure by creating a work-in-progress thread and updating it in my spare time, I could work on a character that would result in something I could place in my demo reel.

Type: Prehistoric mammal
Size: 1.8m high at the shoulder
Diet: Herbivore
Lived: Late Eocene and early Oligocene, from 36 to 30 million years ago in what is now Ethiopia

Arsinoitherium’s most distinctive feature was the two large horns on their snouts. The horns were hollow and possibly used to produce loud mating calls as well as to compete with rival males. Arsinoitherium was a hefty creature with thick, hairless skin resembling elephant hide.

Arsinoitherium was very selective in the types of fruit and leaves it ate. Its size meant it had to eat a lot of food - it probably spent much of its day chewing on something.

Arsinoitherium lived in small groups and would have been in the water most of the time. It couldn’t straighten its legs, suggesting they were better for wading and swimming than for walking. Its large size kept it safe from most predators, although creodonts might tackle a young Arsinoitherium. 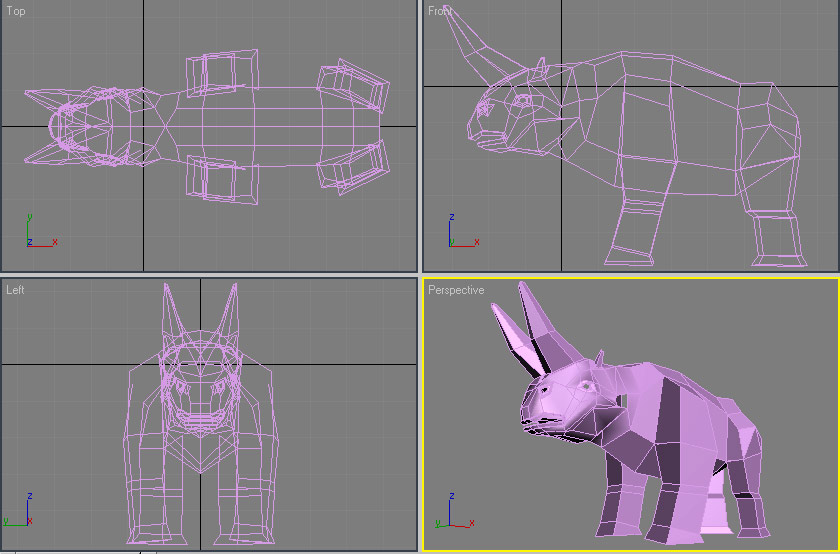 Not much more than a box with legs at the moment. My references for this animal are quite old, so I’m basically going off a skeleton and hope to texture and animate it using a rhinoceras for reference.

Will the detail be in the model, the texture, or both?

Will the detail be in the model, the texture, or both?

I am aiming for a medium poly count for the mesh; just enough to achieve articulation at the joints, mouth, and eyes. I want to texture the beast at a high-resolution, enough so that I can render XCU images of the head. The plan is to also dummy-down the high-res texture for wider angle shots, maybe down to 512x512 at a distance.

I know that I’ll be relying on displacement maps for the rhino-skin texture. Going to the trouble of creating normal mapping won’t do much good here.

Based on your previous work, I am going to vote this thread a pre-emptive 5. 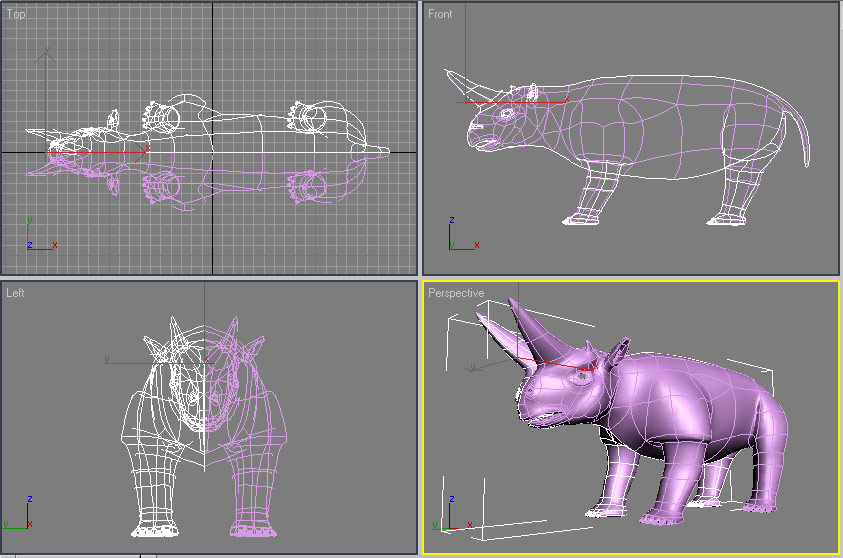 I’ve made the animal more stout, such as a rhino stands. 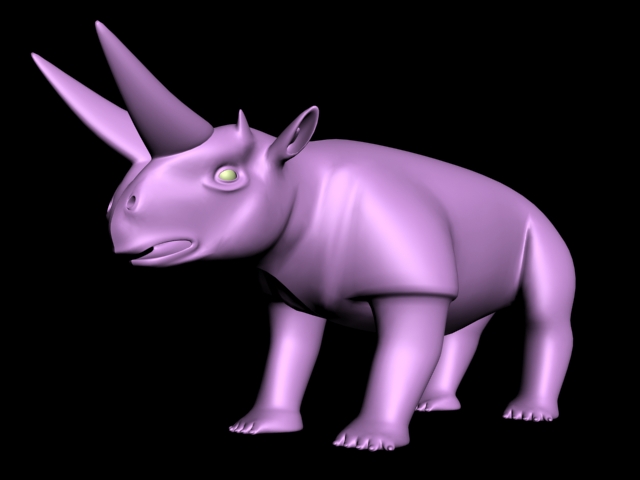 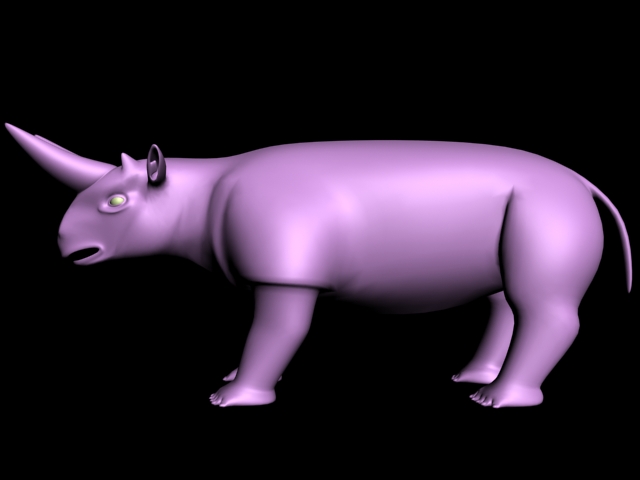 So here it is with 2 iterations of meshsmooth, 8600 polygons. Now I want to weld the two halves together and texture this, what do you guys think?

Skull shape is odd. The jaw is thin. The horns look as if the cross section may be more eliptical than circular. Model the upper eyelid and tuck it under the brow. Tail should be thicker at the base and taper at the end. The connection between the hind leg and body is sharp. Since both the front and rear feet are ahead of the shoulders and hips, the balance is biased more to the rear.

Thank you for your focused insight, marc001. While I agree with most of what you’ve mentioned, the fact that the mammal’s feet are in that position doesn’t affect much since it will be rigged and posed in a more natural stance. As for the horn shape, I guess I should post my reference skeleton, which I’m basing all my modeling from: 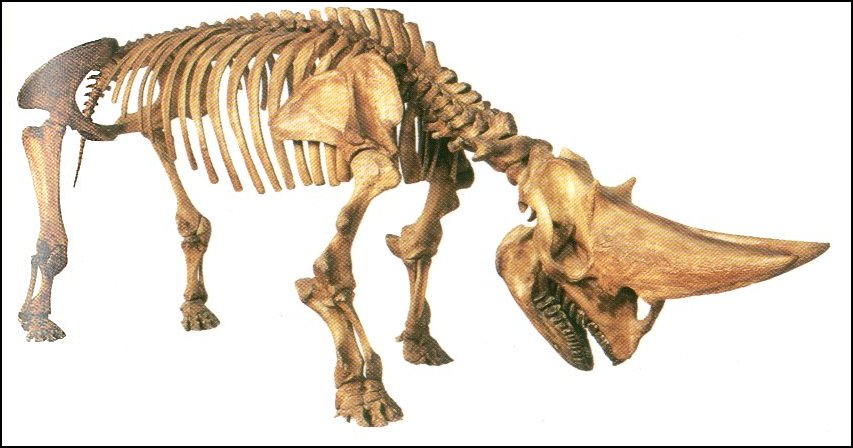 The lower jaw could certainly use some work near the front. I’ll also taper the tail shape so the base is wider. Anyone else want to chime in? 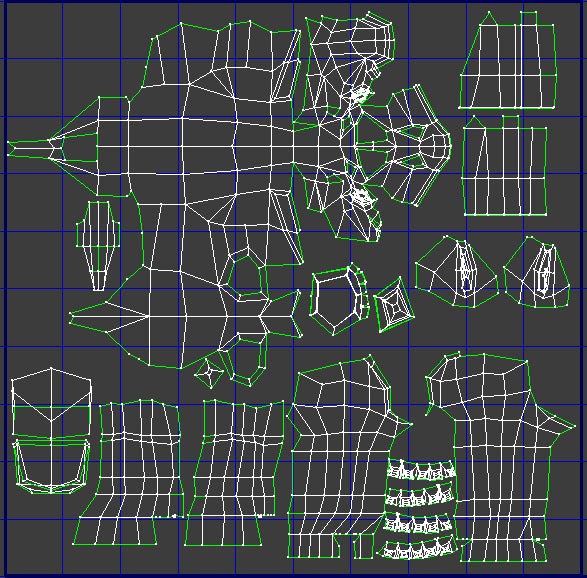 uvw.jpg587x578
Take a look at the head. I’ve managed to unwrap the face decently, but welding the verts together isn’t possible without stretching the unwrap coordinates. See how the lips aren’t connecting to the corner of the mouth, and the bridge of the nose is not connecting with the cheeks under the eyes? I might be able to sneek by this problem by paying extra attention to the texture. How would you go about this dilemma? 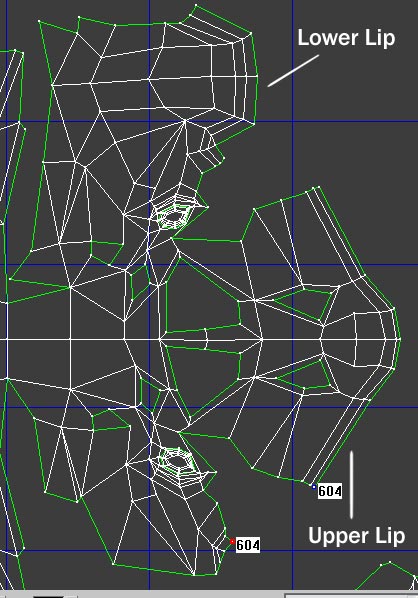 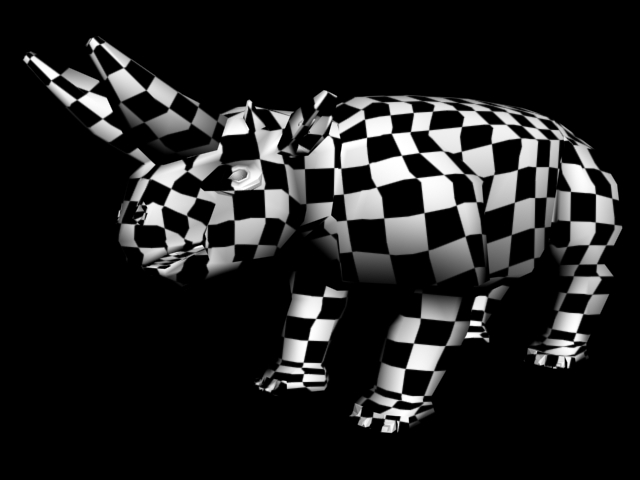 I threw the procedural checkers on the mesh to show the wrap. As you can see, it’s not perfect; it seems I’ve paid little attention to the feet. Any suggestions, comments, questions?

If you layer another UV chanel on top, you can paint another texture on top without distortion.

If you need to export it to a video game that doesn’t support layered textures, and UVs. , bake the texture so it’s one single sheet of textures.

I added a biped to the mesh and started rearranging the bones. 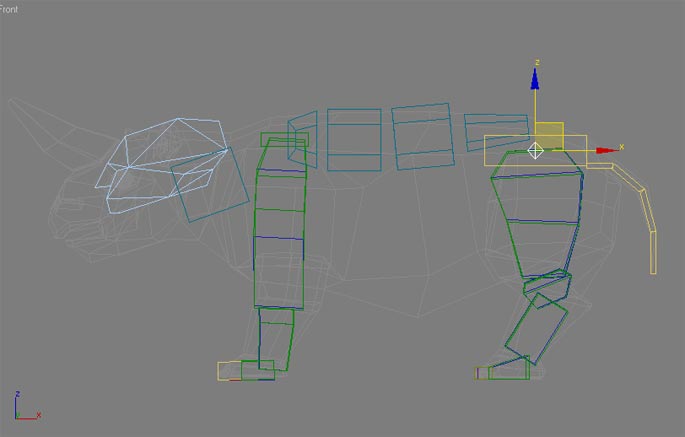 It’s been awhile since I used Character Studio, but it doesn’t look like I’m going to be able to get all the bones in the right spots (so I can have an easier time enveloping with Physique or Skin). Maybe I can add some Bones in the jaw region before I use Skin. How are characters rigged with a biped that need to move their mouths usually get rigged? Morph targets maybe? Then there’s the issue with the spine segments; they won’t influence the belly without some serious envolope adjustment. Really not sure about how to handle this.