Haha, I like most of Fellahs ideas as well, just gotta find a way to do something similar without camera change, and without changing the geo of the main structure. Will post an image why

- the biggest problem is, it’s a big scene, slow to work with and prone to crashing recently… But I may be able to do some photoshop trickery, add some lights, etc.

just ideas presented with a shitty overpaint, pick one or none, i don’t care as long as you don’t hate me

Haha no way gonna hate you for that, that’s the point of the challenge, to push each other to do better work, isn’t it?

That’s how the wireframes look… heavy. And all that growth is not dynamic - for stability reasons :(. The trade-of is, it renders predictably - which is not always the case with displacements on lower-rez meshes. Besides, I need the high-rez mesh for growing the vines, not low res cage…

This is all just an excuse to avoid re-modeling

- it’d be way too painful, and this is supposed to be fun.

Now here’s the revised version - tweaked the colors (got rid of the reds on the main structure, made the warm parts more contrasty, etc. Generally tried to put more focus on the fleshy parts of the structure by using light and colors/saturation, instead of showing it from below - changing the camera breaks the whole scene

). Added some passes of subtle fur, some additional reflections, reintroduced some of that dust/debris/bugs/spores, heightened some background structures (That at least was easy, as they are lower rez versions…) and some other things I now forgot, but which are visible mostly 1:1. For now, the character is untouched. Hopefully I’ll have time to tweak the pose/silhouette a bit, but in the end, won’t flip him - I kinda like that he looks outside of the image, like there’s something even more interesting just out of sight - just to stimulate viewers imagination a bit.

Strangely enough, the crashing is gone - seems the cpu was just overheated

Thanks guys for the comments, much appreciated.

waw I wouldn’t want to mess with that mesh either!!

looking really nice now! no need to change the camera. my only suggestion would be to make the structure to the far left a bit taller than the one to the right of it, to keep the viewer from falling out of the composition.
agree it’s a nice touch to have him looking out of the scene to! looking forward to see this one in full res someday to be able to take in all those lovely details!

So this is almost there - I’ll wait a bit, maybe I can think of something to add. But even if I don’t, I’m happy with the way it turned out.

Would it be ok if I make a paint over with some small suggestions?
It’s looking awesome.

Sure! I can’t promise I’ll implement it, but go ahead :).

I though that another “layer” of vegetation closer to the camera would help give more perspective and even drag in the observer into this nature. I see this beatiful landscape and I almost wish I was more inmersed into it. It also feels like we see no beggining or end this way, instead of having it presented in a more “general view” style.

Either way it’s looking great, I think it’s the best I’ve seen so far in the challenge! Cheers! 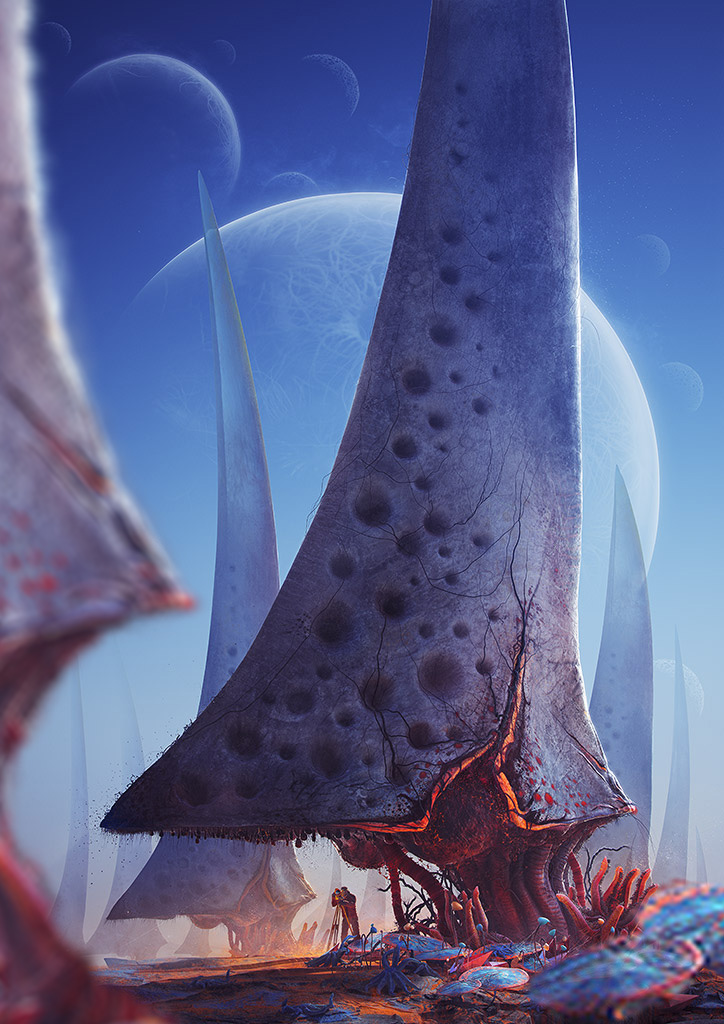 I see what you mean. I’ve had this comment from other sources as well. The way you did it, it messes the count of things - ten of those big structures, ten ‘mushroom’ plants. I’l see if I can get this result with some other objects. Thanks for the feedback.

Oh I see, I didn’t realize there was 10 of each.
I love the atmosphere you generated in the image, and the guy taking a picture was a really clever addition to add a sense of scale (and it also adds to the marvel of the whole place).
Definitely my favorite piece so far.

Added some foreground elements. Not sure yet if I like them.

better without, imo. it “closes the image”.
maybe if the FG elements ran into the image rather than flat. but i doubt it.
anyhow merry christmas!

It kicks some major… . As always, as always.

On fourth look- I think there are just too many planet shapes. I understand you are not really aiming for physical accuracy (and I am totally fine with it) but they seem to clutter composition a bit. Just my 3 c.

But the 10 moons are one of the points of the image ;). They stay. Anyway, thanks everyone for the feedback, comments and crits - much appreciated. The final entry is here:

Not much changed from previous version - just decided to go with ‘open’ composition. Good luck to everyone.

Congratulations you did an masterpiece! So nice and when you look close you discover more and more detail on the story.

Gorgeous piece- I prefer the ‘open’ view, too, good call there. Good luck!

In the end, this worked out great. Some of the best use of 3D I have seen in a 2D image. It is blended with the painted elements (the camera man) perfectly. Bravo.

In the end, this worked out great. Some of the best use of 3D I have seen in a 2D image. It is blended with the painted elements (the camera man) perfectly. Bravo.

But… but… the camera man is 3d as well, actually everything here is 3d. Only 2d stuff here is smoke/atmosphere.

Great job , azazel! A winner for sure!