BEGINNERS' Drawing Workshop - Drawing on the Right Side of the Brain

Good to see your posts, and it was also interesting to read your blog on the subject. Looking forward to following your progress here.

I just finished reading the chapter on childhood drawings. I can’t remember how I drew when I was really young, but I do remember some of the things I did when trying to achieve realism during my adolescence. It’s a great chapter and I got a lot out of it.

I’ve also tried two different upside-down pictures, but haven’t finished either one. The first one was the Picasso on page 58. I did about 25% of it and realized that my lines were not even close to being correct. The second was the horse and rider on page 64. While doing that one, I realized that just looking a single line and trying to copy it wasn’t good enough. I started looking at the shapes of negative space and angles between lines, which helped a lot. I did about 50% of it and it looks pretty good. There are minor discrepancies, but not enough to throw off the entire image.

I’m going to read the next chapter and then go back and finish the horse and rider image.

Thanks for all your doing, in this thread and the rest of the forum.

You’re welcome! The upside down Picasso drawing is quite challenging, and don’t worry if you have to attempt it a number of times. Keep going! The exercises are really useful and do pay off, as you have been finding.

In order this is what I have so far… I never got around to doing my self portrait on the first exercise. I had to stop at the first viewfinder exercise because I draw with my Intuos3 and I am not sure what I should do for that exercise.

Here are the rest.

I know I’m late but as I understand it, it’s no problem to join even now.

Just something about me. I’m actually a programmer and I’m just starting doing some 3D as a hobby. At the moment I’m trying to model a head from reference in blender and fail big time. I came to the conclusion that I don’t see correctly. I knew already having a good foundation in drawing helps your 3D skills alot. I never considered myself being good at drawing at all and my results always proved that. So I ordered the book just a day before finding this thread. Joining this thread will be good for my motivation and to get crits and hints of course.

Something interesting: I’m left handed but write with my right hand - not because my teachers forced me (I’m thirty, so I went to school at a time when writing with your left hand was already accepted) but because I wanted to do so. Looking back now I think the wish of not being different was the main reason for that choice, I would have been the only one in my class. I do almost everything else with my left hand, playing guitar, holding the billard cue etc. I use the computer mouse with my right hand, though
and I used to draw with my right hand
that’ll become an interesting point soon.

This was all done today. 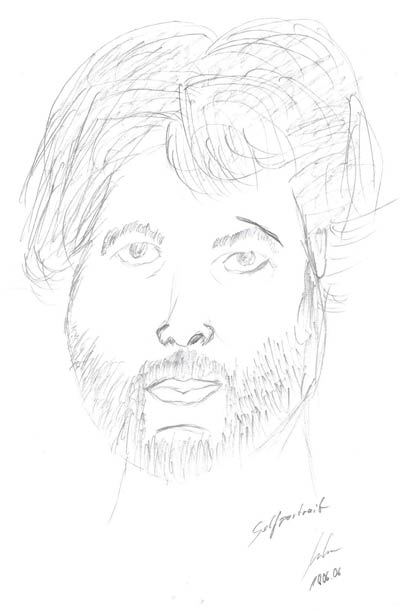 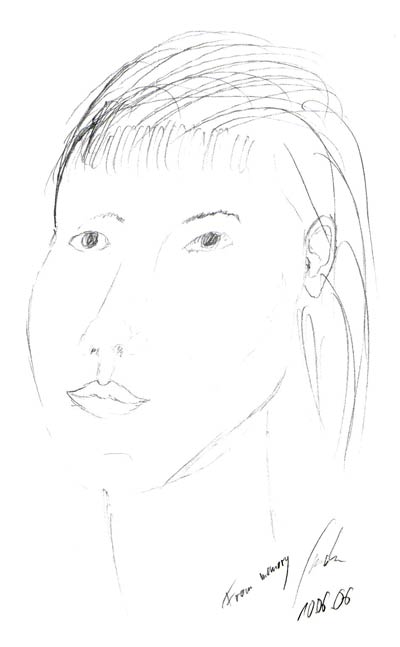 2.jpg400x647
I won’t tell who this is supposed to be
wouldn’t be too good for my health

not recognisable at all
well, it could be human 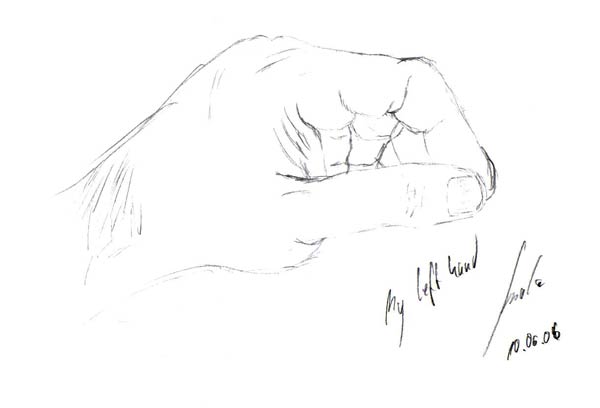 After that reading on in the book Betty Edwards talks about left handed and right handed and the struggles of writing with the “wrong” hand. She suggests to try drawing with the other hand as well, so I drew my right hand: 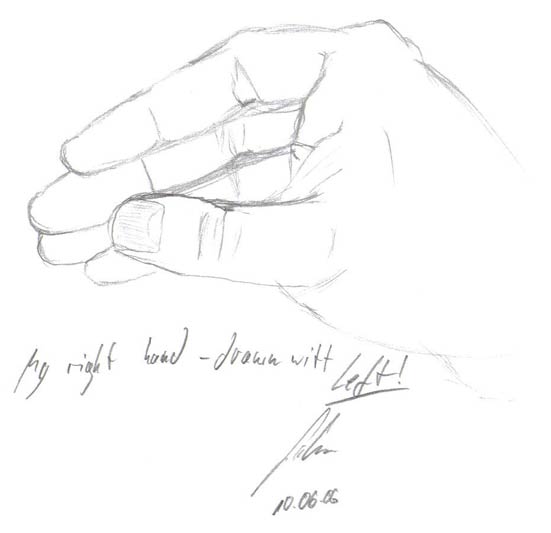 4.jpg551x533
I started with the thumb and you can see how I struggled at the beginning but it became easier with the time… I’d say proportion wise this is better than the other hand drawing.

One interseting thing I noticed was, that drawing with the right hand it was much harder to stop drawing a line even if I saw at once it would go in the wrong direction/have the wrong angle/curvature whatever. Once on the path I “had” to finish it against better knowledge. Drawing with the left I didn’t have these problems at all.

Therefore I did the vase left handed: 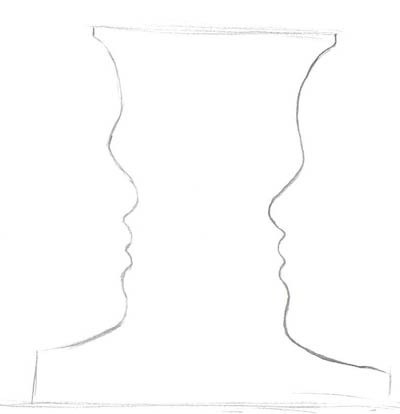 That was really easy. Although I followed the instructions carefully no feeling of transition nor any sign of struggeling showed. I was a bit disappointed by that.

So I did it again with my right hand: 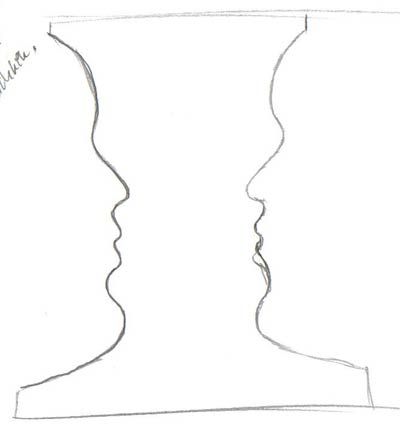 Now that was quite a shocking experience: First, it was slightly harder to get the shape right but it still went ok. After following the first line saying the words I started copying the shape to complete the vase. At the beginning it went very fluenty but when I was drawing the lower lip it just went out of control. You can see how I drew it too low first. So I had to stop there. From that point on, I wasn’t able to continue drawing for at least 3 minutes! It was simply impossible. I looked at the lip and the chin and how it was formed put my pencil down
and couldn’t move my hand
no kidding, I’m serious about that. I think I tried to continue drawing at least 10 times without being able to move my hand at all once the pencil touched the paper. I started laughing… then at some point I just concentrated on the curve that forms the chin and eventually could finish that thing. This was a fantastic experience
simply amazing
I just had paralysed myself with a simple drawing.

At that point I was sure to go on drawing with the left hand. So from now on, everything will be left handed.

So here’s the topdown drawing: 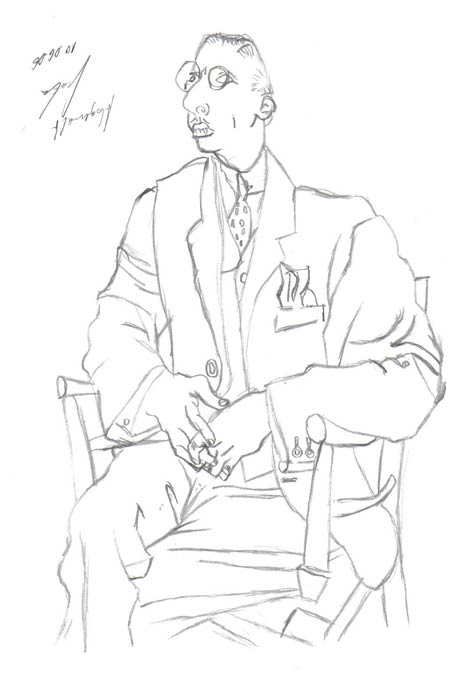 7.jpg450x678
I think I spoiled that a bit for me cause I read this thread before. So I had a clue about what I was drawing except for the legs. And I’m impressed by those… just as it is mentioned in the book.
From feeling I’d say it took ages. Hardest part was to keep my left hemisphere to shut up. I thought about everthing, writing this post, talking to my girlfriend, etc… I listened to music but had to switch to strictly instrumental songs as I focused on the lyrics and sang along in my mind

All in all I’m totally fascinated by the book and the approach. I’m really looking forward to the next steps
and need to keep patience. I’ll do the horse drawing next.

So sorry for that huge post. But I had to write down my feelings about this.

You should take a peek at Lyneran’s Anatomy Thread:

She has some wonderful Loomis studies there, and has made amazing progress!

I checked it out and you’re right! Amazing work in there. I’m really enjoying this side of the forum as of late Rebecca!

First of all Hello everybody!

This workshop sounds great. I purchased the book today and when I’m back from the festival I’m gonna beginn with the first exercise righht away.

Maybe I can catch up - even over a year later

Ah great, someone else. This thread seems to be a bit slow at the moment…

I advanced some steps further in the book… need to scan that stuff and post it here though.

Good to see these! Keep going, and continuing with the exercises. You may find it useful to come back to the beginning ones once you have completed the series.

Hi there, it was quite interesting to read your thoughts! My apologies for a late reply, but this thread is more or less unmoderated ~ though I do try to check in from time to time, I think mainly it’s a place to interact with other members and to keep oneself accountable to the exercises. Your work looks good so far and I would definitely encourage you to continue with the next chapters. Looking forward to seeing your results.

I think you may have replied on the wrong thread

nevertheless, it’s great to see you have checked out Lyneran’s thread!

Hey there, welcome aboard! This thread is ongoing, so just start at the beginning, and post your exercises!

Ah great, thanks for the reply, Rebeccak. Yeah I know the thread is unmoderated.

I went on in the book up to the chairs now and did some chairs (negative spaces), but I want to keep this slow and not rush through it. I will scan what I did and post it here. Unfortunately I don’t have time to draw every day.

About my thoughts: I have to admit, I switched to right hand drawing again, drawing with the left hand was simply too laborious as I am not used to it at all.

LOL, I never would have thought about how confusing this might be for an ambidextrous person. I hope you don’t draw yourself into a state of total paralysis as a result of Betty Edwards’ exercises.

No problems about timing, feel free to post as you can. This thread will more or less continue indefinitely. I found the book invaluable when I read it (in it’s first edition, lol) and it’s cool to see how it’s an enduring classic.

Using the plotting-grid technique in the book, I decided to experiment by using Richard Hatch from Battlestar Galactica.

You can still just see where I had drawn the lines in. This was the result of three nights on-and-off work.

I think you’ve done a really nice job with this drawing, and ought to join in the most recent Workshop:

Additionally, you might wish to start your own Personal Anatomy Thread:

I encourage you to look at other peoples’ threads and to see what they’re up to.

The workshop for 50 heads is bit much for me at the moment(Uni work, full time job etc), but I shall definetly set up my own PA thread - thats definetly something I can do!

Once again, thank you.

Hi everybody! I’ve been eyeing this thread for too long, but just coulden’t get myself started. So, it’s about 6 AM and I just finished the first three drawings:
b[/b] The second drawing is supposed to be my mother, I haven’t seen her for about a month and wanted to draw her.

Not bad try. My advice( as a fellow begineer, of course ) is to carry on with the exercises in the book. Section 4: Crossing Over, in my opinion, is the biggest turning point for you - though you may not think it. You’ll do just fine if you keep it up.

Welcome to CGTalk and to the Anatomy Forum!

I hope to see your progress here!

Boone - Yeah, but I will most likely post the exercises as I finish them (I feel less confused that way).

[left]b[/b] Wow, this drawing came out a little wrong, but much better than I thought it would

Well…I just got the book a few days ago and decided to have a go of it here on the forum. Hopefully I see massive improvement in my drawing ability.

Here is me in all my glory…lol

This is my hand holding my sketch pad…looks a bit deformed to me.

I had to stop thinking about the drawing and the parts of the face, I concentrated on mimicing the line and this was what I got.

This is my best drawing before doing any of the book. It is supposed to be Tom Welling on the Season 4 Smallville DVD Box cover.

I was totally amazed at how this one turned out. Until I hit the face and started recognizing what the lines were, then things got a bit weird.