Anyone that wants to join: HOMEWORK project for this week COMPOSITION

Ok though not as direct as giving you a crit on existing work I wanted to throw something together quickly at lunch to see if you and maybe others are game!

The idea is to get everyone starting around the same place here in the forum.
The first thing is just to refresh and remember some of the tools used in composition to build strong images
I have about 50 rules but not enough time to get into all of them. Lets start with the first 15, 20 everyone
is familiar with and over the next few months get more sophisticated.

This Month lets talk and focus on Analysis. It’s Important that you don’t cheat yourself and follow the steps.
This is all basic stuff we all know but this will help me help you better than just a blind crit.

There are 2 stages to this homework

I would like you to think of one of your favorite shots from a film, photographer or artist that
has stuck with you for several years.

Then sketch it out quickly from memory if possible. If you need to throw up an image and sketch over.
The Idea here is not about draftsmanship or how well its painted. I want you to figure out what is going
on that makes that image appeal and if there is a way to rip off that artist in your own way by
understanding the methods or repetition in their approach to picture making

This shot is from lawrence of arabia. These old films with little budget or set were amazing at composition and the first time i checked this shot out i was blown away by how a guy on a camel and a rock connected by a cast shadow could compose one of the strongest images with little to no budget or set needed. There are a lot of things going on throughout this film especially when it comes rule of odds and 123 scale diversity and repetition. Lawrence of Arabia, Planet of the apes< one upon a time in the west, to me are like classes on how to do ten times more with 100 times less and help show how little you need if planned out to create a successful image reminding me of harvey dunns comment of : When you add interest to an image you Remove interest from it!

Once completed without research break down the image to the simple fundamental rules you are familiar with. Don’t cheat and look them up before hand… just get the image in your head sketch it out and break it down.

This is where you need to research and go to work.

Please choose 1 film 1 photographer 1 artist and collect at least 20 images.
It would be awesome if you did this by watching the film or participating rather
than google because google will do alot of the work for you. The idea is to see
how good you are at spotting great shots then breaking them down finding as
many design rules as you can. This is just a simple exercise to increase our
Composition IQ and build instinct

A bit late but here it is. The Dark Knight shot I liked the most.
Next stop: 7 Samurai or something from Tarkovsky.

Here is another one. I think I could break it even more but to be honest I’m tired and my brain is shutting down

Oh yeah, I took your list. Went through HEAT selecting my favorite shots then googled my way and found the stuff you had on yours. Bruce Stroia pointed out various effects you had on there to me.
Very interesting stuff. Now to do a breakdown of a couple of compositions next! - link to high res: https://drive.google.com/drive/folders/1WQWPpsTbMYyiO3fbl609Rj801pVuyZPk?usp=sharing

More Later. Here’s the beginning breakdown of one of my own pieces. Focusing on stuff I’ve become aware off thanks to this thread.

Sketched it from memory then looked up the movie shot

I really get a kick out of those coming of age urban fantasy adventures (E.T., IT, Stranger things, Stand by me, Goonies, Tales from the loop, October Sky ++). To take the lessons learned from the composition studies with me in the future I applied the lessons onto this personal piece. Next step would be to plan out the elements more in detail, Referencing HEAT (Maybe a strange combination).

Final Composition - The kids having left their camp on a camping trip decide to explore the local sewer. Adding a third kid in a strategic location wouldn’t be a bad idea.
Next step would probably be to rough out the scene in Maya (Mostly to be able to fill the bridge with a lot of lovely repeating elements in perspective, To give the picture a nice design rythm).

This shot from the X-Files has no good reason for being there. It seems cool for the sake of cool, but has always captivated me on a deeper level. Through analyzing it, I now believe this to be the crux of Mulder and Scully’s quest for truth in that episode.

In the scene, Scully is trying to convince Mulder over the phone that information from this man is the truth. During their dialogue, there’s a cut to this man simply standing across the way from Scully. It’s eerily powerful as we don’t know his true intentions… which are mirrored by the details of the scene being literally shrouded in mystery and framed with repeated caution. There is no escape as we’re guided towards him. His shape language is strong and stable but also dangerous. The framing brings us into his world… which is slightly off axis and uneasy.

Further down this visual design rabbit hole, (and rather abstractly) I relate the left and right symmetrical door frames as Mulder and Scully… being lead through the wide open door… directly to him and his answers.

It all supports the plot perfectly.

This is a thing of beauty keep it up guys. This is the kind of content i feel has been missing.

For everyone else jump in! 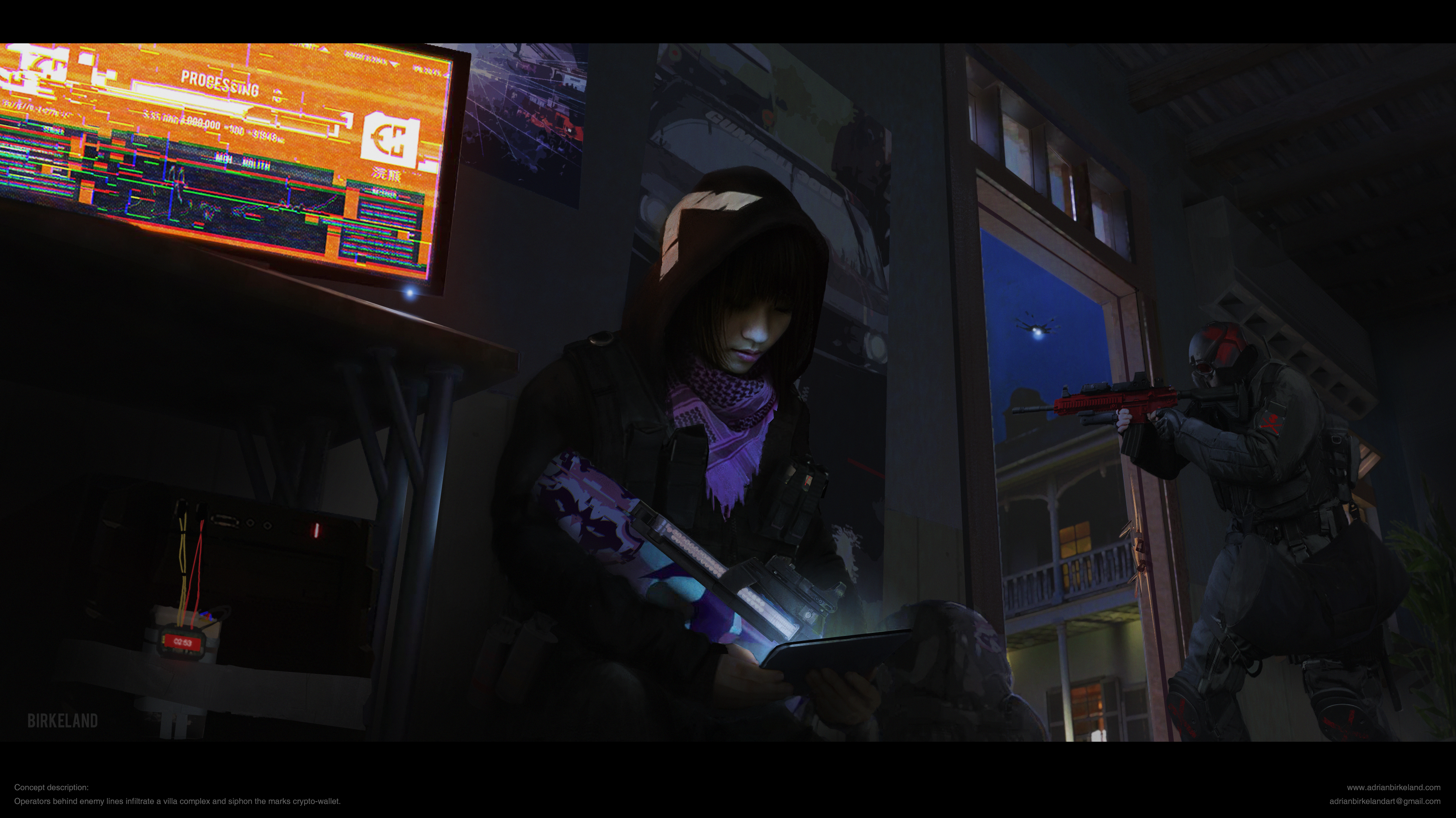 the_hack4K_Designed_updated.jpg3800x2134 5.51 MB
The story sketch I made for it. I would always start texturing up and finishing this rather than figuring out this part and then doing a Maya 3D of the scene or such before. 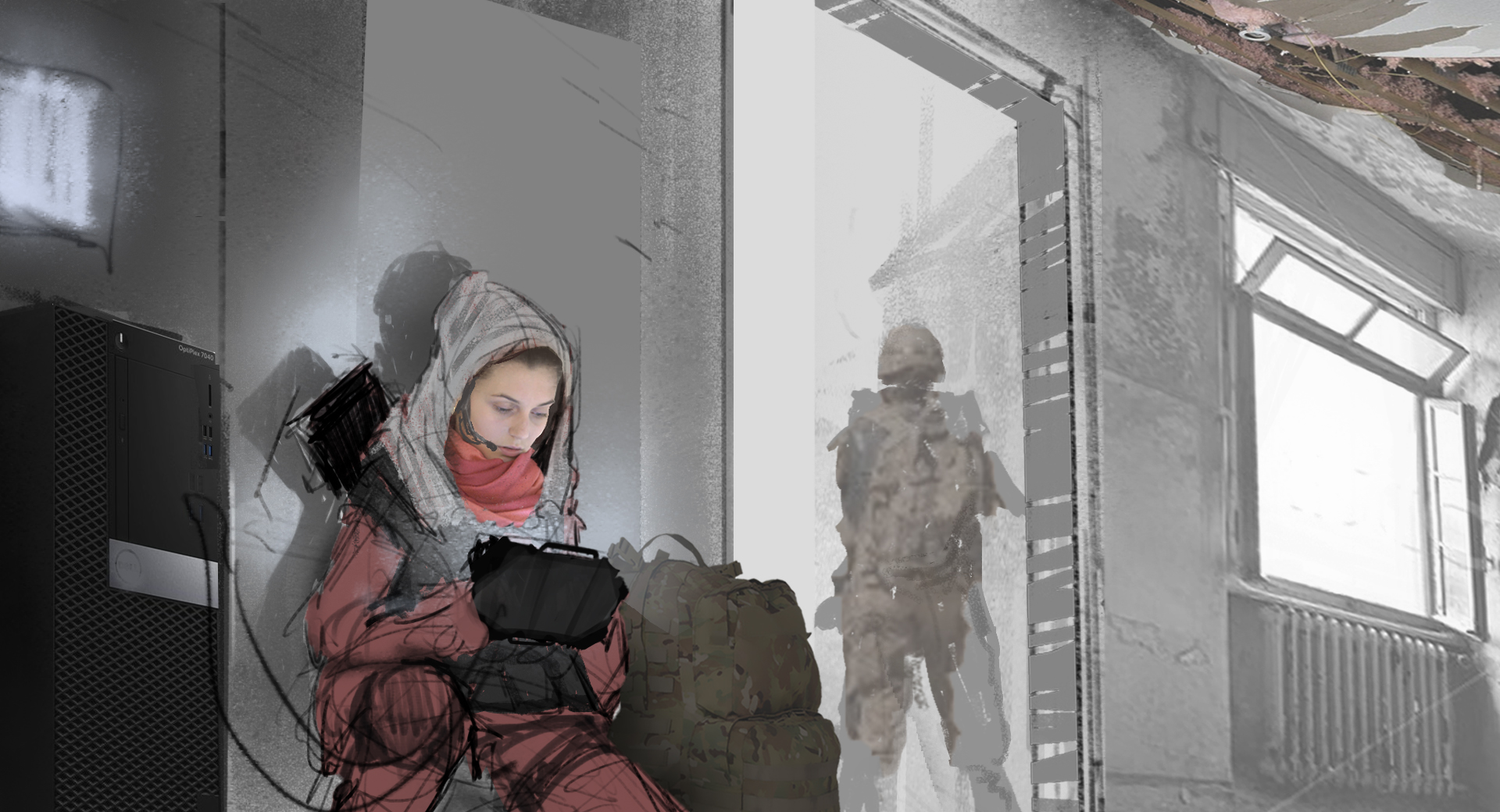 I would like to ask for some feedback about this composition: 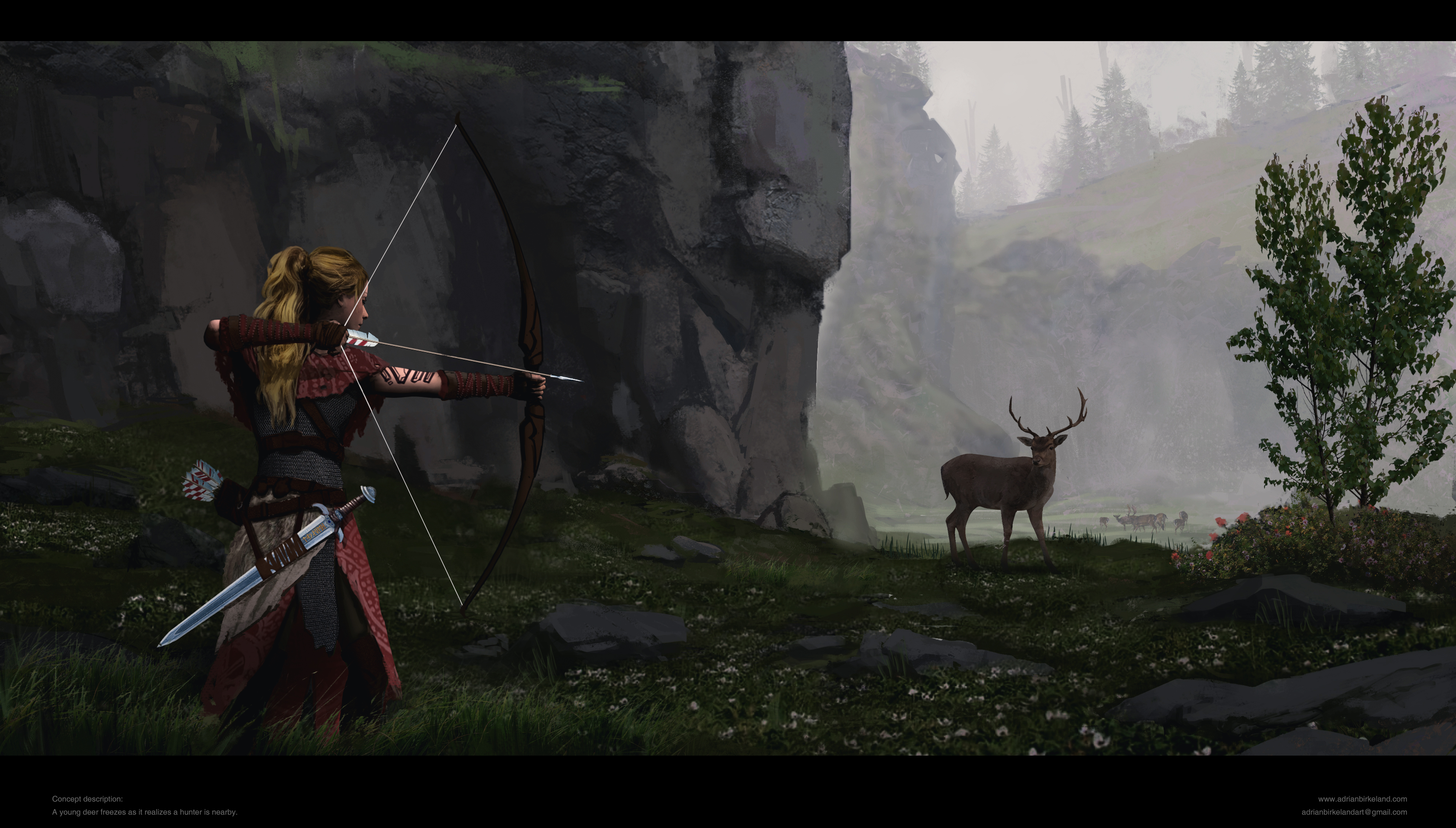