Good to see you back SalamanderCoral! Where have you been?

thank you very much for the nice welcome, supervlieg:)
i was very busy in the last few month and had hardly ever time for sketching… what a pity!
i hope, i’ll grow better…

best wishes and so long
Salamander

keep it up the next years.

I have absolutely NO order in my picture files.

[edit] Gah, the picture in the bottom left corner was an earlier version of one of the other sketches, please disregard.

Lovely… To see all these sketches together just makes my day!

Thank you! I just noticed that I added one too many though! argh! I have to edit.

Great work Enayla and FridayEve. Look forward to seeing more of your work!

Oww Redfrog! your works have a really nice style! I am a fan of you! Keep posting your sketchs in DSG!

As you can see quantity, not necessarily quality. I count 154.

That’s true DrawMonger, but practise makes perfect … and I can see a lot of people have evolved in their artwork…thanks to this DSG!

Mine is only 14 pics. That’s good since I just joined. I just want to contribute. Aie, Squibbit, where’s yours? 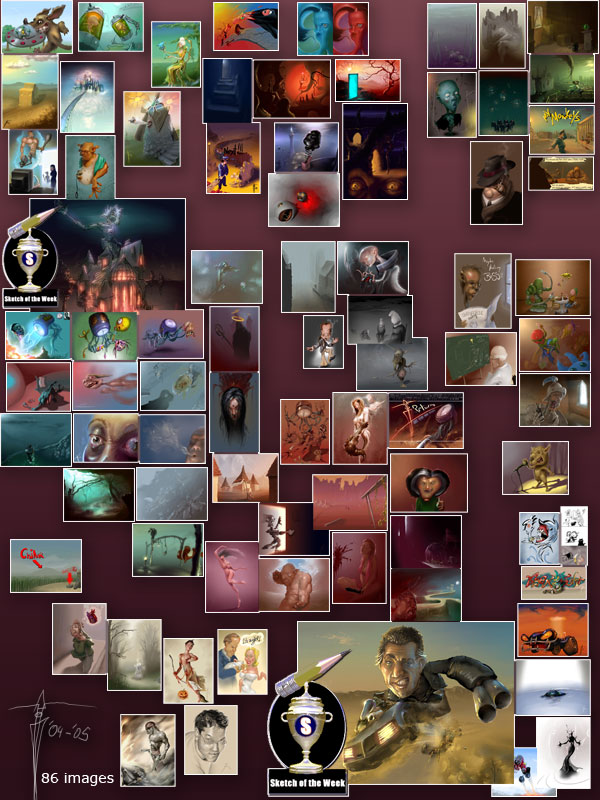 There a lot missing for some reason, I thought id backed them up but apparently not

well, I think there are some missing. i´m a disaster

ZOUNDS! So far, for most sketches we have a tie.

With 154 sketches each are: IlikeSoup and DrawMonger! Way to go guys!

And the quality of all this work is astounding - especially to view them all at once like this. WOW!

wow! its just incredible so see everyone’s sketches together! Everyone should be proud…

so anyway, here are 36 of last years sketches that I found on my disorganized shambles of a computer. I have about 27 others that Ill post later. so thats 63.

edit: here are the other sketches that I found-

I haven’t participated that much ^^’’ only 11 sketches so far.
But it was fun

I’m currently in the waking up phase, which commonly means “Do Not Write Anything People Might Read”. But I don’t care…I can edit it later, no problem.

(edit)
Looking at the combined work of a single person/artist brings out a quality that sometimes doesn’t even come across all by itself. I’m fascinated on how brilliant some people’s collections look, while I don’t remember ever having felt much about an individual image of them. Stunning. Nothing new, I’m sure, but I also believe that you all should be damn proud. I’m looking at my stuff I must say that it’s obvious how much I was fishing around into so many different directions…that was clear long before, but looking at them altogther seems so inconsistent, chaotic. Look at Octothreat for example, although one or two images really drop out, it altogether looks highly consistent in style and somehow evolving in execution (even there clearly doesn’t seem to be an order). Again, looking at Enayla’s…straight up thumbnails of an art gallery for fantasy geeks and juxtaposers that have some real money to spend.
Also some get pulled up by the sum of their work, others seem to have more sporatic spikes of genius and seeing them all doesn’t do justice to their occasionally thrilling brilliance…hihi…alright, maybe I edit that out?!..or maybe I edit out that I edit that out? Or maybe I go have a friggin coffee now…yeah, that’s it!

KICK BOOTY WONDERFUL to see this all! THANK YOU and thanks for the idea of the thread in the first place! I like it endlessly more than portraits! You have to store these images somewhere very very save! I’ve always loved your ‘Evil Twin’ one, Goro. I wanna be like you, obedoobedoo!