I’m trying to create something along the lines of what I see here:

However, I’m having a tough time replicating the glow effect. I’ve tried to use the “Glow” render effect (not “Object Glow”) but I’m having some issues.

I’m noticing that there is some flickering that seems to be primarily due to the grid on the plane. I assume that this is because of aliasing, but that’s not the only problem; the glow itself seems to be jumping around, especially near the base of some of the pyramids. Finally, the glow seems to taper off as the gridlines approach the edge of the frame. Here’s a video demonstrating the issues in the render:

How can I make the pyramid and gridlines glow while avoiding these issues? I have attached my project file below:
project.zip (177.8 KB)

OK, I downloaded your scenefile.

From the file I see you have R19 Studio so you’d be far better off doing this by using sketch and toon like Beeple did in the original example. Create a subdivided plane and render the wire frames with plenty of anti-aliasing.

Then do the glow effect in post. You might also render out object mattes and a depth channel to fade the grid pattern like the original too.

I can’t test this for you at the moment with your actual file, but here are 3 Cineversity videos on the subject of Anti-aliasing and MIP/SAT Scaling that will guide you well and help prevent flickering. I would assume some, if not all the flickering in the glow, is happening due to aliasing issues that then have the glow applied and therefore the glow is also affected as it is a post effect.

Thank you, this was helpful. While increasing the aliasing and playing around with the MIP did eliminate most of the flickering, I still seem to have an issue with the glow itself jumping around. I’ve uploaded the newer version here (compare it to the first version):

This version was rendered with these settings: 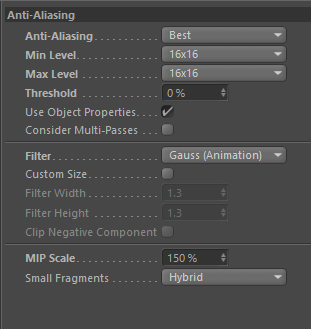 I don’t quite understand why the glow is still jumping around so much where the base of the pyramid touches the plane. Do you know what could be done to fix that?