3ds Max: How to apply textures to generic geometry-only model?

It is delivered in bare bones geometry, our job is to assign the 4 provided textures in order to make it look as follows: 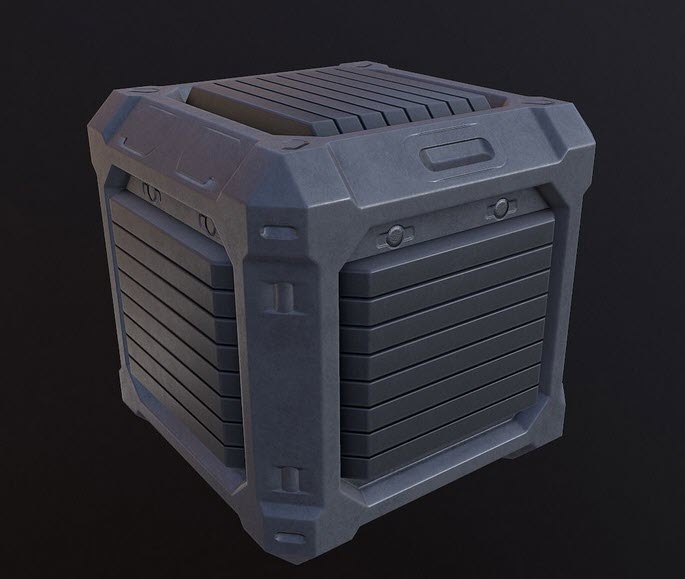 [To be continued due to Draconian limits imposed on new users]

This is what I have done:

In 3ds Max, I used the Slate Material Editor and selected “Get All Scene Materials”: 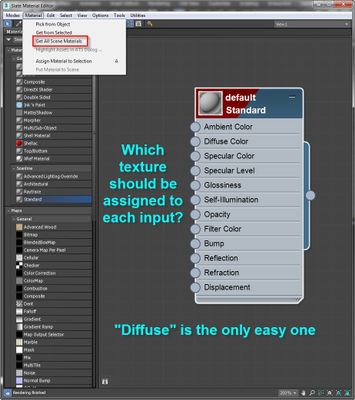 [Not a very welcoming site to new users]

The question should be obvious: What do I plug where?

There is a “Normal” map, with no obvious place to plug. The topology that you see below is that only one that has an effect: 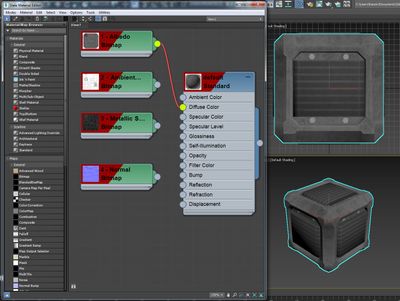 Maybe I am using the wrong material and need to locate one which has the proper inputs, such as “Normal”?

What other maps do you have, this can help with setting up your material properly.

It also helps to know if this is a Metallic setup or a Spec/Gloss setup. Also which render engine you will be using.

The normal map goes into the Bump slot through a Normal Bump node as below: 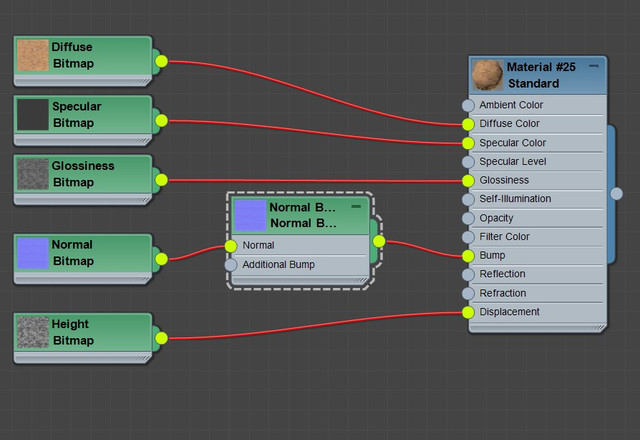 Make sure only your Diffuse and Specular map are using Automatic Gamma on import. All other textures should be using Gamma 1.0 override on import, as below:

What other maps do you have

They are listed here:

I have been making much progress, and your instructions are certainly helpful.

It also helps to know if this is a Metallic setup or a Spec/Gloss setup. Also which render engine you will be using.

No rendering at all. This is a self imposed learning exercise. The original was designed under Cinema 4D and there is a Maya version as well. I used the “Send to 3ds Max” Maya feature. Only one of the textures (albedo) make any effect. See below my minimal progress with this particular object. 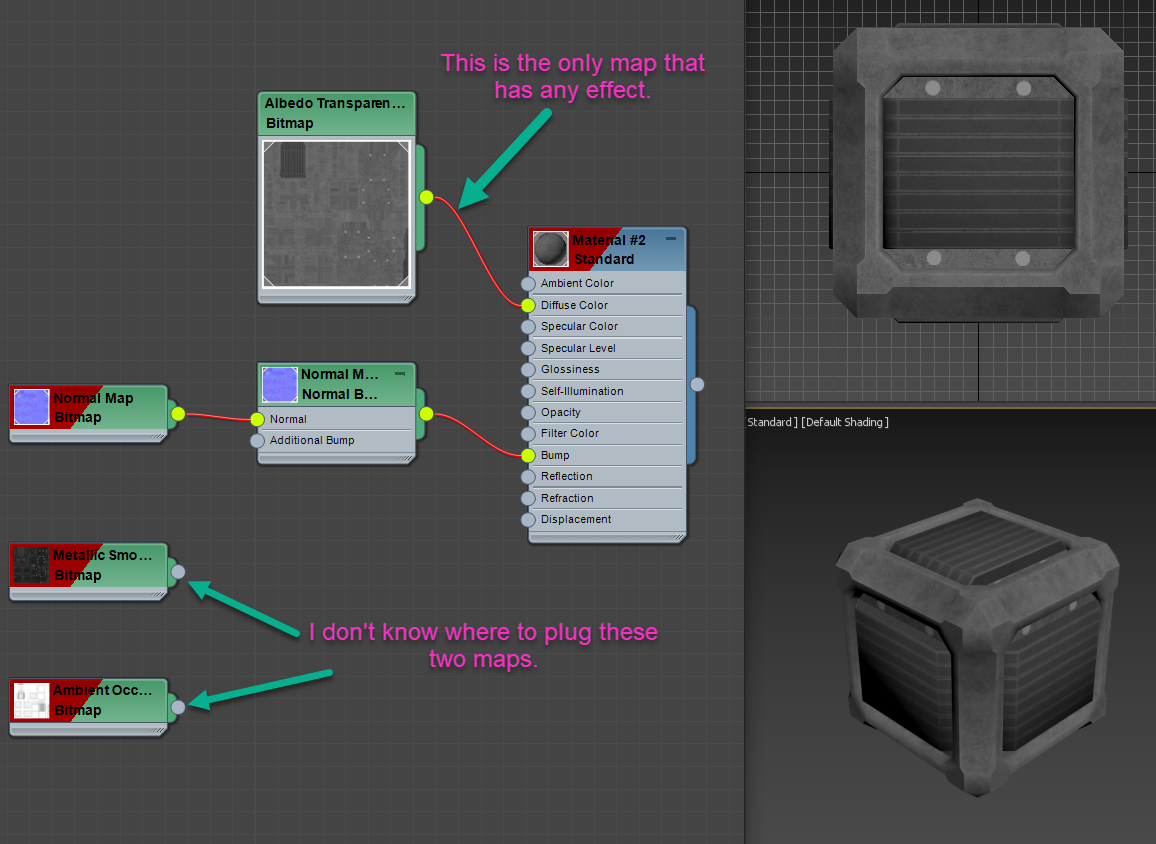 If I severe the Normal-Bump connection, nothing happens.

Ok well after checking the other thread you posted Drew pointed out that the diffuse/albedo is not normally called this “AlbedoTransparency”, which can create some confusion.

Also, this is a metalness workflow (not glossiness) so the fact there is no Roughness map is strange. This controls the ‘blurryness’ of the metal areas, without this your metal areas will be either 100% reflective or not at all.

You AO map should be Composited with your Albedo texture with a Multiply to create depth (usually known as a DIffuse map which contains both AO + Albedo).

I would definitely contact the seller of the product to be honest, it seems there are some textures missing from what you have received or has not been exported with everything that you need to replicate the material correctly.

Also note that you will not be able to replicate this either way in 3dsmax standard materials, you need to ensure you are using a render engine that is PBR Metalness supported such as Vray. Blender also supports PBR Metalness workflow.

If you can get the PBR Glossiness maps instead most render engines support these, as we have been using the Glossiness/Spec workflow for years in most 3D software and render engines. But this requires the creator knows how to output maps for the Glossiness workflow, and there seems to be quite some confusion amongst creators at the moment regarding correct PBR workflow from my own observation. If you are interested I have a blog post about this but unless you are using Vray/Corona its probably mostly useless to you other than a good read about how the maps work.

James: I am a software engineer who until recently knew nothing about 3D but am now hooked. I am teaching myself this fascinating technology. 3ds Max, Maya, Cinema 4D, Blender, Rhino and SolidWorks.

What I do is look for interesting (not too simple, definitely not too complex) free models on the web. I have paid Freelancers for some models as well.

I have noticed that the free models out there sometimes leave much to be desired. In many cases they display a really professional rendering but only provide minimum files.

unless you are using Vray/Corona its probably mostly useless

These are the two standard rendering engines that I have adopted for my project:

Being cost sensitive (Free Open Source, Not for Profit) I had decided to go with V-Ray only. However, after a “hired gun” in Freelancer delivered the model of the candy machine below, I was so impressed that I added Corona. 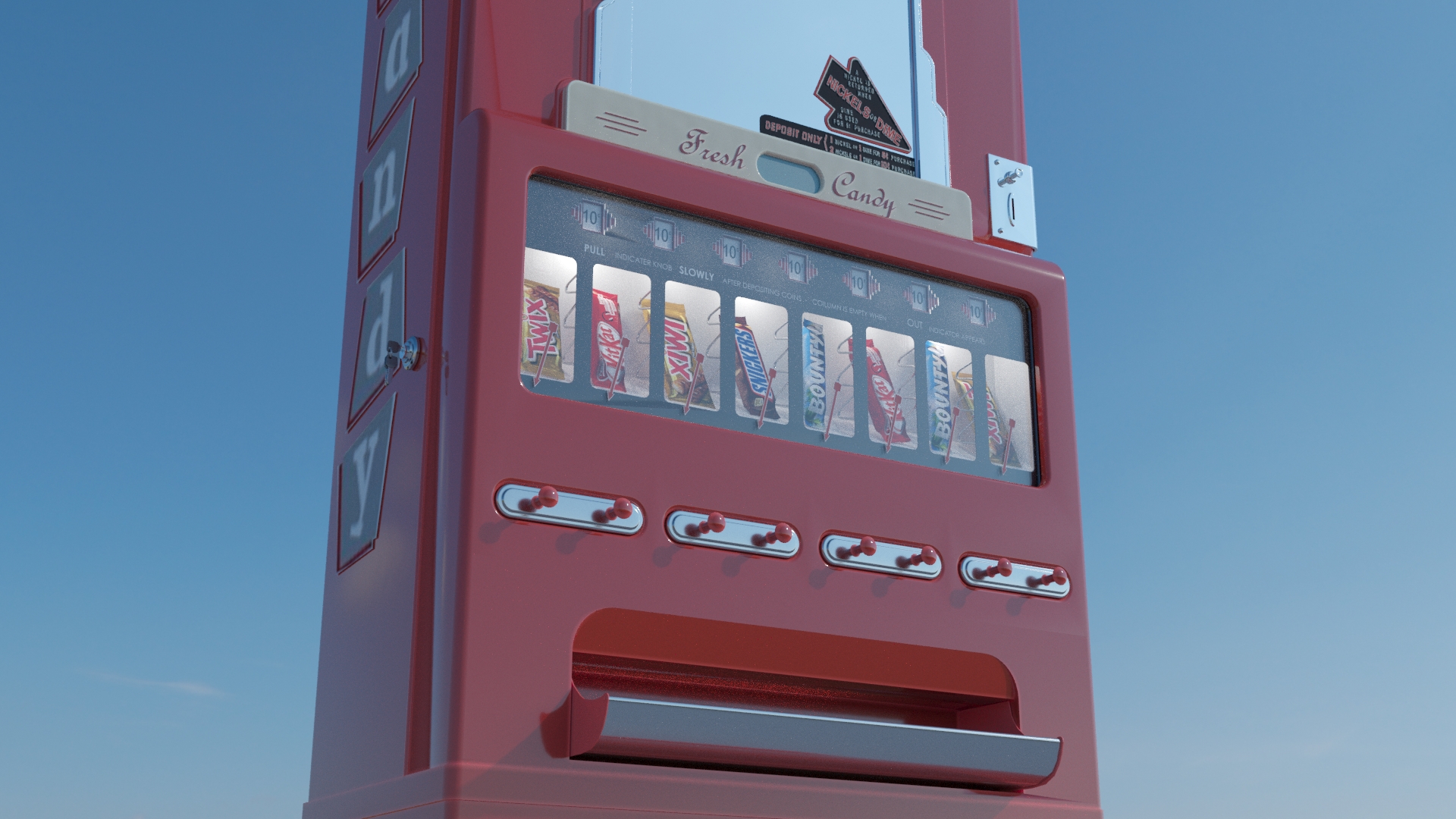 Ramon, sure thing I understand your interest, I have been doing this 10 years and im still hooked

If you need some good examples I have plenty on file if you would like something to get your feet nice and wet, just PM me and Ill be happy to share some basic models with correct setups for you so you can get a better understanding of how things work.

I also use 3dsmax, c4d, rhino and blender.

if you would like something to get your feet nice and wet, just PM me and Ill be happy to share some basic models

That would be great. Will do.